With Rahul Gandhi keen on promoting young blood, Gehlot stuck to the party line throughout the election campaign of not asserting himself over the state Congress chief Sachin Pilot 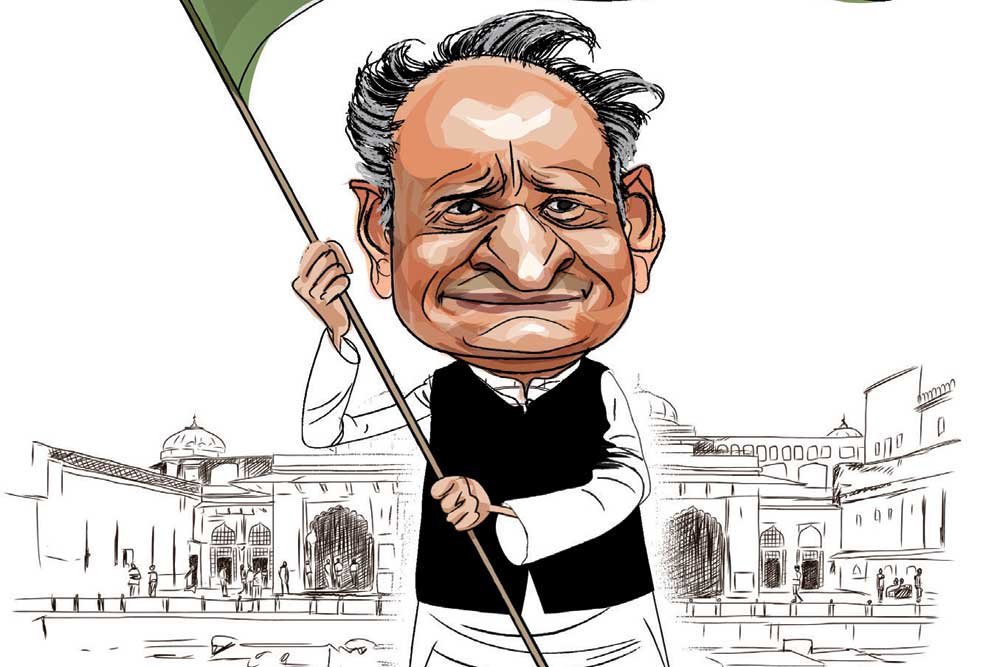 SON OF A magician, Congress veteran Ashok Gehlot has often been quoted as saying that if he had not become a politician, he would have followed in his father’s footsteps despite his degrees in law, economics and science. On the Rajasthan government website, his hobbies listed include ‘magic, journey and sightseeing’.

Sure, the Jodhpur-born two-time Chief Minister of Rajasthan (1998- 2003 and 2008-2013) has over time pulled off several magic-like tricks in politics that have helped him rein in rivals and rise rapidly in the party, especially in the 1970s and 1980s when Indira Gandhi and son Rajiv were party chiefs. Currently national general secretary of the Congress in charge of organisation and training, Gehlot looks set for power in Jaipur. If appointed, it would mean a sure- handed politician at the helm of a government that has to play a pivotal to his party’s interests in the run-up to the 2019 General Election.

Author and journalist Rasheed Kidwai credits the 67-year-old with setting up Dilli Haat, opposite INA market in Delhi, when he was junior tourism minister several decades ago. Run by the Delhi Tourism and Transportation Development Corporation, it continues to be an attraction even decades after it was set up. Imaginative and hardworking as Chief Minister, Gehlot earned plaudits for his skilling and drought-management initiatives.

Gehlot came into prominence within the Congress at a young age. It has been said that he was spotted at a relief camp in the Northeast during the 1971 East Bengal refugee crisis by none other than Indira Gandhi, who was impressed by the 20-year-old’s skills in working with people and tackling new challenges in trying situations. There was no looking back for him after that. His rise in the student wing of the Congress and later within the main organisation, thanks to her blessings, was remarkable.

Gehlot then came under the spell of the controversial Nehru-Gandhi scion Sanjay, known for his love of fast cars and unfriendly stance towards the media. The erratic yet powerful Sanjay, though, liked the young Gehlot as he went ahead building the organisation by recruiting young blood to take on political rivals who were gaining in strength around the time. Gehlot stood to benefit enormously from this association that started with a meeting in Indore.

Rewards came pouring in for Gehlot when he was promoted within the party and the Central Government by Rajiv Gandhi, who was forced to plunge into politics after Sanjay’s untimely death in 1980. Gehlot became Rajiv’s point person in Rajasthan in no time. By then, he had already been elected to Parliament from Jodhpur. He would continue to be a lawmaker for several terms, starting with the seventh Lok Sabha in 1980. The same decade, he became a Union minister under Indira Gandhi, and later under Rajiv Gandhi.

After Rajiv’s assassination at the hands of terrorists, PV Narasimha Rao picked him to join his council of ministers in the early 1990s. Gehlot earned a name as an innovative administrator during this period. He continued to be a Member of Parliament until the late 1990s, when he shifted base to Rajasthan as Chief Minister.

Luck and an ability to pacify recalcitrant allies have won him admirers. He has also managed to endear himself to the people of the state, which typically throws out the incumbent government every election, through a series of populist schemes in the past that included subsidised medicine distribution and job schemes.

Gehlot, who has weathered many a storm within and outside the party, including corruption charges, remains loyal to the first family of the Congress and remains within the inner circle of the party. Having been close to Rahul Gandhi’s mother Sonia Gandhi, Gehlot enjoys a good rapport with the Congress president as well. Both knew each other from the time of Mrs Gandhi. Gehlot used to entertain Rahul with jugglery and magic tricks, it is said.

Given Rahul’s emphasis on young blood, Gehlot stuck to the party line throughout the election campaign of not asserting himself over the young state Congress chief Sachin Pilot, who was also in the reckoning for the post of Chief Minister. Indications of Gehlot being the first choice of the high command were clear in case the party secured only a close victory– and charges fly from a section within that he wanted the gap with the loser to be narrow for that reason. Whatever the case might be, the resolve of the Congress leadership now is to use him to fight Modi’s influence next year in a state that elected BJP candidates in all its 25 Lok Sabha constituencies in 2014. It is his long experience that gives Gehlot the edge. Expectations at 24 Akbar Road are high.

The elemental intensity of Manoj Bajpayee makes him a class act on the big screen and a formidable force on OTT. The art and attitude of an original