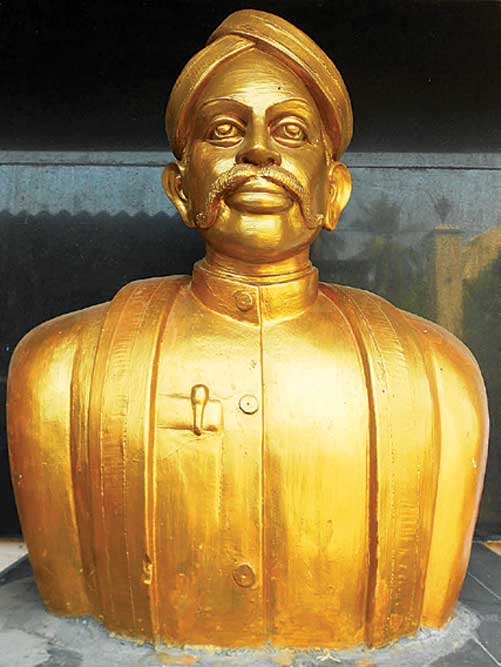 A bust of VO Chidambaram Pillai in Tuticorin


Madras was regarded as a “Model Presidency” and as the “benighted Presidency or a slept hollow”. Historian David Washbrook says that “not even a single anti-British dog could be seen in the streets of Madras.” Madras was the first territorial acquisition of the British government, but was called a “benighted” place in the nationalist movement. However, long before the Revolt of 1857, the people of Madras were agitating for their rights and representation. Scholars who have worked on the national movement have ignored the anti-British struggles in the Madras Presidency. Yet, the earliest revolts took place in the south, long before 1857. It is worth recalling them, at least in this 75th year of India’s independence.

Maveeran Alagumuthu Kone from Kattalankulam in Tuticorin district was an early freedom fighter against the British presence in Tamil Nadu. Born into a Konar family in Ettayapuram, he was defeated in battle against the army of the British and Muhammad Yusuf Khan (Maruthanayagam Pillai before his conversion). He was captured and executed by the British in 1757 after a fierce battle.

In 1775, the Madras Council decided to send the Ninth Battalion of native infantry stationed at Tiruchirapalli to Bombay, in response to a request from the Bombay Council. The sepoys refused to go and the acting commandant, Makhdum Sahib, and his associates were blown away from the mouth of a cannon. In 1795, the sepoys of the Madras army refused to attack the Dutch in Ceylon (Sri Lanka). This resulted in their immediate death.

The most famous opposition to the British in Madras Presidency was by the Palayakaarars (Poligars in English), independent entities who protected the lives and properties of the people of their paalayams (regions). The East India Company (EIC) coveted the taxes they collected. The revolt in 1799 by the Palayakaarar of Panchalankuruchi, Veera Pandya Kattaboman, is well known in Tamil Nadu thanks to Sivaji Ganesan’s film by that name. But there were others too: Puli Thevar of Nelkattamseval, Chinna Thambi Varaguna, Palayakaarar of Sivagiri, and the Kallar tribes of Madurai. They all waged battles against the British and ended their lives in the indiscriminate public hangings and massacres by the British. Dheeran Chinnamalai, Palayakaarar of Palayamkottai in Kongunadu, rebelled against Hyder Ali and the British. He won the battle but was finally captured. He and his brothers were imprisoned at the fort of Sankagiri. They were asked to accept British rule but refused. In 1805, they were hanged at the top of Sankagiri Fort.

When Muthu Vaduganatha Periyavudaya Thevar of Sivaganga was killed by the EIC in 1780, his wife Rani Velu Nachiyaar took eight years to plan her revenge. Helped by the Marudhu brothers and Thandavarayan Pillai, she attacked the EIC in Madurai on Vijayadashami day.  Her commander Kuyili, who headed a 4,000-strong battalion of women, covered herself with oil and ghee and jumped into the British ammunition depot, blowing it up and becoming the world’s first suicide bomber. The Rani defeated the British and regained her kingdom.

The Marudhu brothers, Periya Marudhu and Chinna Marudhu, were probably the first to appeal to the people of India when Chinna Marudhu declared in 1801: “The castes, nations, Brahmins, Kshatriyas, Vysyas, Sudras and Musselmen [Muslims] that are in the Island of Jamboo/in the Peninsula of Jamboo Dweepa this notice is given. Wherever you find any of the low wretches [Europeans], destroy them and continue to do so until they are ‘exported’. Whoever serves the low wretches, will never enjoy eternal bliss after death, I know this.” In the Second ‘Poligar’ War, a confederacy of the Marudhu brothers of Sivaganga, Gopala Nayak of Dindigul, Kerala Varma of Malabar, Krishnappa Nayak and Dhoondaji of Mysore, and Oomaithurai, brother of Kattaboman, inspired thousands of men to rebel. However, the superior weapons of the British won the day and the rebels were wiped out. “So savage and destructive was the death and destruction wrought by the English that the entire region was left in a state of terror.”

Long before 1857, the Indian army stationed in Vellore rebelled against the British in 1806. The Hindu sepoys were prohibited from wearing their religious marks on their foreheads, while the Muslims had to shave their beards and trim their moustaches. Their turbans were replaced by a hat! The rebels killed 14 officers and 115 men of the 69th Regiment. However, a relief force of British gunners and cavalry arrived from Arcot to Vellore, blew open the gates, and quelled the rebellion. Over 100 captured sepoys were executed by blasting them with canister shots. But the laws regulating Hindu religious marks and Muslim beards were withdrawn.

VO Chidambaram Pillai founded the first Indian-owned shipping company in British India, the Swadeshi Steam Navigation Company. Its goal was to reduce British monopoly over shipping. However, the company had to deal with a hostile British government and British competitors. Eventually, the company was liquidated and Pillai was thrown in jail. Robert Ashe, collector of Tirunelveli, was responsible for closing VO Chidambaram Pillai’s swadeshi shipping company and arresting him. Ashe was assassinated by young Vanchinathan, a shishya of VVS Aiyar, in 1911.

Vanchinathan then shot himself, leaving a letter “dedicating his life as a small contribution to my motherland.” Yet, while Bhagat Singh is feted for shooting dead a British police officer, nobody remembers Vanchinathan who assassinated a district collector.

VVS Aiyar was influenced by VD Savarkar and became a revolutionary. He was involved in the plot to assassinate Ashe. Aiyar carried out militant resistance to British rule. As a result, he was forced to seek exile in Pondicherry. In World War I, when the German ship Emden entered the Madras harbour and blew up two oil tanks, damaged three more and a merchant ship, the British government blamed the exiles in Pondicherry, and urged the French governor to deport Aiyar and his companions. The French passed vague charges against Aiyar and the other revolutionaries but did not convict them.

Contrary to the belief that the south was not involved in the Revolt of 1857, secret meetings were held and plans were prepared from as early as January 1857 for a war against the British in North Arcot district. 1,044 sepoys of the Madras Army were court-martialled for their participation in the 1857 Revolt. Madras, Chingleput, and Coimbatore districts were declared as disturbed regions. In Thanjavur, Sheikh Ibrahim, a revolutionary, was convicted in March 1858. Arunagiry and Krishna led the Chingleput uprising. Alarmed by the insurgency, the two were caught and put to death.

Gazulu Lakshminarasu Chetty was the first public agitator in the Madras Presidency who took a moderate route to protest against the British government. In 1844, Chetty founded a journal called Crescent to defend the traditional Hindu rights that were threatened by the proselytising activities of the European missionaries. Besides exposing the unlawful conversion activities via his journal, Chetty formed an association that included the Hindu elite and masses. The Madras Mahajana Sabha, or the Madras Native Association was among the earliest associations to agitate against Western methods. He agitated for local self-government to achieve a responsible government in India and achieved the Towns Improvement Act X of 1865 and the Local Funds Act IV of 1871, which reduced government intervention. The Madras Native Association, established by Gazulu Lakshminarasu Chetty in 1852, was the first Indian political organisation in the Madras Presidency.

Subrahmanya Bharathi was a Tamil poet and writer and a prodigy. Bharathi participated in the historic Surat Congress in 1907 along with VOC Pillai. One section led by Tilak preferred armed resistance over the moderate approach preferred by other sections. Bharathi and his Tamil friends openly supported Tilak, who believed in armed resistance against the British. Bharathi was virulently anti-British and wrote in New India and Swadesamitran, attracting the attention of the government, which issued a warrant for his arrest. He fled to the French territory of Pondicherry. He published and edited the weekly journal India, Vijaya, a Tamil daily, Bala Bharatham, an English monthly, and Suryodayam, a local weekly in Pondicherry. India and Vijaya were banned in India in 1909. He entered India at Cuddalore in 1919, but was immediately arrested, until his release by the advocacy of CP Ramaswami Aiyar.

The British were ruthless and violent against the rebels. Some men were shot from the mouth of cannons, some hanged, some shot with guns and rifles, and some deported. It is sad that the south has been ignored in the history of the freedom movement when so many lives were lost and so many were sacrificed. Yet, their stories have been lying in mouldy piles in some musty archive for 75 years. Finally, the government of India is acknowledging their sacrifice in this 75th year of our azadi.