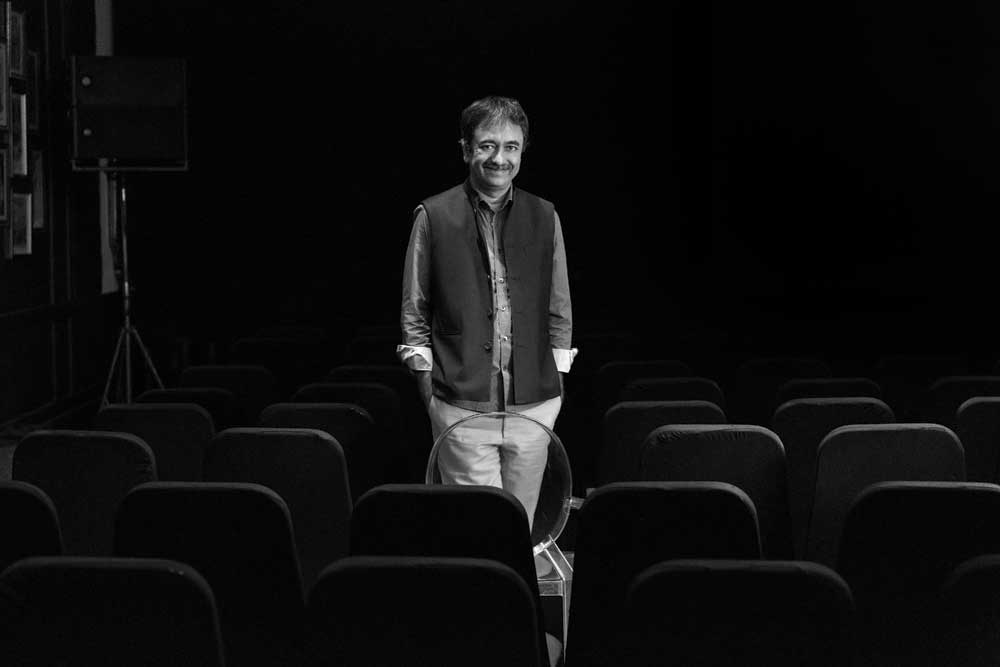 RAJKUMAR HIRANI’S workspace is an ode to his cinema. You step in and you’re greeted with Peekay’s transistor. Also sitting proudly is Munna and Circuit’s yellow scooter. Within one of the cabins are the colourful butt- shaped chairs of the three idiots. There are hand-painted caricatures of each of his characters. And watching over all of this is a life-size cardboard statuette of a smiling Charlie Chaplin suspended in the air. Hirani himself looks no less Chaplinisque, in his appeal if not appearance. He’s a happy man, who makes happy films. Hirani’s cinema, which began with Munnabhai MBBS 15 years ago, is so intimately steeped in India’s film ethos that there’s hardly a Bollywood patron who doesn’t revisit his work.

He has made five films in the past 15 years, the kind that will be watched by the next few generations, and still be relevant. His central characters mouth life lessons as easily as telling a joke. He uses humour as a tool to break mindsets that set boundaries and hinder progress; and if there is still any such thing as cinema changing the world, his work would be among the exemplars.

His latest film, Sanju, is his first biopic and on a man who isn’t just one of India’s most popular actors but also among the most troubled. Sanjay Dutt’s life seems like too much of a dark space for Hirani to explore, given his ecosystem of films that are essentially a cape of hope in a largely cynical world. We speak to the filmmaker about why he picked this story and everything else that makes him one of India’s most successful and best loved filmmakers.

Two of Sanjay Dutt’s most popular films (Munnabhai MBBS and Lage Raho Munnabhai) have been made by you. Was it empathy then that drove you to tell the story of his life?

Not at all. All I am interested in is great content. It could come in somebody staying at the North Pole or in a little corner of Mumbai. If he has an interesting story to tell, I will chase him down to get it. Sanju just happens to be a story about a man I know, it has nothing to do with whose story it is, but what it entails. Sanju has led an unbelievably dramatic life, and it just fell into our lap. His life is such that if you give it to five different filmmakers, they will all make it differently. If it goes to somebody who likes thrillers, he would give it an edgy colour. I saw a father-son story here. A friend’s story. And I think people don’t know about that, so that’s what attracted me to it.

Your central characters have always been somebody we could look up to. Wasn’t Sanjay Dutt’s battle with drugs, alcohol and crime a dichotomy for you?

Yes, definitely. Most stories are about achievers. Most films will be about an underdog trying to reach somewhere. For me this is the story of a survivor. The things he has done are far from heroic. So, as writers, for Abhijat (Joshi) and I, the challenge was to tell a story of someone like this and still engage people. One of our friends who saw the film came to me and said, “I will show this to my daughter.” Hopefully, if he was inspired to do so, others will be too.

You spent 25 days and nights with Dutt listening to stories about his life that few know. What was it like?

It was like a fairytale. Abhijat and I felt like dwarves, like we haven’t lived at all. How can a man deal with this much drama in one lifetime? When he was taken to rehab in the US, the doctor gave him a list of 200 drugs and asked him to mark the ones he has done. He marked every single name. The doctor looked at him and said, “How are you alive?” Drugs, women, court cases, guns—you name it and it was there. Inspiration can come from the most unexpected places and this one, I feel, is a life to learn from.

Was it difficult to not judge him?

Some rules I have made for myself—I don’t judge people. At least I make a conscious effort not to. You will discover as you grow older, with cynicism and judging people, the only person who gets troubled is you. We don’t know the battles they are fighting. There are so many people I know the world adores. Actors. But I don’t ever want to be in their shoes. Buggers are troubled yaar… they are going through hell. And there is no reason for me to glorify Sanjay Dutt’s life. I wasn’t an out-of-work director and neither is he a friend or a family member I had to please. I could have done Munnabhai 3, which would have been a far bigger film. But the content was so fascinating that I dropped everything and made it.

How can a man deal with so much drama in one lifetime? Drugs, women, court cases, guns—you name it. Inspiration comes from unexpected places and Sanju’s life, I feel, is a life to learn from

Has this been your riskiest project? You did not have much control over the story as you had to stick to facts.

When I did Munnabhai MBBS, people said, “You are taking an action hero and putting him in a hospital… who will watch this?” Then Lage Raho… they said, “Who wants to propagate Gandhism in today’s time?” When I did PK they said, “Who wants to understand God?” But these have all been issues I feel strongly for. In that sense there has been some risk in every project. There’s no point if I just try to say what people want to listen to.

There is a lot of goodness in your films. Have you grown up looking at the bright side?

I’ve had a good childhood and huge influences. I had a very upright father. For him it didn’t matter who was big, small, rich, poor; he would go to the biggest guy and fight with him for the smallest things if he saw something was unfair. A lot of scenes in my film are from his life. The scene where Dutt saab at the railway platform catches hold of a pickpocket happened to my father. Someone had cheated him and he took him to the panchayat. They started hitting him but my father stopped them. He asked the guy to take a good look around him. One sells poisonous alcohol, one does insurance scams, one runs some corrupt truck business. He said to him: “You don’t want to become a chor like that.” Then he took bought him a railway ticket and sent him back to Raipur. Though my father is no more now, there’s a lot he left behind that we try to live by.

Is it true that Sanjay Dutt never turned up for your very first day’s shoot as a director?

We were supposed to shoot on January 2nd and Sanju suddenly calls me and says he will come two days later because he’s in South Africa. My whole world shattered. It was my first film and I had very meticulously put down a schedule and I felt like I will never recover from this delay. But then slowly you learn that in the long run, it all falls into place.

You are among the most successful filmmakers India has had. Does the number of people who watch your films still matter?

What matters most is how they like it. If you think of your favourite film, you won’t remember how much business it did. When Munnabhai released, someone called me and said people are clapping through scenes. I toured all the single screens in Bombay that day, looking at the smiles on their faces. It’s sad that the barometer we measure a film’s success with has changed over time. It’s money now. For me, the most important thing is if my film resonates with people.

There was a time when films would change the way people think. Do you believe cinema still retains that power?

I don’t think cinema can change the world, but it can definitely change individuals. When I made Three Idiots, I didn’t realise it’s going to resonate with so many parents and students that they realise that’s the life they don’t want. If I feel strongly about something, I try and say it through my films. I felt very strongly about religion and these fake godmen and I said that with PK. When someone says to me, “Our minds are preconditioned to believe things, and you gave us a different viewpoint to think,” I feel like I’ve done something worthy.

Have your perspective on film- making changed over the years?

Every film is like a first film. It gets harder because the world takes up a lot of your time. My first film, I had nobody to worry about. Now you have to work doubly hard. You have to feel you have pushed every bloody button and tried everything possible to make your point. You spend hours for every little sound effect and that exact music level. I try to maintain that passion even today. There is so much content and changing technology around that quantity often supersedes quality. But for me, even today, cinema is an experience. A film being played on the big screen is a gift and I try to create it with as much honesty as possible. 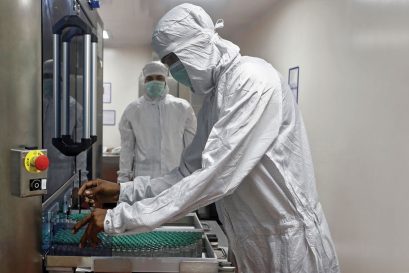 The Journey of a Vaccine 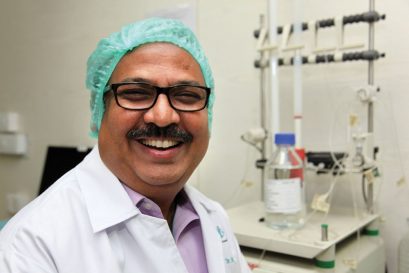 The biggest challenge is yet to come for Bharat Biotech 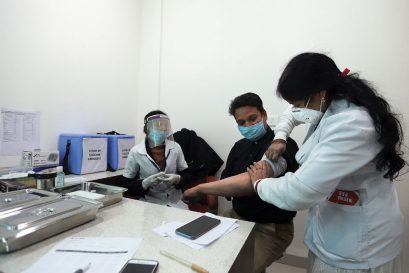 A Shot of Hope

In rolling out its mass vaccination programme, India expects to pull off the unprecedented