Wild Chicken and the Happy Isles of Oceania

In search of the elusive flightless megapode 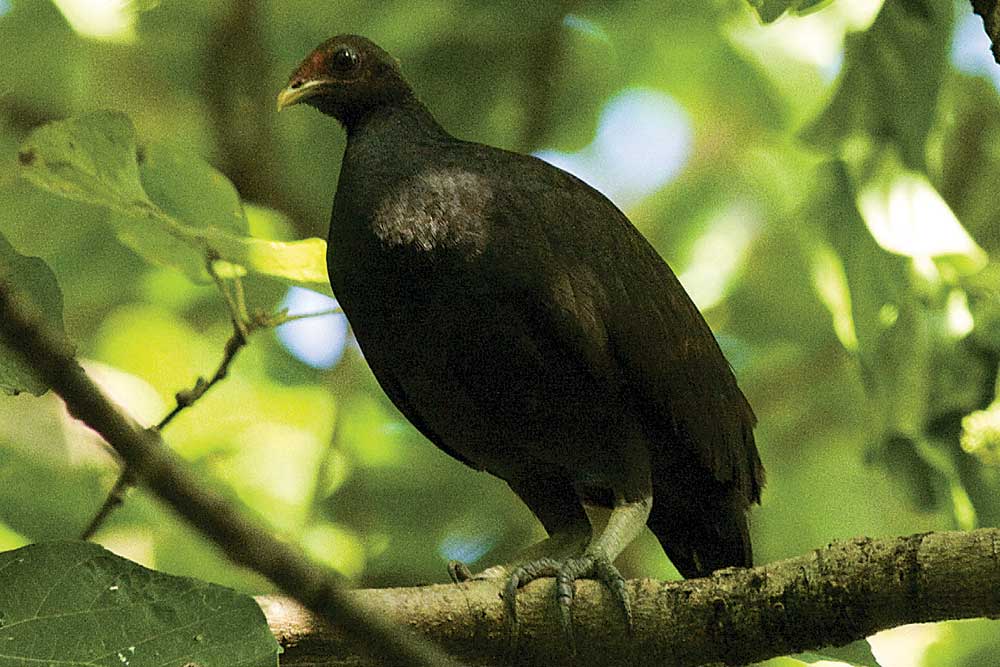 HONIARA, IN THE Solomon Islands, is the armpit of the Pacific, just as Paul Theroux thought it to be. Port Vila has a certain rustic elegance to it, Apia is clean and tidy, and Port Moresby is a bustling megapolis of unemployed youth. Honiara is only a row of shacks peopled by a desperate youth of indescribable poverty. There is poverty in India, in Africa and in Latin America, but there was certain desperation in Honiara that made my companion Kalie think of Haiti. “Dese people, them pore, maan,” he drawled shaking his head slowly in a bowed, defeated way, “Boy, dese people, them pore.” Kalie was still small-island Caribbean at heart despite his newly minted blue American passport. There might come a time, as I have found with immigrants closer home, that he too would become an American at heart, munching pizzas and platitudes with equal ease, but as of now he was an islander and his heart went out at the sight of the youth in Honiara. Under the squalor, the racial riots, the crime, the filth were a beautiful, generous and soft-spoken people who I found among the dark-skinned Melanesians from Guadalcanal, the even darker-skinned, frizzy golden- haired cousins from Malaita, and the fairer, plumper Polynesians from Renell and Santa Cruz. Scratch the surface and they were happy, carefree islanders. But the surface was hard, grimy and a nail-breaking scratch.

Mike met us at the airport. He had a four-stripe Customs uniform on with a shiny label that said ‘Upuwe’. But his head was held low and he drawled slowly and whiningly. “Meester Menon,” he called, “Pleese to wait here, Meester Menon, I have welcome for you and Meester Kelvin.” He left us at the Customs checkpoint and the fact that he was there saved us the long and laborious search that officials were conducting on what looked like massive seafood imports coming in with hand baggage of returning Solomon Islanders. We were there to train the Customs in wildlife crime enforcement and got ahead of that raggle-taggle line quickly thanks to Michael, but still had to wait for him to come with his small blue plastic bag. “Meester Menon, we have the welcome for you,” he said holding out a slightly faded lei of frangipani. I wore it and was immediately assailed by its sweet scent. I found it refreshing and very useful too. The ride into town in the small Customs van was hot, and if you opened the window to get a draft of air, the stench of rotting garbage floated in uninvited, much like in many parts of India. Frangipani under the nose was actually a great remedy. A daily replenishment would have been nice, but the good Michael, after dropping us off at the newly built star hotel of Honiara, did a disappearing trick over the weekend. I called him once or twice. “Meester Menon,” he complained, “I am with my family, Meester Menon.” I stopped bothering him and instead decided to spend the Sunday doing what Theroux had done 20 years before us. Meet Allan Kemakaze and head to Santo in search of megapodes.

Twenty years ago, Allan was a minister of housing. In the interim two decades, he had become prime minister, served five years, seen three riots, been sent to jail on corruption charges and was now speaker of the assembly. A tumultuous and yet, some would say, a politically successful career. I called him, as Santo was his preserve. According to kastom, that is. His two brothers Ataban, Mapo and he had the island carved out to themselves. His Sunset lodge was the place recommended by the efficient concierge at the hotel. The first time I talked to him he was driving. He called me back at night. I spent the next ten minutes haggling over 200 Solomon Island dollars with the former prime minister. Even more interestingly, I got my way. He arranged for Kalie and I to be picked up at seven in the morning, shown megapodes and dolphins, if need be the volcano, and be back by evening—all for $150. The clinching bit in the monetary negotiations was flattery. “I’ll pay you that only if you come yourself, Allan,” I said, “I want to talk to you.” I talked of his family from my memory of Theroux’s book; I said I had heard about him all the way back in India. “Yes I know your Prime Minister,” he said, “Did he tell you of me?” “Of course, of course,” I misled him. “Let’s meet in the morning and talk.”

True to his word, Allan stumbled out of his Pajero in a crumpled T-shirt and shorts, looking 10 years over his 65 or so, betel juice-stained mouth framing a face set off by close-cropped white hair. “You can’t swim in those clothes,” he said, taking one look at me. I was wearing a full-sleeved shirt and khakis. “I don’t swim, Allan, but I drown fairly well,” I said. “So you want to climb the volcano?” “Is it sort of high?” I asked, for mountain climbing, or swimming for that matter, was never my forte. “Little along the coast and then high,” he said, “I have a saying in mi kastom.” I tried pidgin: “You can see the whole of the mountain only from the bottom, never from the top.” “So you don’t want to climb in this sun,” he laughed and we made friends.

The drive to the jetty was spent discussing politics: his, then the islands’ and finally India’s. I asked him of Bougainvillea. The islands, not the flower. First he pretended not to listen. Then he climbed groggily onto the front seat and leaned into the back cabin. “You asked me a very sensitive question, Mr Menon,” he said, and then with a broad betel-stained grin continued, “but I will give you a political answer, eh?” On seeing me nod, he continued, “Bougainvillea is very far, very very far from Port Moresby,” laying in no uncertain terms his and the Solomon’s claim on the land that Papua New Guinea had annexed. We spent half an hour bumping in the boat but only 20 minutes to get across to Santo, such was the hurry and determination displayed by Nathaniel, our young boatman. He rode into the waves with carefree abandon and while the scenery spinning on either side was absolutely stunning, there was nothing to be done in the small craft but to hang on to the sides and soften the blows to the bottom by pretending to ride the waves yourself. The fact that I was more comfortable riding an elephant in Assam was made clear the next day when a very sore bottom required special care. We swooshed into Sunset lodge, picked up our guide John, a grizzled islander, and swooshed out to the megapodes.

THESE ARE REMARKABLE birds, a dozen or so large- legged fowl that range from the Nicobar Islands of India to mainland Australia. Most of them build mounds of decaying vegetation, some of them over a metre tall in which they lay their heavy, yolk-rich eggs. The fact that eggs are good for kids has never had a better example than megapodes. Their young who feed on the eggs that are 70 per cent yellow, are among the most precocious of all young in the bird world. They remain within the mound till their hind claws are good enough to dig themselves out of the hole that their parents have put them in. Once out, they are able to run and even fly on the very first day!

In Savo, the Melanesian scrub fowl did not build mounds, however. Why did they have to do that when volcanic soil was available in warm abundance all around? They dug burrows instead, some of them four to five feet long. And the incubator birds turned on geothermal energies to hatch their young, unlike the decaying vegetation that most other megapodes used. And inside the volcanic burrow, they laid a single egg thrice a day. They start this very early in the morning for by the time we were there at eight, there were no birds to be seen on the megapode field. “They have all gone away,” said John, looking at the bleak beach full of scrapes and holes but no birds, “but on the trees they sit. They will come back in the afternoon to lay one egg and once more before it become night.” We tracked down the large chickens in the trees though. Every five yards or so, brushing away Pandanus leaves, we would see a couple crouching in the shadows of the damp palm foliage. As we approached, they would take off clumsily, flying harem-scarem chicken-like onto the next branch. Dark beings with red caps, like some strange avian pastors rounding up their invisible island flock.

The megapodes, according to evolutionary theory, were distributed in the islands by ancient man who went by canoe colonising the islands. The birds themselves are flightless for the most part, or can’t fly large distances and so would have evolved in each island independent of their parent populations. All very well as a hypotheses, except, when did the Melanesian or Polynesian colonise the Nicobars? The tribes of the Andaman are supposed to have an African ancestor and they do look a tad similar to the Melanesians, but the birds are found in Nicobars. Great Nicobar, where before the tsunami, I have watched a megapode atop a mound, is not close to Melanesia though close to Aceh in Indonesia. And Sumatra has no megapodes! A fowl conundrum of island evolution indeed.

We bounced back in the boat thinking of chicken with large feet and canoes full of islanders. Primeval beings, both needing equal protection from the ravages of modernity. “You want dem eggs for breakfast?” Nathaniel broke the reverie. “One egg, it feeds four people, man!”