Size Is a Deception

Learning from the social life of Leafcutter Ants 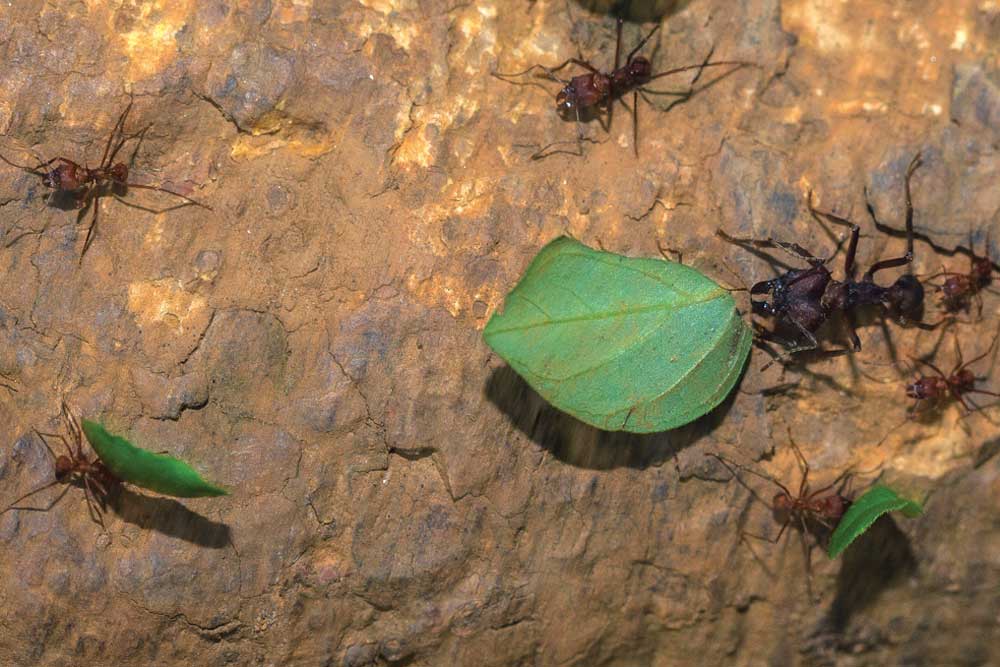 I HAVE RECENTLY been looking up Atta. Not Mohammed Atta, the Egyptian mastermind of the Twin Towers attack who imported terror to America and by extension to the rest of the world. Not Atta, the etymological origin of the English number eight fashioned after the proto-German ahtou or the Hindi aath. My recent fascination is instead with Atta, a breed of ants. I stumbled across Atta in the humid forests of Panama; a non-flashy 15 mm long, reddish-brown insect with a classical hourglass waist and an elbowed antenna. The last two anatomical features separate ants from all other insects, especially their closest cousins, bees and wasps. But Atta is no mere ant. It is probably the creature with the most fascinatingly complex social life after humans. But before I delve into the world of ants, let me tell you how I stumbled, literally, over them.

Around fifty miles from the Panama Canal lies the forests of Cocobolo. A small private reserve filled with the biodiversity of both the Caribbean and the Pacific realms. This is the part of Panama that is as narrow-waisted as the Atta ants are and in the middle of the land, this small private preserve resounds with the yowls of howler monkeys, the flutter of hummingbird wings and the slow, redolent march of the sloth. Most of these creatures, as is wont in the tropical forests of the world, are placed several metres above your head and watching them involves battling a permanent crick in the neck. Twisted ingloriously thus, you would be forgiven for not noticing a line of a few thousand ants marching along your bootstraps. And if you don’t notice them, they could climb all over you and in the confusion decide to bite you. If these are fire ants or bullet ants, the result can be extremely painful, almost as painful as the effects of their names. It is for good reason that the term ‘ants in your pants’ has come into usage. There is nothing more frenzied that can happen in the forest than a swarm of ants or bees or wasps setting out determinedly to attack you. But if you get a line of Atta ants, chance are they won’t waste their time biting you. Every Atta ant in the line has a mission, and they will merely climb along your shoelace, onto your shoe, and then downwards, marching inexorably towards the entrance to their underground fortress, most of them holding aloft an irregularly cut piece of green leaf between their mandibles, much like a fluttering pennant. And thus, the Atta gets the name they are known commonly as, Leafcutter Ants.

Now, the Atta is remarkable for a number of reasons. It starts with the size of their colony. Atta live in massive underground congregations that can reach up to 8 million individuals. That’s about as many ants as there are people in New York City or London. They live in an interconnected complex, the central hub of which can be spread 100 feet across and the whole subterranean apartment can be over 5,000 sq ft. In this relatively small place, the Atta live a remarkably rural life. For if our studies of life are in any way comprehensive, the Atta are known as the world’s first farmers, one of the most highly organised cooperative partnership models in the animal world and indeed one of the most remarkable caste systems that operate in the natural world.

The Atta bring in tons of cut green leaves into their homes. In fact, in the rainforests in which they are present, they are estimated to be the cause of nearly 20 per cent of all defoliation. A colony of ants can cut up as much biomass in a field as a cow can eat in a day. But unlike, the cow, the ants don’t eat the leaves. Forest leaves have evolved with toxins in them that the ant can’t digest. Instead, they bring back the leaves, cut it into finer pieces and then with the help of a few enzymes, decompose them in little agricultural plots and on them grow a fungus. The fungus is what the ants eat and much like gourmet gardeners in the South of France, the insects cultivate particular fungi that they like to eat. African mythology, interestingly, credit ants with having taught humanity the skill of agriculture and of cooking food. Interestingly it is our inability as a species to digest tough cellulose that made us cook our food in the first place.

THE OTHER FASCINATING thing about Atta is the inter- species partnerships that they seem to be party to. There are at least two friendships going on in the colony. The first is between the ant and the fungus. The mushrooms don’t have the ability to grow on their own and have given up that skill to be dependent on the ants cultivating it. The ants in turn are dependent on the fungus to feed the queen, the workers in the colony and the young larvae. But that is not the only partnership that happens here. The ants are fussy about the fungus they want to eat and don’t want the garden infected by any old fungus. And in this they seem to have forged an interesting symbiotic relationship with a bacterium. This anti-microbial agent appears as a whitish powder on the body of the Atta. The ant keeps brushing it on to the fungus garden it grows, much like a farmer spraying chemicals on agriculture. The closer the ant is to the actual fungus garden, the more bacteria it seems to have on its body. Different ants are differently covered by the medicine.

And this, of course, is dependent on caste. There seem to be three major and perhaps as many as seven sub-castes in Atta. The queen of course is the largest and only winged female in the colony; the only one capable of flying away to make a new nest. She does so by taking a piece of fungus in her mouth, for the mushrooms are the secret of the success of future generations of Atta. When she flies out swarms of flying males also follow her and they mate on the wing. After the flight of fancy, the queen lands on a new site and starts the process of establishing a new home. The eggs that she lays and the fungus gardens that she starts off grow slowly to become a huge colony several months later. The expansion of the colony can only happen because of the workers, the second most important caste. The ants that cut leaves are the largest among the workers and possess the biggest mandibles. Smaller and younger workers are kept in the gardens as farmers to till the fungus. Older ants are carriers of waste, moving the decaying leaves away into landfill chambers. Some other workers tend to the young ones in the nursery.

But all this activity requires guards. A third insect caste of soldiers, take up this function. Most interestingly smaller soldier ants ride piggy-back on worker ants as they bring back their precious leaf cargo. This is so that hovering parasitic wasps don’t lay their eggs on ants that can’t protect themselves with a leaf stuck in their mouth. The smaller minims, as they are called, act as the protectors of the swarm.

I crouch down on the track and after a moment lie down flat next to the conveyor belt of ants. You have to get down to their perspective to appreciate the work that they are doing. The industry of ants and bees are legendary. Ogden Nash made fun of them thus, “The ant has made himself illustrious; Through constant industry industrious; So what?; Would you be calm and placid; If you were full of formic acid?” But they don’t act as if they had acid in their bellies, rather music in their veins. There is no exaggerated staggering, no impulsive moves. They seem like an orchestra who have rehearsed their piece a million times. Each ant, as it moves, lays down a little scent trail and the one that follows, head bent to the track, follows religiously. Put your index finger on the track and rub out the fragrance of the passing ant and the follower gets confused. Now the line breaks up, till they pick up the scent again. Within seconds, order is restored and the ants move on. And as I lie with them watching their green flags flutter past my eyes, I recognise another truth about the Atta.

The Atta are not merely farmers and soldiers and royals. They are also foresters. In excavating tons of soil and moving decaying vegetation into the earth, they perform the role that earthworms perform in agriculture. They turn the soil into rich, fertile, aerated growing grounds for newer plants to take root and grow. And by cutting enormous amount of foliage, they allow sunlight to pierce the tropical forest floor, allowing new forests to grow.

There are so many things to learn from smaller life forms. When eminent biologist JBS Haldane was defending his master, Charles Darwin, during the early debates on evolution and religion, he was repeatedly challenged by an old woman about his knowledge of the nature of the Creator from the study of his creation. “An inordinate fondness of beetles,” Haldane was apocryphally said to have stated. And indeed, ants and beetles, wasps and bugs, butterflies and moths, all put together form 90 per cent of all life on earth. If God exists, then the power could only be a God of small things.