Eats Shoots but Not Leaves

The Giant Panda’s thumb and other wonders of evolution 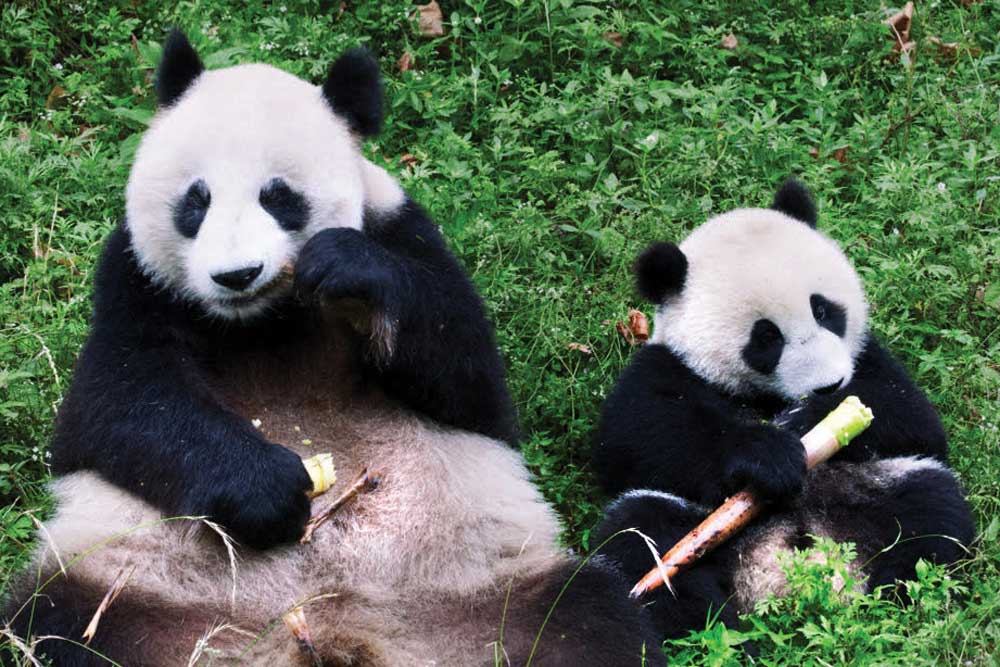 I HAVE ALWAYS BEEN fascinated by the Panda’s thumb. Being a biologist, I suppose it is de rigueur to do so. Even if the world gurgles at its perfect round eyes set in velvet black raindrops or coochy-coos at its oh-so-huggable teddy-bear proportions, the Giant Panda has another, more serious scientific distinction. Along with the finches of Galapagos and the Helleborine orchids of the marshlands of Europe, the Chinese bamboo bear is one of the pillars that support the theory of Darwinism. Not that Darwin spoke about pandas at all. He outlined the theory of natural selection citing bees and bats and barnacles, orchids and spiders and molluscs, once even the giraffe, but never once the panda. The story of the panda came much later as devotee after devotee rose to defend ‘Darwin’s Dangerous idea’ from the evangelical Church. While Hooker (the man who invented the microscope), the geologist Charles Lyell and ‘Bulldog’ Huxley (not the novelist Julian but his grandfather Thomas Henry) defended Darwin immediately upon the publication of Origin of Species, the defence of Darwin continues to this day in Republican America. In the 20th century, no one would argue that Darwin’s defence has been mounted largely by two pre-eminent scientists: Richard Dawkins and Stephen Jay Gould. Both will be better remembered as popular authors than by their early careers as an ethologist and a palaeontologist. Richard Dawkins’ The Selfish Gene and Gould’s The Panda’s Thumb: More Reflections in Natural History have led the pack of Darwinian defence. So what is the story of the Panda’s thumb?

Watching a fat Giant Panda lying on his back at the Dujiangyan Conservation and Research Centre for the Giant Panda, just outside Chengdu, with a mass of bamboo stalks littered across his abdomen, I thought of Gould and Darwin. The Panda was choosing a shoot of bamboo, and carefully, almost with a certain devotion that is attached to gourmet eating, placing it between his five fingers and thumb and then neatly detaching all the leaves by pulling it across the thumb webbing. Before you accuse me of insufficient proof-reading, let me assure you that the Panda does have five fingers and a thumb. But here is where the fun begins. The ‘thumb’ is on the opposite side of where our thumbs are. It grows between the little finger and the wrist. Nay, it is actually an extension of the wrist itself. The real thumb is where thumbs should be, but is like a typical bear thumb—non-opposable and non-flexible. The ‘thumb’ that is opposable and flexible is actually only an enlarged wrist bone, where bone and muscle have evolved to fit the bamboo eating habits of the Panda. Did the eating of bamboo over time make the wrist adjust, or did the Panda take advantage of an elongated wrist bone and use it to prepare its meal? Perhaps it was a bit of both, like all of evolution. One feeds off the other and in the end, a million tiny adjustments turn into a whole new organ (or in other cases, a whole new organism). In the panda’s case, evolution gifted it a second thumb.

I stood and thought of Darwin in a land that merged the Panda with the Pheasant and the Pepper. No, it was not the English countryside with its introduced fowl, nor the Malabar coastline with its succulent vines weighed down with showers of pepper spikes. Panda heartland is the province of Sichuan in western China. The land of the Ba and Shu tribes in ancient China, or the land of the four rivers (the literal translation of ‘Sichuan’) was for long the most populous part of China. It abuts the Tibetan plateau on one side, the Daba Mountains in the north and the Jinsha River in the west. Other than the Tibetan plateau, most of Sichuan is a river basin carved by the Jinsha, which is the name given to the upper stretches of the Yangtze and three other tributaries. Sichuan has in the past been variously romanised incorrectly as ‘Szechuan’ and ‘Szechwan’, the latter more common in Delhi for Punjabi-Chinese cuisine serving kung-pao chicken and spicy garlic chowmein. Instead of garlic, I wish they had introduced Sichuan pepper to the Punjabi palate. Now, this pepper has no connection whatsoever with Malabar pepper. It is an independent spice produced by the prickly ash, a medium-sized tree that looks reptilian with its scaly bark. Endemic to China, the Sichuan pepper tree produces small round red berries that ripen, shed their seeds and yield to gourmet cuisine brownish seed pods. The husk in these pods has a peculiar chemical known as sanshool; peculiar in the sense, it produces in your mouth a sensation of vibration. Jonathan Drori in his rather special book Around the World in 80 Trees describes it ‘like licking one’s tongue across a 9-volt battery (Hey, we’ve all done it.)’. While scientists globally are researching sanshools for pain management, as it causes a condition called paraesthesia, the Chinese in Sichuan simply refer to the sensation as ‘la’! The Hwa Jiao or ‘flower chilli’ as the locals call the spice, is liberally put into most cuisine, especially their meat dishes, making an experience of local dining a tongue- numbing and palate-thrumming experience.

But I digress from Pandas. The Conservation Centre is breeding them for putting them back into the wild and also to supply Chinese and Western zoos with perhaps their most recognisable ambassador in history. The West has had a long history of forgetting or not being able to pronounce Chinese names. The Panda is easily remembered and loved as no other Chinese emblem ever has. When the first Panda, Su Lin was sent to San Francisco 80 years ago, a panda mania started in the US and ‘everyone from Helen Keller to Al Capone couldn’t resist the chance of visit(ing) a panda’, wrote Chris Heller for Smithsonian. com. It could cost a zoo today about $2.5 million per year to rent a panda from China as the country stopped giving its pandas out anymore. Yet, demand has not abated. Entire zoo visitation, toy and accessory industries revolve around the Panda. And why is the Panda so lovable? It is partially because it reminds us of ourselves. A panda has a tendency to sit and eat, like us. Its enlarged eyes, exaggerated by the kohl-smeared eye-shadow, remind us of our children. And it’s eating habits, dextrously using its thumb to eat bamboo shoots and not the leaves, make us chuckle and also wonder. It, by the way, completely trashes the famous editorial line involving comma usage. ‘The panda eats, shoots and leaves’ is a novice sub-editor’s mistake that makes you think of a desperado panda at a wayside café, as Lynne Truss’ eponymous book reminds us; it should actually be ‘the panda eats shoots and leaves’. Wrong again, the biologist would have corrected the editor, ‘The panda eats shoots but not leaves.’

Absorbed as I was with the thumb of the Panda, I had forgotten another biological peculiarity. But not for long, as the very next day in Tianjahe National Reserve, three hours out of Chengdu, I watched perhaps the most garish bird that has been produced by evolution with a mixture of wonderment and curiosity. The pheasants are a group of birds that I have chased rather unsuccessfully over the years. The lowland species have mostly been ticked off, but those that inhabit the plateaus and steep rolling alpine grasslands have been more inaccessible since I am not much of a high-altitude person. I am not sure whether it is the fact that my lungs are smaller, coastal-evolved organs that strain at higher altitudes or that my mind has always veered towards watching a high mountain from the relative comfort of a lowland vantage point, but high-altitude pheasants have mostly eluded me. The golden pheasant is not a high-altitude dweller either and it was with relative ease that I saw two impossibly coloured males strutting through the high grass slopes of a conifer forest in Tianjahe. A scarlet red bird with a golden crown and cape thrown on it, a dark green shimmering back and a long, dark black tail splattered with cinnamon and red, the golden pheasant is a riot of colours. Herodotus, during his travels in Egypt, wrote about the mythical phoenix: ‘I have not seen a phoenix myself, for it is very rare and visits the country (so at least they say at Heliopolis) only at intervals of 500 years, on the occasion of the death of the parent bird. To judge by the paintings, its plumage is partly golden, partly red.’ I think his ancient compass was off and he was in Tianjahe watching the golden pheasant. But the male pheasant’s beauty in terms of colouration is only rivalled by its tail. Which like the panda’s thumb, is not a tail at all.

The Pheasant’s Tail is as absorbing a biological phenomenon as the Panda’s Thumb. Nearer home, one can see it in the national bird. The long tails of all pheasants are actually enlarged back feathers. The actual tail is a bony stub that is seen when a chicken is plucked bare to be sent to the kitchen. The pygostyle, which is colloquially referred to in England as ‘the parson’s nose’, is the actual tail. Everything else has grown around it to conceal it, and in the case of a pheasant, has grown in such a luxuriant and awe-inspiring fashion as to make a bystander gasp at its sheer temerity.

But the pheasants of China or the peacocks of India did not evolve a tail for birdwatchers or passing tourists. They evolved longer and longer tails as female pheasants favoured long tails. Like the Pathan hair or the Malayali moustache, males grew longer adornments to attract better mates. As Dawkins points out in the Selfish Gene, ‘The following is legitimate shorthand put into the mouth of a male pheasant, ‘If I grow drab (and short) feathers, I shall probably live a long time, but I won’t get a mate. If I grow bright (and long) feathers, I’ll probably die young, but I’ll pass on lots of genes before I die, including the genes for making bright feathers. Therefore I shall take the decision to grow bright feathers.’’

Walking next morning in Tianjahe, fed at breakfast on steamed Sichuan dumplings layered with Hwa Jiao and a liberal dose of Darwinian evolution, I startle a pair of Koklass pheasants underfoot. As the male cackles into the air, a Confucian poem comes to mind: ‘Away the startled pheasant flies, with lazy movement of its wings, Borne was my heart’s lord from my eyes; What pain that separation brings!’ Ah! Ancient Chinese lass, if only you knew that the lazy wings was due to a heavy tail and not the grief of imminent parting, would your heart not have rent a thousand times more?