Call of the Apes

Indian primates are in urgent need of conservationist attention 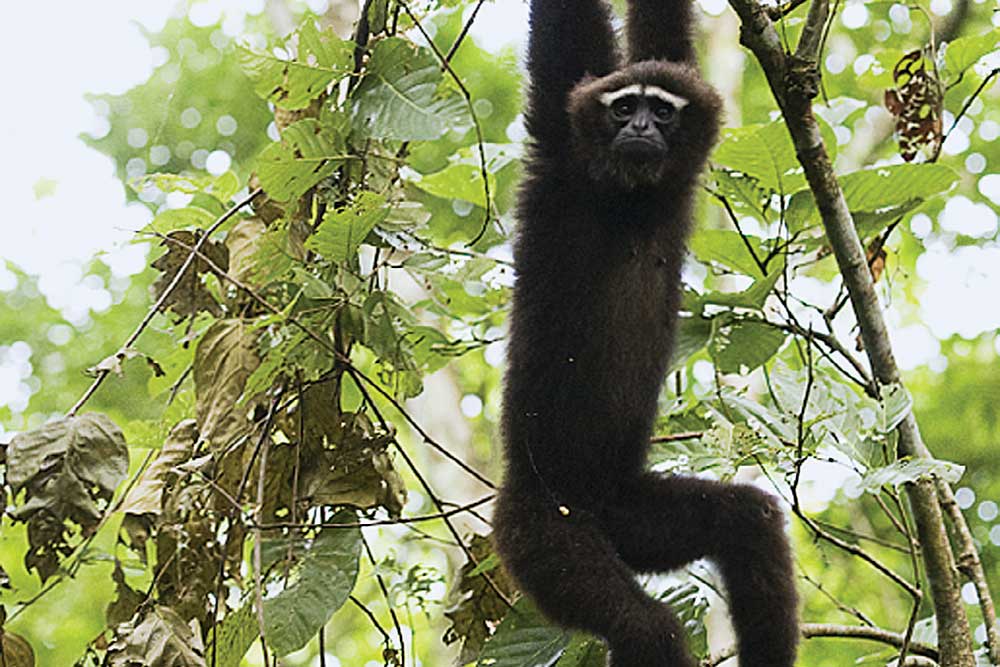 I WAS SEARCHING for monkeys outside Tinsukhia. I could as well be searching for oil, as half a dozen corporations seem to be doing in Upper Assam.But then, finding monkeys has been a personal passion, and the town, by all accounts, is a primate paradise. Within a ten-kilometre radius of the town you can stumble across seven species of primates far easier than you can find oil. Or so it is rumoured. I have seen them all, the orange and black capped langurs, the bearded Assamese macaques, the common rhesus macaques, the absurdly short-tailed pig-tailed macaques, the bald, red-faced stump-tailed macaques, the singing hoolock gibbons and the goggle-eyed slow loris but never before in one spot.That was the attraction of visiting the three Assamese sanctuaries that have been created primarily for primates. Berjan, Borajan and Podumani. Small islets of green in a landscape that reeks of oil. We left Digboi, the oldest running oil field in the world, at the crack of dawn. To the uninitiated, dawn cracks rather early in the northeast: 4.00 am. “There are no monkeys in the forest,” said the young field assistant whom I had hired for the day when we reached Borajan, the largest of the three splinters. He had worked with two, maybe three, primatologists in the past and knew where each of the species could be found.

I have had a soft corner for these field naturalists ever since my early research days. I knew a wonderful character called Muniappan at Point Calimere who could climb a brahminy kite nest and dissect it by throwing out twig after twig, chanting in Latin as I took notes at the foot of the tree. “Clerodendron on the outside,” he would say, sitting cross-legged fifteen metres up a palm tree. “Palmyra and Thespesia lining.” It was easy to absorb their native knowledge and translate it into a biological thesis.These masters of field craft have been used shamelessly by generations of biologists who, their latest bit of research over, would retreat into cities and leave them to their own devices. I try to atone for my own and my kin’s sins by building a relationship with local naturalists whenever possible. And I tended to believe Raju when he said that there were no primates in the forest.

“Where are they then?” I asked, “Are these not monkey sanctuaries?” I knew fully well that no protected area is meant solely for a group of animals, but I also knew that these three sanctuaries had been created at the behest of a primatologist- turned-bureaucrat for the specific purpose of conserving monkeys. “In the fields, sir,” he said nonchalantly. “The jowai is ripening and all the monkeys are in the village. We can even have tea and watch them there, sir.” I was to hear this repeated, time and again,through the day. Podumani has very few primates left. Berjan’s hoolocks are all out in the 21 villages of Barekuri region. And I saw the capped langur and two of the macaques of Borjan, not in its forests but in the adjacent Mahakali village. A middle-aged schoolteacher and his awakening brood made us lal cha and gave us plastic chairs to sit on in his courtyard. In front of the yard was a splendid field full of paddy. Golden yellow grain to my right, black grains of jowai to my left. A bunch of Assamese macaques came strolling down a large banyan tree to feed in the fields. Opposite the fields, in a clump of bamboo, a dozen capped langurs squealed and crunched their morning repast. Their golden bodies capped with smart black berets were turning orange at the loins, a sign that the breeding season was fast approaching.

The Assamese monkey troop had a surprise in store for us. The Assamese is distinguished from its close cousin, the rhesus, by its uniformly brown-grey pelage with no orange fur on its loins, a rather pronounced beard in a big male, and by its short tail carried parallel to the ground unlike the slightly curled tip of the rhesus. As we settled down to have our tea, several females and young ones came down from a tree into the crop fields and started feeding. It was only a full ten minutes later that the male came out and tentatively took guard at the edge of the field, standing on its hind legs often and peering out from the paddy stalks in search of danger. It was when he stood up that I saw his loins, the bright orange on his upper thighs and rump. I looked for his tail tip. Curled. There was no doubt about this animal. It was a rhesus.But what was it doing amidst a whole troop of Assamese macaques? “This one has taken over the Assamese family,” Raju said on being questioned. “The Assamese male is also there but it is seen less.” I spent two hours watching and photographing the monkeys. There was no sign of the Assamese male. The northern Indian rhesus had taken charge, it seemed, much like the Marwari businessmen of the region. The native Assamese had been relegated to a marginal role.

A lesson in protected area creation and management was there for all to see. Hastily conceptualised sanctuaries have done little to protect their key species. Like a sponge, the animals are being drawn to the peripheries and are surviving, if at all, due to some local protection efforts. Leopards live and breed in the sugarcane fields of Junnar in Maharashtra. Lions in coastal Gujarat live outside the Gir forests and in abandoned village lands close to tolerant herdsmen. Elephants in Coorg have taken to life just outside the protected areas despite the rather militant efforts of the local Kodavas. The snow leopard uses a mountain landscape that includes the land of the pastoralists and settled agriculturists and not so much the land set aside for wildlife preservation. And here, the monkeys were doing exactly that. The forest departments and the Ministry of Environment and Forests must take heed of this and try and align the conservation strategy of the country to these realities. In Islam, I believe, there is a belief that the path to the mosque is laid not afresh but alongside the already existing trail of the followers. It is wise to accept reality and fashion a plan around it, bringing it as close as possible to ideal, rather than fashioning an abstract ideal for an un-pragmatic reality to match.

The Barekuri region was even more a case in point, of the futility of not including surrounding areas of forests as buffer protection sites. Around Berjan, the village forests of the Moran- Muttock people are full of gibbons hanging from trees. The Morans took on the Ahoms in 1769 and the British in 1836. These great Assamese warriors, feted in history for having hastened the decline of the great Ahom empire, were now protecting gibbons. They would not allow anyone to approach them without their permission, let alone poach them. A small NGO had been set up by the local Moran to do exactly that. Here in Barekuri, they were militant in protecting the only ape that India has. The Western hoolock gibbon is the finest acrobat there is in the country, brachiating from canopy top to canopy top in synchronised agility. Early in the morning, the forests of Berjan resound to a haunting song. A complex primordial orchestra of gibbon families dueting in courtship and filial passion. We were too late in the morning to hear their songs but the Morans assured us that two young gibbons and a clearly pregnant adult female were coming to the edges of the forest to eat bananas being proffered by the villagers on raised bamboo stakes.As we approached the area, we heard a few hoots of anticipation. And then, there they were, hanging almost within touching distance. The female was burnished gold with white brows and she hung from a large ficus tree like a ripening fruit. The youngsters, jet black, white eyebrows arched in defiance, swung out time and again, grabbed the treat and rushed back into the trees. The female kept to her own, coming down only once we retreated. They were wild animals, but drawn to the fringes of a state-sponsored sanctuary by the love of the Morans. Possibly unwise, probably illegal even, but in the land of the Moran, the gibbons seemed content and satiated.

Many miles away, I had seen forests ravaged by agriculture and gibbons stranded with no trees to swing towards. They would come down, hands raised in abject surrender as village dogs and snotty nosed kids ran after them in wanton glee. Some were captured with wicker baskets thrown over their heads and kept as household pets on long jute ropes. Others died as they tripped and fell at the mercy of the dogs, no longer able to keep to their graceful aerial acrobatics on terra firma. Seeing those haunted apes, we had started a project to translocate them to safer forests. In Berjan, this was not required, for the community were protectors. But they had to practice more conservation than proferring bananas. There was an urgent need for the Moran to demonstrate their love of the gibbon by keeping aside forested land for them. No other call of love would serve India’s only ape in the long term. That was the new year’s hope that we conveyed to the eager Moran youngsters as we supped on duck and cucumber curry served on traditional bell metal vessels, deep in Barekuri.