‘Bleed India with a Thousand Cuts’ Policy Is in a Shambles

As a new cold war sets in between India and Pakistan in the wake of India’s retaliatory strikes on terror camps across the LoC, two Pakistani commentators present the other side of the argument 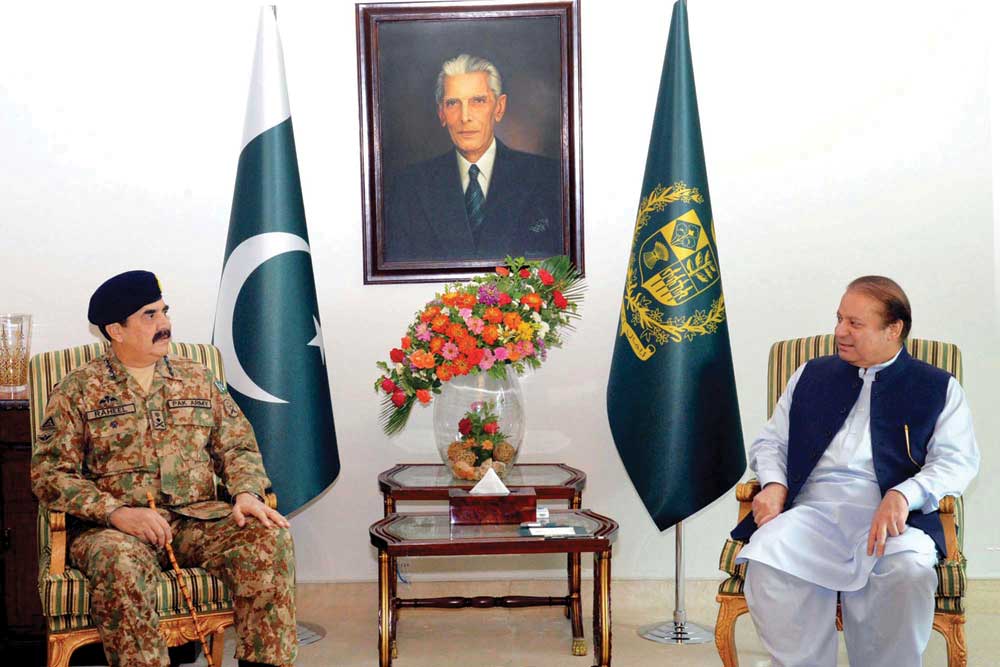 NO ONE SEES the Kashmir dispute having a solution in the foreseeable future. Everything has been tried: war, repression, elections, and inducements. Bad as the situation is now, the dreadful possibility is that it could spiral out of control. The decades of the 1980s and 1990s could return, and thousands of more Kashmiris could die. Infinitely worse, whether by choice or accident, is the possibility of nuclear catastrophe. Having cagily pranced around the nuclear threshold for three decades, for Pakistan and India to make the final journey to hell is not impossible.

These gloomy truths are undeniable. Fortunately, Uri was finally contained and appears to be winding down, just as Pathankot was earlier. But will the next crisis also be manageable? Realism demands calm thinking, letting passions subside and moving ahead. Rather than look for ultimate solutions now, the present needs to be managed and attitudes changed. But before that can happen, let India and Pakistan review their actions honestly.

It was a terrible mistake for India to eliminate 22-year-old Burhan Wani and the other Kashmiri lads. Surely, these were not the monsters that murdered dozens at Victoria Terminus in Mumbai and then scoured the rooms of the Taj looking for Hindus and Jews to shoot. They were not crazed religious extremists, nor on Pakistan’s payroll. Instead, these angry rebellious youth were drawn by romance and bravado into what they saw as a war against Indian occupation. They had a few guns, but their real weapons were Facebook images.

Unless India learns to intelligently manage Kashmiri anger, an action-reaction cycle could well take Kashmir back to the carnage that followed 1989. Set off by protests against the rigging of Kashmiri elections by far-off Delhi, India’s massive over-reaction had then sparked off an insurgency that lasted into the early 2000s and resulted in the deaths of nearly 90,000 civilians, militants, police personnel and soldiers.

Pakistan lost little time in hijacking what was then an indigenous uprising. The excesses committed by Indian security forces were soon eclipsed by those committed by Pakistan based mujahideen. The massacres of Kashmiri Pandits, targeting of civilians accused of collaborating with India, killings of Kashmiri political leaders, destruction of cinema houses and liquor shops, forcing of women into the veil, and revival of Shia-Sunni disputes severely undermined the legitimacy of the Kashmiri freedom movement and deprived it of its most potent weapon—the moral high ground.

After Uri, India moved swiftly on the diplomatic front. A news scoop published in the Karachi-based daily Dawn on 6 October suggests that the country’s political establishment is deeply worried by Pakistan’s growing international isolation and has sharp differences with the country’s military establishment. Reportedly, at a closed meeting with military leaders, Prime Minister Nawaz Sharif had demanded that fresh attempts be made to conclude the Pathankot investigation, restart the stalled Mumbai attacks-related trials in a Rawalpindi anti-terrorism court, and prevent military- led intelligence agencies from interfering in law enforcement acts against banned militant groups. These decisions were taken in the background of ‘an extraordinary verbal confrontation between Punjab Chief Minister Shahbaz Sharif and the ISI DG’.

The story has been thrice denied by Nawaz Sharif’s government, each time with greater vehemence. But Dawn’s editor stands by it: ‘The story that has been rejected by Prime Minister’s Office as a fabrication was verified, cross-checked and fact-checked.’ The very intensity of the denial, and the fact that the reporter is now barred from leaving Pakistan, suggests that there may be more than just a little truth to the story.

The emphatic repudiation is easily understood. Raw nerves have been touched at a time when the civilian government is insecure and General Raheel Sharif is enormously popular with the public. Whereas the army can portray itself as a defender of Pakistan’s territorial integrity, Nawaz Sharif is commonly depicted as the weakling who flew to Delhi for Narendra Modi’s inauguration and for many subsequent unofficial meetings.

One notes this is not the first time that such disputes have broken out into the open. Influential voices within the civil establishment are increasingly at odds over the military’s conduct of Pakistan’s foreign policy. Recently, a Pakistan Muslim League stalwart unknown for progressive views, Rana Muhammad Afzal, made local headlines when he addressed a meeting of the National Assembly Standing Committee on Foreign Affairs and asked, “Hum Hafiz Saeed ko kyun paal rahe hain? Woh hamaare liye kaunse ande de raha hai?” (Why are we nurturing Hafiz Saeed? What eggs is he laying for us?).

Displaying classic opportunism, Pakistan’s liberal parliamentary opposition has laid the blame for the country’s growing international isolation on the government instead of the military. In a joint session of Parliament, Pakistan People’s Party (PPP) lawmakers chose to egg on the government to a more muscular response against India, criticising what they said was the government’s inability to make a strong case for Pakistan on the international stage.

Surely, if India considers Kashmiris to be its citizens then it must treat them as such, not as traitors deserving bullets or to be punched with an iron fist

“The day Prime Minister Nawaz Sharif says the name of Kulbushan Jadhav, I will donate Rs 50,000 to the blind association,” said Senator Aitzaz Ahsan, one of Pakistan’s most celebrated liberals. He was referring to Sharif’s United Nations General Assembly speech, where he failed to mention the Indian spy caught in Balochistan months earlier.

PPP Senator Sherry Rehman, who runs the liberal Jinnah Institute in Islamabad, also slammed Pakistan’s foreign policy under Nawaz Sharif while praising the army’s war against terrorism. What she omitted to say is that the Foreign Office is little more than a post office. Or, if Pakistan were to appoint a foreign minister, that he would be little more than a postman.

In India, as in Pakistan, personal and political agendas have allowed principles to go to the wind. Hence deeply dangerous rhetoric has come to dominate television screens. I have watched political talk shows in both countries and been struck by the quality of their belligerence and lack of reason. A paranoid style has come to dominate politics as anchors and guests compete for the highest levels of heated exaggeration, suspiciousness, and conspiratorial fantasy.

When Rahul Gandhi accuses Narendra Modi of “khoon ki dalaali” and Bilawal Bhutto squeakily thunders “We will take back every inch of Kashmir”, it is clear that there is something dreadfully wrong. Lacking connection or empathy for the societies from which derivetheir extraordinary privilege, these princes of fortune seek to enhance their power by adding fuel to burning fires. Ditto for most of the subcontinents politicians.

KASHMIR DOES NOT have any military solution. Decades of unremitting conflict proves this. Pakistan lacks the muscle to wrest Kashmir from Indian rule, and India cannot win decisively over Pakistan in the difficult, mountainous terrains. But India’s failure in Kashmir has not translated into success for Pakistan. As the late Eqbal Ahmad passionately argued, although India’s leaders bear much responsibility for Kashmir’s tragedy, Pakistan’s defective Kashmir policy had repeatedly ‘managed to rescue defeat from the jaws of victory’.

Pakistan’s ‘bleed India with a thousand cuts’ policy—while denying that such a policy exists—is in shambles. India has sustained the losses, with no perceptible weakening of resolve or strength. Jihad has become an ugly word the world over China’s decision to stall a ban on Jaish-e Mohammed’s Masood Azhar by exercising a ‘technical hold’ at the UN somewhat muddies these waters, giving jihad proponents in Pakistan a faint hope that support exists somewhere. However, Chinese support is evanescent—China’s silence after Uri is deeply significant.

The consequence of waging covert war has been steady loss of international support for Pakistan on its Kashmir policy. This is known to all Pakistani diplomats who represent Pakistan’s position in the world’s capitals, including those of Muslim countries. The moral high ground erodes ever more sharply after every jihadist attack. This led Pakistan’s Defence Minister Khawaja Asif to call the Uri attack an “inside job” designed by India to attract sympathy. It is unlikely that Asif was able to find any buyers outside of a narrow circle in Pakistan.

The indigenisation of the Kashmir movement, increased difficulty of penetration through border fencing, and the grave domestic and international political costs of using proxies suggests a new path for Pakistan. It can make a virtue out of necessity by cracking down upon Kashmir oriented militant groups still operating from its soil. Such groups have turned out to be a menace to Pakistan’s society and armed forces, apart from taking legitimacy away from those fighting Indian rule.

Resistance to such a change comes from many places—a possible backlash from the religious parties and extreme elements within the military, and a large standing army that needs an enemy. Not to be neglected is sheer intellectual laziness and a difficulty imagining what peace could be like. Inertia, default, and adhocism dominate planning and design.

Pakistan cannot expect its international reputation to improve unless it explicitly renounces jihad as an instrument of foreign policy, and dismantles an infrastructure that is now three decades old. But does it care enough about that? As I have frequently argued, it does. With a reasonably high economic growth rate predicted for the forthcoming year, and with the China Pakistan Economic Corridor close to $47 billion dollars investment, it has much to lose.

India has perhaps even more reason to want peace and stability. From a rational point of view, ratcheting up tensions with Pakistan makes even less sense. While Prime Minister Modi has finally stepped back from chest-thumping and irresponsible posturing on the Indian Army’s ‘surgical strikes’, much damage has been done.

India must understand that the key to cooling Kashmir is in its own possession, not in Pakistan’s. India stands morally isolated from Kashmiri Muslims and incurs the very considerable costs of an occupying power. Indian soldiers do not want to die in Kashmir—why should they? By formally acknowledging Kashmir as a problem that needs a solution, using humane methods of crowd control, and releasing political prisoners from Kashmiri jails, India could move sensibly towards a lessening of internal tensions.

Thoughtful Indians must ask why their country should care about peace in Kashmir. Surely, if India considers Kashmiris to be its citizens, then it must treat them as such, not as traitors deserving bullets or to be punched with an iron fist. Else it should hand Kashmir over to Kashmiris—or Pakistan. Indeed, its efforts to create a secular state and have religious harmony—and to become the third biggest economy in the world by 2050—could all come to naught if Pakistan and India relations boil over.

There is another danger, one that India could pay dearly for. The radicalisation of Kashmiri youth is well under way. Propelled by India’s mishandling of civil dissent, Kashmiri identity is being rapidly displaced by an Islamic identity. Islamic slogans and calls for an Islamic state in Kashmir are being heard with ever greater vigour at anti-India demonstrations. Once released, fanatical zeal becomes impossible to control. It took a long time for Pakistan to understand this point. One can only hope that India will realise it before it is too late.

Pakistan and India cannot afford the next decade to look like previous ones. Their conflict is like a cancerous growth, a malignant organism growing unchecked. Hostile state-sponsored propaganda on both sides must end. The road to peace has narrowed but remains open.

Also Read: There is Just One Issue: Kashmir by Mehr Tarar 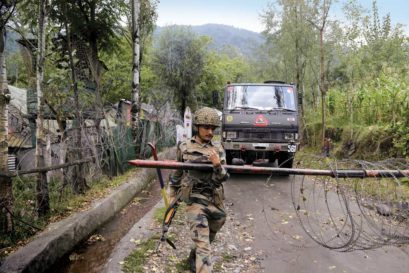 There is Just One Issue: Kashmir