Musk exudes the wrong cultural vibe. That is good enough to set the liberal house on fire 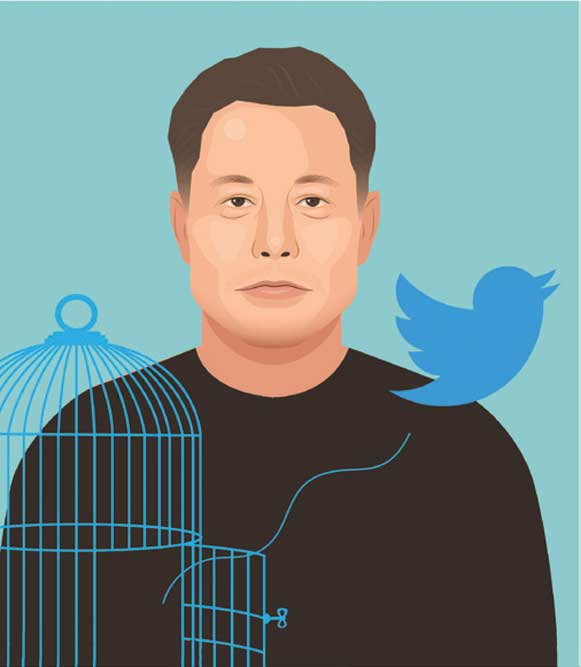 BOTH BIRDWATCHERS AND Bird-riders are getting into a tizzy. Ever since the richest man on the planet, and an intergalactic showman among his one-dimensional peers in Big Tech, was forced to buy Twitter, we have been hearing a lot about the nature of free speech on the social-media platform with more than 200 million daily users. Elon Musk, the new owner, by playing the libertarian whenever he chooses to, thickens the now-familiar plot of unrestrained undesirables—anti-Semitics, conspiracy-mongers, and other sundry hate-peddlers—crawling across the Twittersphere with their 280-character arsenal, as if it is his idea of casual cultural therapy. The liberal backlash has begun: some big advertisers have decided to take a pause and watch the future course of Musk’s Twitter and some high-profile users have taken leave. Isn’t it a case of misplaced moral alarmism?

We can understand the anger if it is all about social-media hygiene. It is a place where the faceless and the nameless feel empowered, enjoy the freedom to spread nonsense, and where self-proclaimed humanity-savers challenge science and common sense. That is the Twitter netherworld, and it stinks. Twitter is also what Musk calls a “common digital town square”, where the brevity of original thoughts and curious glimpses of life experience and curated information for the lazy legion are shared by pundits, everyday memoirists and the inconspicuous Anyone. Twitter may have toxified conversation and weaponised digital alternative communities; it has also democratised communication. Everyone has an opinion, so let it be known.

The toxification happened long before Musk decided to “free the bird”. When ideology returned with a vengeance to politics, Twitter became the battlefield. Two individuals made the divisions starker, righteous and tribal. Donald Trump marked the all-time aesthetic low in political communication when the president, wallowing in liberal persecution and on a permanent show trial by the mainstream media, turned the microblogging platform into a microphone for grievance. He fed the base with his version of truth woven out of selective facts, a practice that earned him the title of President of the Post-Truth World. Twitter gave millions of others like him, but without the benefits of the world’s most powerful presidency, a medium that demands no basic intellectual qualification if you can turn your rage and resentment into pint-sized provocations. The January 6 attack on the US Capitol brought out in terrifying clarity the power of such provocations.

Trump also gave the liberals, for so long indulging in moral flagellation with little political or social impact, a much-needed cause. The visceral anti-intellectualism of Trump was matched by the liberal urge to repudiate him without addressing the social process that created him. In the clash of the righteous and the outrageous, Twitter was not just the medium; it played the judge, and took sides. Content moderation was not a fair deal when Twitter bared its progressive mind.

Maybe George Floyd, who was killed by the racist aggression of a white cop, was the most influential figure in changing the cultural space. The killing was brutal, and it further exposed the persistence of America’s faultlines, but what followed was more than an outbreak of sorrow and rage. The public execution of one Black man set the stage for a new progressive absolutism. The so-called cancel culture was the free world’s alternative to the Gulag. Twitter was the public square as well as the samizdat. It also played a more problematic role: through its selective exile policy, the medium became the manager of the narrative.

Musk, a compulsive tweeter with more than 100 million followers, was not watching the culture war on the rearview mirror of a Tesla. He has an opinion on the zeitgeist, and he is not afraid of saying it through the medium he loves, and his opinion mostly defies the progressive pieties. Twitter has a major part in the formation of its new owner’s public persona. This Musk, the libertarian who promises to uncage the bird, frightens the people who were once frightened by the bogeymen from the Right. It doesn’t matter that Musk has not demolished the barriers of the old Twitter for the launch of a Twitter with
“zero content moderation”. And he has not promised a homecoming to the Twitter-purged Trump either. Musk exudes the wrong cultural vibe. That is good enough to set the liberal house on fire.

Dictators are not the only advocates of an online code of conduct. States that want complete copyright over the national story and ideologues from the left and the right, too, want unconditional ownership of cultural attitudes. Fumigation is not the same as cancellation, and a social-media space with an open sewage system can afford the former. The Twitter anxiety generated by Musk’s disruption only reveals what the ideological warriors really want: not content moderation but content control. How dare you release the bird, Mr Musk!