The US presidential election has nothing to do with Joe Biden 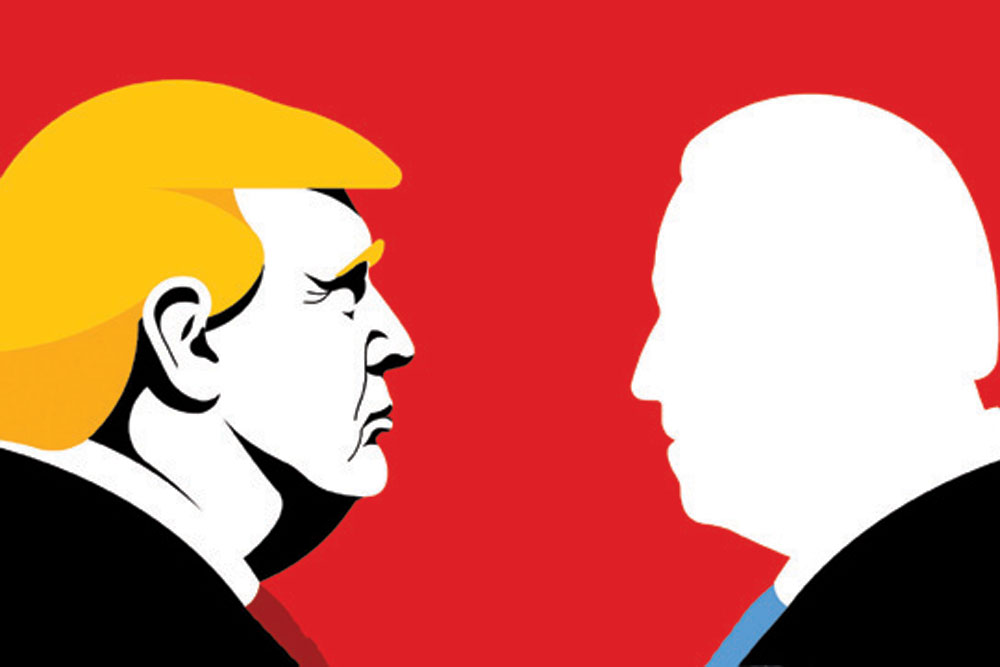 ‘HISTORIC’ IS AN adjective liberally used by those who are struck by the enormity of the present. America is in such a moment, when the naked audacity of one man has brought out the best and worst instincts of them all—institutional guardians, media elite, liberals and progressives, the telluric warriors of social media, and the legion that fears for the future of ‘greatness’—in a cracked-up superpower. It is that moment when the narcissistic transgressions and Twitter-driven triangulations of an unhinged, apolitical president have turned the political arena into a site of tribal bloodlust. ‘Historic’ is the moment for those who see the world’s most thoughtfully founded constitutional democracy going down with its bad progeny. The presidential election on November 3rd is their ‘historic’ opportunity to restore the system, to redeem the original pledge, and to exorcise the bad spirit of demagogic populism. History, in America today, for all polemical purpose, revolves around a five-letter amorality called Trump. Or that’s the story we are rereading. And that’s the story polls and pundits predict will come to an end, hopefully before the postal ballots are counted. ‘Historic’ rhymes with horrific here.

Certain men—mostly men, yes—in politics evoke alarmism and apocalypse in equal measure, giving our adjective a darker tinge. Such men originally come from the impatience and impulses of democracy. They dislodge the old consensus, frighten its builders to submission, and set out to create—what else?—greatness. A perfumed future is guaranteed, and invariably, a future wracked by nationalist paranoia is ensured. Such men have a use-by date, and what they leave behind, the toxic ism,
has a longer life.

That’s what is being feared about Trumpism too in the current ‘historic’ narrative. And History—the occasion demands a Capital H—made it a ‘twindemic’ in America, and the verdict is still not final on which is more of an existential threat. The two complement each other. The coronavirus has chosen America as its most favoured nation, and the president, through denial and bravado, gave the virus a free run. Trumpism, the other pandemic, devalued institutions, corrupted constitutional morality and declared war on good taste. The ‘twindemic’ has put the health of Americans and American democracy in mortal danger. That’s the most retold story of our times, and it’s the veracity of this story that November 3rd will test.

A good story, especially of the horror genre, needs a clash, and in one with an adjective as heavy as ‘historic’, it needs a good guy. Joe Biden is the good guy, a perfect specimen of the same Establishment that America voted out in 2016. Then he embodied the swamp: status quoism, entrenchment, and a fear of the new. He was pure prosaicness in the shadow of the lofty, poetic Obama. He didn’t matter. He didn’t matter even during the initial rounds of the Democratic primaries, when socialists and progressives were winning. He was the weary reminder of yesterday.

In the ‘historic’ today, he is the elasticity of hope, the dream America wants to dream after four years of nightmare—or that’s the portrait of Candidate Biden you get from ‘responsible’ media, shared by the culture warriors from the left. He may have the reassuring aura of the old guard, senescence apart, when paired with Trump, all volatility and combustibility. He is the calm after the storm liberal America wants, if the polls are any indication. And this America, tired of Trumpian unconventionalism, is thrilled to have wonkery as vision thing. He is not what he is. He is what he is not. He is Non-Trump.

Which means this election has nothing to do with Joe Biden. For someone who has all along been a statement of political inanimateness, it’s an evolutionary high point. Finally, in the evening of his life, he, the gentle soul, is there to reclaim America from the big intruder. He is there as Non-Trump. Joe Biden, as it has always been the case, doesn’t matter. There is nothing in a name as long as the other name is Trump. He is defined not by what he says—‘I will be an ally of the light’—but by what the other guy tweets. He is the nothingness beyond the cultural whirl of Trumpism, and, hopefully, it will take shape when America is reborn. The alternative to Trump is an unrealised version of Trump Undone. Being Non-Trump is not a negation of identity but the importance of being an accident.