The Murmu moment and cinema’s indebtedness to Adivasi culture 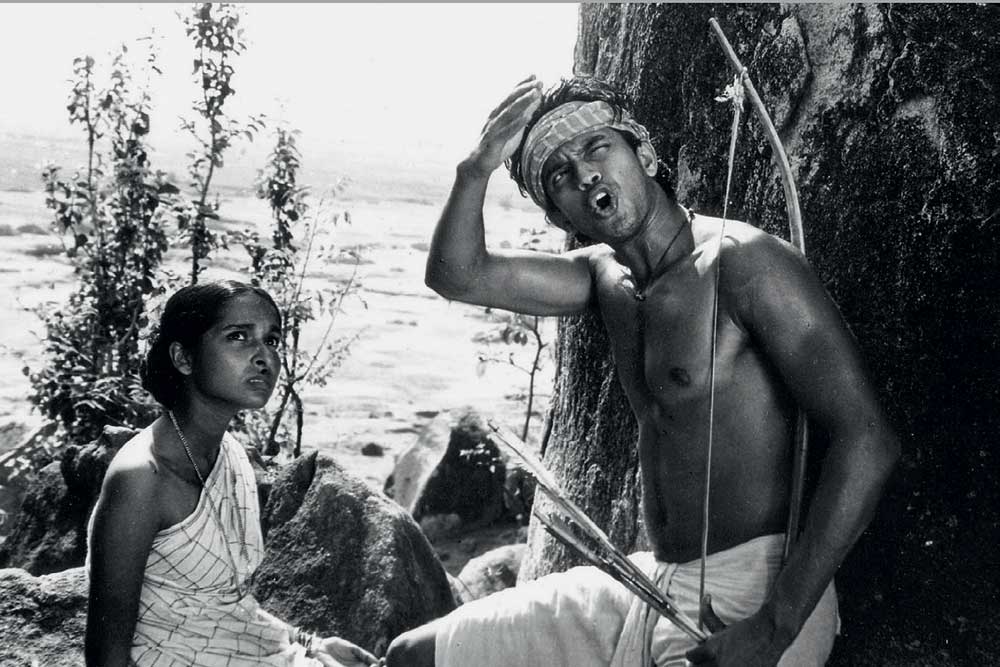 
IT IS A MAJOR political event that a Santali Adivasi woman, Draupadi Murmu, is likely to become the president of India.

Although the term “tribal” is still used, not least in the Constitution of India, it is largely replaced by Adivasis (literally, “original dwellers”).

When I was on holiday in Bhubaneswar a few years ago, I went to the Odisha State Tribal Museum, more as a place to tick off a tourist list rather than because of any burning interest in tribal culture. However, after a couple of hours, I could barely tear myself away, leaving only because I had other engagements. The museum kindly provided an Adivasi guide to show us around its fabulous collection, informing us in a way only he could about the culture of the 62 different tribes of Odisha, from items used in daily life to the most exquisite aesthetic objects.

I don’t think I’m alone in knowing little about India’s Adivasis who are studied mostly by anthropologists. I am familiar with the work of Verrier Elwin (largely via Ramachandra Guha) and of my erstwhile colleague, Professor Christoph von Fürer-Haimendorf. However, neither worked with Santals. In south India, the Jenu Kuruba have renowned skills in looking after elephants and are employed as mahouts.

I’m not an anthropologist, so I know of Santals in literature and cinema, where they are shown by non-Adivasis more widely as part of Indian culture. However, I am unfamiliar with the Santali film industry which produces many videos which circulate widely and are seen in festivals.

Hindi films have mostly grotesque and embarrassing representations of the Adivasis but Santal culture features in the work of the educated elites of Bengal. Tagore admired the Santals who lived around Santiniketan, seeing beauty in their everyday culture which he wrote about in his poem ‘Saontal Meye’ (The Santal Girl), where he feels shame at paying a Santal girl to become a labourer.

Mahasweta Devi’s famous story ‘Draupadi’ (which I read in Gayatri Spivak’s translation), is about a Santal woman, Dopdi Mehjen, who is part of a tribal uprising in 1971, Operation Bakuli. The story sets the narrative of her rape in the context of the Naxalite Movement, the Bangladesh Liberation War, and the Mahabharata story of Draupadi. Dopdi is raped by Army officers but she refuses to be a silent subaltern (referencing Spivak’s famous paper, ‘Can the subaltern speak?’), and, unashamed to appear naked (and wounded) in front of the officer, Senanayak, speaks to the elites in a powerful voice.

Two films that show an extended view of Santals are Satyajit Ray’s Aranyer Din Ratri (1970) and Mrinal Sen’s Mrigayaa (1976), which are again set in the same period.

Ray’s adaptation of Sunil Gangopadhyay’s novel is the story of four educated urban male friends who go to a tribal area, Palamau, in Bihar. While they enjoy spending time with Aparna and Jaya, also urban sophisticates, Hari, whose pride is wounded by his former girlfriend who left him, has an affair with Duli, a Santal girl, leading to him being robbed and beaten up.

The film unfolds at a steady pace to show the shallow brash behaviour of the educated urban youth and their disregard for the poor and the rural environment while presenting the four male characters as engaging individuals. The forest for them is, at first, a meaningless space, a site for adventure where they can behave as they like. Its stillness and beauty are shot beautifully, the forest’s constancy remaining at the end of the film when the youth all realise that they have changed profoundly by their experience.

Aranyer Din Ratri is a great film, outstanding for its visual qualities, its powerful story, and superb acting. Its famous scenes of the “memory game”, where Aparna (Sharmila Tagore) lets Ashim (Soumitra Chatterjee) win, and the Santal village fair where Ashim insists on paying for everything with Aparna later giving him her phone number on a currency note, are among the lovely interactions between the two, along with the comedy of the washing at the well and stopping the car, which shows how Aparna always has the upper hand.


Set in Odisha in the 1930s, the film takes the theme of ‘Mrigaya’ hunting, but shows that although the British and adivasi hunters can unite in their love of the chase, they have completely different value systems

Duli, played by Simi Garewal, is first seen drinking, and she is watched by the men—and us, the audience— as she sweeps the floor in their lodging, showing her attractive figure. Hari, who feels humiliated by his urban girlfriend for dumping him, feels dominant with Duli whom he offers a life in a city. When Lakha, a Santal man, beats him up, is he a rival or a self-appointed defender of Adivasi women’s honour? Duli, like Jaya, is a widow, but by contrast, she is able to enjoy life while Jaya, whose husband committed suicide, is full of unfulfilled desires and, aware of her marginal status, describes herself as ghostlike.

Simi’s performance was good but in today’s climate—50 years later—can the audience accept a fair urban sophisticate, her skin artificially darkened, playing an Adivasi girl? Even if she returns the gaze of the urbanites and has her own subjectivity?

Mrinal Sen’s Mrigayaa, based on the short story ‘Shikhar’ by Odia writer Bhagabati Charan Panigrahi, is remembered as Mithun Chakraborty’s debut as well as that of Mamata Shankar, of the famous artistic family, including Ravi and Uday Shankar, as the young Santali couple.

Set in Odisha in the 1930s, the film takes the theme of “mrigayaa” hunting, but shows that although the British and Adivasi hunters can unite in their love of the chase, they have completely different value systems. The village is plagued by the moneylender and wild animals while also suffering under British rule.

Ghinua (Mithun), who has seen the rulers hunt and kill the young Santal revolutionary, Shalpu, believes that the moneylenders’ assault on his wife makes him prey to be hunted and killed. He doesn’t understand that the British see this as murder and hang him despite his arguing he has killed justly.

Although Mrigayaa is set in the late days of British rule, there are references to the Santal Hul (rebellion) of 1855-56, and perhaps to the Naxalbari uprisings of 1967, making it somewhat confusing in a way Mahasweta Devi’s ‘Draupadi’ is not.

I think I was also confused as the British administrator is played by Robert (Bob) Wright (looking remarkably like David Niven), the famous manager of the Tollygunge Club, Calcutta. This explains why his house is so grand and the garden looks like a golf course as it is actually the Tolly’s eighteen-hole wonder.

The famous Santal dances are always celebrated, performed in Santiniketan, and seen in most films showing the Santals. Mahasweta Devi’s uncle, Ritwik Ghatak, has a Santal dance in his Ajantrik (1958) as does Satyajit Ray in Agantuk (1991). sRay’s static shooting feels more like an outsider’s view whereas Ghatak enters the dance, reminding one of his discussions of shooting noted in his article, ‘The Eye: Movement in Film’ (1969).

There is one Hindi film with a wonderful depiction of the Santals. It is one of my all-time favourite Hindi films, Madhumati (1958). The song, ‘Chad gayo papi bichua’, sung by Lata Mangeshkar and Manna Dey, is an Assamese Santali song, danced by Madhumati (Vyjayanthimala). Although the stars and language make it seem like a Bombay-Hindi film, it is very Bengali, directed by Bimal Roy, written by Ritwik Ghatak, and music by Salil Chowdhury, and it shows the Adivasis as part of the natural world around them despite the predations of those who see the forest only as some place to be exploited for its economic benefits.

We have much to learn from Adivasi culture and it is time we heard from them directly rather than through the interpretations of others.