The Survival of the Learned

Does a calamity allow you to deviate from dharma? 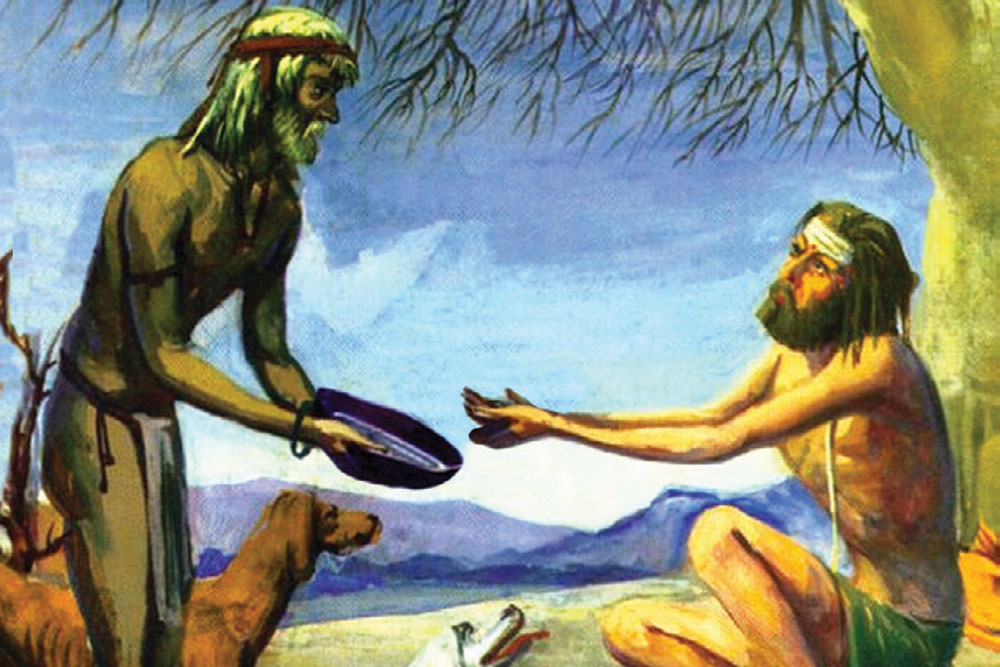 THERE IS A section in the Mahabharata known as aapad dharma, the dharma in the time of calamities. When Bhishma lay down on his bed of arrows and instructed Yudhishthira, this is a story he told Yudhishthira, about Vishvamitra and a Chandala. A Chandala is different from a Shvapacha. A Shvapacha is a person who keeps dogs and also eats dogs. However, the two words are often used interchangeably.

In the intervening period between Treta Yuga and Dvapara Yuga, there was a terrible drought for 12 years. It did not rain. Agriculture and animal husbandry were destroyed. Shops and markets disappeared. There were no assemblies of people. Most of the cities were emptied. All the mortals were hungry and ate each other. The rishis abandoned their rituals.

Maharshi Vishvamitra was afflicted by hunger and wandered around. He came upon the houses of Shvapachas, who killed animals and ate their flesh. The place was strewn with broken pots and the hides of dogs. There were heaps of shattered bones from boars and asses. There were pots made of skulls. The huts were decorated with garlands made from the cast-off skins of snakes. The temples bore flags made out of the feathers of owls. There were iron bells and the place was surrounded by packs of dogs. Afflicted by hunger, the great rishi, Gadhi’s son, entered. He made efforts to search for some food there. Though he was begging for alms, Koushika could find nothing there. There were no meat, rice, roots or fruit or anything else. Koushika thought, ‘Alas! A great hardship has come upon me.’ Because of his weakness, in that hamlet of the Chandalas, he fell down on the ground. The sage thought, ‘Do I have any good merits left? How can I avoid a pointless death?’

The sage then saw some dog meat hung out on a rope in a Chandala’s house, from an animal that had just been killed. He thought, ‘I must steal this now. Other than this, there is no other means for me to remain alive. In a time of catastrophe, it has been determined that even an especially distinguished person can steal. One must first take from someone who is inferior and then from someone who is equal. If these are impossible, one can take from an eminent person, even if he follows dharma. I will therefore take it from those who live on the outside fringes. I do not see any sin in this theft. I will steal the meat.’

Having decided this, Vishvamitra, the great sage, went to sleep at the spot where he had fallen down. When he saw that it was night and everyone in the Chandala hamlet was asleep, the illustrious one arose and gently entered the hut. The Chandala was asleep, but he woke up. His voice was broken and harsh and he was unpleasant to look at. He asked, ‘When the hamlet of the Chandalas is asleep, who is stirring the rope? I am awake. I am not asleep. I am terrible and I will kill you.’ At these sudden and forceful words and anxious at the prospect of his actually doing this, Vishvamitra replied, ‘I am Vishvamitra.’ The Chandala heard these words and was terrified. He leapt up from his supine position. Tears flowed from his eyes. He joined his hands in salutation, showed a great deal of honour and told Koushika, ‘O, Brahmana! What do you wish to do here in the night?’

The Chandala replied, ‘O Maharshi! Listen to my words. Having heard me, act accordingly, so that dharma is not made to decay. The learned say that dogs are the worst among animals. The worst part of the body is said to be the thighs and the haunches. O Maharshi! You did not act properly when you decided to commit this perverse deed. You should not steal from a Chandala, in particular, food that you should not eat. Look towards some other means so that you may be successful in remaining alive. O Great Sage! Do not destroy your austerities because of this greed for meat. You know that this is a forbidden path. You should not abandon dharma.’

Having been thus addressed, the great sage, Vishvamitra, afflicted by hunger, again replied. ‘I have been running around for a very long time, without any food. There is no other means for me to remain alive. If one faces a hardship, one should do whatever is possible to remain alive, and if possible, act in accordance with dharma. It is better to be alive than dead. One can follow dharma only if one remains alive. In my desire to remain alive, I will also eat what should not be eaten. Grant me permission. I am following the dharma of remaining alive and will cleanse all the impurities through my knowledge and austerities, like stellar bodies dispelling great darkness.’

The Shvapacha said, ‘Beg for something else. Do not set your mind on begging for, and eating, dogs. Dogs should not be eaten by Brahmanas.’

Vishvamitra replied, ‘O Shvapacha! At a time of famine, no other meat is easily available, or rice. Nor do I possess riches. I am afflicted by hunger and have lost all hope of even being able to move.’


If a learned person confronts a calamity and desires to remain alive, as long as he is not miserable in his heart, he must cheerfully use every method to save himself. If a man remains alive, he obtains what is sacred and is fortunate

Vishvamitra replied, ‘I am a Brahmana and this body is my friend. In this world, it is worshipped as the most loved. Since I desire to maintain it, I will take this. There is an uncertainty about what will happen to me after death. Perhaps all my deeds will be destroyed. If I protect the foundation by eating what should not be eaten, I may still return with a cleansed soul. In my knowledge, I am satisfied that the two [the body and soul] are distinct, like the skin and sight, and thinking that they are the same is incorrect. If you are my well-wisher and desire my happiness, then save me from this distress. I know what dharma is. Give me the dog’s haunch.’

The Shvapacha said, ‘I am not interested in giving you this. Nor can I ignore my own food being taken away. O Brahmana! Both of us will be stained by sins—I, because I am the giver, and you, because you are receiving it.’

Vishvamitra replied, ‘After perpetrating this wicked act today, if I am still alive and roam around, I will act so as to cleanse myself. Having purified myself, I will obtain dharma.’

The Shvapacha said, ‘The atman is the witness to everything that is done in this world. You yourself know what is wicked here. I think that anyone who is prepared to eat dog meat will not be ready to abstain from anything.’

Vishvamitra replied, ‘There is no sin in taking it, or eating it. It is always good policy to allow for exceptions. There has been no violence. No false words have been spoken. This can therefore be eaten and there will be no grave sin.’

Matanga desisted. He had no answer to the question of whether the physical body or the atman was going to eat the dog meat. Having made up his mind, Vishvamitra took the dog’s haunch. The great sage returned to the forest, to gratify his wife with this. At that time, Vasava (Indra) began to rain down. (Though he took the dog meat, Vishvamitra didn’t actually have to eat it.) All the subjects were revived and the herbs were generated. The illustrious Vishvamitra performed austerities and burnt his sins.

Bhishma concluded with a moral. If a learned person confronts a calamity and desires to remain alive, as long as he is not miserable in his heart, he must cheerfully use every method to save himself. If a man remains alive, he obtains what is sacred and is fortunate. The earlier story I told you, about the rat and the cat, is also from the aapad dharma section. The tenor of this entire section is that, in times of calamity, deviations from the template of dharma are possible.

The standard template is no longer applicable at the time of an emergency.