The Rewards of Devotion

The journey of the seeker and the benevolence of the giver 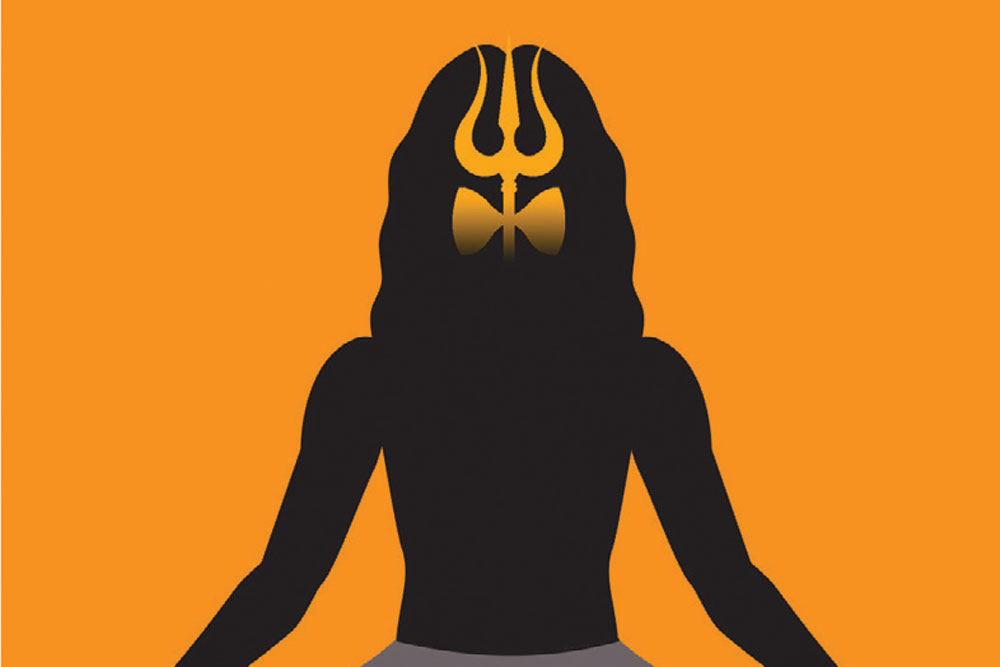 
THE BHIMASHANKARA STORY is not over. The lingam is also known as Bhimeshvara. I hope you remember where we left off in the last column, with the king of Kamarupa praying to Shiva.

Suta said, “So as to protect and ensure his welfare, Shiva affectionately went near his own devotee, along with his ganas. But he remained hidden. Meanwhile, the lord of Kamarupa started to immerse himself in deep dhyana, in front of the parthiva lingam. Someone went and told the rakshasa, “The king has started some abhichara against you.” [Abhichara means magical practices, typically with evil intent.] Hearing this, the rakshasa became angry. He seized a sword and rushed towards the king, desiring to kill him. Seeing the parthiva lingam there, the rakshasa thought, “He must be doing something with this. Therefore, I will use force to kill the king and destroy all his ancillary stuff.” Thinking this, the extremely angry rakshasa spoke to the king. Bhima said, “O evil-souled king! What are you doing now? Please tell me the truth. Otherwise, it is certain that I will kill you.” Hearing these words, the lord of Kamarupa quickly thought about this in his mind, full of faith in Shiva. “What is going to happen is certain to happen. No one can counter it. Everyone is subject to prarabdha karma and Shiva is said to be the one who determines prarabdha. The compassionate Shankara is certainly present in this parthiva lingam. He will act for my sake. Who is this rakshasa? Where has he come from? It is true that he always acts according to the pledge he has made. Bhagavan Shiva is truthful to his pledge. The shruti texts have said that. “If anyone causes terrible hardship to my devotee, there is no doubt that I will kill the wicked person, so as to protect him.” [The part within quotes is a pledge made by Shiva.]

Hence, resorting to his fortitude, he continued to perform dhyana on Shankara, the divinity. With devotion in his mind, the lord of the earth prayed. “I am your great king. Do what you will. I will tell him the truth. Please ensure my welfare.” Bound by the bonds of truth, the king thought this in his mind and addressed the rakshasa in slighting words. The king said, “I am worshipping the divinity Shankara, who protects his own devotees. He is without aberrations and is the lord of everything, mobile and immobile.” Hearing the words of the lord of Kamarupa, Bhima’s body trembled in rage and he spoke the following words. Bhima said, “I know about your Shankara. What will he do to me? My father’s brother kept him as a servant. [I hope you remember that Bhima was the son of Karkati and Kumbhakarna. Therefore, father’s brother means Ravana. Shiva is said to be a servant to his devotees. As Shiva’s worshipper, Ravana made Shiva a servant.] Is your desire to win based on his strength? In that case, you will conquer everything. There is no need to think about it. Until I have seen Shankara, your protector, you can think of him as your lord and serve him. O king! However, once I have seen him, everything will become clear in every possible way. Therefore, keep this image of Shiva far away. Otherwise, there is no doubt that you will face a reason for fear now. I am terrible in my valour and I will lay my fierce hands on your lord.” Hearing these words, the lord and king of Kamarupa, whose faith in Shankara was firm, quickly addressed him in these words. The king said, “O vile one! O wicked one! I will never let go of Shankara. My lord is the best of all and he will never leave me.” Hearing the words of the king, whose atman was in Shiva, Bhima laughed. The rakshasa quickly replied to the king. Bhima said, “He is mad. He constantly begs. Does he know what he looks like? How can yogis be intent on protecting their devotees? Reflect on this in your mind and always maintain a distance. Your lord and I will fight.” The best among kings was firm in his devotion towards Shambhu. He replied fearlessly to Bhima, who constantly brought miseries to the world. The king replied, “O evil-souled rakshasa! Listen. I am incapable of doing this. You have transgressed. How can you possibly be strong?” Thus addressed, he gathered his soldiers together and reprimanded the king.”


Bhima said, ‘I know about your Shankara. What will he do to me? My father’s brother kept him as a servant.’ Bhima was the son of Karkati and Kumbhakarna. Therefore, father’s brother means Ravana. Shiva is said to be a servant to his devotees. As Shiva’s worshipper, Ravana made Shiva a servant

“He hurled his terrible sword towards the parthiva lingam. “Now behold your lord’s strength, which brings happiness to devotees.” Saying this, the immensely strong rakshasa laughed out aloud. O Brahmanas! As soon as the sword touched the parthiva lingam, Hara manifested himself from within the parthiva lingam. “Behold. I am Bhimeshvara. For the sake of protecting, I have manifested myself. I have formerly taken the pledge that I will always protect my devotees. Therefore, swiftly witness my strength, which brings happiness to devotees.” Saying this, he used Pinaka to slice the sword into two fragments. At this, the rakshasa hurled a trident. But Shambhu shattered the wicked one’s trident into fragments. He next hurled a spear towards Shambhu. Shambhu used his arrows to instantly shatter this into a hundred thousand fragments. He hurled a jagged javelin towards Shambhu. But Shiva used his trident to immediately reduce it to bits as small as sesame seeds. Thereafter, there was an extremely terrible battle between the rakshasas and Shiva’s ganas, causing grief to those who witnessed it. At that moment, everyone on earth was agitated. The oceans and all the mountains trembled. Devas and all the rishis were anxious. They told each other, “Our prayers to Shiva have been in vain.” Narada arrived before Shankara, the destroyer of miseries. He lowered his head, joined his hands in salutation and prayed. Narada said, “Please pardon me. O lord! Please forgive me. You are causing confusion. Why use an axe when a blade of grass will do? Please kill him quickly.” Thus entreated, the lord Shambhu used the weapon of humkara to reduce the large number of rakshasas to ashes. Shankara burnt down all the rakshasas in an instant. While all the devas watched, Shiva’s rage swiftly burnt down the army of rakshasas, just as the fire from a forest conflagration burns down a forest. No one could see Bhima’s ashes. He was burnt down, along with his companions. No one ever heard of his name again. O lords among sages! As a result of Shiva’s favours, peace was obtained. Shakra and all the other devas and the entire world went back to their natural states. The blaze that arose from Mahesha’s rage spread from forest to forest. The ashes of therakshasas were scattered in all the forests. Many kinds of useful herbs originated from this. Using these ashes, men can change their garb. Bhutas, pretas and pishachas maintain their distance from a person who uses these ashes. O Brahmanas! Using these ashes, there is no task that cannot be performed. Devas and sages especially requested Shambhu. “O lord! For the happiness of the worlds, please remain established in this place. This is an awful region that has brought miseries that cannot be fought against to people. If they see you, there will be welfare here. You will have the name of Bhimashankara and will ensure every kind of success. This lingam must always be worshipped and will counter every kind of sin.” Shambhu, who brings welfare to the worlds, was requested in this way. The self-ruling one, affectionate towards his devotees, happily remained established there.”

In the famous jyotirlingam shloka, Bhimashankara is said to be in the region of Dakini. Where is Dakini? The shloka also says Somanatha jyotirlingam is in Saurashtra. Saurasthra is a clearly identified geographical place. Dakini is not like that. In all probability, you have heard that Bhimashankara jyotirlingam is near Pune. Perhaps it is, and the Bhimarathi river flows nearby. Though the present temple isn’t that old, there are temples and cave carvings everywhere around. There are forests and this is obviously an ancient place of worship. The one near Pune is naturally famous. However, what does one make of the word “Dakini”? It can mean the south (dakshina) and by not too great a stretch, Maharashtra can be construed as the south, at least in those days. But “Dakini” might also mean a place where dakinis were worshipped. In that case, one should look for a place with a tantra tradition. More importantly, how does one reconcile Kamarupa with Maharashtra, unless one comes up with a very convoluted explanation? Kamarupa squarely places the lingam in what is Assam today. Indeed, there is a Bhimashankara jyotirlingam near Guwahati. Not too many people have heard of it, not even those who reside in Guwahati. There are few visitors and no temples. At least, there isn’t a temple to Shiva. There is one to Ganesha and another to Vishnu. When I visited it recently, there was only another family that was around. Bang in the middle of the forest, with the lingam in the midst of a waterfall, it is worth a visit, regardless of which is the real Bhimashankara jyotirlingam.