My Name Is Anthony Gonsalves

The Goa of Hindi cinema is India’s internal exotica 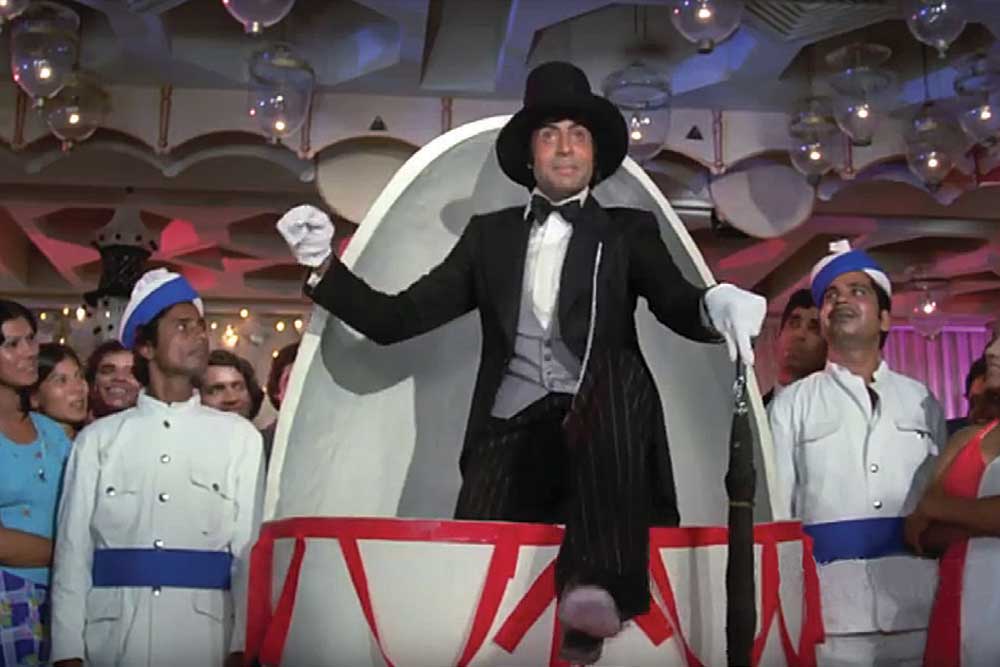 “MY NAME IS Anthony Gonsalves,” sings Amitabh Bachchan (or, rather Kishore Kumar), after he jumps out of a huge Easter egg at the Catholic Gymkhana. Manmohan Desai’s wonderful Amar, Akbar, Anthony is a crazy caper about national integration. Three Hindu brothers, separated on August 15th under the statue of Mahatma Gandhi, are each brought up in a different religion: Amar as a Hindu, Akbar as a Muslim and Anthony as a Christian. The character’s real Hindu name is elided in the film, and we are not told it, but Anthony Gonsalves is said to be the name of a musician in the film industry.

Anthony, despite a ‘foreign-sounding’ name, is as much an Indian as the other brothers, and is as much a star, being played by arguably the greatest superstar in Hindi film history; but he manifests specific characteristics that mark him as a Christian, beyond being, as he says, a friend of Jesus. He is raised by a Roman Catholic priest in Bandra, a suburb of Mumbai long associated with Goans and the Portuguese, known now as a home for the film industry, expats and hipsters. His name indicates he is Goan although like other Goans in Hindi films, he speaks no Portuguese or Konkani but a mixture of Bambaiyya and English. He speaks the most English, happily mixing a speech by Benjamin Disraeli (Britain’s only ever ethnically Jewish Prime Minister, though a convert to Christianity), “You are an intoxicated rhetorician….” into his nonsensical dialogue. He is a drinker who claims to have a liquor licence though seems more of a smuggler, and one who donates half his income to the Church.

I was asked to speak about portrayals of the Portuguese in Hindi films at a conference on the visual culture of imperial Portugal in Lisbon earlier this month. I thought instead to look at how Goa and Goans, in Goa and beyond, are shown as exotic within India rather than examining Orientalist images from West to East or Occidentalist images in reverse.

I am not familiar with the 45 or so Konkani films, or others which show Goans, but with Hindi films, which are made in Mumbai with its own Goan population in an industry where Goans have featured mainly as musicians. Hindi films mostly use archetypes and stereotypes in their portrayal of regions, castes and class, against the norm of the upper class, upper caste Hindu, so Goans in films have to perform as Christians of a particular type. Goa is not a Christian majority state, but at 25 per cent to the national 2.3 per cent has a high proportion of Christians among its population. The filmi Goan is usually Christian but not very Portuguese.

A handful of films show the Portuguese in India, mostly in the context of the freedom struggle (Jaal, 1952; Pukar 1983—set in Portuguese Goa; while Saat Hindustani, 1969 and Trikaal, 1985 are largely set in 1961), which is surprising given the length of Portuguese rule in parts of India: Vasco da Gama was the first Portuguese in India, reaching Calicut in1498, while Portuguese rule in India lasted longer than any British rule, from 1505 to 1961; based in Goa after 1510, the Portuguese governed the Indian Ocean and beyond until the mid-19th century. After 1947, when India became independent from the British, Portugal kept Daman and Diu along with Goa until the ‘Liberation of Goa’ in 1961. Portugal recognised the independence of these territories in 1975 after the fall of the Second Republic. Goa, Daman and Diu became Union Territories, but in 1987 Goa became 25th state of the Indian Union.

Several films have Goan characters, while many are set in Goa, though usually showing tourist images of beaches and hotels along with some exoticism deriving from its Portuguese-Christian heritage, notably churches. Examples include Julie (1975), Ek Duuje Ke Liye (1981), Khamoshi (1996), Dil Chahta Hai (2000), Guzarish (2010) and the Golmaal series.

The characters rarely speak Portuguese or Konkani, the main official language of Goa, but, like other Indian Christians, speak English. Portuguese remains mostly in their names, although first names are now often Anglicised or ‘Indianised’. Goan food, which is thought of as Portuguese, is mostly unknown in Portugal, although pao, bread, is common to both, as is pudim, which as (caramel) custard, has conquered much of India, or at least the clubs. One of the great legacies of the Portuguese is the introduction of the cashew, although I am yet to be convinced of the delights of Feni.

Films do not show two of the most interesting Portuguese legacies, which are in law. Goa has Napoleonic Law, including land ownership in the comunidade system, as many second home buyers have found to their dismay, while it has a uniform (Portuguese) Civil Code, unlike the rest of India.

Two of my favourite Hindi films have Goan connections. Bobby (1973), directed by Raj Kapoor, whose heroine Bobby Braganza finds her way into other films such as the teacher Miss Braganza in Kuch Kuch Hota Hai (1998), has much of the Goan feel, while Amar, Akbar, Anthony (1977) directed by Manmohan Desai, stars Amitabh Bachchan as a Bandra Goan.

The film seems fresh even today with its focus on teenage romance. Bobby wore bikinis, miniskirts and clothes which seemed outrageous at the time, but her innocence and her Christian ‘foreignness’ accounted for this permissiveness. The film sparked a host of young romances, from Love Story to those of the 1990s where love was about friendship, building on Bobby’s line, “Mujhse dosti karoge?” (Will you be friends with me?).

A typical view of Goan culture is seen in celebrations with typical buildings, music and dress. Bobby’s father, Jack Braganza, is a good-natured drunk, while her grandmother is a stern guardian of family morals and a critic of the lack of attention to family values in Raj’s family. The boy’s wealthy (Hindu) family object to Bobby because of class, but there is no mention of religious differences between the couple. Christianity, which had been much discussed by 19th- century reformers as a model for a reformed Hinduism, from Gandhi to Swami Vivekananda, is now seen as fairly neutral, not as the ‘Other’, as Islam was.

In Amar, Akbar, Anthony, a Christian in a film about national integration, Anthony Gonsalves seems to be named after the Goan musician, one of many who scored film music, played Western instruments and who exemplified the hybridity of film music.

Goans are one of many Christian groups, present in India from at least the 2nd century CE if not longer. Although a tiny minority, their role in education and health make them widely known, neither of which is seen in Amar, Akbar, Anthony, where the only Christian institution is a church. Goan Christians are Roman Catholics with a Portuguese culture but also a strong Jesuit influence. In the film, Goan Anthony is clearly different from Anglo-Indians, who include baddies—Robert and Zabisco—but also such goodies as Robert’s twin, Albert, who lives overseas where the heroine Jenny, Robert’s daughter, goes to study.

These two classic films date from the 1970s, perhaps with the rise of domestic tourism and following the hippy invasion of Goa, which made it even more exotic. Nowadays it has many often conflicting images, a cool and casual tourist destination, home of mass and crass tourism, a place of great heritage, of beautiful beaches, bars and restaurants. Goa attracts literary elites and the chattering classes from Mumbai and Delhi who are buying houses, running literary festivals, attending India’s main international film festival. The state exudes a relaxed cool typified by the fashion designer Wendell Rodricks.

Goa, like Kashmir in films, is a beautiful space with traces of the Portuguese and others, but is largely peopled by stereotypes of Christians. Goans in and out of Goa are seen as drunks with women as nurses and secretaries, dubbed ‘Sandra from Bandra’. Goa’s status, as seen in films, is one of India’s internal exotica—not an Orientalism or an Occidentalism, but an idea of exotic regionalism and different histories of somewhere that is not quite India. Hindi films eschew realism, so it is not surprising that their image of Goa shows so little of Goan culture. This has to be found in films such as Shyam Benegal’s Trikaal, or in writings such as those found in Jerry Pinto’s 2008 anthology, Reflected in Water.

In today’s India, where Goa has a BJP Chief Minister, its Roman Catholic and Portuguese heritage may or may not merge into the new idea of Indianness. There are long traditions of assimilation, notably in religion, where the Church used an Inquisition to root out Hindu influences, and in the popular Goan song, Que Sera Sera (whatever will be, will be).

I have had a great year visiting Portugal, Brazil and Goa. As a Brit, I’ll be eating hot cross buns, chocolate Easter eggs and Simnel cake, but I’d like to wish Happy Easter (not ‘Happy Good Friday’ as I have been wished in India) to all my Roman Catholic Goan friends and anyone else who, like me, would be delighted if Anthony Gonsalves jumped out of their egg.