Dancing in the Dark

It’s the rhythm of life in Hindi cinema 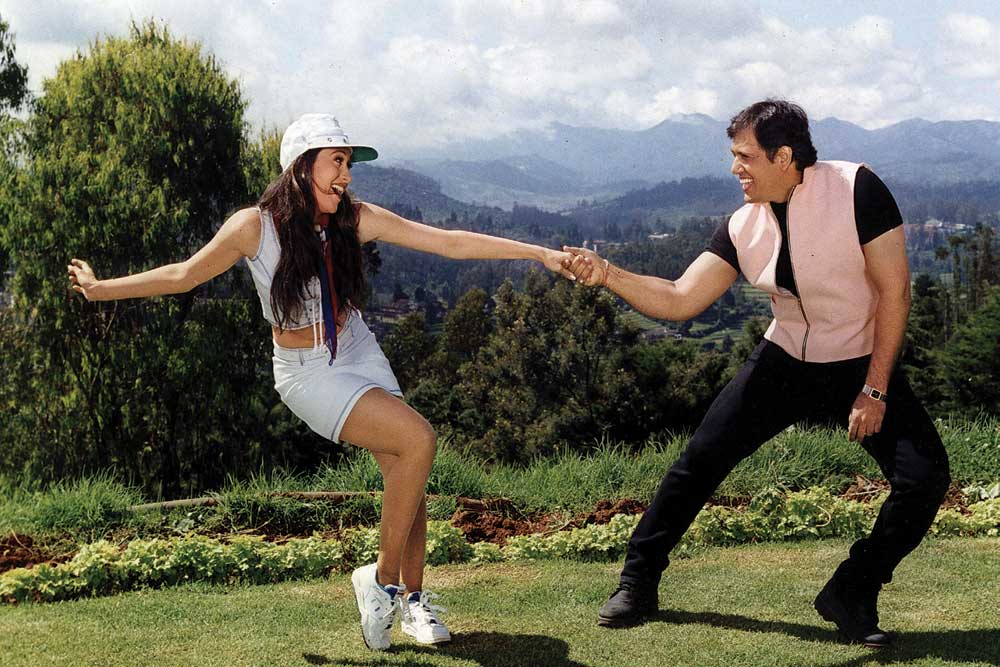 NEVER BELIEVE ANYONE who says they don’t like dancing. It’s so much part of what it means to be human, an instinct like poetry or music. While some people must have been put off dancing for some reason or another, it’s never too late to rediscover it.

I was entranced by the ethereal beauty of ballet as child. My father pointed out I didn’t have the figure for ballet, as I was what might politely be called ‘sturdy’ rather than sylph-like, so I was sent for Scottish Highland dancing where my enthusiasm and figure matched the more vigorous sword dances and flings. I wish he were alive so I could tease him about his being politically correct in making me a heritage student true to my—or rather his—ethnicity. The medals I won were really for bravery as I had to wear a kilt and get on stage to leap over swords next to a man in a kilt playing bagpipes. I apologise to Scotland.

At school we learnt ballroom dancing, waltzes, polkas and more. Years later when I went to a ball, my partner and I started a fight straightaway before I remembered that as one of the taller girls at an all-girls school, I had been taught to lead, so my poor partner and I were in competition rather than in harmony. Sturdy girls.

Pogoing as a punk wasn’t very easy for a sturdy girl, never mind the potentially lethal consequences for bystanders, but the joys of disco and whatever passed for dancing at university were unbounded, perhaps helped by a tipple or two.

Dance was one of the many reasons I fell in love with India. Indian classical dancing seemed the opposite of ballet with the bare feet firmly connected to the ground rather than trying to float above it on points. The expressive facial gestures and hand gestures and songs and music were immediately appealing. I know so little about it but simply enjoy it as a true amateur.

Bad Kathak is ghastly but an elegant performer can suddenly take one’s breath away with a delicate and refined eroticism. The drag queens of London’s Club Kali, some also rather sturdy, performed more overtly sexual dances which brought joy to their audiences.

Hindi cinema has its mix of dances, some of great beauty, some hilariously bad. It would be hard to pinpoint precisely what Hindi film dance style is; like the music, it’s hybrid through and through, bringing together any form from jazz, disco, ballroom to Indian classical, folk and others. Hindi film dancing has influenced all public dancing, from the nightclub/disco to wedding and other forms.

The earlier films were limited by recording technology and it was playback singing which liberated dance. The great spectacular numbers remain astonishing, particularly Sitara Devi’s dance on a giant keyboard in K Asif’s Phool (1945), and the drum dance in SS Vasan’s Chandralekha (1948).

In the 1950s, Raj Kapoor, whom I associate most with the waltz, had a natural ease, while Guru Dutt brought a dancer’s grace to all his movement. Dev Anand just walked. Did Dilip Kumar dance? I like to think not, but his face expressed dance in a way that meant it didn’t matter.

I don’t remember Rajesh Khanna dancing, though some great RD Burman songs had him walking-dancing-emoting. Some of the stars were wooden, but who cared about Zeenat’s dancing in Aap Jaisa Koi (in Feroz Khan’s Qurbani, 1980), with that face, figure and that red dress?

Rishi Kapoor had the family’s natural elegance and lightness on his feet so, even when he became sturdy, he still wiped out the hunks in Radha (in Karan Johar’s Student of the Year, 2012), and reminded us why he was so closely associated with the qawwali in Karan Malhotra’s Agneepath (2012). Mithun Chakraborty as the eponymous Disco Dancer (directed by Babbar Subhash, 1982) owned disco in India as well as across the former Soviet Union.

Amitabh Bachchan’s style was imitated across India as the great star, no natural dancer, showed a panache that all could emulate. Sridevi, another great actor, gave comic performances such as Hawa Hawai ( in Shekhar Kapur’s Mr India, 1998) and a dance of passion in Yash Chopra’s Chandni (1989) whose success can be measured against Prosenjit’s dance of passion, (known to me only via the internet as ‘Prosenjit’s dance’), a rival for the worst dance of all time.

Madhuri made outrageously sexy dances elegant and lovely while Hrithik brought a new mobility and vigour. Shah Rukh made raising his arms in the air one of the great dance moves, while Salman brought fun and silliness, his Munni Badnaam Hui ( in Abhinav Kashyap’s Dabangg, 2010) displaying a series of knowingly atrocious moves.

For me, the king of Hindi film dance is Govinda. Govinda’s perfect timing and his line makes him one of the greatest Hindi film dancers of all time. He adds the filmi features of an expressive face, a big smile that shows his pleasure in dancing, and his outrageously bad taste in costumes only enhances his fun image.

The cheesy film songs of the 1990s are among my favourites, and Govinda’s dances embellished them further. He often performed duets, some of the best being with Karisma (those Kapoor dancing genes again). In most of his roles, Govinda played a comic innocent man-child who falls in love without holding back. He looks at the girl, and they run apart, while a crowd of dancers in gaudy costumes appears even if they have been alone on a hilltop, and the courting ritual begins. Somehow the cheapness gives it greater value (as Noël Coward notes, ‘[It’s] extraordinary how potent cheap music is’). The couple dances vigorously, with long shots of the backing dancers, mid-shots of the couple and close-ups of the winks and grins. There is a whole repertoire of facial expressions, my favourite being the look of surprise that changes into a smile. With Govinda, that often then turns into a bashful expression where he then looks down like a good bahu, then looks again at the heroine and smiles. This is truly the language of the Hindi film dance. The slender boy of Superman became solid—dare I say sturdy—but always retains a lightness on his feet with the grace of a truly natural dancer.

Dancing in Hindi film is one of its great attractions, one of its many features which entertains without being part of the narrative. Often the song (and most dances are to songs) fulfils the role of sexual display with beautiful energetic bodies, although never naked but with often many costume changes and exotic locations adding to the heightened sensibilities of the moment. Item numbers are often thrown into films to add eroticism and spectacle. Yet who can forget that some of the most erotic songs of Hindi cinema are those of Kamal Amrohi’s Pakeezah (1971), where Meena Kumari is seated, covered and veiled, her eyes, her expressions and the music, the lyrics and the settings making its songs so memorable.

I had better not compile a list of the worst dances and dancers. However, my all-time favourite is Sunny Deol in Yaara O Yaara (in Raj Kanwar’s Jeet, 1996). After some rather good running around, he stamps his feet in a way that must have surely made the gods anxious to know what was happening down below. Sturdiness is a problem for even the great Punjabi hero.