Freedom is the ultimate reward of yoga 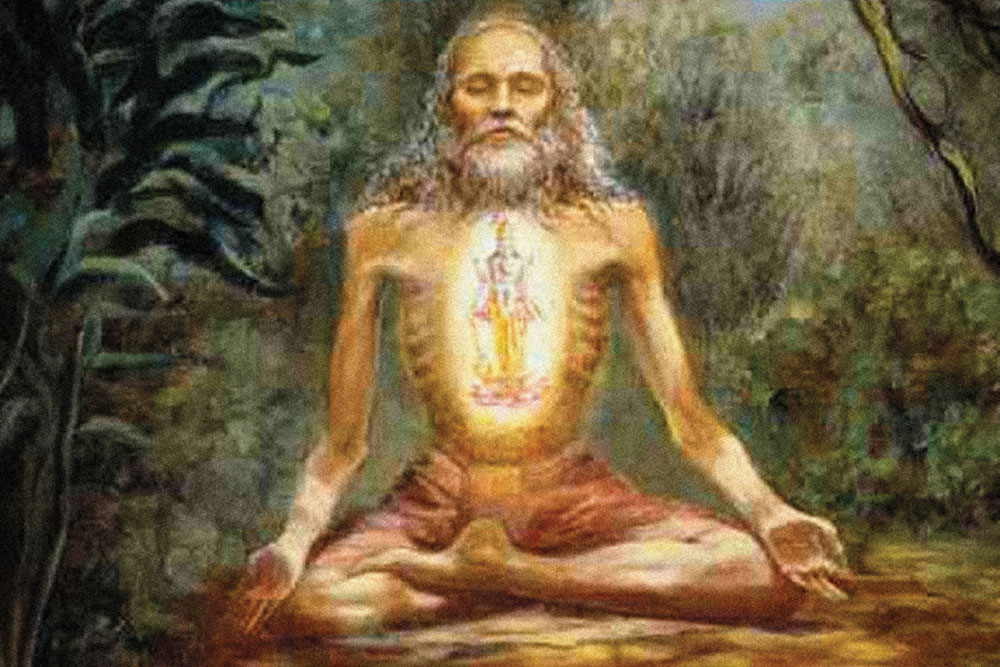 IN EARLIER COLUMNS, I have recounted a conversation between a siddha Brāhmana and Kashyapa, from the Anu Gita. Let me now conclude that dialogue.

The siddha Brāhmana continued, ‘The atman is independent of the five elements. It is without form and without cause. Though it enjoys the gunas, it is devoid of gunas. A person who sees it in this way is emancipated. He uses his intellect to cast aside all resolutions of the body and of the mind. Like a fire that is without kindling, such a person gradually obtains nirvana. He is freed from all samskaras and obtains the eternal brahman. He obtains the supreme, which is tranquil and stable. This is the divine Akshara.’

‘Thereafter, I will tell you about the supreme and sacred texts of yoga. Knowing this, in this world, yogis become siddhas and see their own atmans. I will convey the instructions accurately, as I see them. Listen to me. By always following this conduct, one passes through those doors and sees the paramatman within the jivatman. The senses must be restrained. The mind must be fixed on the atman. Having first tormented oneself through terrible austerities, one must then undertake this yoga. An ascetic abandons all resolution. He is devoid of pride and ahamkara. A learned Brāhmana uses his mind to see the paramatman within his jivatman. Devoted to good conduct alone, he sees the paramatman within his jivatman. He is always full of restraint. He is united with his atman. He conquers his senses. Such a virtuous person, engaged in yoga, sees the paramatman within his jivatman. In a dream, a man may see someone and recognising him on waking up, exclaim, ‘This is he.’ In that way, a virtuous person engaged in yoga sees the form of the atman. When the outer case is extracted from munja grass, the strand inside can be seen. In that way, taking away the body, the yogi sees the atman. The outer case of the munja grass is like the body. The inner strand is the beautiful atman. Those who know about the excellent texts of yoga cite this as an example. When a person with a body is united with yoga and sees the atman properly, there is no one who can bring him down. He is like a lord of the three worlds. As he wishes, he moves from one body to another one. Without any joy and without any grief, he withdraws himself from the phenomena of old age and death. Such a person, engaged in yoga, can obtain the status of a deva over all devas. Casting aside this temporary body, he obtains the undecaying brahman. Even if all the worlds are destroyed, no fear is generated in him. Even if all creatures are afflicted, he is not afflicted in the least bit. A person who uses yoga to unite with his atman is without desire and is tranquil in his mind. He is not disturbed by sorrow, misery, fear, terror or the affection that flows from attachment. Weapons do not pierce him. There is no death for him. There is no one in the world who is happier than him. Having properly engaged himself in yoga, he looks at his atman. Indra himself wishes to be like him. If one has engaged in yoga, one obtains a state of indifference and there is nowhere else to go to. This requires singleminded devotion to yoga alone.’

‘Listen to how one must embark on yoga. Whichever city one resides in, one must first think of a direction one has seen before. [The city stands for the body. A direction probably refers to the part of the body one is focusing on, such as a chakra within the body.] The mind should be fixed inside the city, not outside. Whichever city he resides in, he must faithfully reside within it. In that abode, the mind must be taken away from external and internal distractions and fixed on that habitation. All the thoughts must then be withdrawn and fixed on the body one inhabits. The mind must be fixed on the body, never on anything outside it. One must singlemindedly fix all of one’s thoughts inside the body. One must meditate on the teeth, the palate, the tongue, the throat, the neck, the heart and the arteries and veins inside the heart.’

‘O Madhusudana! [There is abruptness in the text. This is now the Brāhmana who is speaking to Krishna and we realise that this Brāhmana and the siddha Brāhmana are identical, though there was nothing to suggest this earlier.] Thus addressed by me, the intelligent disciple again asked me about moksha dharma, which is extremely difficult to explain. ‘How is the food, eaten every once in a while, digested in the stomach? How does it become juices? How is blood generated from that? How does this sustain flesh, marrow, sinews and bones? How do all the limbs of embodied creatures grow? As one keeps growing, how does the strength increase? How is waste that is without substance separately excreted? From where does one inhale and exhale? Within one’s own self, which part of the body is inhabited by the atman? How does the jivatman exert itself and move the body around? What is the complexion of the mind and where does it dwell? O illustrious one! O unblemished one! You should describe this to me accurately.’ O Madhava! I was asked this by that Brāhmana’


One must singlemindedly fix all of one’s thoughts inside the body. One must meditate on the teeth, the palate, the tongue, the throat, the neck, the heart and the arteries and veins inside the heart

‘O mighty-armed one! O scorcher of enemies! Based on what I had heard, I replied. ‘If one has a vessel full of riches, one places it in a room and uses one’s mind to guard it. In that way, the mind unwaveringly be used to guard against the gates within one’s own body. One must fix it on the path that leads to the atman and discard all carelessness. If one always exerts in this way, one will soon find delight in the atman. One will see and obtain the brahman and become knowledgeable about Pradhana. It cannot be grasped with the eyes, or with all the other senses. The brahman can be seen with the lamp of the mind. His hands and feet are in all the directions. His eyes, head and faces are in all the directions. The creature sees the atman, extracted from the body. Having abandoned the body, he is sustained only by the brahman. As if smiling in delight, he sees the atman with the help of his mind. O supreme among Brāhmanas! [There seems to be a minor inconsistency, because the siddha Brāhmana is now speaking to Krishna. However, he is also repeating what he told Kashyapa.] I have now told you about all the mysteries. O disciple! I grant you permission. Cheerfully, go wherever you wish to.’ O Krishna! Having been thus addressed, my immensely ascetic disciple, the Brāhmana, went away as he desired, his doubts having been dispelled.’

All this was repeated by Krishna to Arjuna. Therefore, Krishna concluded. Vasudeva said, ‘O Partha! These are the words the bull among Brāhmanas spoke to me at that time. These were appropriate words for those who wish to resort to moksha dharma. He then disappeared. O Partha! Have you heard this truth with singleminded attention? This is exactly what you heard when you were on your chariot. It is my view that a man who is not accomplished in consciousness, is not learned and has not cleansed his atman will be confused about this and will find it extremely difficult to grasp it. O bull among the Bharata lineage! This is a great secret even among the devas. It is rare for any other mortal to have heard it, anywhere. O unblemished one! No human other than you deserves to hear it. A person whose atman is confused will not be able to comprehend it easily. O Kounteya! The world of the devas is full of those who observe rites. For those who have mortal forms, the devas disapprove of withdrawal from sacrifices. [In such an event, the devas will not get their shares and humans will also become like devas.] The eternal brahman is the supreme destination. One obtains immortality there, abandoning misery. One is always happy. O Partha! If they resort to this dharma, those with evil births, women, Vaishyas and Shudras, also go to the supreme destination, not to speak of extremely learned Brāhmanas and Kshatriyas, who are always devoted to their own dharma and to the object of obtaining Brahma’s world. This has been indicated in the reasons and means for that pursuit. There are determinations about misery and the successful obtaining of the fruits of moksha. O bull among the Bharata lineage! There is no bliss that is superior to this. O Pandava! A man who is learned, faithful and brave, one who abandons the insubstantial practices of the mortal world can use these means to quickly obtain the supreme destination. This is all that needs to be said and there is nothing more. O Partha! This becomes evident if one steadily practises yoga for six months.’