True knowledge is realising the oneness of everything 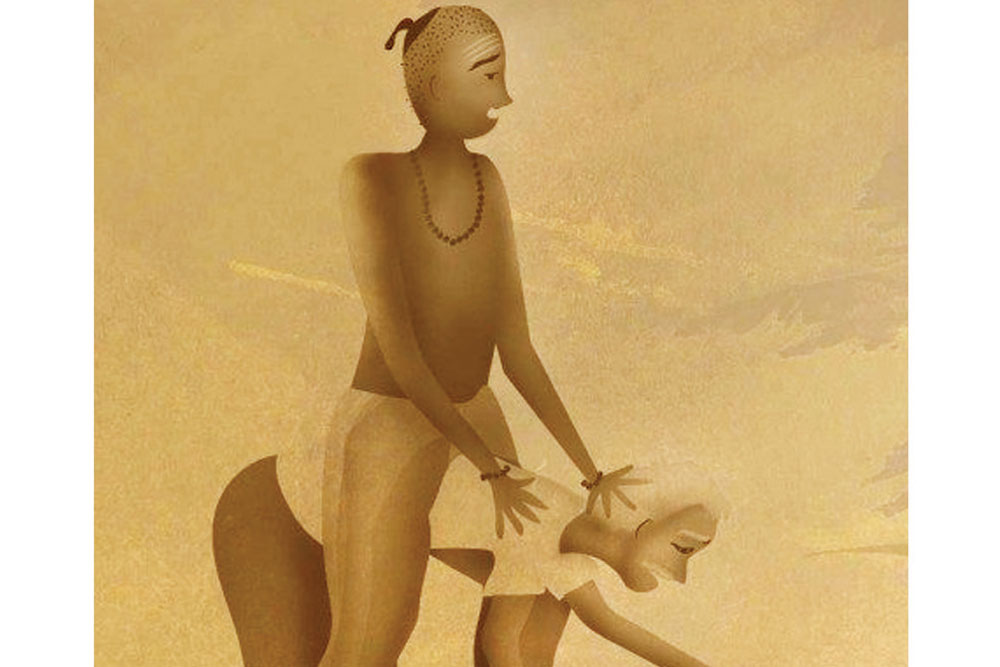 STORIES FROM THE Puranas have a tendency to get recycled over and over again. That is, people often pick the same stories to retell and one encounters the same protagonists repeatedly. Therefore, here is a somewhat unusual story about Ribhu and Nidagha, from Vishnu Purana. It isn’t a story one normally hears of.

Brahma had a son named Ribhu. Ever since birth, he was virtuous and knew about the truth. In those ancient times, his disciple was Nidagha, Pulastya’s son. Full of great affection, he bestowed all the different kinds of vijñana on him. (There is a subtle nuance in this statement. Jñana is what is learned from gurus and sacred texts. Vijñana results from internal self-realisation, though the two terms are sometimes used synonymously.) Ribhu had no doubt that once Nidagha had obtained knowledge, the latter would no longer have any sense of duality.

On the banks of the Devika (a river near Udhampur in Kashmir), there was a city known by the name of Viranagara. It was prosperous and extremely beautiful. Pulastya lived there, in a charming grove that was on the outskirts. Nidagha knew about yoga. He resided in that city for 1,000 divine years. After this, Ribhu went to visit his disciple, Nidagha. A sacrifice to the Vishvadevas was going on and as it was about to end, he stood near the gate. Nidagha noticed him standing there. He took some arghya (a gift for a guest) and made him enter his house. When he had washed his hands and feet and had accepted a seat, he lovingly asked him to eat. Ribhu said, ‘O noble Brhmana! What food, capable of being eaten, exists in your house? Please tell me. I have never been fond of inferior food.’ Nidagha replied, ‘Saktu, food made out of barley, vatakas and apupas exist in my house [Saktu is pounded ground meal, colloquially known as sattu, vataka is a small cake, apupa is a sweet cake].’ As you wish, eat whatever pleases you.’ Ribhu said, ‘For Brhmanas, this is inferior food. Give me sweet rice, payasam made out of barley, mixed with phanita [Payasam is a dish made out of sweetened milk and rice, phanita means molasses].’ Nidagha responded, ‘O housewife! Use what is best in the house to prepare sweet food for him to enjoy.’ His wife was thus instructed to prepare sweet food for the Brhmana. Honouring her husband’s words, she prepared it. She placed this sweet food before the great sage. While he ate, Nidagha stood humbly before him. When he had finished, Nidagha spoke. Nidagha said, ‘O Brhmana! Are you greatly satisfied with the food? Are you content? Did the food you ate bring you mental pleasure? Where do you live now? Where are you going? Why have you come here?’ Ribhu replied, ‘When a hungry man has eaten food, he must be satisfied. Why are you asking me if my hunger has been satisfied? When something made out of earth is scorched by the digestive fire, hunger is flung out as a consequence. When the water has been exhausted, thirst is generated in men. Hunger and thirst belong to the body. I have no sense of ownership in them. When hunger results from a deficiency, I must always act so as to satisfy it. However, the welfare and satisfaction of the mind have to do with the dharma of consciousness. Therefore, you should ask about the consciousness. You asked me—where do I live? You also asked me—where am I going? Your third question was—where have I come from? Listen to my words. The atman goes everywhere. It pervades everything. It is like space. Whence have I come? Where am I? Where will I go? Do such questions make sense? I do not go. I do not come. There is not a single place where I reside. You are not different from someone else. Nor is someone else different from you. Nor are they different from me. No doubt you have a question about sweet food versus food that is not sweet. When one is eating, what is sweet and what is not sweet? If sweet food causes anxiety, it is no longer sweet. Food that is not sweet becomes sweet when sweetness causes anxiety to a person. What food is pleasing at the beginning, the middle and the end? [At the beginning of a meal, food may seem to be sweet. When one has eaten some of it, it seems less sweet. When one has eaten too much, it no longer seems sweet.] A house made of earth becomes stable when more mud is plastered on it. In this way, the body is made out of earth and the earth is made out of paramanus. Barley, wheat, mudga (moong dal), ghee, oil, milk, curds, molasses, fruit and other things are made out of atoms of the earth. In thinking about food that is sweet and food that is not sweet, this is what you must understand. Your task is to have this parity in your mind. This equilibrium is the path to emancipation.’ Having heard these words about the supreme truth, Nidagha prostrated himself before the immensely fortunate one and addressed him in these words. ‘O Brhmana! For the sake of my welfare, please show me your favours. Please tell me the truth about who has come here. [There was no reason for Nidagha not to recognise Ribhu. Therefore, Ribhu must have appeared in the disguise of an ordinary Brhmana.] Hearing your words, all my delusion has been destroyed.’ Ribhu replied, ‘I am Ribhu, your preceptor. I have come here to impart wisdom to you. Now that I have told you about the supreme truth, I shall leave. Know that in this entire world, there are no differences.’ Thus addressed, Nidagha prostrated himself before him. Ribhu left.


The atman goes everywhere. it pervades everything. It is like space. Whence have I come? Where am I? Where will I go? Do such questions make sense? I do not go. I do not come. There is not a single place where I reside. You are not different from someone else. Not is someone else different from you. Nor are they different from me

After 1,000 years had passed, Ribhu again went to that city, to impart knowledge to Nidagha. The sage saw a king entering the city, surrounded by a large army. He also saw the immensely fortunate Nidagha standing outside the city, some distance away, so as to avoid contact with the people. His throat was parched and he was hungry. He had collected kindling and kusha grass from the forest. On seeing him, Ribhu approached and greeted him. [In disguise again.] He asked, ‘O Brhmana! Why are you standing here, alone?’ Nidagha replied, ‘Since the king is entering the beautiful city, there is a great assembly of people. Therefore, I am standing here.’ Ribhu asked, ‘Tell me, who is the king? Who are the other people?’ Nidagha replied, ‘There is one who is astride that crazy and mighty elephant, as large as the summit of a mountain. He is the king. The others are his attendants.’ Ribhu said, ‘You have shown me the king and the elephant together. You have not described any specific signs whereby I can distinguish between them. Therefore, tell me what is specific to each of them. I wish to know which one is the elephant and who is the king.’ Nidagha replied, ‘O Brhmana! The elephant is the one who is below and the king is the one who is above. Who does not know the difference between the mount and the one who is borne?’ Ribhu replied, ‘I know that, but please explain it to me. What does the word ‘below’ mean and what is ‘above’?’ As soon as he said this, Nidagha suddenly leapt up onto Ribhu’s shoulders and said, ‘Hear the answer to the question you have asked me. I am above, like the king. You are below, like the elephant. To make you understand, I have demonstrated with the use of this example.’ Ribhu replied, ‘You are like the king and I am like the elephant. But please tell me, which one is you and which one is me?’ Thus addressed, Nidagha swiftly clasped his feet and said, ‘O illustrious one! You are certainly my preceptor, Ribhu. There is no one else with as clean and as polished a mind as my acharya. Hence, I think that I have obtained my guru.’ Ribhu replied, ‘I am indeed your guru, named Ribhu. Earlier, you served me. O Nidagha! Out of affection towards you, I have come here, so as to instruct you. O immensely intelligent one! Therefore, I have instructed you briefly. The essence of the supreme truth is that there is no duality in anything.’ Having said this, Ribhu, Nidagha’s learned guru, went away. Nidagha saw his own atman inside all beings, without any differentiation. The Brhmana thus merged into the supreme Brahman and obtained supreme emancipation.