Manifestations of Devi in the Markandeya Purana 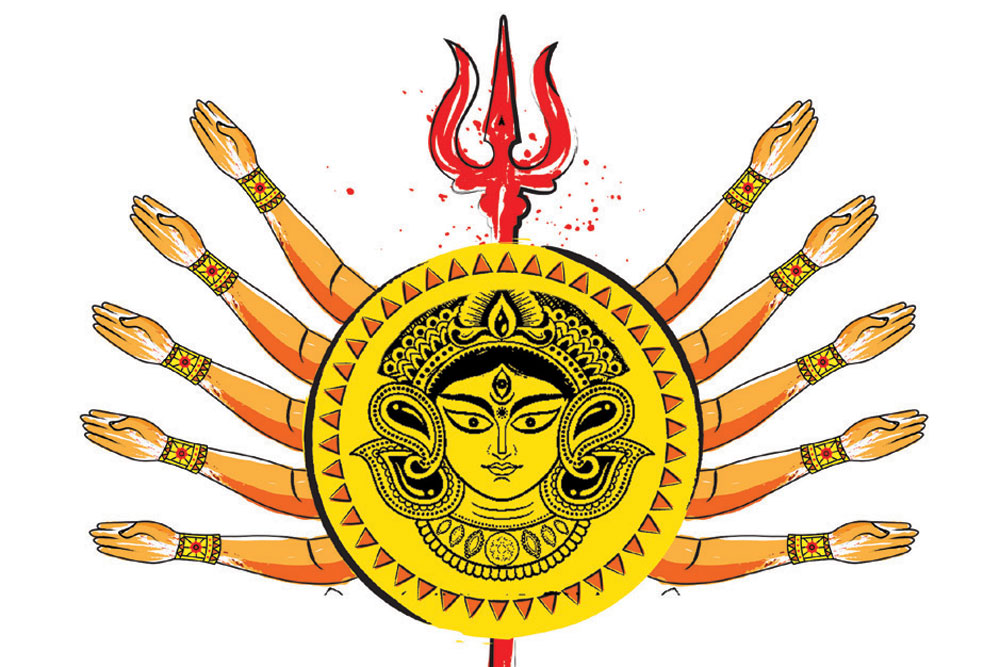 MANTRAS ARE FINE. But most of us love stories about Devi and Durga. Most of these stories feature in the Puranas. The Puranas are ancient accounts. According to belief, after classifying the Vedas and composing the Mahabharata, Krishna Dvaipayana Vedavyasa composed the Puranas. There are many Puranas. Some of these are major Puranas and are known as Mahapuranas. There are 18 of these, though sometimes, there is a little bit of disagreement about which text should be included in the list of 18. There is no disagreement that one of these Mahapuranas is the Markandeya Purana. Mahapuranas vary enormously in size and the Markandeya Purana is relatively short, with 9,000 verses or shlokas. It is impossible to determine when these Puranas were composed in their present form. After all, they were passed down orally, with continuous additions. In any event, the Markandeya Purana is one of the earlier ones, probably composed between 250 CE and 700 CE. It is known as the Markandeya Purana because the sage Markandeya answers questions asked by the sage Jaimini. Tucked into the Markandeya Purana are the sections known as ‘Devi Mahatmya’. By the way, the great scholar Hara Prasad Shastri (1853-1931) went to Nepal to collect manuscripts from the Royal Library there. He found a copy of Devi Mahatmya written in the old Newari script and dated 998 CE. It is not my intention to suggest that stories about Devi only occur in the Markandeya Purana. However, this column is about that text.

There was a king named Suratha. Enemies defeated him and drove him away from his kingdom. Desperate and despondent, he wandered off to a forest. There, he arrived at the hermitage of a Brahmana named Sumedha. Miserable, he met a Vaishya named Samadhi at the hermitage. He, too, had been robbed and driven out by his wicked wife and sons. Suratha and Samadhi went and asked Sumedha about the reason for their misfortune. Sumedha told them this was because of the delusion caused by Mahamaya. Like Suratha and Samadhi, we too would like to be told about Mahamaya. Who is she?
She is in everything. She is present everywhere. However, to accomplish tasks, she appears. We think she has originated. That’s not true. She is eternal and always present. It is just that she manifests herself occasionally. Most of us know about Vishnu sleeping and Madhu and Kaitabha. Brahma prayed to Devi so that she might save him and the universe. Thus, Vishnu killed Madhu and Kaitabha.

For Madhu and Kaitabha, Devi’s intervention was indirect, through Vishnu. For Mahishasura, with whom we associate Devi much more, the intervention was direct. The devas and asuras continuously fought with each other. At that point in time, the leader of the asuras was Mahishasura. The word mahisha means buffalo and Mahishasura is described as a buffalo demon. In other texts, not in the Markandeya Purana, we are told that Mahishasura’s father, Rambhasura, had intercourse with a she-buffalo. Born from this union, he became Mahishasura. The asuras performed austerities and obtained boons, typically from Brahma, making it impossible for them to be killed. In other texts, not in the Markandeya Purana, we are told Mahishasura obtained a boon from Brahma, to the effect that he could only be killed by a woman. In other texts, not in the Markandeya Purana, we are told that a beautiful Devi named Trikalaa emerged from the combined beauty of Brahma, Vishnu and Shiva and that Mahishasura fought with the devas because he coveted her. Regardless, the devas and asuras always fought and more often than not, the devas were ousted from heaven by a powerful asura. That is precisely what happened with Mahishasura too. Indra is a title. It isn’t a proper name. This particular Indra was named Purandara. Mahishasura drove him out and became Indra. He usurped the positions of the other devas too. With Brahma leading the way, all the devas went to see Vishnu. Shiva was already there. A mass of energy emerged from the bodies of the gods and united, manifesting itself in the form of Devi. The components of this energy led to the following formation of Devi’s limbs: Shiva’s energy—face; Yama’s energy—hair; Vishnu’s energy—arms; Moon’s (Soma’s) energy—the two breasts; Indra’s energy—the waist; Varuna’s energy—the shanks; Earth’s energy—the hips; Brahma’s energy—the feet; Sun’s (Surya’s) energy—the toes; Energy of the Vasus—the fingers; Kubera’s energy—the nose; Prajapati’s (Vishvakarma’s) energy—the teeth; Agni’s energy—the three eyes; Sandhya’s energy—the two eyebrows; and, Vayu’s energy—the ears.


Devi Mahatmya gives us three main stories about Devi’s manifestations as a result of depredations caused by Madhu/Kaitabha, Mahishasura and Shumbha/Nishumbha. Somehow, the Mahishasura account resonates more with us, probably because it was one against one

After this, all the deities gave Devi weapons and ornaments. Here is the list. This is a list of the major ones. Other deities gave her other weapons and ornaments. Only the major ones are specifically mentioned: Shiva—trident; Krishna—chakra; Varuna—conch shell; Agni—spear; Vayu—bow and a quiver filled with arrows; Indra—vajra and a bell from his elephant, Airavata; Yama—staff; Varuna—noose; Brahma—string of aksha beads and a water pot; Surya—filled the pores of her body with his rays; Kala (time/the destroyer) —a sword and a shield; Ocean of milk—sparkling necklace and garments that do not decay; Vishvakarma—assorted ornaments, a battle axe, weapons and impenetrable armour; Ocean—a lotus and a garland made out of lotuses; Himalaya—a lion as a mount and jewels; Kubera—a drinking vessel, never emptied of liquor; and, Shesha Naga—a garland made out of serpents.

Devi started to roar. The sound of that roar attracted Mahishasura and he came to see what was going on. When he saw Devi, a great battle started between Mahishasura’s soldiers and Devi. There were many great asura generals and to fight against them, Devi also created many ganas or attendants. After various soldiers and generals were killed, Mahishasura himself came to fight. He could assume whatever form he willed and not only fought in the form of a buffalo, but also in the form of an elephant and a lion, not to speak of his form as a man. Eventually, she pressed down on the throat of the buffalo with her foot and struck him with her trident just as he was about to emerge in the form of a man. When he had just about emerged partially, she sliced off his throat with a large sword and Mahishasura died. This is the picture we are often familiar with, from images and paintings—Mahishasura killed, when he had emerged only partially from the buffalo. Devi Mahatmya gives us three main stories about Devi’s manifestations as a result of depredations caused by Madhu/Kaitabha, Mahishasura and Shumbha/Nishumbha. Somehow, the Mahishasura account resonates more with us, probably because it was one against one. In the Madhu/Kaitabha story, Devi’s intervention was indirect, since those two were killed by Vishnu. In the Shumbha/Nishumbha account, which we will come to later, the confrontation was one against two. To get back to Mahishasura, once he had been killed, the gods prayed to Devi and eulogised her. Everyone rejoiced. Blessing the gods, Devi vanished, promising to appear again whenever there was a calamity.

Sure enough, two more great asuras, the brothers Shumbha and Nishumbha, caused a calamity again, driving the gods away from their positions. The gods prayed to Devi again. In all such prayers, Devi is addressed by different names. Different explanations are given for these names, and what I am stating now may be in apparent conflict with what you have heard. But do remember, at the moment, we are sticking to the Markandeya Purana.

She is known as Parvati because she is the daughter of the mountain named Himalaya. Hearing the prayer, she asked the gods, “Who are you praying to?” As soon as she said this, Shiva, also known as Ambika, manifested herself from the sheaths in Parvati’s body. “They are praying to me,” she responded. The word kosha means sheath. Having originated in this way, Shiva or Ambika came to be known as Koushiki. Once Ambika had emerged, Parvati turned dark and came to be known as Kalika, the dark one. She continued to live in the Himalayas. Meanwhile, Ambika assumed a beautiful form. Chanda and Munda, the servants of Shumbha and Nishumbha, saw her. They thought this beautiful woman should belong to Shumbha, the elder of the two brothers, and no one else. Messengers were sent. But Ambika told them she had taken a pledge. She would only marry someone who had defeated her in battle. Dhumralochana, a general in the asura army, was sent along with a huge army. Ambika killed Dhumralochana. Next, it was the turn of Chanda and Munda and their armies. While that battle was going on, Ambika’s face turned dark with rage and Kali, terrible to behold, emerged from her forehead. It was Kali who killed Chanda and Munda. Having killed them, she brought the heads to Chandika and told her, Shumbha and Nishumba would have to be killed by Chandika. Chandika is also one of Ambika’s names. All these different names need not confuse us. All of them are Devi’s manifestations. With their large armies, Shumbha and Nishumbha came to fight. Chandi and Kali had support. Energies of different gods assumed the form of goddesses and fought against the asuras—Brahma’s energy as Brahmani, Maheshvara’s (Shiva’s) energy as Maheshvari, Kumara’s (Skanda’s) energy as Koumari, Vishnu’s energy as Vaishnavi, Narasimha’s energy as Narasimhi, Indra’s energy as Aindri, and so on. Eventually, Shumbha and Nishumbha were killed.