×
Columns | History of the Present

The End of Emotionalism

Development is the only alternative 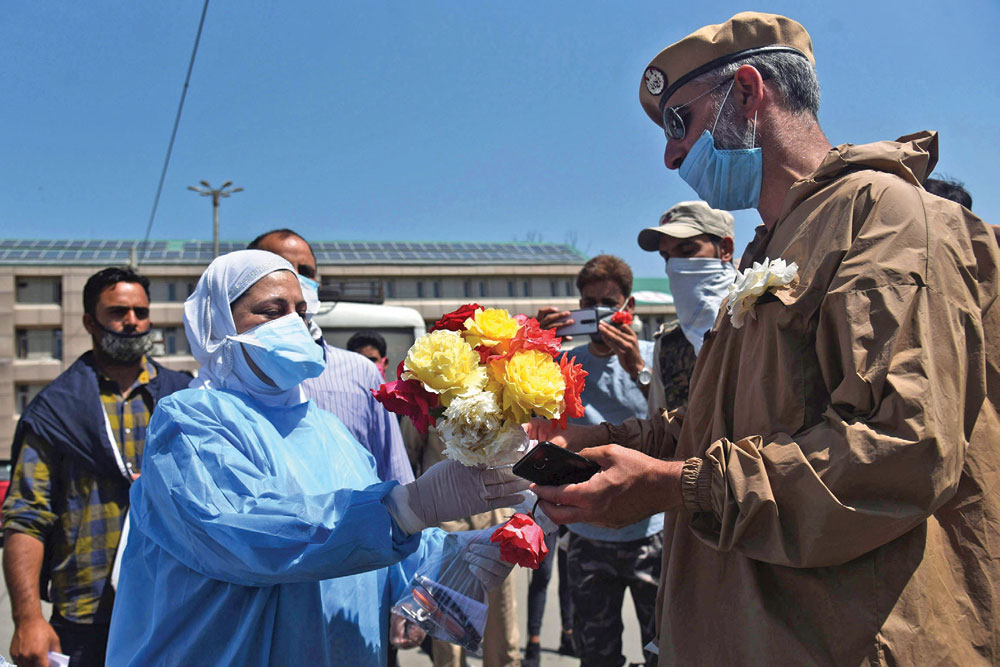 A police officer offers flowers to a health worker in Srinagar, May 27 (Photo: Getty Images)


GOVERNMENTS DON’T DO small print in their messaging. There is a psychological baseline in advertising which believes that the heavier a font the more likely you are to be believed. A typeset shout has too long a history for it to be easily finessed. People think you have something to hide or, worse, allege when you whisper.

And yet, it was the comparatively small print which caught my eye in the traditional brochure brought out by Jammu and Kashmir to mark the first anniversary of its transformation into a Union Territory. The subject in discussion was critical to any test of good governance: Jobs for Youth. The large print mentioned that 10,000 posts had been filled and 25,000 more jobs were in the short pipeline. But it was a less visually apparent ‘special weightage’ clause which caught my eye.

It said that ‘Candidates whose family member neither is nor has been in government service’ would now be given priority in hiring.

Think about it. This marks a radical reversion of an operational law of government hiring across the land: nepotism.

Nepotism has been one of the biggest burdens of government over the last seven decades of Indian democracy. In the first phase, it was largely restricted to the lower tiers of government, before it crept and then raced up the power ladder. A principal endeavour of most inside the comfort zone of job security, or the rewarding realm of politics, has been to get an offspring or relative into the system before age opens the departure gates. In many places, this had evolved from timorous claim to aggressive entitlement.

Here is a conscious clause which says that in Jammu and Kashmir preference will be given to those who do not have a family member in government. The temptation to use an exclamation mark at the end of the previous sentence is almost irresistible.

In 1957, a Yugoslav Communist theorist, Milovan ilas, authored a book called The New Class: An Analysis of the Communist System. He argued that the communist structure, in theory an advocate of classless society, had formed a new class of party and state officials which used, enjoyed and disposed of national property and resources for its own convenience rather than the national good. India went many steps ahead of Yugoslavia and the Soviet bloc. In Kashmir, the small circle of self-generating political and bureaucratic elite quietly used emotionalism to appropriate government funds to the extent that it could, and left most of the rest in a purgatory of neglect.

In that cross-party dispensation acquisition, seepage, waste and inertia became the four clogs that blocked or eroded development. Funds would be announced, and sanctioned, but only a trickle reached the people. One could cite many examples. But nothing was more egregious than the sheer inertia of government after the devastation of the 2014 floods in Srinagar. It epitomised a disease that was destroying the body politic. This could not have happened without protection, or indeed participation, by the political elite, who loved the flavour of cream even more than they enjoyed the taste of cake. The Kashmiri people had to make do with token gestures.

How was this economic injustice sold to the people? Behind a veil of sanctimonious emotionalism, with identity-politics at the core of the multi-party cover-up. No one in Delhi had the will to interfere with an unsustainable maladministration, heavily invested in stagnation. The people’s frustration, whenever it simmered, was easily diverted into emotional violence.

As course correction, this small step against nepotism, accompanied by some large strides in development, was long overdue.


The most impressive gains have been in health and power. An outlay of Rs 7,500 crore, with Rs 881 crore for upgradation, has already seen 60 projects completed, and another 80 ready to start by March 2021. Medical colleges have had 1,400 seats added. A tele-radiology network is serving those in remote and inaccessible areas. Universal healthcare is now a right, not a wish. Over 350,000 homes have been electrified, benefiting more than 1.5 million people—only those who have suffered the bitter cold of Kashmir can truly appreciate the warmth that electricity brings

One year is insufficient as evidence of any radical overhaul, but the statistics of the first year of performance under the direct dispensation of a Union Government headed by Prime Minister Narendra Modi offer evidence of an unprecedented positive economic narrative.

All facts are not equal, and scales of measurement vary. But it is undeniable that while all social spending ameliorates the present, what protects the future is a tilt towards the young. For the first time, the right of a child to free and compulsory education has been extended to Jammu and Kashmir. Fifty new colleges with 25,000 additional seats have come up in the past year. A joint venture between Tata Technologies and the government is in the process of setting up two centres of innovation and skill development. Five nursing colleges, seven medical schools and two new AIIMS hospitals are being built.

A 10 per cent reservation in jobs has been given to economically weaker sections, with other quotas for OBC segments, Pahari-speaking citizens and residents who live in danger along the Line of Control and the International Border. Senior citizens are now entitled to maintenance and welfare.

The most impressive gains have been in health and power. An outlay of Rs 7,500 crore, with Rs 881 crore for upgradation, has already seen 60 projects completed, and another 80 ready to start by March 2021. Fourteen hundred seats have been added to medical colleges. A tele-radiology network is serving those in remote and inaccessible areas. Universal healthcare is now a right, not a wish. Over 350,000 homes have been electrified, benefiting more than 1.5 million people—only those who have suffered the bitter cold of Kashmir can truly appreciate the warmth that electricity brings.

Till June 2018, only seven ongoing projects had been completed, utilising only 27 per cent of allotted funds. In the past year, the figures have risen to 17 more, and 54 per cent of funds have been used. Bottlenecks in road constructions are being cleared and highways speeded up. All contracts have now been awarded for the 624 MW Kivu, 1,000 MW Pakal Dul and 850 MW Ratle hydroelectric plants. The mission is to take water to every home and every field. Work has begun on the Shahpur Kandi multipurpose project, which had been pending for seven decades.

Experience has made us cynical. Opponents laugh at statistics, and the neutral yawn. The proof of this pudding is going to be in the eating (the older a cliché the more likely is it to be true; or it would not have survived).

But the good thing about development is that it is demonstrable. You can see it if it exists. There are either five new nursing colleges or there are not. It cannot be hidden. It is not notional. Any observer, or journalist, can count to five easily.

Democracy is a shrill business. You can be reasonably sure that if these institutions were non-existent, television cameras would have been transfixed upon the blank space. Opposition leaders who use social media would have turned the Twitter bird into a hawk.

Development is the only answer to emotive politics, even if it may not always work as a complete antidote. Prime Minister Modi has made development his central mantra with an important codicil: development for all, and for the poor most of all. After experiments and hiccups, Jammu and Kashmir has entered the full range of this mantra.

Aurangzeb: The Emperor of Counter-Reformation

The Mind of the Permanent Winner