The Clasp of Civilisations 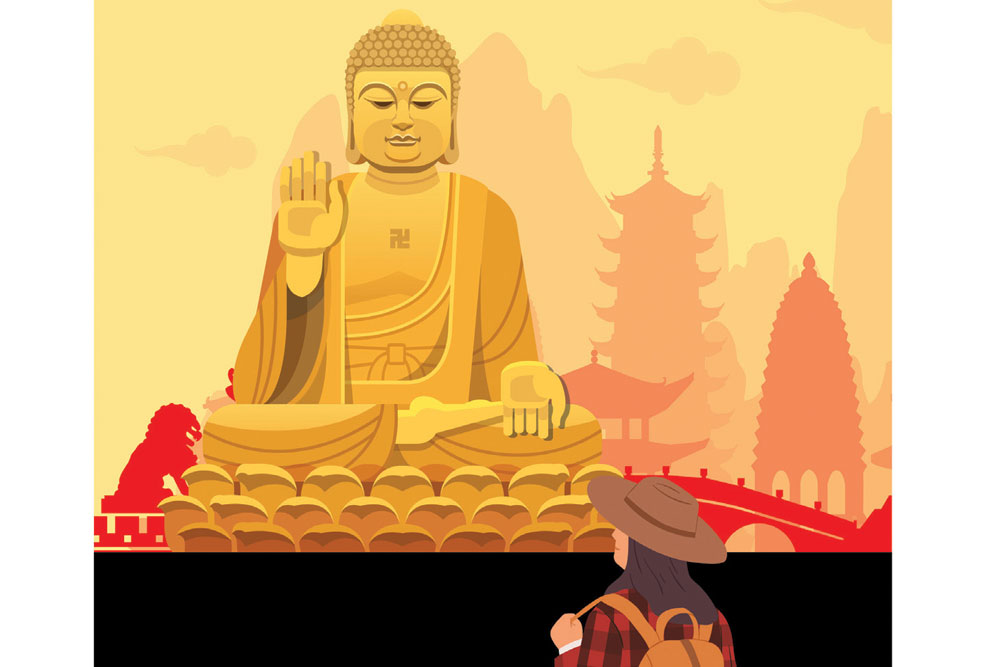 
To a wise man, the whole earth is open
—Democritus

TO BE TERRITORIALLY polygamous, as I have been, is to have inculcated a sense of capaciousness that expands the metaphorical contours of ‘home’. The more I have travelled, the more I have discovered how political borders obscure fundamental truths. For as much as we try and match national narratives to the tidy geometry of maps, our histories have in fact been messy, cross-pollinated and multiple.

The result is the constant shock of recognition. There is always something of what you consider to be your own, in even the most ‘foreign’ of lands. China, for example—a country I lived in for almost a decade—was no longer inscrutable once I’d discovered that strangers addressed each other as family: auntie, grandmother, older brother. Rural folk shared their boiled eggs and oranges with me on cross-country bus journeys, reminiscent of similar trips in India. In the unlikeliest of places—outside the Great Mosque in Xi’an, or in a taxi in the far northeastern city of Harbin— people sang old Hindi movie songs like ‘Awaran Hoon’.

On a visit to the most hallowed of Chinese landscapes— the misty Song mountains in Luoyang, home to the fabled Shaolin monastery—the large bronze statue at the entrance to the temple looked strangely familiar, almost Indian. The reason, I learned, was that it was in fact a likeness of Bodhidharma (Damo in Chinese), an Indian monk who had founded the Chan or Zen school of Buddhism in 517 CE and is credited with having developed the style of kung-fu that Shaolin is renowned for.

In Indonesia, references to the Hindu epics of the Ramayana and Mahabharata are embedded in the language, on street hoardings and political commentary. When I lived in Jakarta (between 2012 and 2016), my local mechanic was called Rama Repairs and my neighbourhood shopping mall was Dharmawangsa Square. I came across a nationwide charitable foundation for twins called the Nakula and Sadewa society, and a support group for Indonesian women in mixed marriages named Srikandi (Shikhandi).

Buses were painted with large advertisements for an energy drink called Kuku Bima, which promised the imbiber Bhima-like endurance. One of the most congested arteries in the city centre, Gatot Subroto, was named after a much-feted army general. An appropriate name, as Gatot is a diminutive for Ghatotkacha, Bhima’s fearsome, half-demon, warrior son.

I also recognised the eclecticism of street traffic in Jakarta, where fancy SUVs shared space with motorbike taxis, which in turn jostled against brightly painted three-wheeler scooters locally referred to as Bajai. It transpired that Indonesia had been importing two-stroke autorickshaws from India for decades. The term “Bajai” derives from their Indian brand name, Bajaj.

Of all the countries I’ve lived in, Japan with its aural hush, preternatural punctuality and obsessive cleanliness is arguably the closest to an Indian ‘other’. And yet when I moved there in 2016, there was a visceral familiarity to the way people folded their hands into a ‘Namaste’ at temples, and indeed in the idolatry on display in the temples themselves.


Many Japanese schools of Buddhism, especially those influenced by tantric thought, adopted Brahmanic and Hindu devas (ten). Some of these were co-opted in their extant forms while others became associated with certain Bodhisattvas

Early Buddhism was deeply intertwined with Hinduism. Consequently, many Japanese schools of Buddhism, especially those influenced by tantric thought, adopted Brahmanic and Hindu devas (ten). Some of these were co-opted in their extant forms while others became associated with certain bodhisattvas. The Hindu God Shiva (Daijizaiten), for example, was associated with Avalokitesvara or Kannon, while Brahma (Bonten) was linked to Manjusri.

Hindu deities were commonly incorporated as guardian spirits. Some, like Indra (Taishakuten) and Varuna (Raijin) are ubiquitous at the entrances to Japanese temples. Saraswati (Benzaiten) is particularly popular and has hundreds of temples dedicated to her across the country. The physical form of these devas has been rendered unrecognisable by their journey beyond the Himalayas and across the Sea of Japan. Yet, the edifice of belief and ritual surrounding them remains a palpable connect with India.

All the examples I’ve given so far are from Asia, a region that over the centuries has been bound in a civilisational embrace underpinned by pilgrims, traders, and soldiers. But even in faraway Spain, the country I now call home, there is much that instantly feels mine.

Both Spaniards and Indians are unguarded physically, unselfconsciously loud, and terminally social. And beyond personality traits, we share an Islamic heritage, so that many of the jewels of our ‘national’ patrimony are architectural siblings. The echoes of the geometric effervescence of the Alhambra in Spain’s Granada are loud in any of the great forts and palaces of the Indian Mughals.

Then there is the language. ‘Ojala’, which means ‘hopefully’ in Spanish, has its root in ‘insh’allah’. So that every time a Spaniard says something akin to, “Hopefully, we’ll meet soon,” they are etymologically invoking the grace of God (Allah).

Modern Spanish has thousands of words with Arab roots, linking it in a string of lexical pearls to Hindi/Hindustani, given the latter’s debt to Persian-mediated Arabic. Consider the words for sugar: azúcar in Spanish derives from the Mozarabic (Arabic influenced Spanish that developed between the 7th and 15th centuries) assúkar, in turn from the classical Arabic sukkar. In Hindustani it is shakkar.

Or the words for chess: Ajedrez in Spanish comes from the Mozarabic aššaṭran, which has its root in the classical Arabic, šiṭranǧ. In Hindustani it is shatranj.

There is more. The most iconic demographic of the country—the gitanos or gypsies—identify strongly with India, the land that they trace their origins to. I realised this upon finding myself in a cinch with a gypsy flamenco singer in a smoky tavern in Madrid. I’d been only one amongst the musician’s many adoring fans until he learned that I was Indian. “I am from India too,” he’d said, tapping his chest with an open palm before gathering me up for a hug.

Gitanos, of which there are upwards of 750,000 in Spain, do not have a well-documented history. But they are believed to have entered the region during the 15th century. Linguistic analysis of Romani (gypsy) dialects shows that they originated in northwestern India and migrated westwards in waves, between 300 BCE and 600 CE.

The language of Spanish gypsies is called caló and some Spanish sources refer to the people as calé referring to their darker skin, since in caló, calé means black. The ‘c’ is hard, so the word is pronounced kale. Sound familiar?

One of the most delicious stories of Indo- Spanish linguistic connect, courtesy the gitanos, has to do with the spicy sausage so emblematic of Spain: the chorizo. The word in Spanish not only refers to the cold cut but is also slang for a thief, deriving from the caló term chori for thief. Which explains how India’s chors became chorizos in Spain.

What this whirl around the world demonstrates is that culture isn’t static. It is like shot silk, changing colours in different light. It can slip through cracks, heedless of walls and borders. Us and them is a deceptive dichotomy, something that travellers have been aware of for long. The philosopher Democritus of Abdera had it right all the way back in 420 BCE when he said, “To a wise man, the whole earth is open; for the native land of a good soul is the whole earth.”