The Arrow of Love

A secret for the Vedic minds 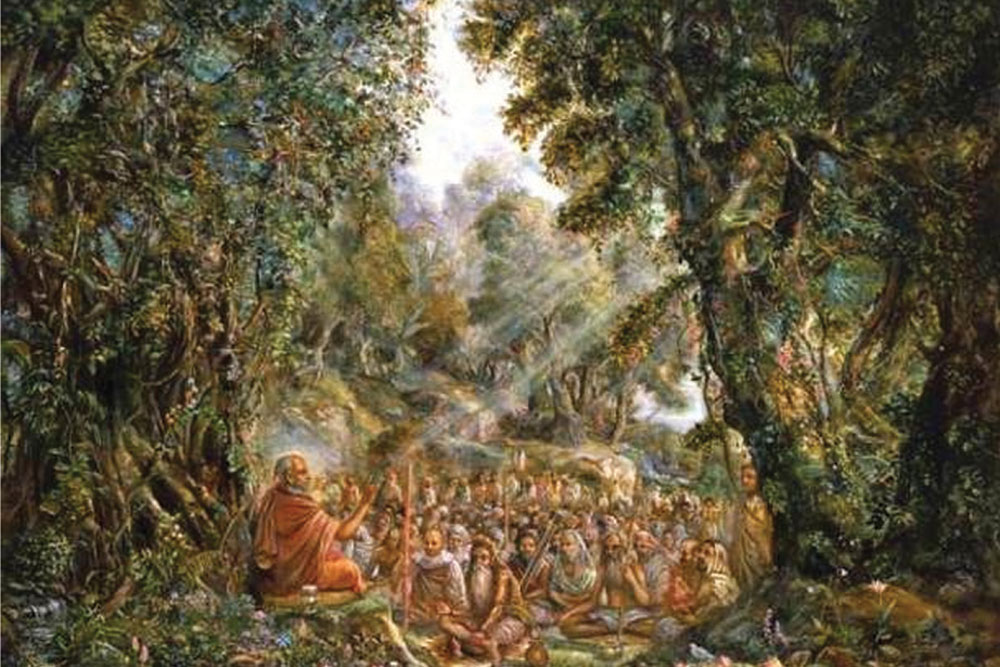 Suta replied, ‘O Shaunaka! Listen. I will tell you about a great secret, since you know the Vedas and are foremost among Shiva’s devotees. In the region near the ocean, there was a village known as Bashkala. The people who lived there were wicked. They deceived and did not follow the dharma of the Vedas. They were evil and dwelt in an evil region. They were insolent, did not follow devas and used deception for subsistence. Though they practised agriculture, they used force and wielded weapons. They indulged in fraud and were greatly addicted to intercourse with women. They did not possess jñana or non-attachment. They did not know about true dharma and about ensuring the welfare of others. They were firm in their addiction to hearing about wicked accounts. Their intelligence was like that of animals. The minds of those deceivers were such that they turned away from their own dharmas and followed that of other varnas. They always indulged in wicked deeds and were constantly interested in material objects. All the women were wicked svairinis, addicted to sin. (A svairini is a loose and wanton woman. There were different types though. Svairinis are loose women who have sex with anyone they want, but only with those from the same varna. Kaminis are loose women who have sex with anyone they want, irrespective of varna. Pumshchalis have no sense of discrimination and are almost like harlots.) They were wicked in intelligence, practicing vyabhichara (sexual transgressions). They were devoid of all good conduct. Such wicked people lived in the village known as Bashkala.’

‘There was a Brahmana named Binduga there and he was a great wretch. He was extremely evil in his atman and a great sinner. He always followed wicked paths. He had a wife named Chanchula. But his mind was so overcome by desire that he became the husband of a courtesan. Though his own wife always followed dharma, he abandoned her. Suffering from the arrows of love, the evil one amused himself with the courtesan. In this way, a long period of time elapsed and he continued to indulge in his wicked acts. However, Chanchula still suffered on account of love. Scared of giving up her own dharma of devotion towards her husband, she bore that hardship. However, her beauty faded and she was no longer in the bloom of youth. She was overwhelmed by desire and gave up her own dharma. In secret and in the night, when her husband could not see, she started to have intercourse with her paramour. She deceived him. Deviating from virtue, she followed a wicked path. On one occasion, he saw his wife, Chanchula, engage in this. In the night, he saw her, overwhelmed by desire, having intercourse with her lover. Witnessing his wife’s wickedness, his mind turned towards an evil course of action. While his wife was engaged in intercourse with her paramour at night, he angrily rushed towards them. The deceitful and evil paramour saw that Binduga had returned home. The deceiver swiftly fled from that house. At this, Binduga caught hold of his wife. He repeatedly abused her and struck her with his fists. The woman was beaten by her husband. The deceitful svairini, Chanchula, became angry. She spoke to her deceitful husband, Binduga. Chanchula said, ‘Full of evil intelligence, every day, you succumb to desire and pleasure yourself with a courtesan. You abandon your own youthful wife, who is devoted to serving her husband. I am beautiful. I am young. My mind is also overwhelmed by desire. Please tell me. When I am deprived of pleasuring myself with my husband, what course of action do I have? I am extremely beautiful. I am young. I am agitated. How will I withstand the pangs of desire? Deprived of your companionship, my mind is suffering.’ The deceitful sinner, Binduga, who had turned away from his own dharma, replied to her, ‘What you have said is indeed true. Your mind is agitated by desire. O beloved! I will tell you what is beneficial for you. Listen. Give up this fear. Without any fear in your mind, dally with a new paramour every day. Give them their pleasure and take from them whatever riches you can. Hand over all that wealth to me. My mind is attached to that courtesan. This will indeed bring great benefit to us, to you, as well as to me.’ Chanchula heard her husband’s words. Evil in her intelligence, she accepted her husband’s words. With wicked minds, the couple entered into this agreement. Without any fear, they indulged in this wicked course of action. A long period of time elapsed. They followed this futile pursuit.’


Chanchula said, ‘O destiny! You have bestowed this great sin and great hardship on me. You have deceived me. My own dharma would have given me every kind of happiness. But I was made to deviate from it’

‘In the course of time, Binduga, the evil-minded Brahmana died. The deceiver went to hell. He went through many kinds of hardship in hell. He then became a terrible pishacha in the Vindhya mountains. When her husband, Binduga, died, she continued to reside in her own house, indulging in wicked conduct. She spent a long period of time with her sons. Chanchula continued to amuse herself with her paramours. Overwhelmed by desire, she found her pleasures. After some time, her youth passed. On one occasion, through the urging of destiny, an auspicious occasion arrived. Along with her relatives, the woman went to the kshetra of Gokarna. Along with her relatives, she generally roamed around, here and there. In that connection, she went to that tirtha and bathed there. In a temple, there was a daivajna (an astrologer), who was speaking about Shambhu’s sacred account from the Puranas. From his mouth, she heard a bit of this auspicious account. Women who are attached to paramours go to hell. There, Yama’s servants insert hot iron rods inside their vaginas. The person expounding from the Puranas spoke about this, to develop non-attachment among those who heard. Hearing this, she became anxious and trembled. When the narration was over and the people had left, the scared woman approached the Brahmana in private. She addressed the one who had spoken about Shiva. Chanchula said, ‘O Brahmana! Listen. Without knowing my own dharma, I indulged in wicked conduct. On hearing about this, please show me your unlimited compassion and save me. I have committed an extremely grave sin. Blinded by desire, I spent my entire youth in fickle behavior. Hearing your words about the development of non-attachment, a great fear has been generated in me, combined with trembling. Shame on my foolish intelligence. Shame on the sin I have committed, being overwhelmed by desire. I have turned away from my own dharma and have committed the reprehensible act of being addicted to material objects. In pursuit of a little bit of happiness, I have destroyed my own tasks. I have committed a grave and terrible sin and have unwittingly cause hardship. What calamities am I headed towards? Alas! What terrible miseries will this lead to? Who can tell? My mind has turned towards excessively wicked paths. When the time for death arrives, I will see Yama’s fearful messengers. When they strike me and bind nooses around my neck, how will I maintain my patience? In hell, when my body is sliced into fragments, how will I tolerate it? The great pains there lead to special miseries. During the day, I will not be able to move my organs of sense. How will I not be able to grieve? In the night, how will I be able to obtain the desired sleep? I will be overwhelmed with grief. Alas! I have been burnt down. My heart is being shattered. I have destroyed myself in every possible way. I have been a sinner in every possible way. O destiny! You have bestowed this great sin and great hardship on me. You have deceived me. My own dharma would have given me every kind of happiness. But I was made to deviate from it. O Brahmana! There are miseries when an embodied being is impaled on a stake or is flung down from the top of a mountain. But this misery is one crore times that. A sin like mine is great. Generally, it cannot be purified by performing one hundred horse sacrifices or bathing in Ganga for one hundred years. What will I do? Where will I go? Who will I seek refuge with? Who in this world will save me? I am descending into an ocean that is hell. O Brahmana! You are my guru. You are my mother. You are my father. Save me. Please save one who is distressed. I seek refuge with you.’ With non-attachment generated in her, she fell down at his feet. Full of compassion, the intelligent Brahmana raised her up and spoke to her.’
The story will continue in the next column.