The geopolitical implications of demographic changes in the US 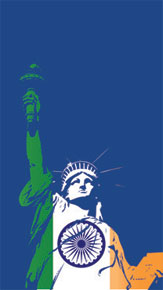 THE MAYFLOWER PILGRIMS, a group of 74 men and 28 women, set sail from Southampton to escape religious persecution in their native England. They landed in Cape Cod, North America, in November 1620. At the time, the continent had a population of over seven million indigenous Indians.
The English pilgrims were among the first Europeans to set up a permanent colony in Plymouth in today’s Massachusetts. The foundation of white America was laid. Over the next four centuries—1620 to 2020—the population of indigenous Indians in North America dwindled from seven million to a little more than four million today.

The population of Europeans in the continent, meanwhile, rose rapidly. In 1900, 89 per cent of the US’ 76 million people were white. The rest were African-Americans—shipped to North America as slaves by European slave traders since the 1600s—and indigenous Indians who suffered periodic massacres at the hands of European colonist-settlers. Dubbed Red Indians, they were confined to reservations.

The US published its first census in 1790. On August 12th, 2021, the US Census Bureau published the much-awaited 2020 census, delayed by the Covid-19 pandemic. The results have sparked a furious debate across America.

For the first time in over 300 years when the European colonist-settler population in North America overtook the population of indigenous Indians and African-American slaves, whites are today close to slipping below 50 per cent of the country’s population of 332 million.

Forecasters believe that the US will become a non-white majority country by as early as 2035. The geopolitical implications of these rapid demographic changes in the world’s most powerful country could be far-reaching.

The balance of power is shifting from the Atlantic to the Pacific Ocean. China’s rise has been toxic for its neighbours and the wider world but India must prepare for a fundamentally altered world order over the next decade.

Former British Prime Minister Tony Blair has already sounded a warning, using America’s shambolic retreat from Afghanistan as a symbol of fraying Western power. Blair wrote on the website of the Tony Blair Institute for Global Change on August 21st: “Look no further than Pakistan’s prime minister (Imran Khan) congratulating the Taliban on their ‘victory’. Although many of those espousing Islamism are opposed to violence, they share ideological characteristics with many of those who use it. Islamism is an ideology utterly inconsistent with modern societies based on tolerance and secular government. Yet Western policymakers can’t even agree to call it ‘Radical Islam’. We prefer to identify it as a set of disconnected challenges, each to be dealt with separately. And for Britain, out of Europe and suffering the end of the Afghanistan mission by our greatest ally, the United States, with little or no consultation, we have serious reflection to do. We are at risk of relegation to the second division of global powers.”


The swift ethnic changes taking place in the US could meanwhile work in India’s favour. In the 2030s, the world’s three largest economies will be the US, China and India. As the 400-year-old geopolitical and cultural link between Europe and America loosens, the US will increasingly look to India to counterbalance China’s push for global supremacy

The retreat of the US-led West from Afghanistan will compel India to finally punch at its geopolitical weight and be more assertive in projecting its military and economic influence across the region.

The Taliban takeover of Afghanistan will lend a sense of urgency to the debate on the danger radical Islam poses.

India has been among the world’s worst victims of Islamist terrorism from Pakistan-based terror groups. Pakistan has escaped global censure because of its geography and its useful but duplicitous role in fighting terror groups while funding them under a veil. That veil has been lifted by the Taliban in Afghanistan.

The swift ethnic changes taking place in the US could meanwhile work in India’s favour. In the 2030s, the world’s three largest economies will be the US, China and India. As the 400-year-old geopolitical and cultural link between Europe and America loosens, the US will increasingly look to India to counterbalance China’s push for global supremacy by 2049. That year will mark the centenary of the founding of the People’s Republic of China.

India, which will celebrate the centenary of its Independence two years earlier, will play a pivotal role in determining, along with a multiracial US, the balance of global power in the unfolding 21st century.