On why the quest for the ideal man ended with Him 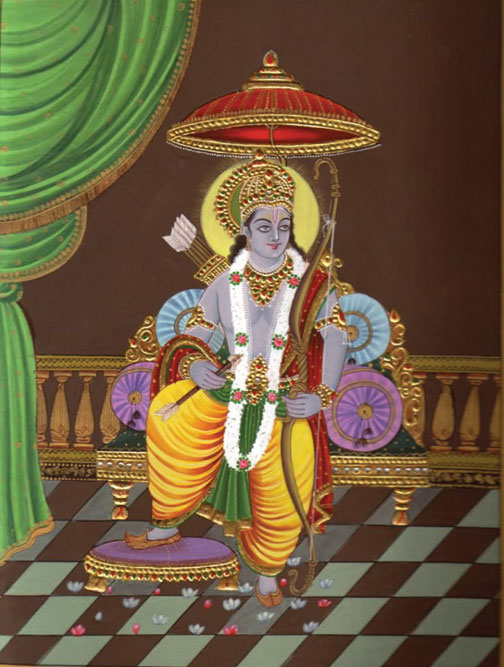 Political, economic and social factors have changed the shape of nations.
Worldwide, the effect has been more than the obvious one of geography.
A scarce century ago, it was possible to travel without the various
governmental sanctions of a visa, that since have allowed you into, or forbidden you from, a particular country.

The ancient texts of India describe India as ‘Bharatha Varshe Jambu
Dweepay’. A land which extends from Gokarna (the area of what is
largely known as Kerala then still submerged in the sea, before
Parashurama raised it up) to the boundaries of Iran. Many events,
collectively labelled history, have changed the political boundaries of India. Nations have been born out of landmasses that were merged and split again based on the policies followed by those who ruled the populace of a defined area. Let us take a look at the most recent major event here and use the lens of ancient tradition to study the significance.

On August 15th, 1947, India and Pakistan were carved out of a single contiguous landmass. The division took place on the basis of religion. It is a perennial speculation as to why Muhammad Ali Jinnah could not get to be the leader of an undivided India, and instead turned his energies towards the realisation of Pakistan. Both the new nations were set back decades by the vivisection caused by the absence of a unifying personality in the top echelons of leadership. A Pakistan headed by Jinnah for a decade may have carried over the inclusive Islam practised by the Indian Muslims. Or he may have continued with his adamant division of a people on the tenuous grounds of faith. A leader with more sensitivity to traditional sensibilities than the first Prime Minister of India would have succeeded in soothing the nascent fears caused by the 1947 Partition of the largely silent majority of Hindus, instead of allowing them to fester. These wounds were for long ignored and kept out of sight of official policy, and hence, never got reduced, leave alone extinguished.

Ramarajya, which is spoken about a lot these days, had to have Rama,
necessarily as its ruler. It is not primogeniture, as Dasharatha’s eldest
male child, which puts him there as the ideal. Rather, it is his famed concern and consideration for his subjects which make him the perfect king. ‘Praja Kshema Thalparan’ literally means a king who is interested in the welfare of his people.

‘Praja Kshemaika Nirathan’ means a king whose only interest is the welfare
of his people! Worldwide, there is a crying need for leaders of this
kind. It was to find out the truth about what his people think of him, which
made Rama move about among his people in disguise. Presumably, Rama’s years in the palace before his Kaikeyi-wrought Vanavaas would have taught him a thing or two about the very real danger of flattery around a point of power. A pleasing coterie has become part of every centre of power, be it economic, political or social in nature, one which a ruler must beware of. It is such a coterie in various forms and groups which seeks to ensure that the truth of actual conditions and needs never reaches the top people. Quite to the contrary, they seek to ensure that it is only their self-seeking version of what passes for common opinion which reaches the leaders. Being insulated from ordinary people, those at the top are led to believe that the facts they are force-fed is reality. Hence, the need to follow the example of Lord Rama and know first-hand what the actual condition of the people are, and to go beyond the usual circle of power in their search for the facts.

There is an interesting incident in Ramayana when the never failing Hanuman comes to find out the true state of affairs in Ayodhya after Rama’s victory over Ravana. Rama’s stepbrother Bharatha and the ruler apparent of Ayodhya had come to see Rama where he had banished himself to the forest as per his father Dasharatha’s promise to Bharatha’s mother Kaikeyi. She had extracted a promise from Dasharatha to crown Bharatha as his heir apparent. Kaikeyi, herself being the daughter of a king, was savvy enough in politics to realise that a Rama who continued to stay in Ayodhya would always be a potential threat to her son, Bharatha. Hence, her second demand that Dasharatha banish Rama into the forest for fourteen years.
Fate, however, had other ideas. Dasharatha died soon after Rama left his
kingdom with his wife and faithful sibling, Lakshmana. Bharatha was distraught at the death of his father and horrified by his own mother’s political ambitions for him. Along with the news of Dasharatha’s death, Bharatha took Kaikeyi with him to free Rama from the vow he had taken to uphold his father’s promise to Kaikeyi. However, Rama argued that he was carrying out Dasharatha’s dharma and that his father’s death did not free Rama from his promise. Rama would return to Ayodhya only after the
stipulated fourteen years.

A thoroughly dejected Bharatha was forced to carry away Rama’s paaduka, or footwear. Bharatha vowed never to sit on the throne of Ayodhya. He would rule Ayodhya in the name of Rama and be, in effect, his regent. At the end of fourteen years of Vanavaas, Rama was ready to return to Ayodhya. However, he was wise enough to know that people could change over a passage of nearly one-and-a-half decades. If Bharatha was ensconced comfortably on the Ayodhya throne, Rama had to work out an alternate plan. Sincere invitations were there for him, both from Vibheeshana, brother of the slain Ravana, as well as the Vanara king Sugreeva.

Hanuman found an astounding sight in Nandigram where Bharatha was ruling the land in Rama’s name. He had installed Rama’s footwear on the throne and sat on the floor by it to rule as a mere caretaker to his brother’s kingdom. Bharatha was living pretty much as a sanyasi, or renunciate, as Rama had been in the forest.

Hanuman found Bharatha piling up firewood for a pyre. Fully in his favourite disguise as a Brahmin, Hanuman questioned Bharatha who the pyre was for. Bharatha, who had kept a diligent count of the passing days, informed Hanuman that fourteen years had passed since Rama left Ayodhya. He had promised to be back after his sojourn in the jungle. Bharatha was going to immolate himself in the pyre if Rama did not return that day. It would have meant that Rama was no longer alive to keep his word. Such was the faith that Bharatha had in his elder brother.

Hanuman assured a now delighted Bharatha that Rama was on his way back to Ayodhya. At any point in the long fourteen years, Bharatha could have found it understandably convenient to sit on the throne and be ready to vacate it at the advent of Rama. He could have led a normal life, if not the opulent one of the palace. Bharatha comes across as one of the finest characters in the entire Ramayana, thanks to his unwavering adherence to Dharma. Amazing that from August 15th, 1947 itself, such a wonderful history (and much more of the same) was not allowed into the curriculum of schools, so that the young understand the societal lessons embedded within the ancient history and traditions of India

It is only when Rama was fully and reliably convinced of Bharatha’s
disinterest in being the king of Ayodhya, that he cared to return and claim
his inheritance. Among the entire pantheon of Hindu divinities, it is Rama
who is the epitome of justice. Even though an incarnation of Shri Maha Vishnu, Rama is called Maryaada Purushoththam, or the Perfect Man. With his adherence to the letter and spirit of taking cognisance of his subject’s opinions to the extent of banishing his wife, whose purity had been ratified in public by a test by fire, Rama’s act would be a hard—if not impossible—one for later generations to follow.