Both Ram and Krishna have Maha Vishnu as their fundamental source. Yet their manifestations are completely different 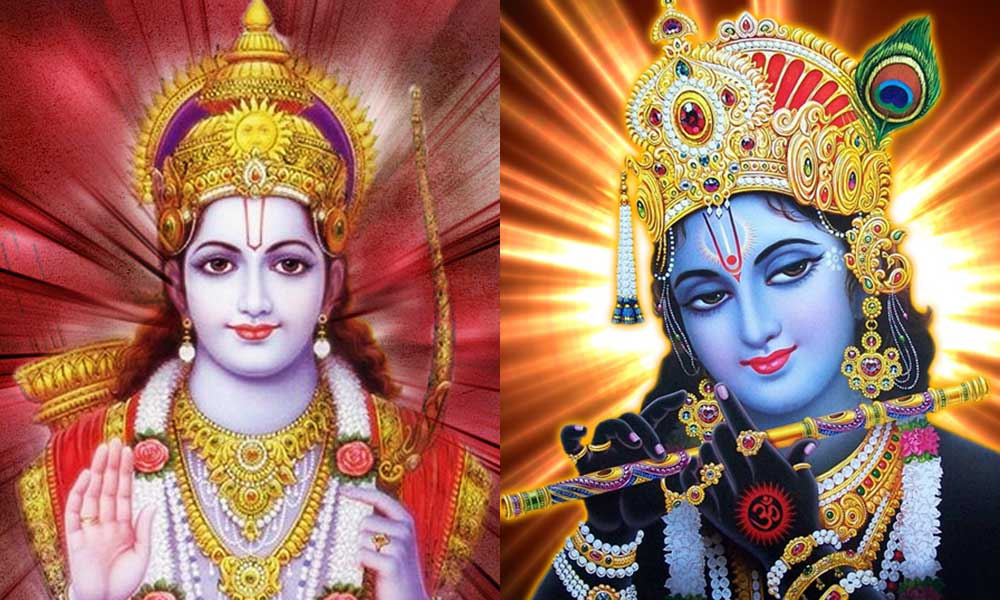 There are two very distinct gender divisions acknowledged throughout the world, the female and the male. The third one is a varying combination of both these. The most recent of the two incarnations of Maha Vishnu embody the male and the female facets of divinity. Ram, the eighth avatar is completely masculine in his aspect. He is very much the ideal son who takes care of the reputation of his father’s clan. He lives to bring great honour to his surname. Dashrath, Ram’s father is a has-been hero at the beginning of Ramayan, the story of Ram.

Dashrath had the ability to drive his chariot in ten different directions at a time. The mind boggles at the impossible physicality of this feat. The chariot stands for the mind and Dashrath was basically multi-tasking very effectively. Dashrath’s prowess in battle was legendary. Yet it is Kaikeyi, his second (and favourite) wife who saves his life in a skirmish. Grateful, Dashrath promises Kaikeyi two boons which could be given to her, at her wish. This results in total personal tragedy for Dashrath. More than anointing Kaikeyi’s son Bharath as his heir apparent, it is Ram’s leaving Ayodhya which destroys his ageing father. The subtext that power, however deserved, given to a woman results in disaster is subtly stressed.

Sita, the incarnation of Maha Vishnu’s Shakthi Lakshmi is found on the furrows of earth of King Janak, her foster father. Rather like Lakshmi, rising out of the ocean, during the churning carried out by both devas and asuras, here, as Sita, Lakshmi comes from and ultimately disappears into the depths of the earth. Lakshmi stands for prosperity. When the devas who have her, in their midst, forget that the asuras too were partially responsible for retrieving her, Lakshmi goes back into hibernation in the ground.

Ram’s attack on Lanka primarily is to rescue his wife who has been kidnapped by Ravan, the ten-headed ruler of
Sri Lanka! When Hanuman, the monkey messenger of Ram, jumped across the ocean and succeeded in seeing Sita face to face, He invited Sita to sit on his back and be taken away from Ravana’s Lanka. Sita insisted that it was Ram who had to cross the ocean and liberate her. Sita’s anguish at being a captive of Ravan’s Ashoka Vana is less important than Ram having to come over and claim Her. Sita is very much revered as Ram’s wife, rather than as a person in her own right. Ram calling for an agni-pariksha or test by fire is more to convince his companions rather than an inherent suspicion in his own mind about Sita’s fidelity to him. Again, Sita is subservient to Ram.

In fact, Ram is so human that he wonders why Garuda, the divine vehicle of Maha Vishnu (it is reputed that by merely flapping his wings, Garuda makes pregnant female snakes instantly abort) comes to cut free him and his sibling Lakshmana from Ravana’s son Inderjit’s naaga-paasha (snake rope) arrows!

Krishna, considered to be the complete incarnation of Maha Vishnu is delightfully different. In the Devi Bhagavatham, we see the whole of creation entreating Radha, Krishna’s beloved to allow the avatar to happen. Krishna’s mother Devaki is being driven personally by her brother Kamsa when the prophecy of his assassin/nephew is foretold. Kamsa’s love for Devaki ensures that she is alive to give birth to Krishna. Mother Mary had to go through the agony of witnessing her son’s death, whiles she was alive. To be the Mother of Maha Vishnu, Devaki had to witness her own brother bash her seven sons to death, before the advent of Krishna.

Miraculously Vasudeva, Krishna’s biological father is able to exchange his son Krishna, with the newly born daughter of Yashoda. This girl child is, in fact Yog Maya or the Mother Goddess out to protect the infant Maha Vishnu. Kamsa, by inadvertently touching her feet, though it was in an attempt to dash her head to pieces, ensures his ultimate salvation by being killed by an incarnation of Maha Vishnu.

Yashoda’s love for Krishna is a universe, all by itself, as is the deliciously contraband affairs that the Gopis of Vrindavan have with their darling butter thief! To each person, Krishna is theirs with an intimacy that is creative, free and full of deep emotions. The strict rules of Ramarajya are not to be found. As a monarch, a certain remoteness in Ram is inevitable.

It is for his aunt Kunti’s sake and later on for her daughter-in-law Draupadi’s sake that Krishna is at hand to help his cousins, the Pandavas, none of whom are Pandu’s children. The Bhagavad-Geeta, or the Song of God embodies one of the many aspects of Hindu philosophy. This is a pep talk that Krishna gives his cousin Arjuna loath to fight his childhood associates, whether they be his adored teacher, beloved grandfather or cousins.

Both Ram and Krishna have Maha Vishnu as their fundamental source. Yet their manifestations are completely different. The devotee is free to choose that form which reverberates in her/his psyche. This, then, is the beauty of this ancient way of life where differences are celebrated, rather than destroyed as something that is unfamiliar and therefore, alien.