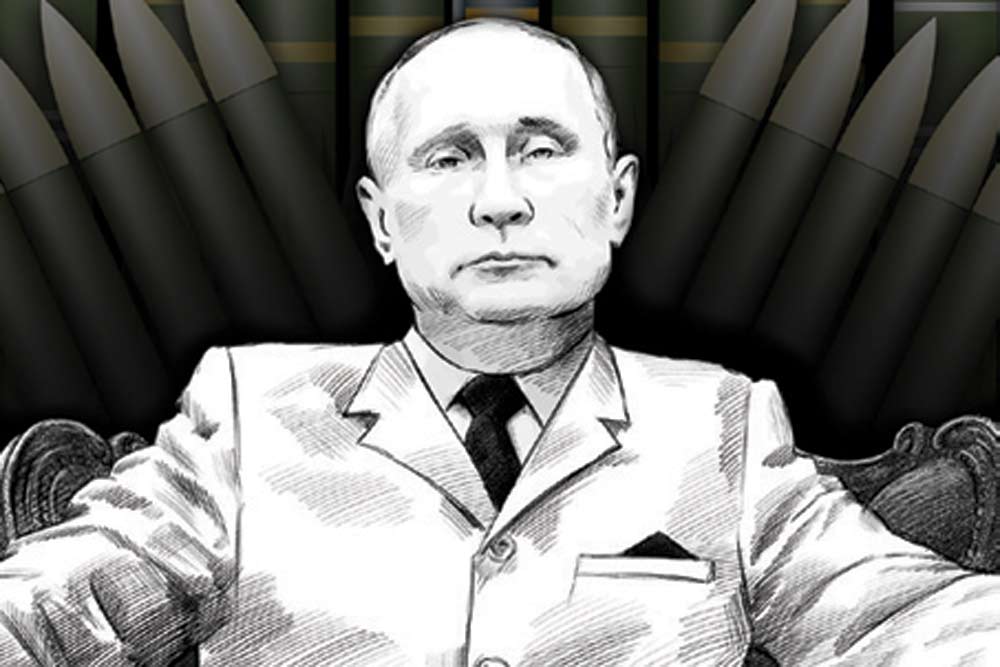 
IDEOLOGY TRUMPS MORALITY. Or a war can bring back the uses of the enemy to the conversation. It is as if the international mobilisation against Putin’s war on Ukraine must be challenged by the counter-moralists still haunted by the old ghosts of ideology and by those who find common cause with the imperial motivations and the “de-Nazification” project of the Russian autocrat. In the rhetorical theatre of war, global sentimentalism over the human cost of Russia’s invasion is an apology for isolating a country whose transition from an empire to a nation doesn’t follow the West’s playbook of democracy. Seen through the dissenter’s prism, the aggressor, a convenient stereotype, is a victim of liberal democracy’s post-Cold War triumphalism, and his sense of hurt and his nation’s transborder fears remain incomprehensible to his accusers.

For the ideological harrumpher, the remains of the Soviet empire are a site of lingering injustice: In the great power struggle of the 20th century, the winner epitomised imperial arrogance. The anti-Americanism of the Left, new or old, was matched in its intensity by the persuasive power of their inner Soviet Union. The socialist ideals on which it was built were too strong to be made redundant by the terror reign of their unelected custodians. What they missed after the disintegration of the empire was an ideological homeland where the sense of social fairness outweighed the excesses of the apparatus. The anti-imperialists desperately needed action heroes, underdogs who fought alone.

The heroes were not all Castros. They were not all picture-perfect revolutionaries living up to Che’s romance. They were all Chávez and other variations of victimhood. They held aloft the flag of anti-Americanism even while they built the biggest prisons for those who dared to ask questions. Their suppression of democratic impulses was a necessary action to preserve the spirit of resistance against the American Evil. The Left’s portrait of ideological despotism as an anti-imperial system found its most fulfilling—and appalling for those who have not lost faith in the possibilities of humanity—moment when Saddam Hussein, from his Baathist bunkers, resisted American missiles. What the dissident Iraqi writer Kanan Makiya called the Republic of Fear became the battlefield of imperial overreach, and Saddam a neo-Nebuchadnezzar of anti-American valour. The Saddamisation of the mind was as useful as the Stalinisation of the mind.

Along came Putin, the besieged nationalist pitted against the West with its anti-Russian alliances, the only safekeeper of a reawakening nation’s scarred pride. For anti-imperialism’s leftist legion, his daring is a necessary defiance, a rejoinder to the hollow idealism of the free world and its leader. Putin may not be missing communism, even though he is trained by it, but every action of the permanently aggrieved orphan of the Great Alternative speaks of a craving for the expansiveness of the nobler imperium. His Eurasian vision is a Soviet fantasy updated by nationalism, a paranoid expression of his faith in the mission history, not the version written by the winners, has entrusted him with. His war in Ukraine, the wayward Slavic sibling, is nothing more than a warning against the wages of Westernisation. Putinistas of the Left find in his War of the One anti-Americanism’s boldest defence—a war made inevitable by the insensitivity of those who claim to have won the clash
of ideologies.

The endorsement of Putin by the Left, relentless in its mythification of rogues as the last anti-Americans fighting for the cause, has got an unlikely companion. For the far right, Putin exudes nationalism’s muscular charisma. His rhetorical position that the war is essential for the de-Nazification of Ukraine is gaining acceptance among ultra-nationalists and haunted leftists. When he invokes the de-Nazification project, he is mythicising himself as the natural inheritor of the Great Russian who sacrificed the most to save the world from the Nazis. Putin’s war manual may be a replica of Hitler’s, but his war has brought together the ultra-right and the anti-imperial left as joint custodians of a revisionist morality in which the tragedy of Ukraine is an abstraction. Putin’s war crimes become a justifiable defence of an isolated nationalist with Soviet nostalgia.

The real hero of this war shows the power of the street, and talks, in the colloquial eloquence of a citizen-ruler of the social media age, while looking straight into global conscience. After the grand ideologies and their colossal apostles, the time has come for the little man, the unshaven president in a tee, to stand up for the big ideas of freedom. Fighting from the rubble of his country, he cannot afford arguments about good and evil, but only a plea for life. Those who are blinded by ideologies alone miss such heroism.