Death has an unfamiliarity to it which is scary 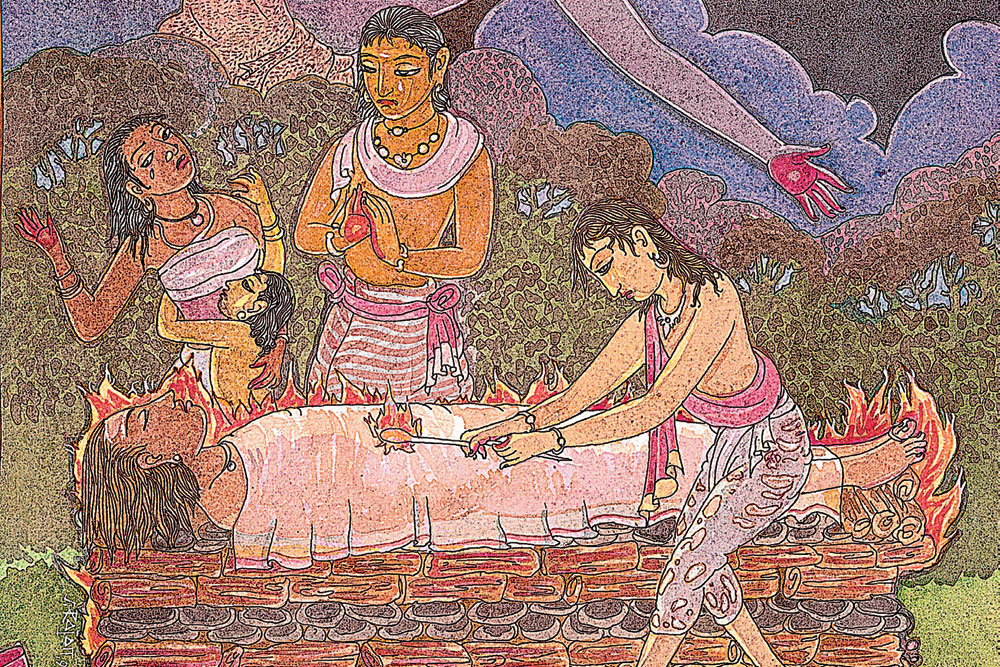 What made existence on Earth special was Love. It could be the love of money, fame, power, spiritual gains and, of course, the whole gamut of human love from that of a good mother to a child, a lover, a friend, a spouse, a devotee and all the variations therein. Take away the component of love and what is left would hardly be worth living! It would contain itself to a finite number of breaths, digested food, procreation and repose.

Birth and love top the list of human activity. But then, installed as firmly as the incidence of Birth at the far end of human life is that of the mysterious event called Death. Death was a definite given to human life. Animals are supposed to go through the entirety of life without consciousness. This factor is what differentiates human beings from their so-called lesser species.

Yet, any reference to death is immediately smothered with the insistence that it is a bad omen or ill-luck to do so. Euphemisms like passed away, laid to rest, reached the Lotus Feet of a cherished Deity, etcetera, are used. Most of the hymns and shlokas speak about boundless wealth and even great wisdom. But almost without exception the Venue for all this is Earth. There are rare hymns which talk of a heaven near God, unavailable even to the angels, after a long and successful stint on Earth. But these are not the norm.

Beyond a certain age, every human being is aware of an impending death at some point in the future. Yet the reluctance to talk about this subject is true of people of all religions. The two most common reactions to terminally-ill patients are either a fake enthusiasm that they will ‘definitely get well soon’ or a sepulchral seriousness which may be apt for a condolence visit, but certainly not to a person whose exit from this World seems more imminent than for others.

The Indian system of medicine talks about the human body being a combination of piththa (bile), kabha (phlegm) and vaatha (rheumatism). At the point of death, piththa being the most volatile of the three, leaves the body along with its awareness of the finer sensibilities. Vaatha makes the body rigid. Finally, kabha prevents oxygenation in lungs due to difficulty in breathing. Each individual body is said to have one strong and one weak point physically. It is the weak point that is often targeted for a disease to enter the body to terminate it.

Strangely, people are ready to mourn once a person dies a lonely death in the case of a possibly contagious illness. Yet, the very same people hesitate to give a sympathetic hearing to terminally-ill patients. It is almost as if they are guilty that they would still be alive when the other would no longer be there. Death has an unfamiliarity to it which is scary. We are so used to thinking of ‘ourselves’ as this moving, talking, feeding, love-making, sleeping body that the thought of being bodiless is disconcerting, to say the least. Yet, it is guaranteed that one day, all of us will be in that state.

It is said that at the point before death, there is a ‘replay’ of that life lived, just as the embryo while in the womb is supposed to recollect all its past births. Giving birth is certainly traumatic for the mother. Medical records show that there is equal stress for the child being born. It is almost as if the drastic change from the warm, self-contained world of the mother’s uterus to this comparatively harsh and cold world snuffs out all memories of those past births.
Disposal of the dead is an activity that is done by the living. Nature has designed us in such a way that what is left of us once life flees can be easily absorbed into it. Whether it is the meticulously conducted Shraadhdham for Hindus or All Souls’ Day, remembering the dead seems to be imperative for the living.

There was a horrendous terrorist attack in the Taj Mahal Hotel in Mumbai where many were killed. Yet, today there is no sense of morbidity there despite the prior knowledge of this. This is because a series of purification rituals as well as those intended to send the souls to salvation was performed there. Poojas and prayers for Hindus, Christians, Jews, Muslims, Jains, Sikhs and people of various faiths were included. The human mind has a way of projecting things at the least of suggestions and the complete eradication of such negative thoughts point out to the efficacy of those prayers.

Lord Parashurama, one of the incarnations of Maha Vishnu, is supposed to have cleansed the world of corrupt Kshatriya rulers. He is said to have cleansed and freshly irrigated the Earth with their blood a whopping 22 times. The war for inheritance tore the Kaurava and Pandava cousins apart. The Mughal history is full of murders of relatives. In modern times too, there were a lot of murders of leaders in this country.

Lord Mountbatten, who formally handed over power to the Indians, was familiar enough with Indian customs and beliefs. However, some hold the view that he declared freedom at an “inauspicious” time and date. According to them, this was deliberately done to keep India down as its ‘birth’. Many, however, say such a statement is mere superstition. Mahatma Gandhi was an advocate of peace. Yet, the number of killings during Partition is unbelievable. Some seers believe that proper prayers and the sankalpam of the last rites of hundreds of thousands of unknown souls lost during Partition would go a long way in healing the still smouldering embers of a violent Partition. For that, one would have to face up and acknowledge the undeniable truth of Death, the ultimate rest-facilitator to Life.