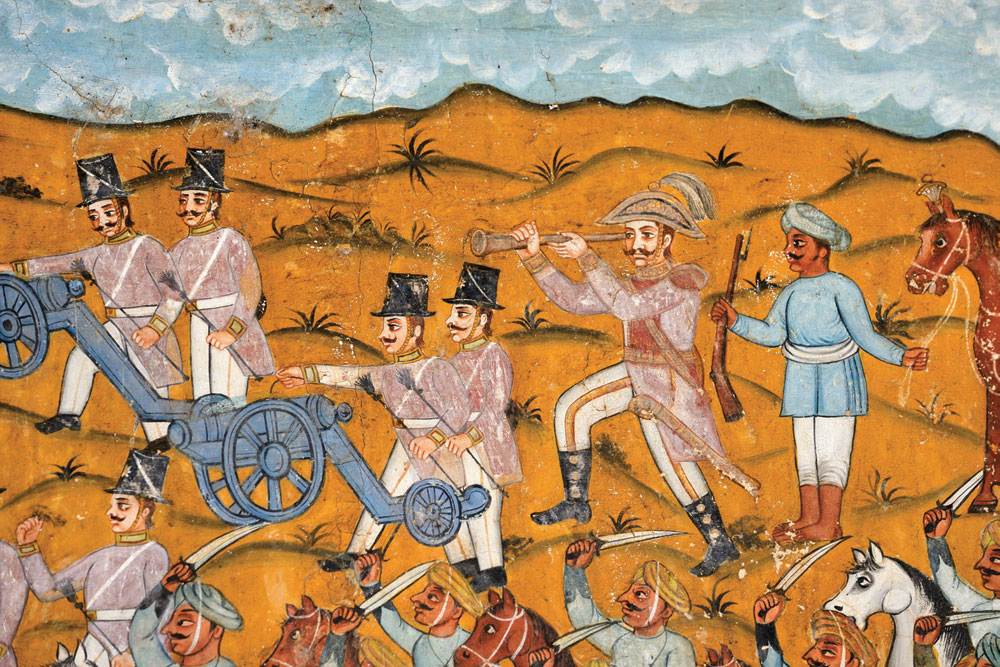 
IN 1782 AS the storm clouds gathered over the Bay of Bengal, a most extraordinary sight could be seen in those turbulent waters. Ships belonging to the fleets of the two most powerful naval forces in the world, France and Britain, were engaged in a violent battle over a most unlikely prize—Mysore. French admiral Pierre-Andre de Suffren had led his ships in a series of calculated feints and savage attacks on behalf of Hyder Ali and Tipu Sultan of Mysore that decimated the British ships in the Bay of Bengal. Suffren first directed his fleet towards the Americas, following a French armada, to mislead British spies. He then turned around and mounted a series of remarkable battles against British Admiral Sir Edward Hughes off the coast of Trincomalee. Aboard his flagship Heros, Suffren counter-intuitively moved into the centre of the British fleet, causing terror and havoc. Suffren won a series of stunning naval battles and it is even believed he met with Hyder Ali to discuss a possible joint action against their common enemy.

Largely forgotten today, France’s involvement in Hyder Ali and Tipu Sultan’s decades-long violent resistance to the British forces was part of a global imperial and economic confrontation. Throughout the 18th century ancient enemies France and Britain traded arms and insults across the globe as they fought for supremacy in their growing empires in the Americas and in Asia. For the ‘France des Lumieres’, the ideological imperative was not to replace a British empire with a French one, but to rid rightful Indian rulers of their British oppressors. In Mysore, Hyder Ali and his Mysore battalions fought alongside French commanders such as Joseph Francois Dupleix, Lallee de Motz de la Sale and the Marquis de Bussy. Indeed, during the Second Anglo-Mysore War (1778-1784), French soldiers were actively involved in the operations, a fact which was celebrated in the painting of The Battle of Pollilur, which was recently sold at an auction in London amongst much effervescent excitement. In the famous Daria Daulat murals at Seringapatam, commissioned by Tipu and upon which the paintings are based, the French officer the Count de Lallee is clearly shown, moustachioed and using a large telescope to view the battle.


In the famous Daria Daulat murals at Seringapatam, commissioned by Tipu Sultan and upon which the battle of Pollilur is based, the French officer Lallee de Motz de la Sale is clearly shown, moustachioed and using a large telescope to view the battle

As for Admiral Suffren’s gallant naval attack, it was ultimately destined to fail in its objective of dislodging the British from Mysore. The general sent from France to triumphantly conclude the naval attack on land, was a year late. “M de Bussy joined us in Trinquemale on the 10th of March,” wrote Suffren gloomily, “his health is absolutely ruined, but I suppose that is still better than him being dead.” The unfortunate general described in these unflattering terms was the once dashing and gallant Marquis de Bussy, who had travelled through Hindustan on elephants in the 1750s, clad in brocade and wearing black velvet shoes, accompanied by liveried servants and a set of musicians singing his feats of chivalry. But by 1783 the Marquis was a broken and ill man, “a ridiculous, powdered caricature of a man, weighed down by his medals” according to a scathing French commentator, and the battle was lost.

Even the proposed Franco-Mysore alliance was doomed for failure. Hyder Ali died in December 1782, causing consternation among the French. “The late nawab was the sincere friend of the French…I am devastated by his loss, both for myself and for the French nation,” wrote a dismayed French general. The end of the American Revolution in 1782 also meant that the French king Louis XVI signed a peace treaty with Britain, and had to agree to stop supporting anti-British activities in Mysore. Nonetheless, from 1783-89, the French state continued to look for ways to maintain links with Mysore, to use as a base for joint operations against the British, while also juggling with debilitating treaties according to which the French were not allowed to have such allies in times of peace with Britain.

In 1787, looking to establish commercial relations and still hoping to convince Louis XVI to help him militarily, Tipu decided to send a diplomatic mission to France on a ship with its own standard carrying a party of 400 Indians, described by French diplomat Pierre Monneron as “the first Indian ship to appear in European waters.” Almost uniquely among Indian rulers, Tipu was aware of the menace posed by the British. As a French Colonel wrote, “He is perfectly aware of the importance for an Indian ruler that no European nation near him grows too powerful.” French financial constraints meant that the French were for a long while evasive about financing this embassy. In the end, a delegation of just 45 people boarded the Aurore and set sail for Toulon, in southern France. Included in this party were three envoys—Muhammad Darvesh Khan, Akbar Ali Khan and Muhammad Osthman Khan. The party stayed in Paris for three months, creating a great deal of flutter amongst the Parisian cognoscenti as they strolled down the Champs Elysees, triggering a veritable ‘Indomania’. The embassy was tasked with bringing back French engineers, artisans, gardeners, doctors and also manufacturers of porcelain, clocks, weapons and wool.

In the end, though the Parisian fashion circles were delighted with the embassy and even designed a dress for ladies “a la Tipou Saib”, Louis XVI was not able to commit to any military assistance. The unfortunate King was himself just a few short years away from losing his head as France’s mounting debt made for a volatile citizenry.

In the aftermath of the French revolution of 1789, it was believed in French diplomatic circles that an anti-British “revolution” could liberate India. Right up till Tipu’s death in 1799, French diplomats like Monneron and David Charpentier de Cossigny believed that “no sooner would the French army have landed in India that our old ally Tipu Sahib would join his resentments to ours and attack… and the people of India would rush to shake off the abhorred yoke [of the British colonisers].” Soon after the execution of Louis XVI, the executive council of the French Republic wrote to Tipu, “hero of Hindustan,” to no longer address his letters to the French monarch, for a “glorious revolution” had transformed France into a Republic. Nor indeed did the new French Republic see any contradiction between its recent regicide in France and its support for an absolute monarch in Mysore and were at pains to explain to Tipu the “sound principles” of the French revolution, to counter the “hideous” notions the British have been spreading. And Tipu himself, autocrat and supreme monarch though he was, enthusiastically supported French Revolutionary ideals and styled himself “Citoyen Tipu”.

But the war for American Independence had almost bankrupted the French state, causing deep malaise and fiscal restructuring, and there was little enthusiasm for sending troops and money overseas. In one instance when Tipu wrote to France asking for 5,000 troops, the Governor of Mauritius Cossigny wrote to Tipu rather cynically urging him instead to attack the British with all his resources. “Do not engage in big battles but attack your enemies as often as possible to fatigue them,” he wrote. “Make big monetary sacrifices, trust in what I tell you… what is the use of money? I hope your fame will surpass your father’s, your father showed the way to Delhi.”

French ambitions for India did not die out completely, however, and in 1798 a young, daring, and swashbuckling commander of the French army landed in Egypt, his ambitions stoked by the example of no less a person than Alexander the Great. Setting aside a proposal to invade England itself, with his “Armee d’Angleterre”, Napoleon Bonaparte instead invaded Egypt with the stated aim of controlling the eastern Mediterranean and cutting off Britain from its territories in India. In February 1798 Napoleon even wrote a letter to Tipu, lauding all his anti-British efforts but this letter was intercepted by a British spy, thoroughly alarming the British and fuelling their determination to deal with the recalcitrant Mysore state once and for all. In 1799 General Wellesley led the British army into Seringapatam and Tipu Sultan was killed, sword in hand. The cypress trees in the Lal Bagh where Tipu’s body was laid to rest next to his father’s, may have arrived in Mysore through the 1788 embassy to France.

History, sometimes, is in the details.