My Cuisine versus Your Cuisine

Who is the winner in the war between biryani and poha? 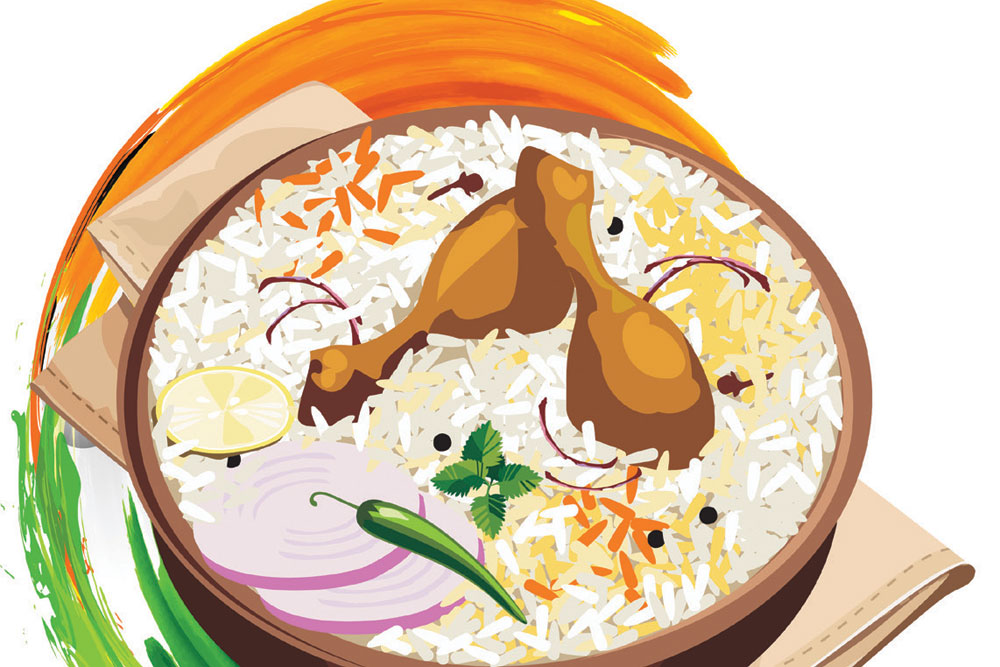 
A SINGLE GRAIN of rice carries the delicate aroma of saffron and ghee; the ancient spice mix of cloves, cardamom and pepper; and a method that harkens back to warriors whose advance parties included cooks who would slaughter a goat, combine the ingredients in a handi and cook it for hours in a pit. The grain of rice takes on the scent of the land and the name: biryani. Another grain of rice is flattened, fluffed up after being moistened, takes on the delicate scent of lemon, the bite of mustard, ginger, onions, green chillies and curry leaves and the crunch of roasted peanuts. It becomes poha.

Many of us in South Asia eat poha either as a snack or for supper, and biryani for lunch or dinner. So why must we choose between the two? The commandment to choose one of these two comes from the premise that a dish has a national and historical meaning for a people. By choosing poha, say the BJP and Sangh Parivar ideologues, you are choosing to be a Hindu, an Indian and harkening back to the ancient dwellers of South Asia. Such a narrative subsumes a cultural practice within a religious identity.

But those who disagree with the premise would point out that both dishes are made with rice, both are part of cultural practices that have little to do with religion and both dishes have been welcomed in a land that is the melting pot of many cuisines.

While the narrative of ‘my cuisine’ versus ‘your cuisine’ resonates with the way we approach food, in the ‘biryani vs poha’ streetfight, the struggle is about the content of what belongs in India’s national food. For something to be regarded as ‘national’, one assumes that citizens/subjects and foreigners would have to associate those dishes with that nation or country. That all citizens of that country would be familiar with those dishes, which would be eaten, at least on occasion, and found within the geographical borders, perhaps with regional variations. By these parameters, it is hard to pinpoint the national dishes of India. Travellers to India in the 13th-18th centuries agreed on one thing: that Indians occasionally drank arrack distilled from sugar and a spicy rind of a tree called jagra (palm sap) and rice was a staple part of the diet. Not poha or biryani—simply rice. In fact, khichdi is mentioned by 16th century travellers, according to food historian KT Achaya.

Rachel Lauden points out in Cuisine and Empire: Cooking in World History that national cuisines, like nations themselves, emerged only in the last 200 years—and often in the last 50 years. It takes us to the heart of the question: why is a national cuisine created? War and nationalism are key triggers; in India, nationalism is the trigger for the ‘biryani versus poha’ debate.

Many have rightly pointed to the electoral process of democracy, a multi-party system and the hunger for dependable vote banks as the reason for the ‘biryani versus poha’ standoff. Modi’s promise of bringing a Gujarat-style economy to the rest of India has not panned out for reasons both within and beyond his control. Faced with a spate of defeats in state elections, the BJP has opted to use its ideological weapon of ‘Hindus first’ to create a dependable vote bank. But its choice of poha as synonymous with Hindus and biryani as a dish of the Mughal invaders is contentious.

As many have discovered, on the subcontinent, it is hard to take one dish and call it quintessentially ‘ours’. Historical influences—imperial (Mughal), colonial (British) and princely (local nawabs and kings)—blended with the post-Independence drive to fashion a hybrid Indian cuisine that also drew on the everyday dishes of the poor and the professional classes.

Hybrid does not blend well with the homogenisation required by nationalism. Even during the nationalist struggle when attempts were made to unify Hindus divided by the caste system, the choice of some nationalists was of a meat that had religious significance. The line that Tilak, Vivekananda and others chose to draw was between a cow worshipper and a beefeater. The Gaurakshini Sabha (cow protection committee) in 1882 was one of the most potent markers of the Hindu revivalist movements in the 19th century. Vivekananda too focused on energising Hindus in India and this is evident in his response to the question of whether meateating would include beef. No, said Vivekananda. All Hindus were united on one thing: that they did not eat beef. Why? Because the cow is a sacred animal and here his discourse links being a Hindu with religion and inhabiting the land of India. Cows and buffaloes were slaughtered for meat in abattoirs run by Muslims, so this group became the immediate target of rioters led by the gau rakshaks in the late 19th century. At no time did poha make an appearance as a symbol to unite Hindus, nor was biryani made into a symbol of Muslims. These dishes belonged to a cultural practice that transcended the religious divide.

We live in an age when ideas and cultures mingle at warp speed. Choosing a dish as ‘ours’ and demeaning another dish as ‘theirs’ doesn’t work when the dishes themselves are experiencing a renaissance of sorts and when the contours of the dishes are being shaped through experimental techniques that have not been ‘anybody’s’.


On the subcontinent, it is hard to take one dish and call it quintessentially ‘ours’. Historical influences blended with the post-independence drive to fashion a hybrid Indian cuisine that also drew on the everyday dishes of the poor and the professional classes

If the argument is that poha is part of India’s cultural tradition while biryani came with Mughal invaders, then it would be worthwhile to explore the DNA of a South Asian. Recent archaeological discoveries in Rakhigarhi, Haryana, dating to the Harappan Civilisation (4200 BCE) suggests that our lineage is hybrid in its make-up. The genetic reconstruction based on ancient skeletons from that period suggests that most Indians today carry ancestry from three ancient populations: South Asian hunter gatherers related to modern-day Andaman Islanders (Ancient Ancestral South Indians or AASI); Iranian-related ancestry which relates to early Iranian herders and hunter-gatherers (IHG) who formed a different lineage that split in 10000 BCE from the farmers and herders in the western Iranian plateau; and the Steppe pastoralists (from the Fertile Crescent in the Middle East). In India today, you have Ancestral North Indians or ANI (with a 17.5 per cent genetic contribution from the Central Asian steppe population) and Ancestral South Indians or ASI which draws on AASI and IHG DNA. Harappans do share an ancestry with IHG and Indian hunter-gatherers (AASI) but not with the Steppe pastoralists. The DNA evidence discussed in the two studies published in Science and Cell show that the genome from Steppe pastoralists was missing in the Harappan DNA. However, modern-day South Asian DNA carries some ancestry from Steppe pastoralists, suggesting that there was a largescale migration of Steppe pastoralists to the Indian subcontinent after the decline of the Harappan Civilisation. Some scholars suggest that cultural practices did not change significantly between Harappan and post-Harappan periods.

Rice was a summer crop for Harappans and was farmed there at the same time it was being domesticated in China. Recent findings from two settlements in Rakhigarhi suggest that a network of farmers supplied rice, millets and vegetables to the ancient cities of the Indus Valley. The similarity in the shapes of the cooking utensils such as the handi found at these sites suggests that wheat and rice, stews and vegetables may have been prepared in much the same manner as they are now, says archaeologist Jonathan Mark Kenoyer.

If, as geneticist VagheeshNarasimhan says, the genetic make-up of a majority in India is unaffected by invasions and empires after the Bronze Age (3500-1100 BCE) and if the history of the subcontinent is, as DP Agrawal puts it, a history of change in continuity, a history in which the cultural and religious traditions of Harappans provide the substratum for the latter-day civilisations, then there is a very good chance that poha and biryani (though called by other names) can be traced back to those times. A second century Tamil dish, oon sooru—a rice dish made with meat, turmeric, pepper, ghee and bay leaf—was a staple of Chola kingdom soldiers. Different communities have their own versions of biryani: Sindhi, Syrian Christian, Malabar, Hyderabadi, Awadhi and Kayasth.

Recently, an acquaintance returned from Sylhet in Bangladesh and showed me photographs of Saraswati Puja being celebrated there in pandals. There was a photograph of Saraswati flanked by two faces: a Hindu poet and a Muslim poet. A Hindu priest conducted the puja, while the congregation was mostly Muslim. In response to his obvious question—why, as Muslims, were they celebrating Saraswati puja?—the response was, it was part of their culture as Bengalis.

If the syncretic make-up of our cultural DNA includes rice in its flattened and fluffed-up forms and considering the hybrid nature of our genetic make-up, a biryani is as much ours as the poha on the Indian sub-continent.