A Nawab’s syncretism finds expression in his art 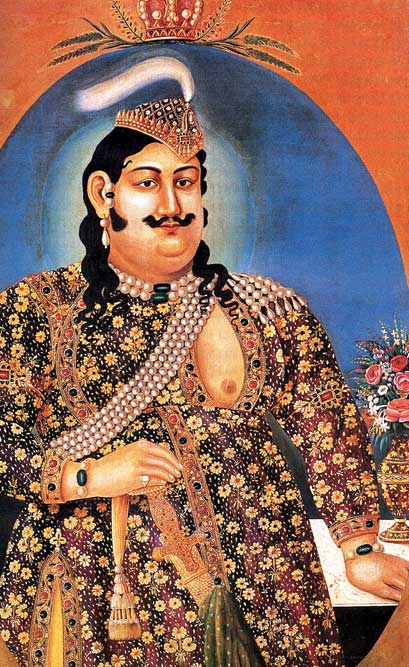 AN OBESE, DEBAUCHED ruler who sang and danced while the East India Company exploited his prosperous kingdom? A puppet king sympathetic to his suffering subjects but unable to help them? An Awadhi Nero who, toppled by the British at the age of 34, spent 31 years in exile far away from his beloved Lucknow, in Metiaburz, an estate in Kolkata that he fashioned into a simulacrum of his lost realm? Altogether, a decadent relic of the late Mughal period. This is what most of us think when we spare a thought for Wajid Ali Shah (1822-1887), the last Nawab of Awadh.

Perhaps our image of the Nawab as a fop is conditioned by the Protestant disapproval with which the British regarded his hedonistic aesthetic tastes and flamboyant private life. Perhaps our disdain for 18th- and 19th-century India’s feudal elites encourages us to throw the exquisite cultural baby out with the discredited socio-economic bathwater. Or perhaps some of us are simply thinking of Amjad Khan’s memorable performance as the Padshah-e Awadh in Satyajit Ray’s Shatranj ke Khilari (1977).

Wajid Ali Shah deserves a more sympathetic hearing, as we approach the bicentennial of his birth. He inherited a raw deal, having been born in an Awadh that was already controlled by the East India Company. Since its triumph over the combined forces of the Mughal Empire, the Bengal Nawabate and the Awadh Nawabate at the Battle of Buxar in 1764, the Company Bahadur had run a highly profitable protection racket. In Delhi and Lucknow, as elsewhere, it had installed a Resident and a British military force, to be maintained by the hosts. As the expenses of these permanent guests mounted, the extraction of local resources and their transfer to the British administration accelerated at an alarming pace. When Wajid Ali Shah came to the throne in 1847, power was concentrated with the Resident, while the Nawab bore the increasingly difficult responsibility of governing his people.

At first, Wajid Ali Shah attempted to assert himself. He raised cavalry and infantry regiments, reviewed the judicial system. The unamused Resident put a stop to these projects and the young Nawab retreated into romance and the arts. He was no dilettante. An accomplished poet, he wrote under the takhallus or pen name of ‘Akhtar’ in Persian, Urdu, and Awadhi. He patronised many fine poets including his ustad, Mirza Raza ‘Barq’ and Ghalib. The poet and playwright Agha Hasan ‘Amanat’, author of the seminal Urdu opera, Inder Sabha (1853), was at the Nawab’s court and was inspired by the Nawab’s own aesthetic experiments.

In his autobiography, Ishqnama (‘Chronicle of Love’, 1849-1850), the Nawab candidly recorded his sexual experiences as well as his ecstatic transports. One afternoon, he writes, while sitting beneath a tree in a garden, he tore off his clothes and stripped down to a loincloth. Smearing himself and his female companions with ash, he became, in this liminal moment, a yogi. The heightened mood grew more enchanted as the assembly went down to the river, evening fell, and fireworks exploded in the sky. The setting of this trance-like performance was Kaiserbagh (‘Emperor’s Garden’), an architectural fantasia that the Nawab designed and constructed between 1847 and 1850 in Lucknow. An earthly version of the paradise garden, it was a complex of palaces, courtyards, gardens, pavilions, tombs, and royal bazaars.

Had he been European, Wajid Ali Shah would have been acclaimed as a 19th-century artistic visionary. He not only achieved what Wagner had merely announced, but also anticipated Diaghilev and the Ballets Russes by six decades. The Nawab, I would argue, anticipated Hindustani and Parsi theatre as well as popular Indian cinema

Kaiserbagh became the platform for an artistic efflorescence, of which the Nawab was chief patron, impresario, and dramaturge. He respected the classical yet embraced the popular. The sonority of dhrupad yielded before the ghazal and the thumri, prejudicially regarded by purists as ‘lighter’ forms. Trained as a vocalist by musicians like Pyar Khan, Jaffar Khan, and Basit Khan—descendants of Akbar’s legendary musician, Mian Tansen—the Nawab composed ghazals and thumris under the style of ‘Akhtarpiya’. His songs passed into popular culture and were widely loved and sung. Trained in Kathak by his guru, Maharaj Thakur Prasad, the Nawab guided this dance form towards its modern shape at Kaiserbagh, working with the gifted brothers Kalka Prasad and Bindadin. Originally a Vaishnava temple dance, it had been endowed at his ancestors’ courts with a sensuous Indo-Persianate elegance.

The Kaiserbagh moment found its high point in Wajid Ali Shah’s supreme invention, the Rahas. The word connotes a range of meanings, as anyone who consults Platts’ Dictionary of Urdu, Classical Hindi and English will attest: loneliness, solitude, hiding place, mystery, copulation, merriment. All these nuances suffused the Nawab’s glorious Rahas, an ensemble performance that wove dance, music, theatre, mime, scenography and architecture into a grand multi-media presentation, an opera. Inspired by the Raas leela, the dance of Krishna and the Gopis in Vrindavan, the Rahas portrayed mythological episodes, with the Nawab often playing Krishna. The first such production, Radha Kanhaiya ka Qissa, was staged in 1843 when he was still heir apparent. It featured a cast of male actors from Mathura, with the prince’s favourite wives as Gopis, a startling departure from royal etiquette. Rosie Llewellyn-Jones, author of The Last King in India: Wajid Ali Shah (2014), emphasises the importance of this moment: ‘For the first time a Muslim monarch was directing a play about Lord Krishna and his amorous affairs, an event which could only please his many Hindu subjects.’

Once a year, the Nawab would costume himself as a yogi, wearing saffron robes, his face and body smeared with ash, pearl necklaces around his neck and a japa-mala in his hand. During this spectacular public event, known as the Jogia Jashan, he invited Lucknow’s citizens, regardless of religion and caste, to dress as yogis and yoginis and participate in a pageant that blurred the line between royal ethos and public space, stylised art and normal life. Simultaneously bhogi and yogi, voluptuary and ascetic, the Nawab enacted a key Tantric dissolution of opposites, that between gratification and renunciation.

Had he been European, Wajid Ali Shah would have been acclaimed as a 19th-century artistic visionary. He not only achieved what Wagner had merely announced, but also anticipated Diaghilev and the Ballets Russes by six decades. Richard Wagner (1813-1883), who was the Nawab’s exact contemporary, wrote The Artwork of the Future—his pathbreaking essay advocating a Gesamtkunstwerk, a ‘total art work’ combining all the arts into an expanded theatre—in 1849. In that year, Wajid Ali Shah was midway through building Kaiserbagh. The Nawab’s Rahas was a Gesamtkunstwerk achieved on a scale of sumptuousness, subtlety, and aesthetic integrity that Wagner dreamed of but could never fully execute—at least partly due to his tendency to mistake bombast for grandeur. The Nawab, I would argue, anticipated Hindustani and Parsi theatre as well as popular Indian cinema.

On February 11th, 1856, Wajid Ali Shah was deposed and exiled. He accepted his fate with dignity. Learning that his subjects were mobilising to resist the annexation, he urged them to stand down. He was their Jan-i Alam, ‘life of the world’. Plunged into grief at his departure, many of them followed him as far as Kanpur.

Barely a year later, a population seething under the East India Company’s humiliating exactions finally rose up in anger. On March 29th, 1857, in Barrackpore near Kolkata, the sepoy Mangal Pandey fired the first shot of what would soon turn into the Great Revolt. Military units across the Gangetic heartland and central India turned on their British officers. Civilian populations joined them. On May 30th, 1857, the rebels entered Lucknow, penning the British into the Residency. With Begum Hazrat Mahal, Wajid Ali Shah’s courageous wife, as one of their leaders, they proclaimed the Nawab’s 12-year- old son Birjis Qadr as Padshah-e Awadh, King of Awadh. His father’s compositions on their lips, memories of his Rahas and Jogiya Jashan performances before their eyes, the rebels hugged the boy-king. “You are our Kanhaiya,” they told him. “You are our little Krishna!”