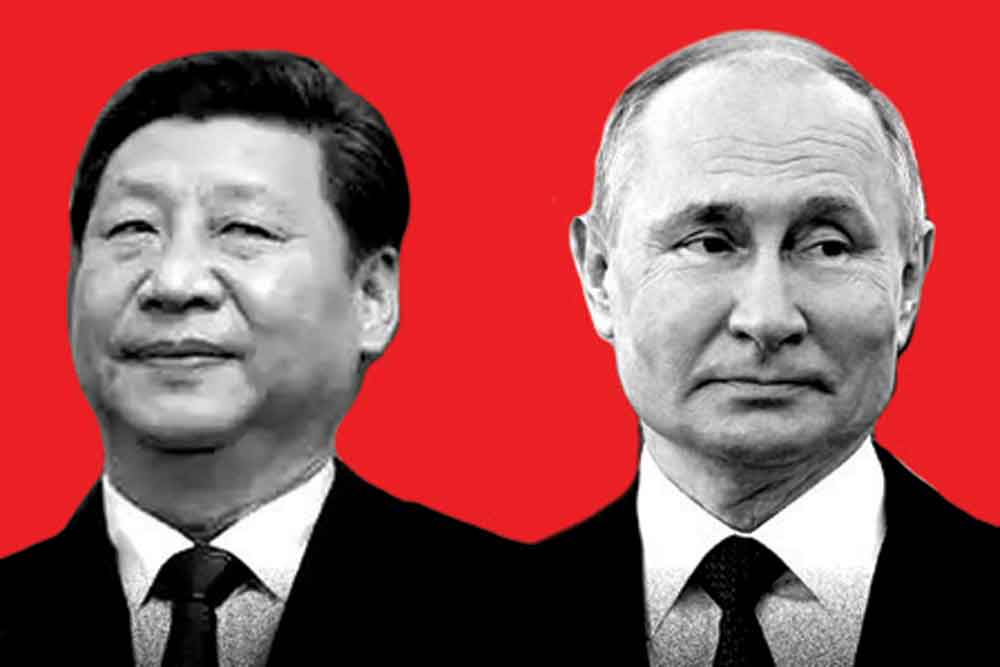 DICTATORS LOVE TO BE provoked. Give them a chance to play the victim and they know how to stage their psychosis on a global stage. Lately, in such moments of seemingly inspired international moralism defying the useful paranoia of the saviour-protector-potentate, it is the nationalist opera of hurt and rage that prevails over the fleeting display of democratic solidarity. Even though dictatorships achieve a simulated sense of social idyll, beneath the controlled calm, they crave conflicts. What they need more than the obedient subject is the possibility of the enemy. And if there is not one, it is the dictators’ duty to conjure up one from their historical exceptionalism. The enemy ensures, and even justifies, the ideology of conflict.

The two permanently provoked dictators of our times are Vladimir Putin and Xi Jinping, and both, being the sole custodians of national destiny seeking the mandate of eternity, play out their victimhood on a global stage. It is a performance that feeds on the anxieties of the domestic audience and challenges the morality of liberal democracies. They are empire builders and national guardians. Putin, still floating in the post-Soviet grief of a leader caught between the intoxication of nostalgia and the disorientation of the present, is at his dictatorial best when he plays the victim, humiliated by the decadent West, fighting for justice. He believes he has the mandate of memory, which is stronger than the much-rewritten history.

Xi is the Helmsman who aspires to match his legend with the Mao lore. His revolutions, unlike the Chairman’s, are staged as extra-territorial psycho-terror. Like any other dictator, he doesn’t trust his people even as he, unlike his counterparts elsewhere, keeps them rich and modern, if only they can resist the temptations of the Fifth Modernisation (or the taboo of democracy as understood by the West). The Xi project, codified as the Chinese Dream, is a manifesto for the pursuit of the Chairman cult and the preservation of the party apparatus, and it spells out the behavioural imperatives of a superior society. No other dictatorship is as good as China in deploying technology, psychology, civilisational loftiness and the marketplace to create a closed system of ultra-nationalism and ideological surveillance.

It’s the struggle of these two victim-dictators to consolidate their politics of eternity that rattles the world today. Putin’s fascism has given us the first full-scale land invasion after World War II. Invoking racial as well as historical rights and the betrayal by blood brothers, he has declared war on a sovereign nation, and dared the ‘rotten’ West, which he knows lacks the kind of nationalist conviction that keeps him politically relevant—and indispensable. Russia’s war on Ukraine is Putin’s war on an inferior system presided over by weaker men. The way he has neutralised the sanctions has only convinced him that the West’s balancing act between pragmatism and idealism only brings out the empty core of liberal democracies. He remains practically unchallenged, unlike his Nazi predecessor, in the war of delusional motives. Provocation works for him.

As it does for Xi. The visit of US House Speaker Nancy Pelosi to the ‘renegade’ island of Taiwan was just another provocation from the West, read America, that Xi needed to show his contempt for a superpower without authority—or the ideological focus that distinguishes China from his democratic antagonist. In response to Pelosi’s photo-op in Taipei, just another instance of fake legitimacy that maddens the residents of Zhongnanhai, Beijing has launched first a verbal fusillade and then a military drill to intimidate the tiny neighbour and send out a message to those who still have doubts about China’s place in the world. Beijing openly challenges America because the latter has become a tentative power—and come a long way from Wilsonian internationalism. Xi can afford to be confident about the death of the American will.

In comparative imperialism, America has already lost its pre-eminence—and ceded ground to the worst violators of human dignity. Perhaps the last gasps of the ‘noble imperium’—a system of moral internationalism—lasted till the George W Bush presidency, no matter how much liberal curse it had to live through. We could still go on agonising over the wages of the phoney war (Iraq) and the unfinished agenda of the just war (Afghanistan), but the neo-conservatives had stuck to the ideal of Freedom First. Today, America leads a liberal democratic order which has consistently failed to win the argument with the Putins and the Xis. Their rejoinder to the absolutism of territorial freedom or to the moral certainties of the democratic West goes unchallenged because the leader of the free world has ceased to be the defender of the free world. In the 21st century balance of power, America’s speaker can only win the cameras. Its provoked enemies roar their way to the nearest border.