The Whispering Conscience of Nitish Kumar

In the end, there was only one man left to play the morality script in Bihar 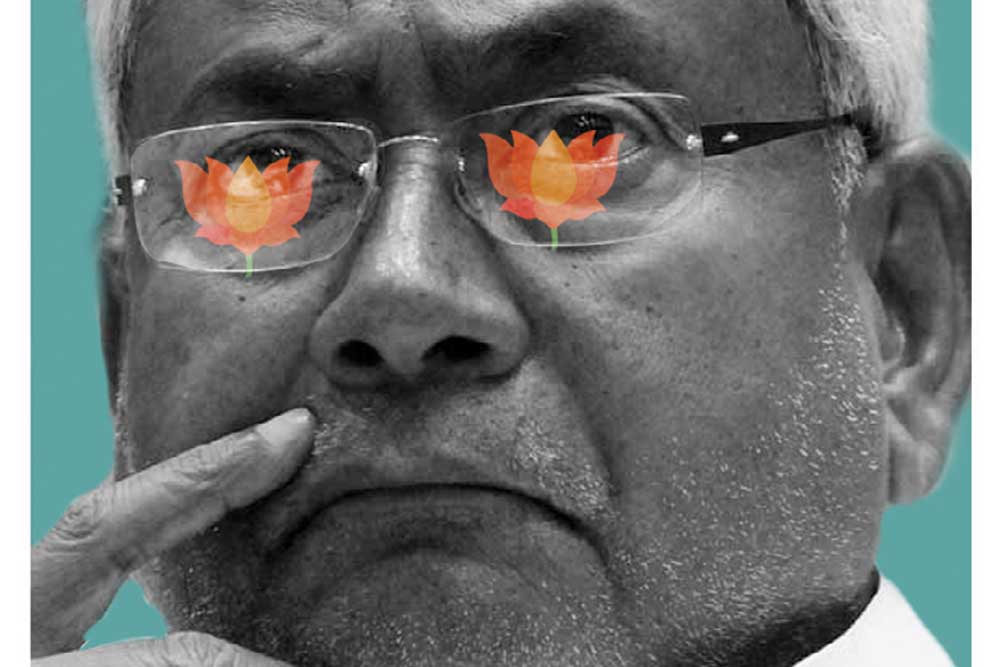 WHEN THE MORALITY play of socialists reaches its finale, the stage gets littered with fallen comrades and broken pledges. A bit of Shakespeare with a dash of farce. Today, the ageing, exhausted children of Lohia may have been co-opted by the Establishment, but they still retain their capacity to shatter the idyll, and quicken the pulse. Lalu Prasad and Nitish Kumar are two monumental towers of a hoary legacy. And on the night of July 26th in Patna, one of them listened to his conscience, the other to his brood, and the fallen and the liberated in Pataliputra once again provided a dramatic twist to Indraprastha.

When Nitish returned to his natural ally to form an NDA government in Patna, it was an act of cleansing, a moment of liberation. The unravelling of the brotherhood was inevitable for two reasons. Lalu, the jesting socialist who refused to realise that the joke had been on him lately, would not let Bihar go even in defeat. For 15 years, in person or by proxy, he claimed ownership of India’s most misgoverned state. Even as Bihar became a byword for lawlessness, Lalu, with a camera-friendly spittoon by his side and cows lazing around in his backyard, played the upcountry bumpkin to perfection. It was choreographed kitsch that kept the shirtless in good humour.

It was Nitish, the sober socialist, who brought the so-called ‘jungle raj’ of Lalu to an end, and he built on the ruins in his first partnership with BJP. As Lalu retreated to a world caught between the courts and his family, Nitish, the original poster boy for professional secularists, grew publicly conscious of his alliance with BJP, even though it was not the first time that he was in the Right company. It would be uncharitable to call Nitish a secularist available to the highest bidder, but he always realised the bargaining power of being the cleanest of the secular front. Conscience, in Nitish’s case, is a tricky whisperer. The last time it intervened, he came to the conclusion that living in Modi’s shadow diminished his secular aura. In his book every departure—or rupture—marks the arrival of a morally refurbished version of himself.

There he is, again, and what makes the latest conscience-driven liberation drama revelatory is the wreckage of a grand pretence in Indian politics: the Mahagathbandhan. Born out of a shared fear of BJP in the state’s last Assembly election, the alliance of Nitish’s JD(U), Lalu’s RJD and the Congress was, from the very beginning, a coming together of incompatibles. Nitish, as always, was trapped in his own image; Lalu, in his new role as the patriarch, was playing out a vulgarised Bihari version of The Godfather; and Rahul Gandhi was, well, playing himself. As the RJD chief presided over the other big socialist dynasty in the heartland, power meant an exercise in entitlement and parental responsibility. The jokes became worse, and in the new jungle raj, the king and cubs were villains.

Lalu was blatant, and secularism was his shield. And all the while the other partner, the weakest of them all, remained true to himself: aloof and ineffectual. In the Manmohan Singh era, Rahul was a comparatively better politician as he excelled in the role of the insider-outsider. There were moments when the princeling, angry one moment and meditative the next, bared a mind refreshingly different from the family’s or Government’s. For him, at times, not being in power meant being a singular, extra-constitutional rejoinder to the immoralities of power. He trashed Manmohan by calling his government’s ordinance aimed at protecting convicted legislators complete nonsense. He ridiculed the communists of Bengal for all the right historical reasons. Those were flashes of an independent mind; otherwise it was, and still is, the story of a man rehearsing a script beyond his comprehension and capability. In Modi’s India, his contribution to making Congress inconsequential is immense, for his counter-argument, whenever it happens, is the statement of someone still struggling to figure himself out in this whirl. There were moments that offered redemption. Lalu’s family role in the Mahagathbandhan was one of them. But the rebel was elsewhere.

In the end, there was only one man left to play the morality script, and that was the secularist for whom his conscience is the most trusted ally in the pursuit of power. It has served him well so far. Let’s hope it will remain quiet for a while.