The demolition of the Marad flats show that in India, self-righteousness holds greater sway than rational thought 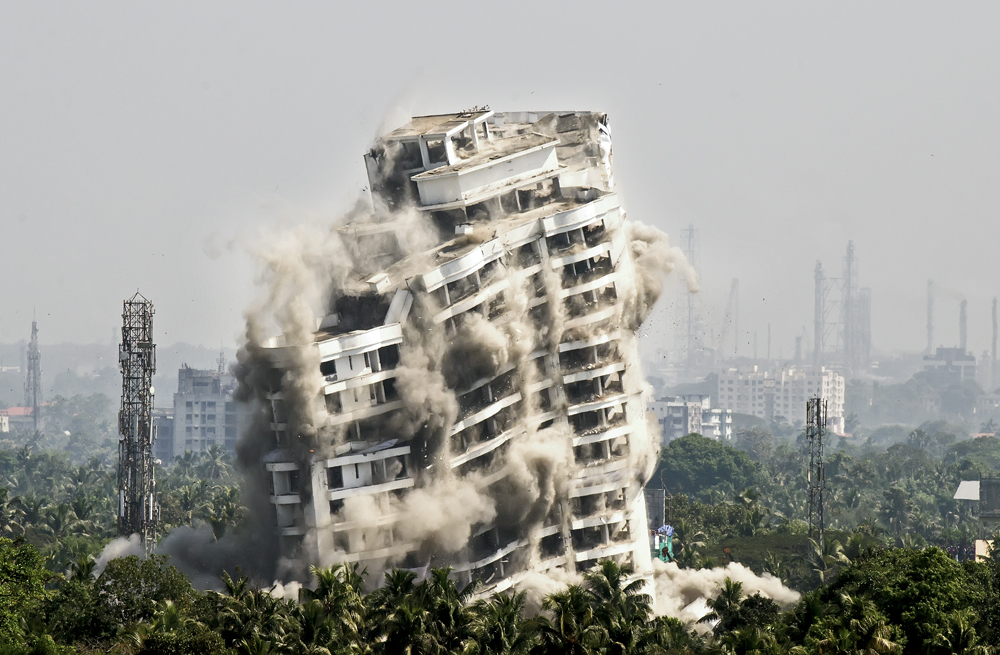 God is supposed to have taken six days for Creation followed by a day of rest. It is a scientific fact that the whole world as we know it can be annihilated by pushing a few buttons. Nuclear fission or fusion—whatever be the technology used, potential destruction is just a mad thought away.

Whether it is a human being or a non-organic structure, like the infamous Marad flats, there is an irrevocable finality about becoming non-existent. Corruption in India can hold its own with the burgeoning population, with the latter being a no-no subject for anybody to address, despite the urgency to do so.

Everybody in India agrees vehemently that corruption is bad. Yet there is a strange reluctance on the part of all parties involved to do anything more than a cosmetic tweaking of the merrily corrupt system.

India, while far from being a destitute nation, does not have either the moral or financial right to waste. We are perennially short of resources—clean air, potable water, enough produce to feed our millions and adequate shelter for our homeless. Keeping these factors in mind, the pulling down of the over-discussed Marad flats in Kerala is a crime.

The short point is that the precisely engineered collapse of the domicile benefitted no one. The lush greenery has a patina of dust over it. For a little while, at least the area could have given fair competition to the air-laden pollution that passes for Delhi’s atmosphere.

Humongous quantities of steel, cement and other building materials were wasted, not to mention hours of human effort. On top of that is the total sense of loss for the flat owners, both financial and emotional. Inflation in India being as predictable and steady as the daily eastern sunrise, it would cost the owners much more than the paltry compensation they were awarded in exchange for being abruptly homeless.

The Marad flats epitomised corruption in construction. How many of the inhabitants were aware of the legality or illegality of the project is unclear. The first lawbreaker in this case is undoubtedly the builder of these flats. With the insouciance of an experienced businessman in India, he would have broken whatever law needed to put up the structure, keeping the one code of conduct, crucial for success in enterprise. The builder would have ‘met’ (read bribed) the concerned authorities. It was not as if the buildings mushroomed overnight. This could only happen with the covert acquiescence of the temporarily blind law guarantors.

The usual insurance (guarantee that breaking the law would be of no consequence) did not work this time around. There would be a price to pay for flouting the law. The verdict? Demolition!

The built-up space was reduced to nothingness. Had there been a stay on the construction, it would have made sense. Reducing a proud, tall structure to rubble smacks of an arrogance that we cannot afford. The built-up space could have been used for many things if the hapless owners had to be penalised.

The builder could have been heavily and punitively fined. His other assets could have been attached in lieu of the illegal financial gains he made from these outlawed constructions and that would have given the government much needed resources. In China, if individual A is found to be corrupt, the financial assets of his family and known friends are frozen. This leads to peer pressure on the person to desist from such activities. Society itself does a rudimentary policing of the people. On the other hand, there is very real danger of such a system ending up as draconian curbs on wealth creation.

One of the most disgusting and probably politically correct statements is that the flat owners were ‘rich’, and that therefore, they could absorb, nay they deserved such a setback. The Hindu tenets have put down Dharma (righteousness), Artha (wealth), Kama (desires) and Moksha (salvation) to be the natural progression of human life. Unlike in the West, to be successful is touted to be a sin. India’s place in the world follows this sad route map. We had a vibrant and vital civilisation when the West was looking to Eastern colonies to boost themselves. Yet today, despite a large part of human population with an Indian DNA, our international relevance is nowhere close to where it should be.

While America insists on ‘democratisation’ of many countries, it is fully aware that it will laugh out of the uncomfortable financial juggernaut that China has become. Until India returns to its roots of economic well-being, we can only be a Third World country relegated to the end of a long queue for relevance—both domestically and otherwise.

Both the irrational Marad flat verdict and the jubilation at this shows that in contemporary India self-righteousness and law hold greater sway than rational thought and justice.