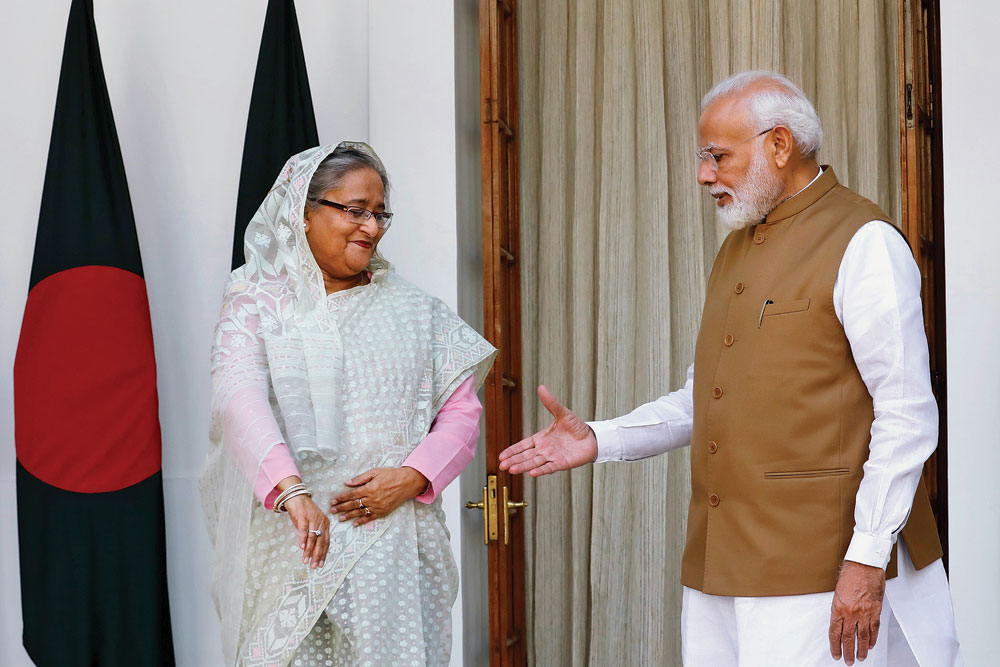 
This year marks the 50th anniversary of Bangladesh’s independence, and the centenary of the father of Bangladesh’s independence Sheikh Mujibur Rehman’s birth, an appropriate time for some evaluations. Keeping aside the many current bilateral problems such as river waters flowing from India to Bangladesh, the distorted trade balance overwhelmingly in favour of India, the repeated deaths on the border caused allegedly by trigger-happy Indian border guards, there are some basic features and principles which are useful to keep in mind, and which serve as guides to action.

India claims that if neighbours keep their basic national concerns in mind, they will go the extra mile in accommodating their interest—shorthand for the Gujral doctrine of long ago. No one can deny that Dhaka has largely delivered, and the government of Prime Minister Sheikh Hasina’s Awami League has taken many bold steps in establishing the platform for progress with India in a wide spectrum of activity.

Bangladesh’s dilemma is of being a small country (only relatively small when compared to India)—adjacent to a bigger one, though Dhaka’s superior success to India in human development indicators and per capita income must belie any sense of superiority in talking down Bangladesh. A self-confident Bangladesh identity is growing fast and it is important for every Bangladeshi leader to parlay with India on an equal footing. It is also important for India to enjoy good relations with the second or third largest Muslim country in the world.

Like India, Bangladesh is not a united and uniform country, but divided by politics, class, and identity. Both India and Bangladesh like to profess they enjoy the most amicable of relations. That is good rhetoric; but in reality, this rosy picture is too often vitiated both by India’s domestic politics and Bangladesh’s internal tensions. One negative reality is that positive measures and mutual goodwill can be derailed by political manoeuvres by the ruling party, or government affiliates, or opposition parties, who have no stake in beneficial bilateralism. The Bangladesh-India friendship has been hostage to the psychological and physical impediments and vagaries of politics on both sides of the border. Every regressive action on one side has consequential negative reactions on the other side. This has been in full evidence in the last month of April, with demonstrations and deaths in Bangladesh during Prime Minister Narendra Modi’s visit, and ill-considered allegations about Bangladesh by highly-placed politicians in India. Neither country should be an election issue in the other; even if the next elections are years away in both countries, every prime minister should know that he or she has only a narrow window of opportunity, and it cannot be frittered away by idiocies and fake news.

History’s reach is long, and the partitions of 1905, 1947 and 1971 cast a shadow over the present. In this Bangladesh generation, there are those who believe their existence as ethnic Bengalis is as, or more, important as the faith they practice. Such persons are opposed by separatist fundamentalists who profess the notion of Islamic solidarity, for whom the break with Hindu India of 1947 was more significant than liberation from Pakistan, and who spurn the cultural, economic and literary pull of adjacent India. They wish to leapfrog India by connections with Saudi Arabia, China, whichever country can serve this purpose. It may take several more generations for the traumas of partition and the liberation war to heal. India must make sacrifices towards the positive outcome of that entirely domestic process. Harnessing inattentive political will, fickle attention span and bureaucratic inertia is necessary to impart momentum in a positive direction, never forgetting that there is no such thing as gratitude in international relations, and it should not be sought after.

Short-sighted hardliners, Hindu chauvinists and politicians indifferent to bilateralism must be obliged to devote themselves to bestow predictability to the relationship and strengthen economic, social and cultural exchanges. Fundamentalists on both sides of the border must realise that there is no traction in their attitudes. Every issue seen as an irritant by Bangladesh must be handled by India with generosity, non-sectarian sympathy and humanitarian sensitivity. This is essential to grasp existing opportunities and discover new ones. The establishment of greater connectivity by land, river, sea and air, and free movement of commerce and capital will lead to development in both countries without any detriment to sovereignty and independence in either. In time, there could be free movement of labour also on the lines of Nepal and Bhutan.

Famous Bangladeshi economist Rehman Sobhan has warned that ‘the big neighbour remains only marginally concerned with the small.’ This prevailing sentiment can only be overcome by diligent attention to detail. It is for influencers to keep New Delhi’s attention fixed on Bangladesh’s receivables from India. Stability and prosperity in Bangladesh are essential for Bangladesh, but also for India. This is the hard reality. A Kolkata-based academic, Omprakash Misra, once claimed that India should forget history and Bangladesh should forget geography. The inverse is also true. Bangladesh should forget history and India, geography. It is in India’s self-interest that Bangladesh should not be ‘India-locked’. In our globalised world, any sphere of influence is a misnomer. Every nation has multiple choices of friends and benefactors, and Bangladesh must have outreach to South, Southeast and Northeast Asia. In any asymmetrical relationship, it is obvious that failures in delivery by the bigger party will always loom larger than its accomplishments. This is why the two high commissioners in New Delhi and Dhaka hold the most challenging diplomatic assignments in their countries.