Intellectuals and the Indian past 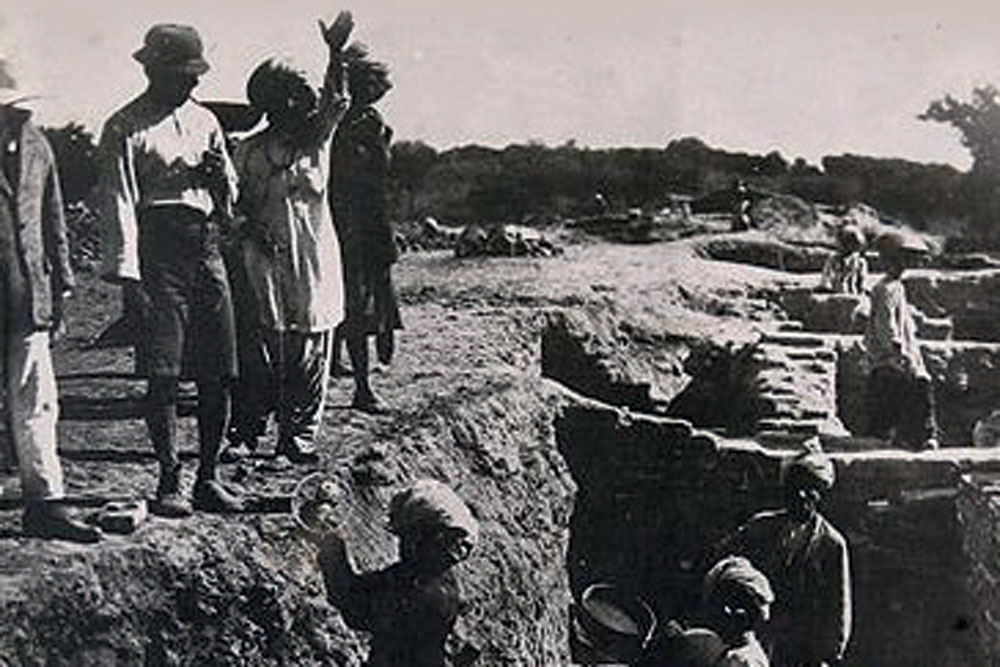 
IN 1528, DUKE WILHELM IV of Bavaria commissioned paintings by an artist called Albrecht Altdorfer, a founding member of the Danube School. A year later, Altdorfer presented to the Duke a monumental canvas—one that is now generally considered Altdorfer’s greatest work titled Alexanderschlacht (The Battle of Alexander at Issus). The historic battle of Issus had taken place in 333 BCE—nearly 19 centuries before Altdorfer—between the Greeks under Alexander the Great and the Achaemenids under Darius III (not to be mistaken for the famous Darius the Great). The Persians had lost that battle and what followed thereafter is generally understood to be the beginning of the end of the Achaemenid Empire. Altdorfer’s painting—a magnificent bottle blue swathe of evening skies at the top and a detailed battle scene in the lower half of the canvas—juxtaposes medieval Christian knights as stand-ins for Alexander’s Graeco-Macedonian army and the turbaned janissaries of the Ottoman Empire under Suleiman the Magnificent as a representative of Darius III’s Persian army. The Greeks of the Aegean had been transmuted into Christians of northern Europe and the Persians who worshipped Zoroastrian and other deities were now metamorphosed into Muslims of the Bosphorous. This painting implicitly also performed another role: it prophesised an apocalyptic vision—the battles between the armies of Christ and the anti-Christ. Reflecting on Alexandershclacht’s telescoping of various historical periods, German historian Reinhart Koselleck (1923-2006) wrote that ‘the present and the past were enclosed within a common historical plane’.

This urge to describe the past or render the messianic visions of the future recognisable to contemporary concerns is neither a medieval era habit nor is it something limited to the visual arts. In fact, so often does our own contingent self-bleed into descriptions that even the most subtle writers of fiction who pay scrupulous attention to detail can’t remain inured to their own authorial style and concerns. French novelist Marguerite Yourcenar, who wrote a fictionalised autobiography of Emperor Hadrian (ruler of Rome from 117 CE to 138 CE), has her protagonist writing to his heir, the emperor-philosopher Marcus Aurelius (‘My dear Mark’, he begins), in the manner of a French existentialist: ‘I begin to discern the profile of my death.’ Nearly 13 years later, the enfant terrible of mid-century American letters, Gore Vidal, wrote another Roman novel, this time about the apostate emperor Julian, the last of the pagan rulers of Rome. Only in Vidal’s Rome, the philosophers and praetors spoke as if they were consultants in Washington DC think-tanks: gossipy, anxious, conspiratorial and yet happily dealmaking. In both these novels, written by writers at the peak of their imaginative prowess, the Romans were reborn in accordance with widely held national understanding of what constitutes political power: for the French, political power is an occasion for intellectualism and pedagogy, while for liberal Americans following the McCarthyite era, politics was a way to keep the wolf of authoritarianism away.

This problem of our own perspectives seeping into the descriptions of the past is even more difficult to avoid when we talk about Indian history as ordinary citizens and readers—a subject that is awe-inspiringly behemoth in size. Since so much is unknown and obscured, Indian history offers ample grounds for an individual’s a priori ideas to smuggle themselves. Noboru Karashima, an influential Japanese historian of south India, writes about the legendary KS Nilakantha Sastri’s ‘excellent’ textbook on south India, ‘As a brahmin, however, his inclination was to emphasize the role of north Indian and Sanskrit culture in the development of south Indian society.’ But lest one dunk on Sastri, Karashima also notes an opposing force that was in play as well which retarded the possibilities of writing a quality history textbook as well: ‘Any writing that the Tamil nationalists did not like, they attacked severely even if its content was academically acceptable.’


The narrative form of Indian history has often been written with an effort to impose a coherent, uniform structure that mimics the diplomatic histories of Europe in the 19th century as well as comports to demarcations of modern political ideologies—from liberalism to Marxism, from fascism to multiculturalism—which brooks no
opposition to their main tenets

To some extent, many of these problems about history can be ameliorated if we train and fund scholars who can work on epigraphical, copper plates and primary texts. But even then, there remain open-ended questions on how to organise evidence into a cogent explanation or model of the past. When faced with a seemingly simple question like ‘what is the history of feudalism’ in India, the answers are not just difficult to parse for an average reader but even among experts there emerge fundamental disagreements. One merely needs to read the debates between DN Jha, Harbans Mukhia, RS Sharma and others in 1980s on whether ‘feudalism’ was a relevant concept for India. The result is that any effort to write a history of ideas and phenomena which have governed Indian lives quickly run aground on the reef of three distinct difficulties.

One, the story of the Indian past has been often told using borrowed narrative styles and interpretive strategies. We have seen this when 19th century European scholars of the Bible began to delve into the philology of Indian texts; in explicit invocations of Marxist concepts to describe Indian society’s functioning with little use for the inner world of Indians; in efforts to psychologise Indian mythology to construct recognisable frameworks; in using anthropological studies done elsewhere to describe Indian institutions. None of this is to suggest India is unique or the Indian past shouldn’t be read from diverse viewpoints—anekantavada or the theory of non-one-sided-ness, as our ancients called it. But the consequences of such grafting of foreign lenses to see ourselves—through academia and elite production of acceptable knowledge—is an internalisation of self-description that rebels against everyday experiences and intuitions of how Indians see the world. What should be a collective aim to discern the many-coloured truths of the past quickly devolves into a litmus test to check for conformance with these internalised descriptions.

The second major hurdle is that the narrative form of Indian history has often been written with an effort to impose a coherent, uniform structure that mimics the diplomatic histories of Europe in the 19th century as well as comports to demarcations of modern political ideologies—from liberalism to Marxism, from fascism to multiculturalism—which brooks no opposition to their main tenets. In contrast, Indian thought and thinkers have often happily borrowed from each other and were often methodologically bound to articulate another’s view with great fidelity. Ever since colonial education took root in India, the Western way of narrating history (Catholicism versus Protestantism, Crusaders versus Islam) which has typically laid a premium on an oppositional nature has become dominant. Thus, we have portrayals of our past as Buddhism versus Hinduism, Upanishads versus Nikayas, Samkhya versus Madhyamaka, ritualism versus atheism, etcetera. On this view, homogenous monoliths battle the other side with an intent to decimate and conquer. The reality of the Indian past and thought is more complex, wherein someone as sacrosanct to Vedanta Hinduism as Sankara could be termed as ‘prachchana bauddha’ (the crypto-Buddhist). A history of Indian thought that takes dialogues, borrowings and contestations seriously is still a rarity.

Third, thanks to the transformation of history into an academic discipline in late 19th century Germany and slowly elsewhere, the need to imbue the Indian past with two characteristics—familiarity and assuredness—has been overwhelming. We need only hear present-day intellectuals and writers opine on the Indian past that one would think all is well understood. The late David Pingree estimated that there are 30 million Indic manuscripts in public and government libraries and in private collections, often gathering dust and unread. The National Mission for Manuscripts in New Delhi is more conservative and estimates seven million. Historian MD Srinivas writes, ‘10 million is indeed a reasonable estimate for the number of Indian manuscripts that are extant.’ It is safe to say that a substantial portion of these manuscripts are untranslated, unannotated and, in most cases, unseen by human eyes for years, if not decades. The reason for providing this brief accounting of manuscripts is to impress upon the fact that when talking about Indian intellectual traditions, we do not even know what we do not know. Arthashastra’s text was discovered in 1905, Swami Vivekananda died in 1902—the idea that a profound student of Indian thought as him died without reading a text that is now widely seen as an anchorsheet of how we describe ancient India should give us all pause. Any historical retelling of the Indian past must, by necessity, be incomplete, contingent in its telling and circumspect in its claims, in its knowledge that 100 years from now, this story could be entirely different thanks to new discoveries in our libraries that lay hidden in plain sight. When writing and speaking about the history of Indian intellectual history, humility is not a virtue, it is a prerequisite. That is the only abiding lesson that time has taught us repeatedly.