Hazrat Inayat Khan moved to Moscow in October 1913 and spent an eventful seven months in the city, attaining celebrity status. He was one of the earliest proponents of Indian culture in Russia 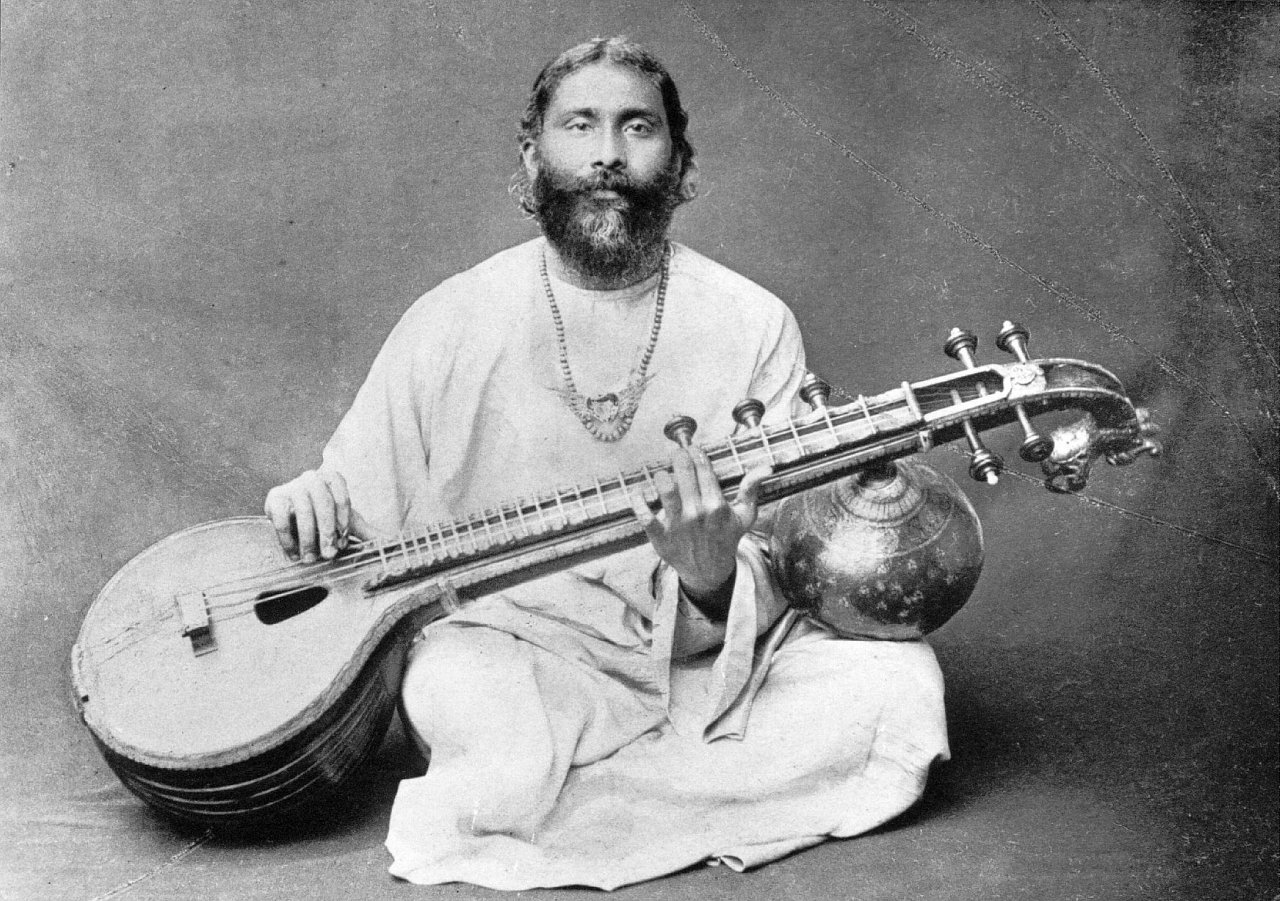 
On a chilly October night in 1913, the eldest son of Leo Tolstoy, Sergey decided to head over to Maxim, a famous cabaret, along with two of his friends-Symbolist poet Vyacheslav Ivanov and opera singer Feodor Chaliapin. As was the case in Paris, Berlin and other great European cities, the cabaret scene was thriving in Moscow in the years leading up to the First World War. The trio would have expected the usual amateur acts poking fun at bourgeoisie society followed by contemporary European music that loud patrons would enjoy over glasses of champagne. It was a pleasant shock that awaited them, however. They watched three Indian men perform Hindustani classical music, and were enchanted by the musicians.

The Indians performing at the cabaret were on a mission to promote the cultural, moral and spiritual values of Sufism. Hazrat Inayat Khan, his brother Maheboob Khan and cousin Mohammed Ali Khan had left the shores of India in 1910 and had lived in the United States and Britain, where they founded the Sufi Order of the West. The Indian Sufis were invited to Moscow by an impresario who thought their exotic music would catch the attention of the intelligentsia of the city.

From Baroda to Moscow

“The prominent position of the Maulabakhshi Khandan brought its members outside the narrower Muslim circle and in close contact with leading Brahmin and Parsi families, a circumstance which strongly influenced Inayat Khan’s intellectual growth and way of thinking,” says Sufi teacher and Hazrat Inayat Khan’s grandson Zia Inayat Khan. This contact ensured that Hazrat Inayat grew up with a deep interest in philosophy, mysticism, Advaita Vedanta and Sufism.

A series of personal losses had a major impact on Inayat Khan. The death of his grandfather in 1892, the passing away of his brother (who was ten years younger than him) in 1900 and his mother two years later, would change the course of his life. In 1902, as a 20-year old, Inayat Khan travelled and performed in Mysore and Madras, where his music was greatly appreciated.

“He returned to Baroda for about one year, during which he published an anthology of his poems in different Indian languages under the title Sayaji Garbavali; but soon it became clear that another scene was needed for his development and his activities,” according to Zia Inayat Khan. “Steeped as he was in the Maulabakhshi music and musical concepts, he felt the urge to carry them to Hyderabad, the principal remaining centre of Moghul tradition and culture at the time.”

Working as a music teacher in Hyderabad, he wrote several musicological works, culminating in the publishing of Minqar-i Musiqar, a work on classical Indian music theory and practice. With this book his grandfather’s musical system was made available to Urdu readers. Inayat Khan would also become close to the Nizam of Hyderabad, and seemed poised to having a life of fame and fortune in India, but he was destined to go on a spiritual path. In 1904 he became a student of Syed Mohammad Hashim Madani, a Pir of the Chistiya Order of Sufis.

Before his death in 1908, Inayat Khan’s teacher told him to move to the West, and use the power of his art to unite East and West. “This somewhat shocked Inayat Khan – after all, he felt comfortable in India, was deeply rooted in its culture, was a court musician of one of the most influential rulers of India, a professor at music academies,” Sergey Moskalev, the editor of Inayat Khan’s books in Russian, said. “And now he had to go to an unknown place in order to unite the West and the East with his art.”

In 1910, Inayat Khan along with younger brother Maheboob Khan and cousin Mohammed Ali Khan moved to San Francisco. Another younger brother of his, Musharraf Khan joined them six months later. While the brothers staged small concerts in the U.S., Inayat Khan dedicated his time to studying the psychology and general conditions in the country. They lived in the country for two years and moved to Britain and then travelled across Europe.

“During their initial years in the United States and Europe they lived on money that was sent to them from India,” according to Moskalev. “It was a kind of asceticism, because they didn’t go to the West to earn money. For some time they wandered around America, then came to England, of which they were citizens. There were always people who were ready to help them organise concerts and lectures.”

It was in Paris that a Russian impresario met them and invited to Moscow.

On that cold October night in 1913, Sergey Tolstoy, who had a deep interest in musical ethnography, approached the impresario and bought out Inayat Khan’s contract. The son of the great writer, who to an extent was influenced by Leo Tolstoy’s spiritual works, felt that such serious music should be showcased in more prestigious venues, and not in a cabaret.

Well connected with the elite of the city, Tolstoy arranged for a concert of Inayat Khan at the Moscow Conservatory. Word about the musicians began to spread across the Russian metropolis, and the group performed a few Hindustani classical music concerts at the Moscow Polytechnic Museum. Inayat Khan also conducted lectures in the city with the help of the Theosophical Society, which was keen to get the Russian elite better acquainted with Indian spiritual traditions.

As interest grew in his music, many luminaries in Moscow were eager to meet him, including composer and pianist Sergei Rachmaninoff. After his interactions with Russian musicians, students and ordinary citizens, Inayat Khan remarked that Russians had a “Western mind, but an Eastern soul.”

Among the celebrities present in the audience for the concerts was pianist and composer Alexander Scriabin, who had developed a special interest in Indian culture and philosophies. He would develop a close friendship with Inayat Khan. The two met to discuss ways to fuse Eastern and Western music. The Russian pianist was familiar with the teachings of Ramakrishna Paramahamsa as well as the Vedas and Upanishads. Scriabin also shared his ambitious and unfulfilled dream of staging a massive concert by the Ganga.

With his growing popularity, Inayat Khan became one of the first proponents of Indian culture and music in Russia.

Objects of curiosity, Inayat Khan and his family were getting both wanted and unwanted attention in Moscow. The Russian Orthodox Church grew suspicious of their motives. “Inayat Khan was not a religious missionary, he was primarily a man of art, musician and poet, but at the same time he always had a mystical outlook,” Moskalev said. However that’s not how the authorities saw it. The Tsarist regime, suspicious of their motives of the unusual Indian visitors to Moscow, entrusted Andrei Balakin from the intelligence service to keep an eye on them. Instead of spying on Inayat Khan, the officer ended up becoming his apprentice and follower. Khan’s first book on Sufism, Sufi Message was published in Russia, and Balakin was the translator.

In his book Essays from the Past, Sergey Tolstoy wrote of his time with Inayat Khan. “The singing was accompanied with the veena- a plucked string instrument that is something between a guitar and a small harp, a bowed instrument, something like a viola and a drum,” Tolstoy wrote, adding that the melodies sounded “monotonous.” Inayat Khan decided to accompany his melodies with European harmony and stage a musical based on Kalidasa’s Shakuntala.

With a help of pianist Vladimir Pol, Tolstoy helped Khan harmonize 17 songs for a musical rendition of Kalidasa’s classic. Although Tolstoy wanted the musical to be staged by the spring of 1914, this did not come to be.

In May 1914, Inayat Khan and his family went to France to showcase Sufism and Hindustani classical music at the World’s Fair in the city of Lyon. A month later Archduke Franz Ferdinand was assassinated by Gavrilo Princip in Sarajevo and the First World War broke out.

Although Russia was a major player in the World War, life seemed to continue in an eerily normal manner for a long time in Moscow. Tolstoy arranged for Shakuntala to be performed twice by the Sokolniki Orchestra, and six months after Inayat Khan left the city the musical found its way to a grander stage.

The story of the daughter of the sage Vishwamitra from the Mahabharata premiered as the first event to be staged at the Chamber Theatre in the heart of Moscow. The theatre, now known as the Pushkin Drama Theatre, opened its doors to the public on December 14, 1914 with Shakuntala. Members of the city’s high society turned up in large numbers to watch the musical starring Russian actors, accompanied by a Russian orchestra.

The Chamber Theatre had to wage a battle with the Russian Orthodox Church to stage the musical, as the clergy from the Church of St. John the Evangelist, which was next door to the theatre, did not want an entertainment venue as a neighbour, let alone one that was planning to showcase something from an “Eastern” religion.

The musical was a massive success and has been regularly staged in different venues across Russia ever since its premiere. It also has a mini-ballet version

Inayat Khan spent a happy six months in Russia, where his daughter and legendary British spy Noor Inayat Khan (also known as Nora Baker) was born. Ameena Begum (Ora Ray Baker), Inayat Khan’s American wife had accompanied him to Moscow. The Khans wanted to return to Moscow from France, but a sequence of events starting with the First World War, the October Revolution and the Russian Civil War and the consolidation of Soviet power ensured that they would never return to the country.

The Sufi maestro continued to correspond with his Russian students till 1921. The Sufi magazine, which was published in London, had subscribers in Moscow. These includes students as well as his friends such as the American dancer Isadora Duncan, Sergey Tolstoy, became was the cultural coordinator of the Sufi Order in the city, and Andrei Balakin. The Soviet authorities, cracking down hard on religion at that time, cut off these connections in 1921, banned the magazine and intercepted any correspondence between Inayat Khan and his students and friends.

Inayat Khan passed away at the age of 45 in Delhi in 1927. Extensive travelling had taken its toll on his body and he passed away due to complications caused by a cold. He remained popular with a niche audience in Russia.

Even before the crackdowns on religion were gradually eased in the Soviet Union, the authorities did not seem to have a particular problem with the staging of Shakuntala. Just around the time the USSR collapsed in 1991, Inayat Khan’s book Sufi Message was republished in Russia and had a print run of 50,000 copies. His legacy and teachings are now promoted in the country by the Russian Foundation for the Study of the Heritage of Hazrat Inayat Khan.