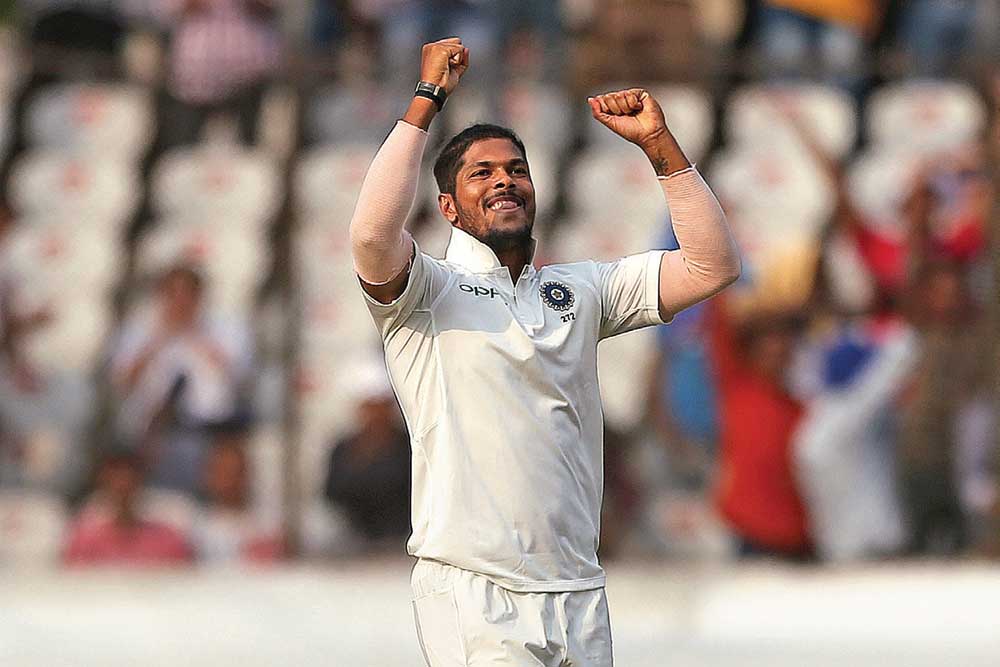 GREAT MYSTERIES SURROUND Umesh Yadav’s career as an international cricketer; mysteries that go beyond the man bun that he currently sports at the top of his head. But that tuft of hair could well be the appropriate starting point to explain the riddles shrouding this unique Indian fast bowler. During the final stages of the second and final Test against the West Indies in Hyderabad, Yadav splattered Shannon Gabriel’s stumps to usher in his finest hour on a cricket field (an hour so fine that it immediately went down as one of the greatest feats achieved by a fast bowler in India) and he stopped by the pitch for a celebration worthy of the occasion. This is what occurred next.

Ravichandran Ashwin, who had made his Test debut alongside Yadav against the same opposition seven years ago, walked up to the hero of the hour and undid the man bun, holding aloft long locks of uncaged hair in his fist. The players surrounding them laughed and waited in anticipation for something more to happen. Nothing did. But Ashwin isn’t one to give up. After a moment or so had passed, he untied Yadav’s hair again—this time hoping for it to disobey gravity. It didn’t. So Yadav wore his cap, held the ball he achieved his milestone with up in the air, and led the team off the cricket field.

Quite like the bun, no one—fan or selector—really knows what to make of Umesh Yadav. He’s just there, waiting for his turn to make something happen. Waiting for his turn to disobey gravity. But more often than not, nothing happens. When he first burst on to the scene in his early 20s, the Indian team had reason to believe that they had unearthed the prototype fast bowler, a man who could excel in each of the key components of fast bowling. Speed, bounce, seam and swing. But with the passage of time, India found pacers with specific skillsets and soon there was at least one fast bowler who excelled over Yadav in each of those key areas. Want speed? Turn to Jasprit Bumrah. Want bounce? Ishant Sharma is your man. How about masters of seam and swing? Look no further than Bhuvneshwar Kumar and Mohammad Shami.

Just like that, Yadav was relegated to the role of a fifth wheel in India’s first genuine pace juggernaut. By the end of 2017, he had lost out on his starting spot in the one-day team. And by 2018, the 30-year-old from Nagpur wasn’t considered able enough to be India’s supporting seamer in Test cricket.

This year was earmarked to be a cornerstone season for the Indian team given Virat Kohli’s side, the number one ranked Test nation in the world, was going to defend its status in South Africa, England and Australia—countries that hadn’t been visited for a Test series since 2015 and countries where previous Indian sides had won a combined total of two Tests (in 22 attempts) since 2010. Yadav began this campaign serving drinks in Cape Town as the Indian team management preferred to experiment with a rookie in debutant Bumrah instead. This must have felt all too familiar for Yadav. Back in 2010, in the same city no less, Yadav had announced his arrival by felling Sachin Tendulkar—then at the peak of his powers—with a bouncer at a preparatory camp. Yet, when it was time for the first Test in Centurion, Jaydev Unadkat and not Yadav was handed his maiden cap and Yadav had to wait an entire year before he was given his due.

By the end of the three-match Test series in South Africa this year, every member of the 18-man Indian squad was given a chance (including the two reserve wicketkeepers in Parthiv Patel and Dinesh Karthik) except Umeshkumar Tilak Yadav. He perhaps wouldn’t have gotten a go in England if not for the sensational season he recorded in the Indian Premier League. More importantly, Yadav scalped those 20 IPL wickets (fourth best in the season’s list) for Royal Challengers Bangalore, a franchise led by the national captain. Kohli promptly chalked in Yadav’s name for the opening Test of the England tour in Birmingham and Yadav’s lukewarm performance ensured he wasn’t picked again for the remainder of the five-Test match series. So, in the eight away Tests this year, all played in conditions most suited for a fast bowler, Yadav, Kohli’s go-to pacer not too long ago, featured just once.

“It is difficult,” Yadav told ESPNcricinfo in an interview after the team had returned home from England, when asked about what it felt like spending a lot more time watching the game than playing it. “You are sitting for five days, trying to read the game from outside… nobody likes to sit out. Sometimes you feel like, ‘I would have got wickets if I was playing.’ Sitting outside is more tiring than playing. So yes, it was disappointing for me that I got to play only one of the last eight away Tests, but there’s nothing to be gained from harping on it. Now I need to focus on how to do better if I get a match, so that I get more chances in the future.”

When Yadav got his chance, it was in the two Test matches at home against the West Indies—a series so inconsequential that it was considered an opportune time for the Indian team management to rest all their regular fast bowlers before the upcoming tour of Australia. Jasprit Bumrah, Ishant Sharma and Bhuvneshwar Kumar sat at home. Mohammed Shami sat on the bench for the second Test in Hyderabad. To make heads turn in such pointless circumstances, Yadav needed to pull off something out of the ordinary, something on the scale of disobeying gravity. So, he—a man who is always waiting for his turn, always waiting for someone to expect something of him—did.

TEST CRICKET HAD been played 266 times over 85 years in India, prior to the Hyderabad Test. In that space and time, only two Indian fast bowlers could boast of ever having taken a match-haul of 10 wickets: Kapil Dev and Javagal Srinath—a stat that should tell you just how unforgiving Indian pitches and conditions are for the egos of fast bowlers. Umesh Yadav, of all the quicks in this era of glut, would enrol in this exclusive club. It was, as the cricket writer Bharat Sundaresan described it, ‘the bowling equivalent of a triple-century in trying conditions, even if you discount the opponents’.

The incredible odds stacked against Yadav coming anywhere close to this achievement—that of taking half of all West Indies wickets to fall over two innings—amplified significantly when the other opening bowler in this game, debutant Shardul Thakur, hobbled off the field with a strain within the first few minutes of the Test. Now, Yadav was burdened with twice the workload on an unfavourable wicket with an unfavourable ball that constantly went soft (a fast bowler’s nightmare) and had to be changed. And to make matters just a little more impossible for a stellar Yadav performance, India were playing their three premier spinners in Ashwin, Ravindra Jadeja and Kuldeep Yadav; spinners who were used to swallowing entire batting line-ups in these conditions.

So Yadav did what he always does and doesn’t always get credit for. He put his head down, bent his back and ran in hard every ball, every over, all day long. Four out of the first five wickets fell, expectedly, to the spinners. But the other, a promising innings by Shai Hope (36 runs), was snuffed out by Yadav, who was getting the ball to tail in late to the right-hander even before the ball was old enough to reverse. By the end of the first day, he had put out two more fires in Jason Holder (52) and Shane Dowrich (30). Already, it was a spell to cherish. But the big records would start tumbling on the following day.

On Day Two, Yadav cleaned up the remaining three West Indies wickets with the second new ball. When he bowled Roston Chase for 106, Yadav had accounted for the top-four run-getters in the innings, finishing with innings figures of 6/88. It was the first time an Indian fast bowler had taken six wickets in an innings in India since Srinath in 1999. “I didn’t want to get negative once I knew Shardul wasn’t going to bowl,” Yadav said at the presser that evening. “So, as much as you discuss and deliberate, if I have to bowl, then I have to bowl. So my thought process was if the team asks me to bowl then I am ready.”

Ready, he sure was. Yadav dismissed opener Kraigg Brathwaite with the second ball of the second innings, and when he sent back Chase and Dowrich off consecutive balls, he found himself on a hat-trick for the second time in the same match. Both hat-tricks were missed and the hungry spinners ensured he didn’t claim two five-fors in the same match either; but his 4/45 in this essay gave him match figures of 10/133 and every other positive gained by the Indian team in this series (Prithvi Shaw, Rishabh Pant, etcetera) became mere footnotes.

While a performance of such ferocity would’ve assured any other fast bowler a spot in the starting eleven for the Test series in Australia this December, Yadav knows better than to hope. Once the match ended, coach Ravi Shastri said Yadav had now given him a selection “headache, but a good headache to have” and Kohli called Yadav’s presence in the pace battery a “problem of plenty”. This, then, is the best insight into the mystery that is Yadav’s world, where being called a problem and a headache is more than just a compliment. They are badges of honour.