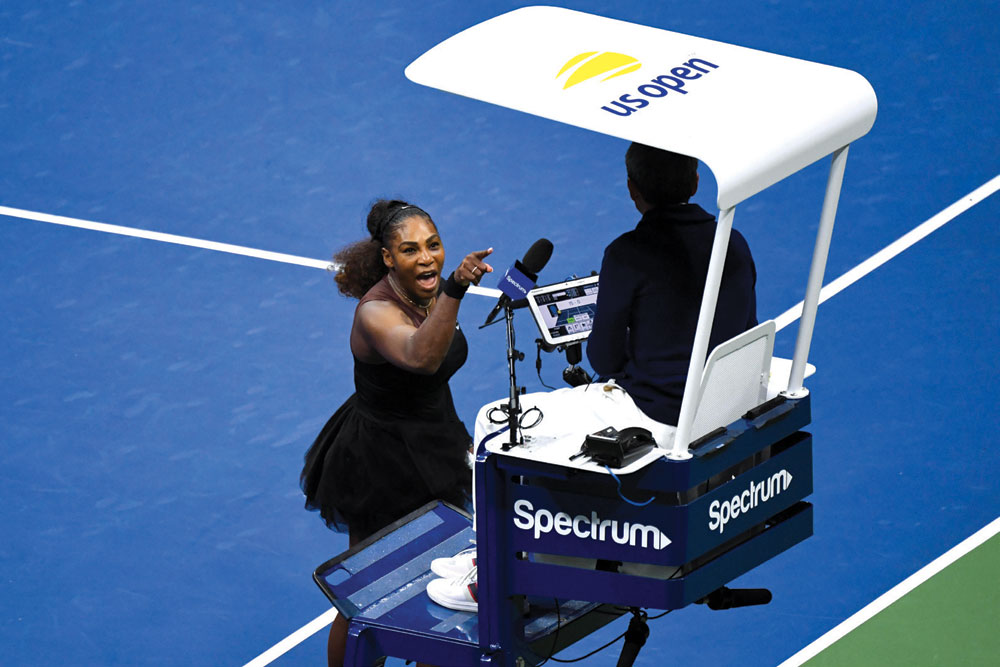 NAOMI OSAKA ALWAYS wanted to be like Serena Williams. Just two years before Williams won her first Grand Slam, Osaka was born to a Japanese mother and Haitian father in a Japan where people like her were mocked for being hāfu—the Japanese word for biracial. Williams was first her distraction from the real world; and later, her inspiration into it. For a tennis hero, Osaka couldn’t have chosen anyone better than Williams, who soon became (and perhaps shall forever remain) the greatest female tennis player this sport has seen; whose terrific all-court game—maximised to its full potential with hard work, belief and perseverance—has become the benchmark for Osaka’s generation.

But for a role model, 20-year-old Osaka would do well to look beyond her childhood hero. She would’ve perhaps realised this on the night where she should’ve rejoiced reaching, winning and beating Williams in her first ever Grand Slam final but instead found three dreams turn into one overwhelming nightmare as 23,000 booing voices traumatised her finest hour, causing her to weep sad tears into her cap at the trophy presentation and apologise profusely for being a champion, all of which was caused by Williams’ detestable actions on court.

Serena Williams would like us to believe that in the 2018 US Open final she was penalised (first a point and later a game) not for her behaviour but rather on the basis of her gender. She said so herself. “It’s because I am a woman, and that’s not right,” Williams complained to the tournament directors she had summoned on court after the chair umpire, Carlos Ramos, a man from Portugal, had docked her a game for verbal abuse. “This happens to me at this tournament every single year and that is not fair.” One of those two statements indeed contains a partial fact. And that statement is not the first one.

In the 2009 US Open semi-final and serving at match-point down against Belgium’s Kim Clijsters— who, like Serena today, was trying to work her way back to the top after childbirth—Williams was charged with a foot-fault by a lines official. “I will fucking take this ball and shove it down your fucking throat,” Williams screamed, towering over the official, who, just like Williams, happened to be a woman. She was docked a point and Williams’ match, and her run at that US Open, ended. But not her transgressions.

Two years later, in 2011, in the final of the US Open against Australia’s Samantha Stosur, Williams was again reprimanded a point by the chair umpire, this time for distracting the opponent mid-play. “You ever see me walking down the hall, look the other way,” Williams threatened the chair umpire, Eva Asdekraki from Greece; a woman in case you missed it, just like Serena. Williams added: “You’re a hater and you’re unattractive inside. Wow, what a loser.” When Asderaki tried to respond, Williams cut her off: “You give a code violation because I expressed who I am? We’re in America the last time I checked.”

Asderaki, showing great composure, made another attempt to reason with her before the end of the changeover, but Williams wasn’t interested. “Don’t look at me. I promise you don’t look at me,” Williams hissed, and on noticing Asderaki was still trying to reach out, her tone turned vicious. “Don’t. Look. My. Way.” So much for ‘this is America’ and ‘freedom of expression’.

Back in the day, in 2011, Williams’ obnoxious behaviour was at least called out for what it was. On air, the female commentator (presumably Mary Carillo), said: “I can’t believe she’s turning it around and making herself seem like the victim.” But today, in 2018, with Williams’ larger-than-life image so intricately entwined with great societal causes such as sexism and racism, and Williams not shy of using either of those cards on a whim, Ramos—the White man disciplining a Black woman’s tantrums—of course didn’t stand a chance. A cube of ice in a furnace.

However one chooses to look at what happened, on whichever side of the debate one lies, on all three occasions Serena Williams’ run-ins with the chair have occurred after losing the first set. This, simply put, is fact

Quite like in 2011 with Asderaki, Williams was in no mood for a dialogue with Ramos during a changeover on September 8th, shortly after her first code violation (warning for on-court coaching plus a smashed racquet) that cost her a point. She spent that time in a one-way conversation with the umpire. “I never got coaching and you’re attacking my character, yes you are. You owe me an apology,” she screamed. Ramos stayed quiet, but Williams went on. “You will never, ever, ever be on another court of mine as long as you live. You are the liar. When are you going to give me my apology? You owe me an apology. Say it, say you’re sorry.”

Ramos would’ve been well within the rules to further penalise Williams (with a game) for her language. He didn’t. But neither did he apologise, and rightly so. So, Williams continued. “Then don’t talk to me, don’t talk to me. How dare you insinuate I was cheating.” And just as she was about to get up to resume play, she wagged her finger at the umpire and said: “You stole a point from me. You’re a thief too.”

Patience snapped with the proverbial last straw, Ramos docked her a game and Williams promptly ensured that everyone got to hear that she was being vilified for saying “a simple thing, a thief.” Not for the rest of her tirade, which included threatening to use her power to jettison an official’s career.

“Are you kidding me? Because I said thief?” she told Ramos. “To lose a game for saying that is not fair. Do you know how many men do things that are much worse than that?” she told the tournament directors. “I’m here fighting for women’s rights and for women’s equality and for all kinds of stuff. For me to say ‘thief’, and for him to take a game, it made me feel like it was a sexist remark. He’s never taken a game from a man because they said ‘thief’,” she said in the press conference later.

Apart from claiming to be the victim, there is only one other commonality in the three US Open matches that have ended unceremoniously for Williams in the last decade. Just like against Clijsters in 2009 and Stosur in 2011, Williams was well on the verge of defeat against Osaka before being sanctioned for misconduct by the umpire. And however one chooses to look at what happened, on whichever side of the debate one lies, on all three occasions Williams’ run-ins with the chair have occurred after losing the first set. This, simply put, is fact.

Ramos, a gold-badge umpire (he has officiated all four Grand Slam finals and the Olympics gold-medal match) is a known stickler for the rules. And not just in women’s matches. Ramos handed Andy Murray a code violation at the Rio Olympics. Rafael Nadal received two warnings for time violations from him during the 2017 French Open. And Novak Djokovic was given a warning for breaking his racquet at Wimbledon this year. They, all top players with as much to lose as Williams, simply found a way to deal with it. So when Ramos caught Williams’ coach Patrick Mouratoglou giving instructions between points (which he admitted to doing immediately after the match) and warned Williams of her coach doing so, he was simply playing by the book, however archaic the rules within that book are.

“I don’t cheat to win, I’d rather lose. I’m just letting you know that,” Williams told Ramos on getting the warning, directly below the nodding umpire. Point made, point taken. Had she stopped there, the tennis-watching world would’ve now been discussing the likely scenario of Osaka’s memorable maiden Slam title or even, perhaps, Williams’ incredible turnaround victory—her record-tying 24th Slam. Instead, some 30 minutes after she first interacted with Ramos, the night ended with the chair umpire being escorted out of the court like a fugitive before the trophy ceremony, and Osaka looking rather frightened during it.