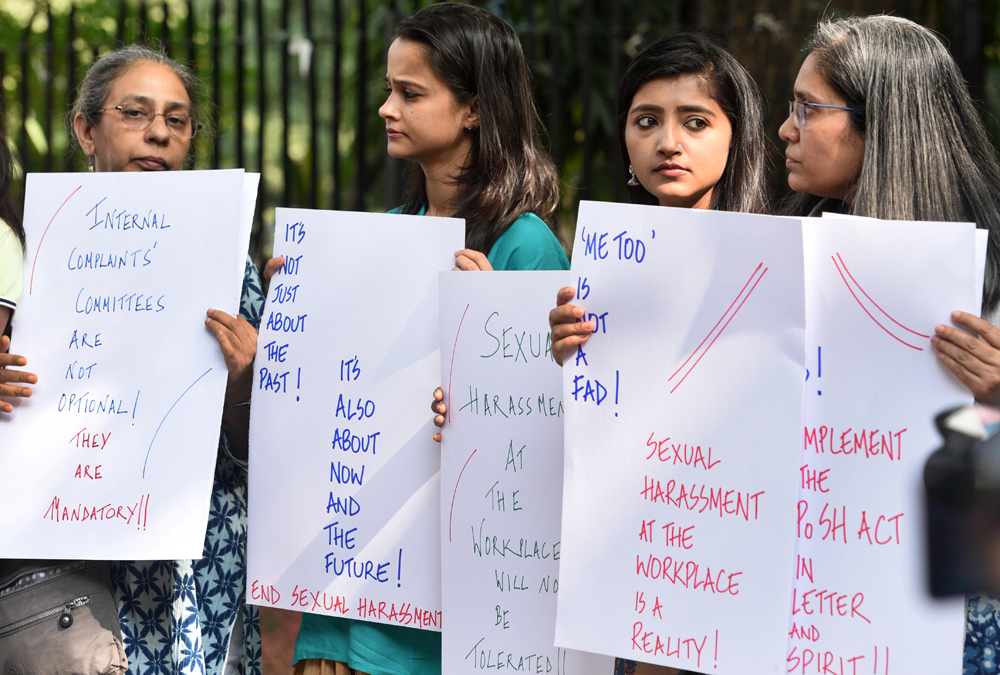 NEW DELHI, INDIA - OCTOBER 13: Electronic and Print media journalists stand to protest against the sexual harassment at the workplaces as part of the #MeToo campaign at Parliament Street, on October 13, 2018 in New Delhi, India. The protesting journalists also sought immediate action against those facing allegations of sexual misconduct. (Photo by Mohd Zakir/Hindustan Times via Getty Images)


Late last year, the #MeToo India moment created a much-needed jolt over gender justice, sexual harassment, power abuse and workplace redressal systems. Now, many months after, it’s hard to imagine all that happened in the white heat of October-November 2018. There has been a slow subsiding of the movement since. One of the reasons for that, has been due to #MeToo India’s telling silences and blind spots. The latter happened as only a set of people, mainly feminists, set the agenda for the #MeToo conversation. There was much-required reporting and augmenting of the voices of victims. But the investigation into the making of the harasser, had to go further. Thus, the skewed analyses led to an important, but limiting, public discourse. Due to that, many germane queries went unasked or if some were brought up, they went half explained. One such, was the idea of sex as a form of power and the relationship between sex and power. 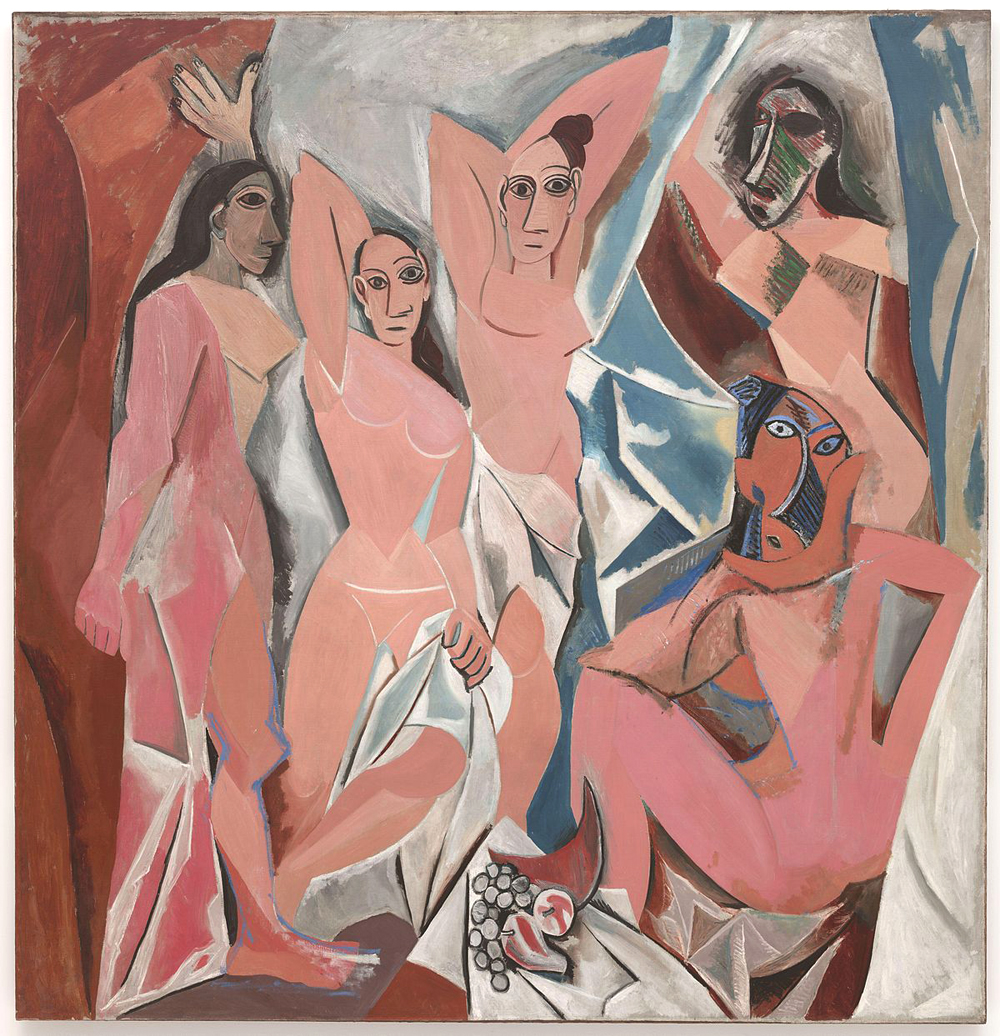 The last has been one of the vexing queries to emerge in the post #MeToo churn and one without any easy answer. For this to be understood, one needed to reflect on how harassers became who they are. An obvious answer may lie in the gendered ordering of most societies, where power is distributed unevenly between women and men through the family-marriage-community web. The latter organises sexual intimacy as a ritual of social norms. And social norms tighten the interlinking of power with sex.

In essence, love, lust, sex and romance may seem natural triggers and responses to a human being’s emotional and physical needs. But, more importantly, they are also expressions of human freedom and imagination. Due to this, these ideas have the ability to disrupt social orthodoxy. To stop this from happening, meanings like power are assigned to sex by society’s overlords. Attaching such meaning to sex, as a form of power, makes the idea of sex, sexual intimacy and sexual freedom more tractable. In the process, sex becomes a form of power that can be controlled. In the first volume of his History of Sexuality, French thinker Michel Foucault elucidates many of these concerns. He tries to comprehend how the discourse in Western Europe around sex over the last 400 years became mediated through the institution of matrimony. All sex discourse came out of marriage discourse. Underplaying the pleasure element of sex, it became routinised as the social function of marriage. Due to this, Foucault felt society became “repressed”. Sex became an expression of power and may have led to its abuse.

Since sexual freedom can disrupt social convention, most human communities have wanted to put in norms to regulate and mediate sexual relations through systems as matrimony. Adding such provisos for women and men who are already internally unequal, recasts sex between them into a struggle for power. Thus, individuals are made to organically view sex through the prism of power.

Therefore, how does one smash this sex-as-power grid of thought? How does one break this matrix of ideas and emotion that may operate at the level of the subconscious mind?

She writes, ‘As women, we have come to distrust that power which rises from our deepest and nonrational knowledge. We have been warned against it all our lives by the male world, which values this depth of feeling enough to keep women around in order to exercise it in the service of men, but which fears this same depth too much to examine the possibilities of it within themselves. So women are maintained at a distant/inferior position to be psychically milked, much the same way ants maintain colonies of aphids to provide a life-giving substance for their masters.’

SUBTRACTING POWER from received notions of sex is a long-running motif in subcontinental traditions. Think of some subaltern versions of the epics, the Bhakti movement, some of the graphic depictions of almost democratic sexuality in the carvings of Khajuraho and Konark, and you see an environment where sex wasn’t necessarily understood as power negotiation. Many of these instances, certainly the Bhakti movement, posed many-sided challenges to orthodoxy. It’s incredible how often sex-as-power defined those conflicts. The twelfth century Kannada poet Akka Mahadevi rebelled against her ethos, broke her marriage and wandered the world naked composing vachanas. She demystified the naked female body—the source of power and skirmish.

In Mahasweta Devi’s writing about the tribes of what is now present-day Jharkhand, she hailed the gender and sexual equality prevalent in their cultures and contrasted them with the orthodoxy of upper castes in urban India. For instance, the adivasis had a culture of being open minded about divorce. That is, it seems it’s not impossible to separate power from sex.

In his controversial work on the sexual culture of America until the late twentieth century, Gay Talese’s Thy Neighbour’s Wife, went where not many journalists had ventured till then. Published in 1980, Talese dove into America’s abiding sexual trends and history. Its one-time draconian obscenity laws, the rise of Hugh Hefner and Playboy, the pornographic film industry, urban America’s massage parlours, a famous couple-swapping nude commune in California, a quasi-religious polyamorous sect in upstate nineteenth-century New York, were some of the compelling elements that formed parts of the story of sex in America.

Here, he reported and participated in the experiments conducted at the Sandstone Foundation for Community Systems Research in California, where retreaters switched partners, but equally importantly, worked as a community, with an undergirding philosophy of building sexual and gender equality. Under the direction of founders John and Barbara Williamson, many couples aimed to overcome their “ownership problems” over each other and learned to express and act on their eroticism without resorting to deceit and hypocrisy and worked on eliminating possessiveness and jealousy.

‘When you don’t have to lie about sex,’ said John Williamson in the book, ‘you don’t have to lie about anything’. Over the course of daily discussion and wide reading on psychology, anthropology, sex studies, sociology, history, literature while working on the upkeep of the estate, sharing and caring over chores, residents helped create an ethos of collective equity, pleasure, responsibility and care. Essentially, they were aiming to divorce sex from narrow notions of power that habituated American matrimony.

Talese even wrote about an earlier and more infamous experiment on building sexual parity. It was about the mid-nineteenth century commune in upstate New York called Oneida. John Humphrey Noyes, an American theologian and preacher, dissented against orthodox Christians to reinstate physical desire and take it away from notions of guilt and sin.

Judiciously arguing for a love of God and Christ that was not incompatible with amatory desirousness, and invoking pre-medieval Christian traditions that were more relaxed about pleasure, sin and guilt, Noyes created two radical ideas aimed in different ways at divorcing notions of ‘power’ from sex: Christian perfectionism and “complex marriage”. The former advocated that it was possible and amenable to be religiously faithful while pursuing pleasure intuitively and the latter, consensual free love.

At Oneida too, people raised families together. In many cases, community members practiced free, safe and consensual sex without the widespread orthodox Christian norm of engaging in sex to only produce children. But children that were born here were reared as equals. No child had exclusive rights over toys. If parents became overly possessive of their biological children, they were reprimanded by Oneida overlords. All adults were parents to all children. Women had the right and were often encouraged to seek intimacy from male members they liked. Gender and sexual equity anchored Oneida’s values and like the later Sandstone, it had an underpinning vision, a socioeconomic structure. Members were full-time employees who managed the estate and created goods like the well-known Oneida animal trap, making it a profitable Christian enterprise that also encouraged free love.

Both Sandstone and Oneida had moments of peak popularity and greater infamy. Noyes’s run-ins with the New York state police and the regular allegations of “promoting adultery” and the many plots and schemes to defame and trap him, made him flee to Canada. Noyes behaved like a dictator at Oneida and was accused of consummating with underage girl, thus marring Oneida’s growing reputation. A decade from starting, Sandstone ran into financial problems and shut down in the mid-1970s.

However, both these and the number of earlier instances point to human innovation and creativity in being able to lead sexually fulfilling lives. They aimed to break through the sex-as-power equation. Excepting personal accusations against Noyes, it’s extraordinary how both almost never had cases of sexual harassment or violence, simply because humans were made to exercise their sexual freedom with responsibility and were made to think and act on sex and marriage differently. And at least in one case, this happened while invoking the resources of a cultural and religious tradition.

One reckons the emotional and intellectual challenge for twenty-first century post-#MeToo human beings, will be in building a conversation where sex is stripped off connotations of power. And this can only happen if humans address the philosophical roots of their desires for sex and power. Sandstone and Oneida were just two attempts towards that end, and both were problematic. There are several others in the human past.

Post-#MeToo human beings will need a radical openness in talking about and thinking through sex. Can they manage being “traditional” while remaining open to sexual freedom and equality? Can they build a dialogue around repressive institutions like matrimony to open its windows to new equalising influences? We must understand that the harasser may be coming from a place of repression as much as a will to abuse power. For to stall sexual harassment at its origins, we must find ways of stopping human beings from seeing sex as a form of power over another human.