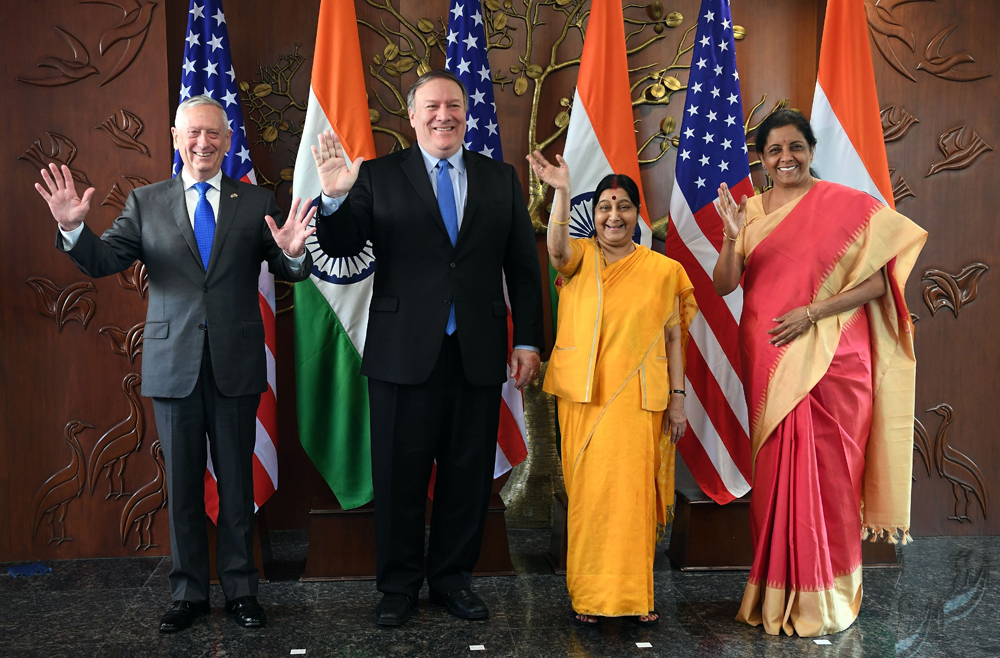 A nation can lose its sovereignty, defined as the ability independently to make decisions in its own interest, in a rush or incrementally. The signing of the Communications Compatibility and Security Agreement with the United States this past week is the latest such increment in a series that began with the Jaswant Singh-Strobe Talbott ‘strategic dialogue’ and Next Steps in Strategic Partnership under the previous Atal Bihari Vajpayee-led Bharatiya Janata Party government that prevented India from developing a genuine 12,000 mile intercontinental ballistic missile, and the 2008 civilian nuclear cooperation deal negotiated by the Congress party regime of Manmohan Singh which with ‘voluntary test moratorium’ as the basic predicate, capped the Indian nuclear weapons capability at the boosted-fission level and well short of the tested and proven high-yield two-stage thermonuclear armament—the ultimate adjudicator of differences between countries.

The BJP Government has done its bit in eroding India’s sovereignty by signing in 2016 the Logistics Exchange Memorandum of Agreement that will permit America to stage military operations from India air, naval, and army bases in the Indian Ocean region, and by following up last week in the ‘2+2 Talks’ with the Communications Compatibility and Security Agreement (COMCASA)—that will leave no part of the country’s most secret communications grid within the Government and the military unexposed to US control. The 2+2 Meet involving the foreign and defence ministers of the two countries—Sushma Swaraj and Nirmala Sitharaman clearly overmatched by Mike Pompeo and General James Mattis.

Thus, in a span of 18 years, India has lost its sovereign policy space, wrecked its pretence of strategic autonomy, and consolidated its growing status as a comprehensive security dependency of America. Hardly to be wondered then that India has garnered the status of a treaty ally of the US in Asia akin to Japan, South Korea and Philippines. Ironically, it is at a time when European states, fed up with the record of American unreliability and arm-twisting, are planning a NATO of their own minus the United States. That the so-called ‘nationalist’ BJP and the more ‘internationalist’ opposition Congress party are equally responsible for bringing this country to this pass, tells its own sad story.

But why is COMCASA significant? It will allow the US to comprehensively penetrate the secure Indian communications network, including all command and control links not excluding the Strategic Forces Command (SFC). It means that with the US listening in on the most secret communications traffic within the Government and between the Indian Government and other governments, it can take measures to pre-empt decisions and shape policies to ensure Delhi doesn’t depart from the US line. It will also be in a position to hinder military communications between senior field commanders and frontline units, between theatre commands and Services Headquarters and the Indian Government, and between the Prime Minister and the SFC in a nuclear crisis and, potentially, to over-ride the authority to fire nuclear weapons.

This potentially fatal vulnerability was the reason the Indian military initially opposed COMCASA. But when have the armed services really mattered or even really been in the national security decision loop? Washington has always banked on the malleability of the Indian Government and its functionaries to get its way. This owes not little to the eco-system that’s in place in Delhi to promote and progress the US tilt in India’s stance, led by the Indian chapters of Washington thinktanks peopled by senior Indian diplomats and the like—Brookings and Carnegie funded, incidentally, by Indian corporates. The eco-system, more tellingly, works because of serving senior Indian civil servants and military officers suborned, in the main, by offers of ‘green cards’, work visas, and ‘scholarships’ for their progeny. It constitutes the new set of inducements to sell the national interest down the drain; secret offshore bank accounts are passé. (The entire eco-system is detailed in a section in my new book that’s just out—Staggering Forward: Narendra Modi and India’s Global Ambition.)

The provisions in COMCASA prohibiting Washington from doing any of the bad things, including the sharing of information and data with adversary states, are but paper assurances reflecting the credulity of the Prime Minister and the Ministry of External Affairs. In reality, however, there is absolutely no enforceable guarantee that Washington won’t violate them. Worse, with the P-8Is, and antique platforms, like F-16s and the Sea Guardian drone that Delhi is being pressed to buy fitted with communications gear linked to a ‘blinking’ US Global Positioning System and, more generally, to all platforms and guided ordnance in Indian employ, the entire Indian arsenal will be exposed to technical misdirection. The second test of the Agni missile in the 1990s had to be aborted, for instance, because the US GPS it was plugged into blinked. India cannot prevent such mischief because it lacks the technical means to monitor and shut down COMCASA misuse.

For giving up so much, what has India got in return? It has lost its policy latitude and freedom. The waiver from sanctions for the Indian buy of the Russian S-400 air defence system under the Countering America’s Adversaries Through Sanctions Act as Washington has made clear is only a one-off thing, not a blanket waiver. In other words, CAATSA sanctions are, in effect, a cocked pistol held to India’s head. It is a sign of things to come that the day this accord was signed Trump threatened India with denial of trade concessions, and the departing Pompeo advised Delhi to meet the November 3rd deadline for the cutoff of Iranian oil flow to India, lest CAATSA sanctions get activated.

India would have been strategically empowered had a deal been negotiated to string the US along by approving contingent hookups by Indian forces utilising the jerry-rigged-system facilitating short-term interoperability of the kind that has enabled the Malabar naval exercises, and case-by-case access to Indian military facilities, to match the CAATSA waiver mode. That way India would have furthered the principle of strict reciprocity and retained its own counter-leverage and leeway, and high-level cooperation with Russia and Iran. With a fairly integrated Indian military communications network, however, Moscow will be fearful of the US’ reach into America-sourced aircraft compromising Russian-supplied Su-30MKI fighter planes in the IAF, and especially the Akula-II class nuclear-powered attack submarine with the Indian Navy. Small wonder the talks for leasing the second Akula are stuck. Does Modi expect the US to make up for this critical capability void? Remember, US companies are not willing to part with the upgraded avionics technology of even the 50 year-old F-16 fighter plane! And, even more, how does Delhi propose to manage the evolving Russia-China-Pakistan concert that Moscow has begun giving substance to with the first batch of Pakistan military officers heading for stints at the higher military training institutions in Russia, when it has failed miserably to handle the lesser Pakistan-China nexus?

The Modi Government’s apparently unconditional admiration for America has imposed a low ceiling on India’s ambition. Preventing the erosion of India’s sovereignty, national interest and security are the Indian people’s concerns.