Why pass a new law unless we are clear about its objective? 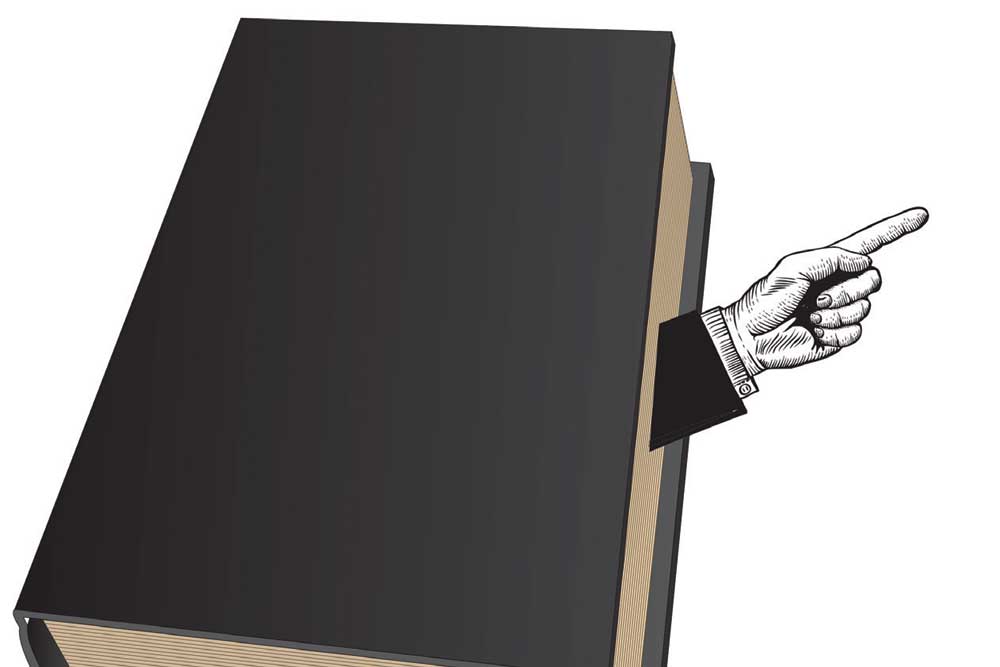 WHY DOES THE LEGISLATURE pass a statute? In addition, why do governments use executive powers to pass orders and regulations, also part of the ‘law’ in a broader sense? All laws are meant to mould human behaviour, by prohibiting certain activities, or encouraging others. Should there be a law to prevent people from picking their noses in public? Most people will not pick their noses in public, despite there being no law against it. Let’s now leave the ‘in public’ bit out. Should there be a law to stop people from picking their noses anywhere outside their own toilets? Should it be illegal to do this, say, in their living rooms? There are several books, sites and articles describing crazy laws in various countries. The trouble with these is that you are never quite sure whether what has been stated is true. For instance, evidently, in Arkansas, men are not allowed to beat their wives more than once a month. Why was such a law passed? What were legislators thinking of? Closer home, think of Section 377 of Indian Penal Code (IPC): ‘Whoever voluntarily has carnal intercourse against the order of nature with any man, woman or animal shall be punished with imprisonment for life, or with imprisonment of either description for a term which may extend to ten years, and shall also be liable to fine.’

I am not about to discuss the pros and cons of repealing Section 377. That’s not the intention. Why should legislators get into what is a private activity? As most people probably know, the IPC in 1861 mirrored Offences against the Person Act (1861) of the UK. Before that, the UK had its Buggery Act of 1533, with a death sentence for the crime. In addition, if you were convicted, you not only lost your life, but also your possessions; the next of kin didn’t get them. They were seized by the crown. There is evidence to suggest that in 1533 Henry VIII wasn’t interested in the prevention of buggery. He was interested in people’s possessions, primarily land. The legislation was used to execute monks and nuns and seize monastery land. The objective was different from what one assumes. There is a lot of literature on the philosophy of law. When economists look at law, they use a lens slightly different from that used by lawyers, jurists and judges. The focus becomes one of efficient decision-making. There is quite a bit of such literature on law and economics: by Gary Becker, Richard Posner and Ronald Coase, among others. The thrust of their argument is simple: let’s not pass a statute, or order, because I feel like solving the problems of the world through legislation and because I, in my role as a legislator, feel I have the power to do so. I have to establish a case for enacting the statute or order. What are its benefits? What are the costs if one doesn’t pass it? Are there any costs associated with enforcing it? As in many other areas of decision-making, we must undertake a complete cost-benefit exercise before enactment with some degree of precision.

You might think I am talking about judicial impact assessment, but not entirely. In 2008, there was the report of a Task Force on Judicial Impact Assessment. This was chaired by Justice M Jagannadha Rao. Let me quote from this report (it actually quotes from an earlier report by Justice Rao and that is what I am also quoting): ‘Further, there must be ‘judicial impact assessment’, as done in the United States, whenever any legislation is introduced either in Parliament or in the State Legislatures. The financial memorandum attached to each Bill must estimate not only the budgetary requirement of other staff but also the budgetary requirement for meeting the expenses of the additional cases that may arise out of the new Bill when it is passed by the legislature. The said budget must mention the number of civil and criminal cases likely to be generated by the new Act, how many courts are necessary, how many judges and staff are necessary and what is the infrastructure necessary.’ Fair enough, but what I am suggesting is broader than that. It’s more like Statute Impact Assessment. In addition, there is some discussion on Regulatory Impact Assessment, an evaluation of what regulators do. What I am talking about is not quite that either.

You will legitimately argue that the Statement of Objects and Reasons accompanying the Bill does precisely that. The Right to Fair Compensation and Transparency in Land Acquisition, Rehabilitation and Resettlement Act was passed in 2013 and is a major piece of legislation. This was preceded by the Land Acquisition, Rehabilitation and Resettlement Bill of 2011. The Statement of Objects and Reasons said, ‘A Bill to ensure a humane, participatory, informed consultative and transparent process for land acquisition for industrialization, development of essential infrastructural facilities and urbanization with the least disturbance to the owners of the land and other affected families and provide just and fair compensation to the affected families whose land has been acquired or proposed to be acquired or are affected by such acquisition and make adequate provisions for such affected persons for their rehabilitation and resettlement thereof, and for ensuring that the cumulative outcome of compulsory acquisition should be that affected persons become partners in development leading to an improvement in their post- acquisition social and economic status and for matters connected therewith or incidental thereto.’ A lot of flowery language. But from that 116-word long quote, do you get any sense of precision? Alternatively, for the National Food Security Act of 2013: ‘A Bill to provide for food and nutritional security, in human life cycle approach, by ensuring access to adequate quantity of quality food at affordable prices, for people to live a life with dignity and for matters connected therewith or incidental thereto.’ Why do I need this statute? What happens if I don’t have this statute? This sentence has only 42 words. But it doesn’t answer these questions. More importantly, it doesn’t feel the need to ask these questions.

I have talked about old statutes in an earlier column. In this column, I am focusing on new ones. Why pass a new statute unless we are clear about its objective? Let me make three additional points. First, in many parts of the world, there has been a plain English movement. Simple, short and unambiguous sentences, shorn of unnecessary jargon and Latin expressions. (Note that ambiguity in language contributes to litigation and statutes also have to be translated into languages other than English.) A Plain English template would shudder at 116 words in a sentence. Second, a statute is not amended every day, unlike a rule, order or regulation. The former is legislative, the latter is executive. The former has to be passed by the legislature, the latter is only placed (for information) before it. Logically, only that part which will last for some time belongs in a statute. The statute then provides the enabling framework for passing rules, orders and regulations. Yet, in statute after statute, there is a temptation to bung everything into it, and we have to wait for amendments/repeals to wind their way through legislature. A statute should be no more than skeletal; let the rules, orders and regulations provide the flesh and blood. Third, I will talk about composition and productivity of legislatures in subsequent columns. However, for the moment, how much time does the legislature (not just Parliament) spend on debating a statute?

In a paper titled ‘Rethinking the Functioning of Indian Parliament’, PRS Legislative Research wrote, ‘An overview of the 15th Lok Sabha shows a slowdown in legislative activity. In the 1st Lok Sabha, 49% of the total time was spent on debating legislation. This dropped to 28% in the 2nd Lok Sabha. In contrast, the 15th Lok Sabha has spent 23% of its time debating legislation… Lesser legislative time results in a larger proportion of Bills getting passed without adequate scrutiny and debate in the House…. With time available for debating and passing legislation shrinking, there is a need to strengthen the legislative process to make it more rigorous and time bound. Currently there is no institutional mechanism to ensure that stakeholders give their feedback on a law before it is introduced in Parliament. Public participation and feedback in the pre-legislative process would strengthen a draft Bill by ensuring that differences in viewpoints are addressed before its introduction.’ That’s Parliament. From a blog by PRS Legislative Research: ‘In most states, Bills are passed with little or no discussion. Most Bills are introduced and passed on the last day of each session, which gives Members hardly any opportunity to examine or discuss legislation in detail. Unlike Parliament, where most Bills are referred to a department related standing committee which studies the Bill in greater detail, in most states such committees are non-existent.’ That’s the state of a statute. Surely, we ought to do better, and surely, this should be on the agenda for reform.