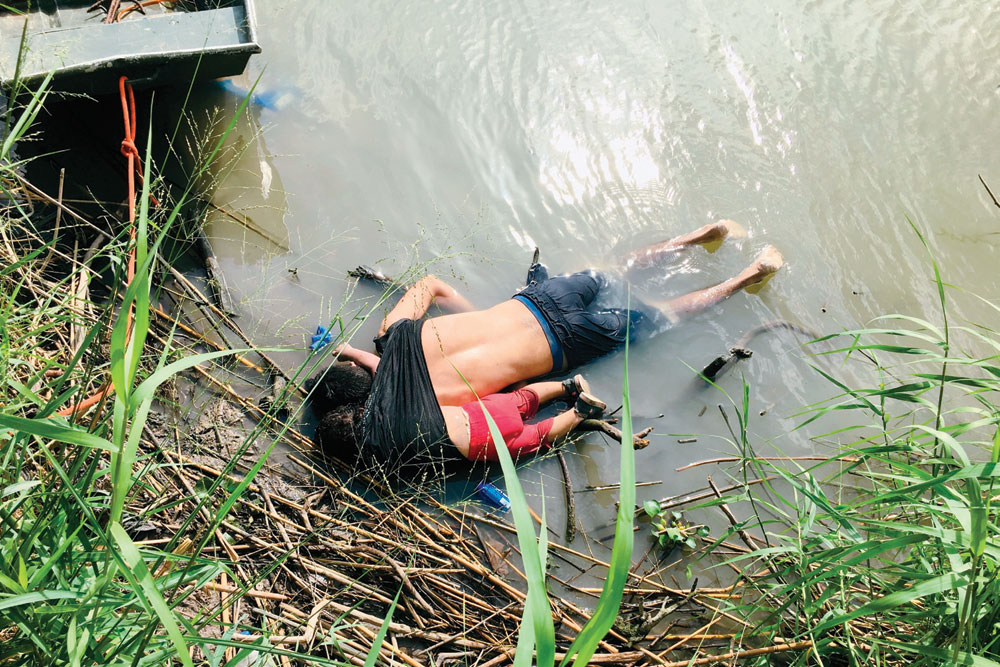 EARLIER THIS month, when 26-year-old Óscar Alberto Martínez Ramírez and his 23-month-old daughter Valeria were laid to rest in a private ceremony in El Salvador, their deaths were mourned across the world. In the last week of June, their bodies had washed up on the banks of the Rio Grande, the river that separates Mexico from the US. The child’s head was tucked under her father’s T-shirt and her right arm was locked in an embrace around his neck for fear of being separated from him during their perilous crossing. They drowned trying to cross into the US in search of a better life.

Mexican photo-journalist Julia Le Duc captured their final moment in an unforgettable frame that gained wide currency on the internet in the days that followed. Suddenly, people and nations, who did and did not have any obvious stakes in the immigration crisis, were moved by the enormity of the moment they had witnessed. But even as the photograph gained momentum, commentators drew attention to the ethics of circulating such graphic images. And the name that came up frequently in these discussions was that of the American writer and cultural critic, Susan Sontag’s.

One of the best-known theorists of photography, who was as concerned with the moral questions the medium threw up as its aesthetic challenges, Sontag became a household name thanks to the Met Gala earlier this year, which was inspired by the ideas in her classic essay Notes on ‘Camp’ (1964). In her writings on photography, she asked urgent and difficult questions, many of which remain pertinent to this day:

By making public the spectacle of such tragedies, do these photographs deprive the victims of the last vestiges of dignity? Or do such images serve a larger social and humanitarian purpose by arousing the viewers’ collective concern? Most crucially, how are we, the onlookers, expected to process the message behind such horrific visuals, exposed as we are to a barrage of such imagery on social media every day?

While these questions have trailed the evolution of photography since its inception some two hundred years ago, definitive answers are yet to emerge. As recently as 2015, the photograph of the body of the three-year-old Syrian refugee Alan Kurdi, who was drowned in the Mediterranean Sea while trying to cross into Europe, became a flashpoint of a global debate over the propriety of disseminating such images. However, long before the internet and social media turned the world into a global village, photographs have acted as powerful instruments of propaganda.

In 1858, Italian-born British photographer Felice Beato travelled to India to document the grisly aftermath of the revolt of 1857. Although several of his photographs were staged (Beato dug up the skulls of dead mutineers and arranged them strategically to heighten the effect of his compositions), he did manage to capture some chilling scenes of the hanging of the accused. These visuals were not only meant to act as deterrent against future rebellions, but also to boost the morale of the colonial government to tighten its administrative grip over the Empire.

The camera’s potential would soon be harnessed in subversive ways as well. In 1876-78, British civil servant Willoughby Wallace Hooper chronicled the devastating famine that raged through the then Madras Province. When his photographs of shockingly emaciated and malnourished Indians, either dead or on the verge of death, made their way back into England, there was a public outcry over the success of the colonial government’s ostensibly ‘civilising mission’ in the tropics. Hooper was also severely criticised for staying aloof on duty, instead of intervening and offering assistance to his desperate subjects.

In 1919, it was the turn of an Indian, called Narayan Vinayak Virkar, to use the camera’s power to the advantage of his people. That year, after General Reginald Dyer and his men killed hundreds of innocent citizens by opening fire on them at Jallianwallah Bagh in Amritsar, Virkar decided to document the aftermath of the atrocity by photographing its survivors at the accursed site. He urged people who had lost friends and family to pose next to the now-famous wall, riddled with bullet holes, pointing at the spots they had lost their loved ones.


Julia Le Duc captured the final moment of father and child in frame that gained wide currency on the Internet. Suddenly, people and nations, who did not have any obvious stakes in the immigration crisis, were moved by the enormity of the moment they had witnessed

As art historians Nathaniel Gaskell and Diva Gujral have pointed out in a recent study, Photography in India: A Visual History from the 1850s to the Present, the medium, from its beginning, would thus act ‘as cure and as poison’, depending on the perspective of the viewer. Indeed, the practice of photo- journalism, which began to emerge around the Great War and matured on the heels of its successor, would draw extensively on photography’s gift to act as a double-edged sword.

Born in 1933, Sontag grew up in the shadow of World War II, the Pearl Harbour attack, followed by the atomic bomb explosion on Hiroshima and Nagasaki. In the 1960s, as a supporter of the left, she deplored US brutalities in the Vietnam War, especially the use of napalm that caused mass casualties of civilians. She travelled to Sarajevo during the Bosnian war to witness the first genocide in Europe since World War II. So it’s no surprise that her engagement with visual archives, especially with press photographs, runs through the gamut of her work.

Strikingly handsome, Sontag was also widely photographed during her lifetime—and even in her last days by her partner and photographer, Annie Leibovitz. She anticipated the camera’s all-pervasive gaze as well as its ubiquity in public life, long before it became an essential feature of smart phones.

For Sontag, the camera was not only a tool for social and political change, but also an essential condition of modernity. ‘It would not be wrong to speak of people having a compulsion to photograph: to turn experience itself into a way of seeing,’ she believed. More than forty years ago when she wrote these words, humanity did not have cameras installed in handheld devices or a wide choice of social media platforms to share snapshots of their days, travels or meals on.

Deeply influenced by European avant-garde cinema, Sontag wielded the camera herself for several years, especially through the 1960s and ’70s, when she made several experimental movies, none of which made a mark, either critically or commercially. In 1977, she published On Photography, the now-iconic collection of her essays on the subject, which continues to be studied as a foundation of photographic thought. In the last years of her life, she would finish Regarding the Pain of Others (2003), a companion volume, focusing exclusively on the depiction of suffering and mutilation in war photography.

Writing at a distance of nearly three decades, Sontag departed from some of her earlier formulations on photography, though her discomfort with images of tragedy remained unabated. Given her investment in conflict zones around the world, her dilemma is understandable.

For Sontag, war photography wasn’t an archive of inert images that fed the news media. It was rather a ‘quintessential modern experience’, a service rendered by ‘specialised tourists’ known as photo-journalists. ‘Perhaps the only people with the right to look at images of suffering of this extreme order are those who could do something to alleviate it—say, the surgeons at the military hospital where the photograph was taken—or those who could learn from it,’ she wrote. ‘The rest of us are voyeurs, whether or not we mean to be.’

Could the assault of self-same images of suffering, day after day, make us immune to their potency? ‘Shock can become familiar,’ Sontag conceded. ‘Shock can wear off.’ Yet, she added a proviso: ‘representations of the Crucifixion do not become banal to believers, if they really are believers.’ By that logic, the photograph of Alan Kurdi, or of Valeria and her father, cannot cease to affect true believers of human rights and dignity.

The Inward Gaze of Olivia Fraser