Curse of the Template

How Covideology has infected dissent 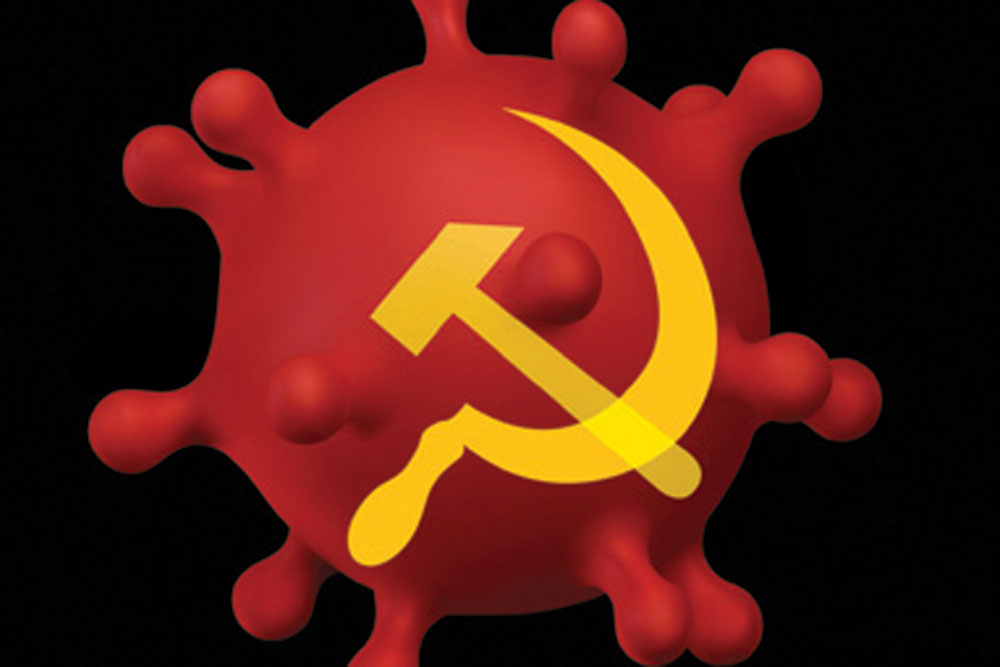 IN LOCKDOWN ENTERTAINMENT, nothing could have rivalled this piece of video revolution by a CPM politburo member from Kerala, a gentleman comrade of proven cultural sanity otherwise. When a colleague forwarded the clip to me—aren’t we all sharing the digital comfort food nowadays?—I didn’t know the extent to which the Marxist mind had been invaded by the virus. I said invaded because war was the preferred operative word in the comrade’s video cry.

There he goes: what we are fighting today is more than a war against a marauding virus; we are fighting a war against the capitalist system, and it’s for us to turn this into an ideological war, a people’s movement, and it’s time to get inspired by the Lenin of First World War vintage. He traces the provenance of the pandemic to the evil laboratory that is capitalism. The counter-revolutionary virus, a recurring metaphor in communist screeds, never looked more promising to me.

And his emphasis on the war imagery should further vindicate Susan Sontag’s much-quoted essay on how language turned diseases such as TB and cancer into de-humanising metaphors. A pandemic turned our comrade into a fretting cartoon commissar set against the carrier-capitalist.

If our comrade is a pastiche from a past orphaned by history, Slavoj Žižek is the real thing. The Marxist philosopher from Slovenia has already won the trophy for beating fellow zeitgeist chroniclers with the first book on the pandemic. Take this line in an excerpt from Pandemic! Covid-19 Shakes the World: “So, again, the choice we face is: barbarism or some kind of reinvented Communism.”

The adjective he adds to barbarism is ‘techno’. The experts of the world have come together to form a “technocratic dictatorship.” In a video interview I watched, the rambling philosopher raged against the evil imperium of science and technology. Salvation lies in dusted-up ideology. In an unequal world, our anti-viral technological solidarity has only widened the gap.

What unites the comrade and the philosopher is an old ghost. Still haunted by the purest of spectres, the comrade, in his comic-strip revolution, and the philosopher, in his neo-Marxist scream of consciousness, cut this endangered planet into neat pieces that will fit smoothly into the template of ideology. Once the symmetry of perception is achieved, reality gets easier to absorb and analyse.

The comrade and the philosopher are the symptoms of a parallel infection. Let us call it Covideology. It has already made dissent, on matters ranging from lockdown to testing, an old sentence rewritten for a newly afflicted world. No matter what you are, a lockdown subversive or a test-more fundamentalist, the enemy of the cause can be put on the same ideological stake that has been used for other corrective measures in the past.

Take Donald Trump and the liberal rage against his Covid crimes—fewer testing, shoddy testing, expert-bashing, anti-scientific rant, media obsession, narcissism… On almost every count, he is worthy of the rage. Still, one doesn’t need to exonerate the unpresidential President to see the weary familiarity of the rage. It is the same ideological template that has been used to make sense of Trump’s transgressions in the past, and transgressions have been multiplying ever since the day of his election. The pandemic is just another occasion; the ideology that has been deployed remains the same. And the President is such a resourceful confrontationist that he supplies daily feeds to keep the permanency of the template.

And it’s ideology that drives the liberal anger against the so-called social as well as religious insensitivity of Narendra Modi’s leadership during the pandemic. Yesterday, it was cow vigilantism and majoritarian brutalism, the indexing of the outcast and the shaming of the other community. Today, the stranded migrant and the stigmatised Muslim are just two new items provided by a pandemic to fortify the same argument, which remains static. Only the items change. The argument doesn’t.

Template dissent is all about the certainties of arguments pre-written by ideologies. It homogenises ideas, abhors nuances. The unequal India may be as old as independent India, and the socialist ideals of our original liberal rulers may have succeeded in sloganising it, not abolishing it. In the magical realm of template dissent, the unequal India is the wretched India where the migrant labourer gets added poignancy during a lockdown in right-wing India. In template dissent, arguments stifle inside closed minds.

Today, our choices are determined by experts and politicians, and in fear, we have given in to them with least resistance. From shared hardship, we are now facing up to a reality as horrifying as a pandemic. In template dissent, old ideologies feed on new fears.

The Expert and the Populist