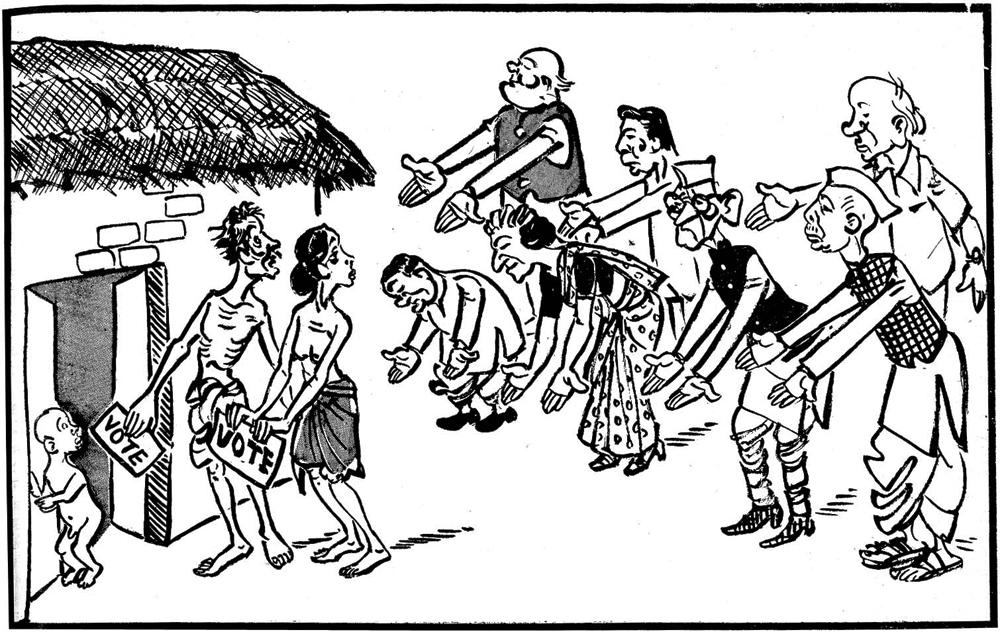 A cartoon By K. Shankar Pillai


Kerala has a long history of political satire. It was no surprise when some recent political events related to COVID-19 led to a deluge of satire anchored mainly through social media troll pages in Malayalam. Social criticism through political satire gains significance in a democracy when the mainstream media and sections of civil society focus on their vested interests rather than offering constructive criticism. An apparent political bias and nexus with feudal and religious elements dominate the nature of contemporary media and civil society in Kerala.

Satire is popularly hailed as a tool in the hands of the powerless against the powerful. It represents the real sense of democracy where people get an opportunity to engage and question the powerful about issues that matter to them. Further, satire reinforces the ideas of freedom of speech and encouragescritical thinking and debate in democratic societies. However, it is also essential to deliberate upon the negative influence of satire. For instance, the recent rise of Right-Wing trolls causes grave danger to democracies and the concept of secularism across the world, including Kerala.

One can trace the history of satire in Kerala to a traditional art form called Ottan Thullal which involves dance and poetic performance. It was introduced by Kunchan Nambiar in the 18th century. Ottan Thullal was known for its humourous take on various socio-cultural issues that plagued society. The use of colloquial Malayalam in the performances attracted common people to this art form and increased its reach amongst the population. The emergence of other performance-based art forms like Kadhaprasangam (storytelling performance), mimicry, political skit in the mainstream entertainment channels, and the rich history of progressive daily newspaper cartoons, etc. had laid down the foundation and radicalised the tradition of social criticism through political satire in the state.

Cartoons play an important role in creating a society that is tolerant of satire and criticism. In 2019, the Malayalam cartoon tradition celebrated its centenary year. Famous political cartoonists like Shankar, Abu Abraham, OV Vijayan, Kutty, BM Gafoor, and contemporaries like EP Unny, to name a few, are part of this great tradition.  In fact, it is impossible to think of political cartooning in India without Kerala’s contribution.  The tradition of satire in Kerala is also considered a by-product of the progressive socio-political movements led by social reformers and the Communist Movement in the state.  In an article about the emergence of the cartoon tradition in Kerala, EP Unny (2019) points out that, “Kerala practiced not just untouchability but unseeability as well, cartooning emerged at these parts when caste was challenged, and that took a while.”

Healthy competition amongst political parties and high literacy throughout the 20th century best explain Kerala’s affinity for media platforms, especially newspapers. As Robin Jeffery (1987) argues, politicisation- an interest in and knowledge about politics- is the key to an increased interest of people in media. This evolved nature of Kerala society also aided the growth of political satire in the state.

Recent political events associated with the reactions of the opposition political parties to the government’s successful COVID-19 strategies have contributed to an outpouring of social media-based satire in Kerala. This phenomenon also points out the flip flop of Malayalam media in covering the COVID 19 crisis.  As P Sainath (2019) argues, “good journalism is what which engages with the great process of its time and the great process that one needs to engage is in socio-economic inequality, agrarian and climate crisis, etc.”

The Kerala experience shows that political satire through social media is trying to fill the void created by the silence of mainstream media and sections of the civil society about a range of issues that matter to the common public such as the recent Sabrimala Temple Entry Movement and the media’s opposition to the strategies of the government in the ongoing COVID-19 crisis in the state. These positions of media were primarily fuelled by its feudal ownership pattern and vested political interests.  In a nutshell, democracy needs satire when we don’t have good journalism to offer constructive criticism.

Wide reach and access to internet throughout the state is central to the recent proliferation of social media related political satire in Kerala. As per the Internet and Mobile Association of India’s (IAMAI) 2019 numbers, Kerala is second in the county in internet penetration right behind Delhi NCR. Further, the Left government in Kerala has recently declared that access to internet is part of basic human right. The state also targets to provide internet connection to each household and free connection to 20 lakhs BPL families.

Anybody with an internet connection can thus be a creator and commentator on any issue which can be both good and bad. The easy accessibility of the medium has significantly aided the growth of troll pages. Factors like the strong element of comedy, connections with popular Malayalam movies and actors are considered as the major reasons behind the popularity of these troll handles. Perhaps this is the most attractive element for youngsters to follow these troll pages that put out political satire. These handles thus exploit the familiarity with pre-existing film content to make comments about the current events. This is a great strategy to attract attention.

Troll pages in Kerala regularly engage with political events in the state. They comment upon government policies and closely follow remarks made by celebrities and religious leaders. Troll Republic, ICU (International Chalu Union), etc. are the most prominent social media handles amongst others which create political satire in contemporary Kerala. However, it should also be noted that there are several others that are anti-progressive and propagate casteist, misogynistic, communal agendas.  This is similar to the mimicry tradition in Kerala, which was also known for its insensitivity towards many issues.

The current troll handles mainly concern themselves with the most recent political activities in Kerala. For instance, a recent video released by the Opposition Leader’s office in which he is seen talking to the Malayali expats over the phone to enquire about the COVID-19 situation had attracted a flood of trolls. These troll pages immediately associated this incident with scenes from the most popular Malayalam comedy movies.  One of the most common ways of making a meme involves using a popular Malayalam movie scene and superimposing it with funny dialogues/commentary pertaining to the situation at hand.

The arrival of private television had a vital role to play in increasing the presence of political skits on Malayalam television. Political skits featuring look-alike of the leading politicians of the state always had a wide reach among the television viewers. Look-alike of leading politicians like Pinarayi Vijayan, AK Antony, VS Achuthanandan, and Oommen Chandy, etc. have dominated the prime time of most of the entertainment channels in Kerala over the last two decades.

The popularity of the political comedy shows that play every night on Malayalam news channels is also indicative of the reach and acceptance of political satire in the state.  Most of the leading news channels in Kerala have a daily political comedy show such as  Chitram Vichitram (Asianet News), Dhim Tarikada Thomand Vakradrishti (Mathrubhumi), Thiruva Ethirva (Manorama News), Lallu Speak (News 18), Polimix (Mediaone), and Democrazy (Reporter). Munshi is another satirical program on Asianet News which has a longer history than others. This daily show has been running since 2000.

Studies on the impact of watching political satire on television have noted that it can influence the youngsters more than any other age groups.  Amy Becker’s (2013) study on political comedy on American television has concluded that “a program which increases all likelihood that young people who watch will participate in politics.”

Everyday politics in the state offers a truckload of content to these troll handles. Trolls expose the political blunders and raise valid questions about contemporary occurrences.  Kerala Opposition Leader, Ramesh Chennithala used terms like ‘Media Mania’ and ‘Image Building’ to refer to the daily press conferences of Health Minster, K K Shailaja. While the mainstream media remained silent about his rude comments, the troll pages went in a tizzy to highlight this incident and also question this indecency.

Social criticism has played a vital role, along with many other factors in transforming the Kerala society.  Researchers of public action in Kerala have placed social criticism as an essential element that contributed to the political vitality of the state. Blatant political biases, affiliation to right-wing forces, caste, and gender discrimination, advancing communal agendas, have defined the character of media and sections of civil society in the last few decades in Kerala. The social media troll handles could perhaps be deemed as the new alternative and addition to the state’s long-standing history of political satire.