A disruptive neighbour like China does not deserve India’s respect 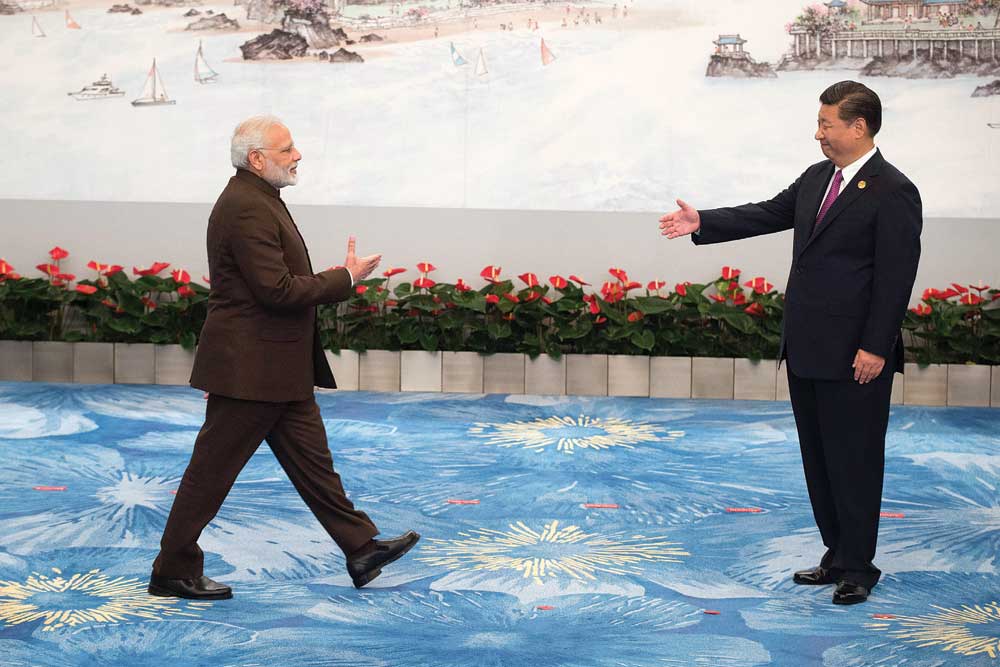 IN THE 1950S, the administration of US President Dwight D Eisenhower would periodically threaten to vapourise China with atomic weapons. Barring the Soviet Union, no other country had them then. Far from being intimidated, as the US Secretary of State John Foster Dulles had hoped, Chairman Mao Zedong called in the American journalist Edgar Snow and famously declared that he considered the Bomb a ‘Paper Tiger’ and, further, that 300 million—half the population of the country at the time—would survive a nuclear holocaust. It was the second intimation to Washington that Communist China was no pushover, the first being the People’s Liberation Army’s entry into the Korean War in October 1950 as promised by Beijing if General Douglas MacArthur’s forces crossed the Yalu River.

It was not that the US lacked the wherewithal to reduce China to smoking irradiated ruins. Rather, it was the Chinese resolve that psychologically unhinged the US. It is in that analogous respect that China has been revealed as a ‘Paper Dragon’ by the Doklam confrontation.

Whatever else Narendra Modi got out of the BRICS summit in Xiamen, he will have made the point that if Beijing indulges in provocations along the disputed border which are expected to continue—the Indian Army chief General Bipin Rawat believes this is the new normal—it can expect a strong Indian response.

Of importance was not just the ‘local’ advantages of terrain, numerically superior forces in the vicinity, and pre- positioned stores that India exploited, as foreign analysts aver, but the stealth and speed with which elements of the 164 Mountain Brigade of the 27 Mountain Division deployed nearby foiled the PLA plan of bulldozing a motorable road on the high-altitude plateau 3,350 metres above sea level. It hinted at prior field intelligence supported by theatre-level electronic communication intercepts priming the Indian troops’ intervention at just the right moment once Chinese intentions could not be plausibly denied by Beijing, and, thereafter, standing their ground unruffled by the taunts emanating from the Zhongnanhai and Global Times, the Chinese Communist Party’s megaphone. It was matched at the Delhi-end by the zen-like stillness of the Indian Government, which simply refused to rise to the rhetorical bait repeatedly floated by Beijing, thus agitating the latter further.

The attempt by the Chinese Foreign Ministry to assume a mantle of legitimacy for PLA actions in the India-Bhutan-China tri-junction area by referring to the 1890 Sino-British Treaty fell flat because of its supercession by the 2012 agreement requiring Bhutan and China to maintain the status quo pending a final and formal demarcation of their common border. This last part China has stalled in 24 bilateral meetings held since the mid-1980s. The Indian Army’s role in safeguarding Bhutan’s sovereignty and territorial integrity, in contrast, was as per the Indo-Bhutanese treaty. With no legal justification for its action and India not backing down, Beijing was in a tizzy, even egging on its soldiers to resort to school-boyish pushing and shoving and stone-throwing that their Indian counterparts happily reciprocated. With the eyeballing episode quickly spiralling into a farce, China’s frustrations and embarrassment increased.

Whatever else Modi got out of the BRICS summit, he will have made the point that if Beijing indulges in provocations, it can expect a strong Indian response

The gradual ‘loss of face’ as the 72- day clash unfolded before a widening and intrigued audience of countries stretching from the South China Sea, the Far East, to Russia and the US, could have triggered something much bigger as advocated by the more extreme sections of the PLA to Xi, newly designated ‘Supreme Commander of the people’s army’. Except there simply weren’t enough Chinese forces at hand to guarantee Beijing an outcome it desired in a ‘short intense war’, which the Indian Army expected and was prepared to fight. Had the balance of forces been slightly better and the first incursion been timed for late Spring after the snow had melted, China might have been motivated to escalate, indulge in its favourite pastime of ‘teaching [military] lessons’ to adjoining states. As it was, however, June soon became August as Xi prevaricated, and the first stiff winds would intimate the coming cold and the difficulty of sustaining military operations at altitudes inhospitable to man and beast.

What Xi had to consider was the immediate loss of exports to India of some $61 billion, no small sum at a time when the Chinese economy is in the grip of a slowdown and faced with US President Donald J Trump’s threat to close down the unbalanced Sino-US trade, which could leave it gutted. Secondly, other than Pakistan, which was hurrahing Beijing on, no other country—not even its Southeast Asian client states in the ASEAN, Laos and Cambodia— was persuaded by China’s case. Russia asked Beijing to tone down its belligerence. Japan came down openly on India’s side. The Far East was asimmer with Trump’s words of ‘fire and fury’ aimed at North Korea and Kim Jong-Un’s response of triggering more missiles, threatening Guam and buying security for himself and his regime by conducting on September 2nd a thermonuclear weapon test capable of tailored yields—made possible by surreptitious Chinese assistance with materials and hydrogen bomb- expertise—and the US Navy increasing its ‘freedom of navigation patrols’ (FONPs) in the South China Sea. The regional situation was just too unsettled for Xi to risk making it infinitely worse.

Still, the question arises: Why did Prime Minister Narendra Modi let Xi off the hook, let China save face on Doklam by agreeing to a sequential, not simultaneous verifiable, withdrawal— with Indian troops pulling back first? The consensus view is that India did the right thing to permit a nuclear adversary to escape from the corner it had painted itself into with what little self- respect it could. But this was not just a matter of rubbing Xi’s nose in the dirt. The larger aim should have been to etch into Beijing’s mind the certainty of Indian response—crucial to showing a tit- for-tat intent. After all, Doklam was a departure from the usual tolerant and forbearing attitude and views of the Mandarin- speaking ‘China specialists’— diplomats of the Ministry of External Affairs, ex and current, and RAW officers—who shape Indian policy. It has resulted in Beijing, far from being solicitous of Indian strategic concerns and interests in return, going out of its way to strategically imperil India and undermine its security. This it does because it sees it as a cost-free exercise. When India did nothing by way of a strategic riposte to China’s creating the gravest danger imaginable to India by nuclear-missile arming Pakistan, starting in the late 1970s, Beijing was correct in assuming thereafter that it could walk all over India, do anything it wanted, and not suffer retribution. If there’s a rectification of this passive approach, then it was a chance to signal a changed Indian mindset that Delhi missed.

With no legal justification for its action and India not backing down, Beijing even egged on its soldiers to resort to school-boyish pushing and shoving and stone-throwing

Had the Modi Government explained to the world with evidential information just how the confrontation built up and was defused, India would have had a diplomatic drop on China. Not doing so left the Chinese Foreign Minister Wang Yi free to use the cover of India withdrawing first to say with a straight face that he hoped India “has learned its lessons”!

Is India so invested in BRICS that Delhi did not want to torpedo Xi’s summit? If so, why? India could have gained lots more by sending some functionary—the Foreign Secretary, perhaps—as his substitute to pointedly show his disquiet with Xi’s ongoing policy of creating border incidents at will. The strategically more telling action would have been for Modi to weave together the BRIS states (BRICS minus China) into a smaller, tighter, more cohesive group of countries that are economically more equal as well. As it is, China casts a giant shadow on BRICS, making it a vehicle to advance mostly its own interests. This is evident, for example, in the New Development Bank that Beijing has subsidised and hence insists on its lending and investment decisions.

Worse, at Xiamen, why did Modi and his team work the ‘big responsibility’ angle to get China on board the anti-terrorist plank? Does the Prime Minister really believe that the BRICS statement mentioning the Lashkar-e-Taiba and Jaish-e-Mohammad as terrorist outfits will change Beijing’s attitude to Pakistan’s use of terrorism even an iota? If anything, it is a throwback to when Jawaharlal Nehru studiously campaigned for China to replace Chang Kaishek’s Taiwan in the UN Security Council, the seat that both Washington and Moscow had previously offered India and which Nehru, in one of the great historical blunders, had mindlessly turned down. Nehru’s helpfulness, it may be recalled, earned him no gratitude, just more vilification by Mao as ‘an imperialist running dog’.

It is all very well to espouse the mantra voiced by Modi at the Shanghai Cooperation Organization summit in Astana of not letting ‘differences become disputes’; quite another thing, however, to make this the operating principle for bilateral relations with China. It would mean, for example, Delhi forswearing policies to curtail China’s strategic space and imperatives, such as cooperating with Japan on joint FONPs in the South China Sea, transferring large numbers of missiles of all kinds (including the Brahmos supersonic cruise missile) to Vietnam and the Philippines, and exercising with the US and Japanese navies in the East Sea. Such Indian actions because they would engender ‘differences’ and hence ‘disputes’ with China, would be avoided by Delhi without in any way moderating Beijing’s hardline India policy. Conspicuously making India’s nuclear stance China-centric will telegraph the message to Beijing that military escalation at the border could at any time go ballistic.

China is habituated to being treated as exceptional. Modi will discover that this only encourages its appetite for belligerence. As a disruptive country on the make, China should begin to be handled by Delhi with similar deviousness and contempt, with every opportunity taken to show it up for the paper dragon it is.