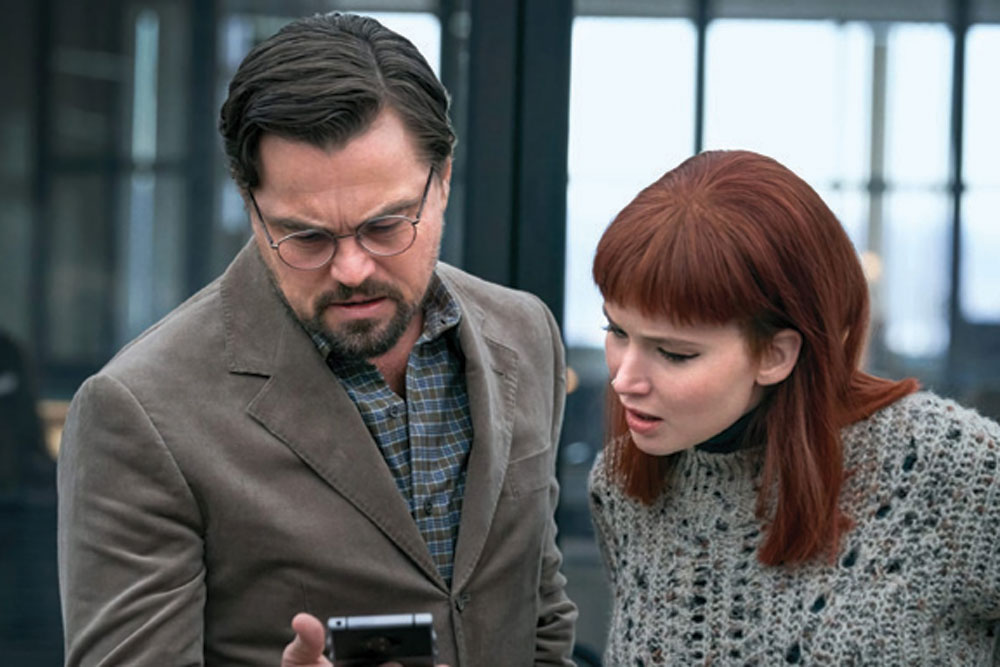 Leonardo DiCaprio and Jennifer Lawrence in Don’t Look Up


ALLEGORY SHALL SAVE the planet. That’s right, when everything else imagined by experts, alarmists, doubters, deniers, stoics and fatalists has failed to make us see the horrifying end of Earth we have taken for granted despite recurring warnings. Science is too serious-minded and fascinated with the molecular thrill of end-ism to perfect the art of messaging. Science frightens—and the frightened recover and move on. Politics is the theatre of simulated earnestness, and at your average summit, the assembly of the dutiful thinks the job is done when the loftiest of resolutions are passed, and platitudes are handed out. The self-consciously altruistic constituency of climate activists, like every other believer in the religion of activism, is blinded by the brightness of their righteousness. Doubters and deniers only add their dismissive bits to the still-unsettled issue of imminent planetary unravelling.

Don’t Look Up, with a cast of Hollywood’s über-stars and directed by one of its most successful satirists/lampoonists, is on its way to becoming Netflix’s most watched film. Critics have panned it; op-ed columnists are still deconstructing it (and one disagreeing conservative columnist has even offered some script-doctoring of his own); and scientists have welcomed the loudest of wake-up calls, finally. The film is populated by the usual suspects picked up from headlines: the nerdy researcher, the wimpy scientist, the denier president, the Big Tech demi-god, vacuous anchors, the clickbait class, and of course, the white racist.

For Adam McKay, the filmmaker whose previous works are on cashing in on the economic crash of 2008 and on Dick Cheney, the reality is so dire and immediate that he can’t afford nuances and subtleties to minimise the urgency. Dark comedy brings the darkest message home without demanding much from the viewer, particularly when the political and cultural context is ideologically appealing to anyone disillusioned with the casual brazenness of the right and the cosy indifference of the liberal. To be earnest and shrill is to stand in front of doom and scream your conscience out lest we sleepwalk into inferno.

This is what hits the scientists: a rogue comet is hurtling towards Earth and it won’t take more than six months for the collision that will end it all. This is how the president, a populist dealmaker in Republican red, reacts: Wait, the election is round the corner. This is how the media treats the doomsday revelation: Isn’t it really funny that we are all going to die in such a spectacular way, but are you sure? The Big Tech demi-god has the solution that can turn even apocalypse profitable. Add social media shaming and television’s rating-driven infotainment and the pornography of End-of-Everything and you get a world condemned to extinction by the collective insensitivity of the living—the good is outnumbered by the mocking evil, and after such knowledge, we are made to believe, there can be no forgiveness.

There can only be bad art for a good cause—or that is the critical consensus. The impression you get from the critical rage against the film is that McKay’s theatre of the absurd, staged before the legion of the ridiculous and the ribald, is an exaggeration, which in its comedic pedagogy reduces art to a-plague-on-both-your-houses nihilistic pleasure. It doesn’t help much when the director himself enters the arena and dismisses the critics as climate-change deniers. He is so sure about his film, and its social commitment. And from a certain political culture angle, Don’t Look Up is a perfect American metaphor screaming out its message. In an America of Trumpian populism and Fox News evangelism and meta-planetary vision of its tech billionaires, the art of dissent borrows its narrative style from the book of its enemies. If it’s an intentional narrative technique, it’s a triumph. And I would like to see it as intentional.

It’s the aesthetics of the comic book, not the dystopian thrill of science fiction. It is real, and in McKay’s telling, the overwhelming urgency of the moment needs the official art of resident evils, which include the transactional politics of the populist president, the ideological campaigns of television, a soulless establishment, a meme-crazy social media, a morally empty civil society…For the last pure scientists standing on the strength of their social conviction, the end of everything has to be as dramatic and deadly as a comet—after all, the highest standard in extra-planetary mysteries in American popular culture was set by Star Wars. McKay’s aesthetics of kitsch that offended critical sensibilities has to be ideal—and intentional. And very American.

It has historical precedents. When art teeters under the weight of social message, it’s the triumph of kitsch, which, in the words of a novelist who had experienced it in real life, was the aesthetics of communism. In capitalism’s First World of deferred extinction, the comic book art is perhaps the last reminder before the comet hits. Science shall save the planet; kitsch shall tell the story of it. 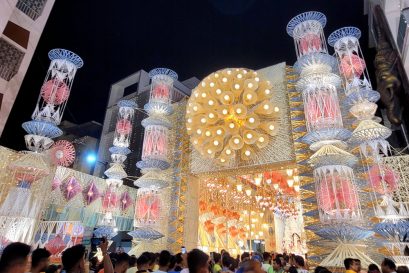 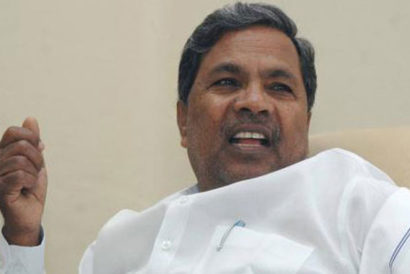 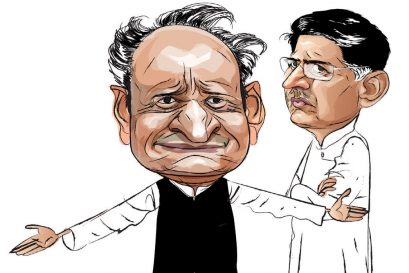