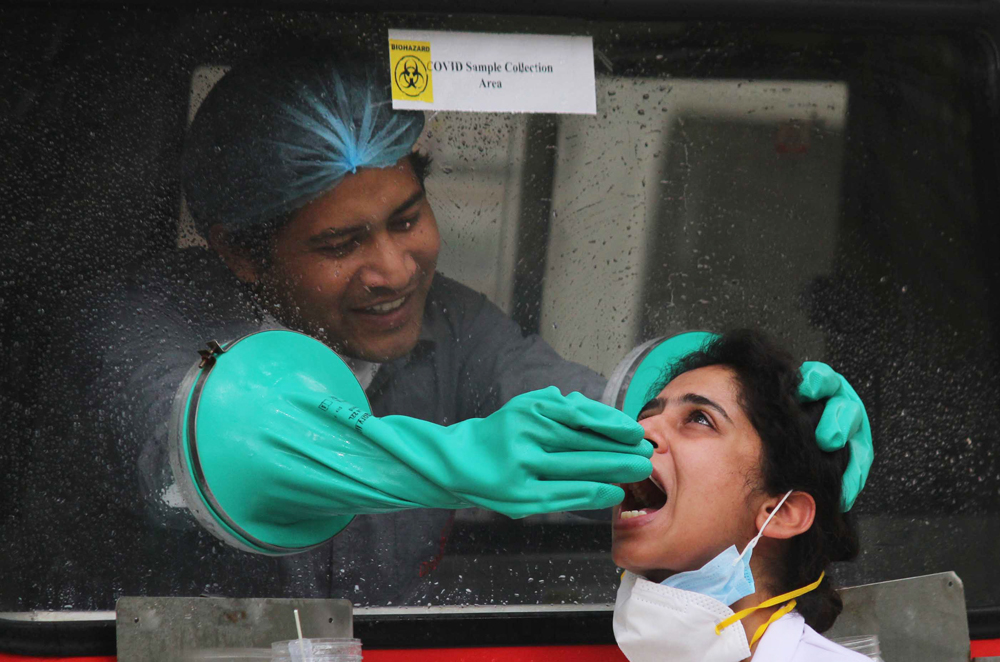 
‘Rahim says: If you find something big, do not throw away the small thing when the needle is called for, what use is the sword.’—Rahim

For over two months, the World Health Organization (WHO) has been rehearsing the mantra of ‘test, test, test.’ Despite occasional unreliability, in the initial phase of the advancing disease, testing is essential to detect the presence of the coronavirus in suspected segments of the population. India has been a serious laggard in this regard, its testing consistently behind not only the global curve, but more importantly, well behind the trajectory required to keep in tandem with the spread of the virus in the country itself. Recently, a Government official declared that India is ramping up testing capacities to half-a-million a day. Might this be a case of ‘too much, too late’? Testing is crucial to contain the virus in the initial stages when overseas travellers (who are the ‘prime suspects’) arrive. Once travel restrictions are in place for a long time, testing becomes increasingly less important as community transmission has in all likelihood already happened and exhausted itself.

The timing of the Government’s decision to ramp up testing may be quite off, and may arguably be yet another waste of resources. Could it be that the ball is already, so to speak, safely in the gloves of the wicketkeeper when the stylish batsman essays a drive through the covers?

The accompanying table shows a comparison of Covid-19-related data across three groups of countries, belonging to the Western world, to South Asia, and to the Far East. What is unusual about the manner in which the data is presented here is that its focus is on the impact of testing rates on the detection of corona-positive cases. Also shown is the numerical relationship between testing and mortality. The key column is B/A, which shows the number of tests for every million of the population. At one end of the scale is Germany, with almost 33,000 tests per one million of the population (roughly, one out of 30 people tested). Bangladesh, with a mere 745 tests per million is at the bottom of the scale (8 out of 10,000). Much closer to Bangladesh than to Germany, India has conducted 1,213 tests per million (12 out of 10,000). 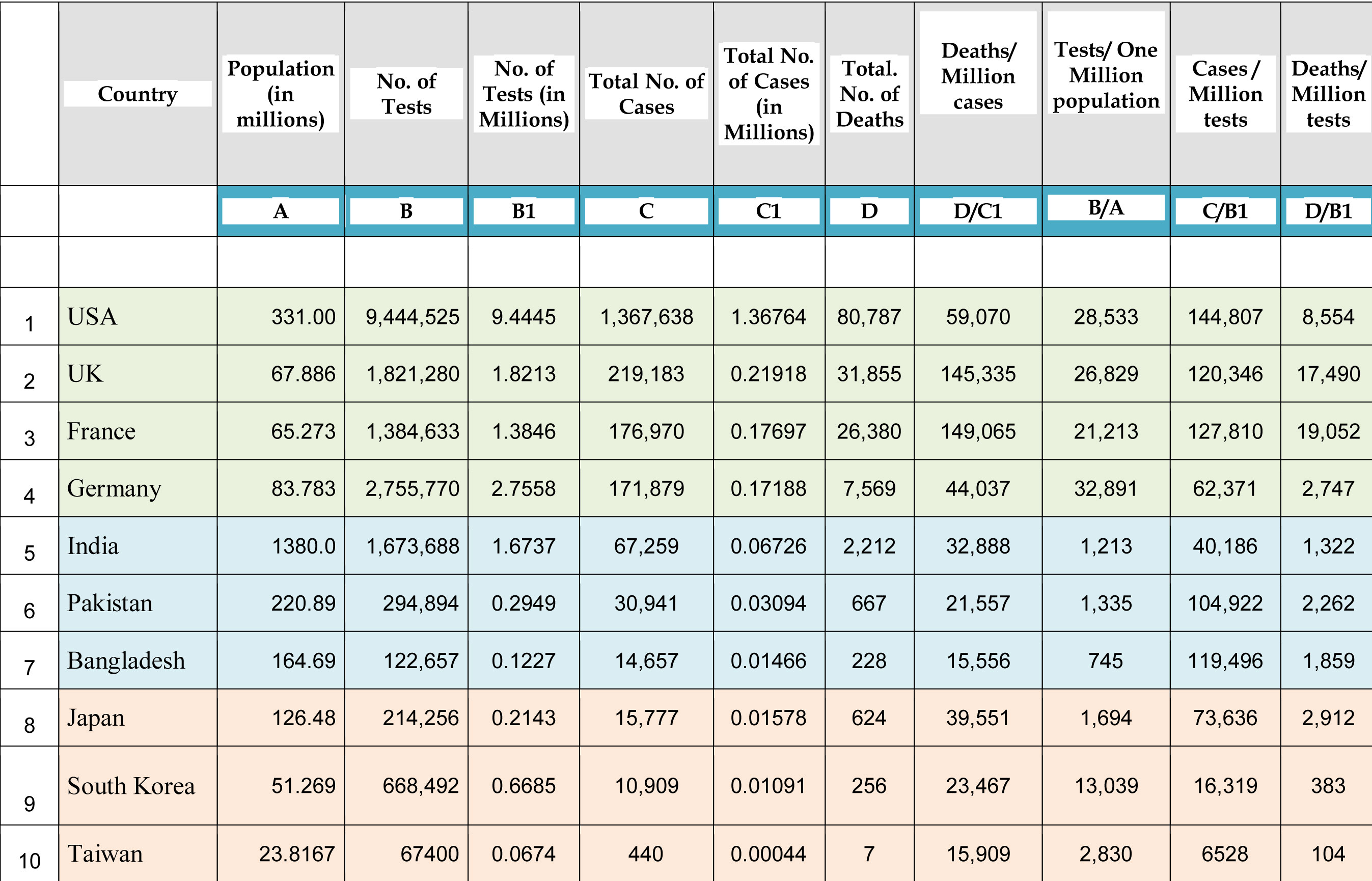 (SOURCE: https://www.worldometers.info/coronavirus/#countries (Data updated on May 11, 2020)

It is often being argued that India’s reported numbers are so low because of inadequate testing. The latter can be corrected, hypothetically, by assuming (for instance, South Korean or German) testing rates in India.

If the numbers above are accurate (and the case and death rates per million tests are as stated in columns C/B1 and D/B1 above), had India tested at the same rate as South Korea (10.75 times more tests per million population than India), it would have today 7,23,034 cases (about 11 times the observed rate), and 23,779 deaths instead of the reported 2,212. Even these latter numbers are nowhere close to some of the early predictions of a ‘tsunami of cases and deaths’ that was feared. Roughly three quarter of a million cases of flu and around 24,000 deaths over a two-month period are certainly a serious matter. However, in a country with a population of 1,380 million people, does it amount to the sort of cataclysm that we were warned of? These numbers could be compared to the viral infection and death rates from flu in a normal year to see if there is a marked rise in the trend this year. (For perspective, it may be kept in mind that 810,000 deaths take place in India every month in a normal year. Is a 1.5 per cent increase in the number of deaths every month, over a period of two months, catastrophic?)

If anything, these extrapolated numbers would be over-estimates for cases and deaths in India, since testing is usually focused first on populations/communities suspected to be more likely victims, and the case and death rates per million tests as stated above are derived from such samples. Arguably, detection rates per population of people tested is falling consistently for every, say, successive bunch of 1,000 tests. Spatially, primary infections are more likely in the metros than in smaller places.

Why, then, such a panic?

Merely for the exercise, even if one applies to India (case and mortality rate) data German testing rates, among the very highest in the world, and about 28 times the actual testing rate of India, we would get 1.88 million infections and 61,936 deaths in India. Even these numbers would not even be comparable with the actual data emerging from highly afflicted nations like the US, where more than 80,000 people have already perished. Again, for a country with 4.2 times as many people as the US, this would be not even a quarter as alarming as the US predicament today.

Besides, almost seven weeks into lockdown, it has been more than long enough for the virus to incubate and cause great damage to public health in far-flung areas of India. Had there been anywhere close to 1.9 million infections and over 60,000 deaths, surely there would have been a run on hospitals, cremation ghats and cemeteries? But no such thing is happening. As a matter of fact, in several parts of the country, mortality and morbidity rates have fallen (for reasons understandable and not) so significantly that hospitals are running out of business!

Defenders of a harsh lockdown may persist in arguing that even these extrapolated numbers are ‘low’ precisely because of the lockdown, a proposition we can, alas, not really test. We shall never know what the Indian experience would have been like without the lockdown. Except that if the virus affects all human cultures in roughly similar patterns that can be generalised across medical science (the very basis of the desired vaccine, for instance), then the experience of many countries which have not done harsh lockdowns (such as Taiwan and South Korea), but instead did impose early travel restrictions, rigorous contact tracing and precise quarantines, shows that these extrapolated numbers are probably high overestimates.

Moreover, for all the claims the Government is making over containing the virus, India’s record is about the same as other large SAARC nations like Pakistan and Bangladesh, and significantly worse than smaller nations in the region like Myanmar, Sri Lanka, Maldives, Nepal and Bhutan. The lockdown policies across these nations are varied. It is possible that the virus may be getting contained of its own inner dynamic rather than specifically due to the Government’s harsh and sudden lockdown policy.

While the lockdown has been unexpectedly severe across most of metropolitan India, something occasionally replicated in towns and villages too, there have also been frequent lockdown violations in virtually every part of the country. This has been especially the case with the many mass migrations which the country has witnessed over the past seven weeks. We should have seen a ballooning of cases and deaths by now if the initial fears of the experts were valid. The fact that in almost no case have the many quarantine centres at the state borders reported a local surge of cases, let alone deaths, gives the lie to the Government’s panicky policies. In the absence of testing, there would at least have been significant symptoms in tens of thousands of cases by now. We do not even see this. Instead, people in the tens of millions are suffering from thirst and hunger. The cure has proved to be much more harmful than the disease.

Might the generated panic in countries like UK, US and India, have causes in political aspirations, rather than medical realities? And could it be that what we are seeing in India at the moment by way of the emerging consequences of an economy hastily derailed by the sudden brakes applied on it by the national lockdown is actually an unconscionable case of policy failure, masked by a politically doctored dread?

The reader may judge for herself.