The China Bubble on the Precipice?

Why Xi Jinping is diverting attention from the country's internal contradictions 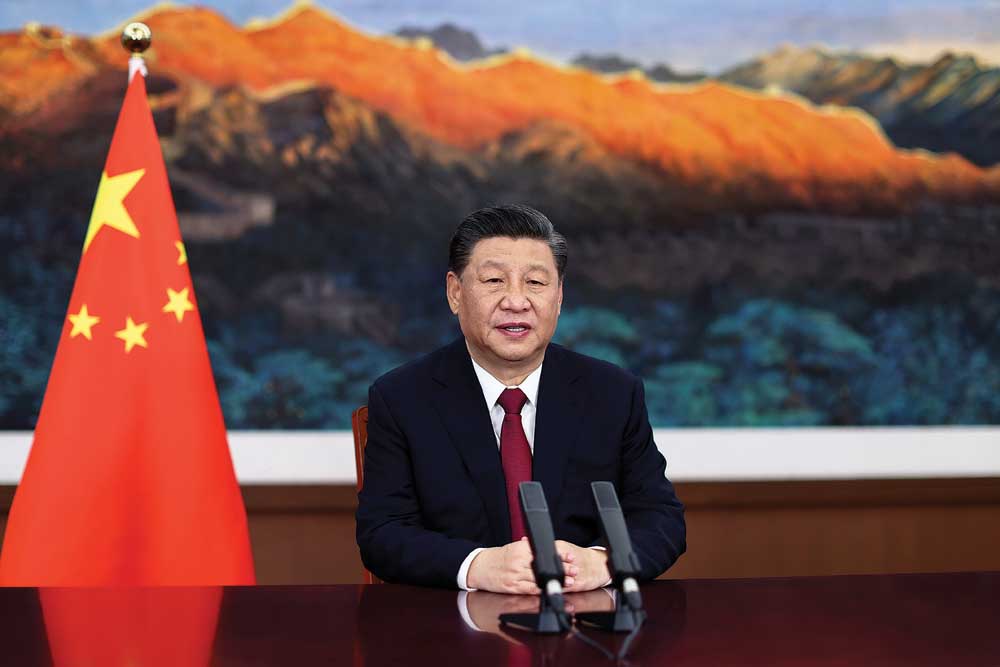 
China is hurting. Its debt is close to triple its GDP. Its spectacular growth rates of the first quarter of this century are slowing down because they were based on building factories, roads, bridges and apartment blocks that were no longer needed. The market could not absorb any more of what was being produced on unending lines of credit. The emerging collapse of companies like Evergrande, Fantasia Holdings and Sinic Holdings and the stress faced by banks like The Industrial and Commercial Bank of China, The Agricultural Bank of China and The Bank of China have jeopardised the savings and aspirations of millions of China’s ageing middle class.

China’s market socialism has rapidly transformed the country into one of the most economically unequal societies on earth. The Gini Coefficient is an established statistical number that demonstrates the degree of inequality in the distribution of a nation’s income and wealth. For China, the Gini Coefficient is officially around 0.47, worse than that of the US, which is at 0.41. The wealthiest 1 per cent of China’s population now holds around 31 per cent of the country’s wealth (not far behind the 35 per cent in the US). However, most people in China remain surprisingly poor and some 600 million Chinese still subsist on a monthly income of less than 1,000 yuan ($155) a month. Is this a prosperous and happy nation?

The job market for China’s ever-expanding pool of university graduates is so competitive that most graduates today are unemployed. As young people have flocked to urban metropolitan centres to search for employment, rural regions have been drained and left to decay. For millennia, China has been a society characterised by the extended family system like in India. In only a generation, this traditional safety net has been overturned leaving the elderly to rely on the state for marginal care. In the cities, young people have been priced out of the property market by a red-hot asset bubble as described above.

Isolated and unable to get ahead in a ruthlessly consumerist society, Chinese youth increasingly describe themselves through rap music and online chat rooms as living in a state of nihilistic despair. This state of mind is encapsulated by the online slang term neijuan (involution), which describes a “turning inward” by individuals and society due to a prevalent sense of being stuck in a draining rat race where everyone inevitably loses. This despair has manifested itself in a movement known as tangping (lying flat), in which the youth attempt to escape the rat race by doing the absolute bare minimum amount of work required to live, becoming modern ascetics in the process. This has hurt productivity, output and consumer spending, putting the whole economy into stress. This lack of consumer demand is affecting investment and growth. The HR departments of China’s corporations are wringing their hands in utter despair.

The psychology of modern Chinese society is undergoing a serious metamorphosis leading to a deep-rooted sense of apathy, cynicism and distress. These conditions mirror Chinese society in the mid 19th century when tangping was synonymous with lying flat on a bed smoking an opium pipe when opium found a home within societal consciousness in China. The British exploited this weakness and introduced Indian opium into China. The rest is history!

Lately, the May 2020 US ban on the sale of advanced microchips, their designs and the equipment and tools to make them have crippled not only China’s planned 5G rollout, but also its aircraft industry and almost all of its advanced technology and electronics industries. The US has physically blocked the two most advanced chipmakers in the world, namely, Taiwan’s TSMC and South Korea’s Samsung from selling advanced chips to China. Apple’s iPhone 13 uses a 5 nanometre (nm) chip, while China can still only make a 14 nm chip, which is still two generations behind the Apple chip. Despite this ban, China imported two, three and four-generation-old chips worth $300 billion in 2020.

Further, China faces a bipartisan consensus in the US to stall its rise to singular global economic supremacy. The US Congress recently passed a $250 billion Bill to provide government support to the US chip sector and the scientific sector. This was a break with the prevailing orthodoxy of non-interference from the government in US industry. The existential fear of China prompted such a shift in ideology in the US.

All of these challenges that Chinese supremo Xi Jinping faced in 2020 made him realise that China’s economic growth was rapidly slowing down. A new phase of reforms would be needed. When freer markets are allowed to direct capital to worthy investments, rather than state priorities and then boost the productive powers of industry and workers, growth will return to a healthier trajectory. But pursuing such policies would require Xi to relinquish control, which he is not prepared to do. He decided to go the opposite route and introduce greater control of the Communist Party in the economy.

This in turn led to greater curbs on the influence of billionaires like Jack Ma. It has swamped regulation on technology, education, financial technology and entertainment sectors. It has curtailed the ability of Chinese startups to tap foreign capital markets. It has cracked down on foreign cryptocurrencies. And finally, it has launched a campaign of promoting income equality. This actually implies reining in the wealthy and imposing tax and fiscal tools to root out corruption and foreign currency violations.

Finally, there is the emergence of a formalised Quad on September 24th, 2021and the AUKUS nuclear submarine pact inked a few days before that. This isolation of China in the world has enraged Xi. His immediate response was to test the will of the two weakest dominos on the side of his enemies, namely, India and Taiwan. With reference to India, China escalated tensions on the entire LAC by intruding into the Barahoti sector in Uttarakhand and into the Sumdorong Chu sector in Arunachal Pradesh. In addition, the border talks on Chinese withdrawal from Indian territory in the Depsang Plains in Eastern Ladakh, between the military commanders of the two countries broke down on October 10th. Bitterly worded communiqués were released by both sides after the talks. Furthermore, between October 1st to 5th, China sent over 150 warplanes into Taiwan’s Air Defence Identification Zone (ADIZ), in a bid to intimidate Taipei.

Apart from the above actions against India and Taiwan, Xi’s return to state-led intrusive policies is his internal response to the challenges he faces. Sensing an opportunity, his opponents within China ganged up against his increasingly authoritarian one-man rule. Xi has indirectly acknowledged he is locked in a power struggle with a rival political faction backed by former Chinese President Jiang Zemin. The admission can be found in recent charges related to sedition and state secrets issued on September 30th, 2021against former Chinese Public Security Vice Minister Sun Lijun, who was arrested in April of 2020.

What is unusual in Sun Lijun’s case is the explicit accusation of revolt against the leadership. Sun had “extremely bloated political ambition, vile political quality,” according to China’s anti-corruption agencies, the Central Commission for Discipline Inspection and the National Supervisory Commission. The indictments state that in order to fulfil his personal political goals, Sun groomed rebels within the Chinese Communist Party, spent much effort forming interest groups to control key government departments, and seriously undermined the unity and political security of the party, according to the allegations. He is accused of blatantly selling official posts and inserting his trusted minions in positions, which severely damaged the political and legal environment of the Public Security Ministry.

According to a report of IRIS, the French Institute for International and Strategic Affairs, Sun’s arrest is framed in the more complex factional struggle between Xi and his allies and the public security apparatus, which was, until recently, still serving the interests of its previous bosses like Zhou Yongkang, Meng Jianzhu and Luo Gan, all of whom were close allies of Jiang Zemin, one of Xi Jinping’s ageing predecessors. More specifically, Sun was secretary to Meng Jianzhu, a former minister of public security, and a close ally of Deputy Prime Minister Han Zheng. The latter belongs to the “Shanghai Gang” of Jiang Zemin.

Clearly, the internal angst in Chinese society and the effect of that on GDP growth has very logically forced Xi to look for means to divert the focus of China away from its growing internal contradictions. Added to this is the Quad and US moves to isolate China globally. This has got Xi’s goat and has pushed him to the brink of international adventurism. From an Indian perspective, this has both threats and opportunities. I emphasise opportunities because many exist in the ways and means to exploit the situation not through kinetic military means alone, but through asymmetric war to settle the issue once and for all. Is anyone in our election victory-obsessed polity willing to listen?