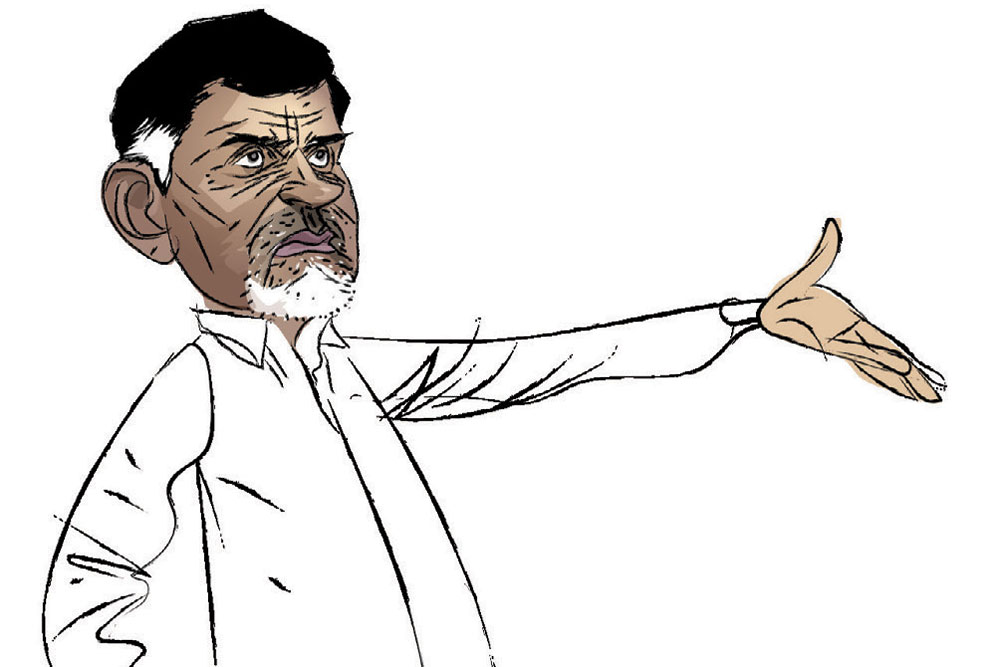 
Telugu Desam Party (TDP) leader N Chandrababu Naidu came to Delhi and tried without success to meet both Prime Minister Narendra Modi and Home Minister Amit Shah. He wants President’s Rule to be imposed in Andhra Pradesh after workers of the ruling YSR Congress attacked his party offices. Naidu eventually submitted a memorandum to President Ram Nath Kovind. MPs of YSR Congress also met in Delhi and told the media that TDP spokespersons used abusive language against their leader YS Jagan Mohan Reddy, and that is what made party workers angry. They claimed it was a spontaneous outburst. Though YSR Congress is not part of the National Democratic Alliance, they do support the Bharatiya Janata Party (BJP) on all major issues, possibly why Naidu finds no sympathy in Delhi.

Satya Pal Malik, the governor of Meghalaya and ex-governor of Goa, has become very vocal against what he terms the corruption of Goa’s Chief Minister Pramod Sawant. He is said to have made a written report about it. Both being BJP men, the party now has to find a way to address the issue. BJP could change the chief minister, but that might impact negatively when Goa goes to the polls early next year. Or, BJP could just take a stand that Malik’s motive is political vendetta and that there is no corruption.

Mamata Banerjee’s national ambition for her party, Trinamool Congress, is emerging fast. After extending their base to Tripura and Goa, the problem she faces is how to reach other states. Prashant Kishor, who strategised their state election victory, thinks that it is very difficult to revive Congress, and Trinamool can fill that vacuum. As a next step, Banerjee might induct important Congress leaders into her party. Also, the strategy is to revive local regional parties of different states and for Trinamool to ally with them. For example, in Goa, Maharashtrawadi Gomantak Party could be a potential partner, and in Punjab, it could be Amarinder Singh’s new party. Kishor is said to be focusing on this project.

To Unblock a Block

The impasse between the Maharashtra government and the governor over appointment of Members of Legislative Council (MLCs) is showing no signs of a resolution. The governor has not cleared the file but strangely the Nationalist Congress Party (NCP), part of the ruling alliance, criticised the delay. NCP then met the governor and changed the names in their quota. Chief Minister Uddhav Thackeray has complained to the Centre about the delay. In Bihar, names were cleared recently by its governor within 48 hours. So, he is asking why it is not happening in Maharashtra. They have also gone to court.

In Uttar Pradesh, there is no alliance between Congress and Samajwadi Party (SP) for the state election, but speculation never ends. Priyanka Gandhi, who is leading the Congress charge, has only announced names for 50 seats. Rumours are afloat about the delay in coming out with the entire list. Political circles in Lucknow believe she is still waiting to see if there can be some seat adjustment with SP as a strategy to stop BJP. Samajwadi leader Akhilesh Yadav is not very keen on the alliance. He is not sure whether Congress will be an asset or a liability.

The Next Party President?

Environment Minister Bhupender Yadav recently went to Saudi Arabia and met Crown Prince Mohammed bin Salman, who is the de facto ruler. It improved his standing in BJP because, usually, the crown prince is choosy about the foreign leaders he meets, and normally, they are only the ones at the top. It is being said that Yadav could be the next BJP president after JP Nadda.

The Communist Party of India-Marxist (CPM) party congress is going to be held in April. The big question is who the next general secretary will be. The Kerala lobby wants a change of guard and is actively pushing for Brinda Karat. Kerala Chief Minister Pinarayi Vijayan is close to both Prakash and Brinda Karat and is said to be behind this call for a change. CPM also faces the question of whether to continue to ally with Congress in West Bengal. Vijayan’s argument is that there are no electoral benefits in doing so. There is a feeling that incumbent General Secretary Sitaram Yechury is friendly towards Congress. That could be one more reason for Vijayan to want to have someone else.

Minority Affairs Minister Mukhtar Abbas Naqvi has another not so well-known identity—that of a writer. He has written fiction in Urdu and Hindi, besides penning lyrics. He, in fact, contributed to several campaigns of the Ministry of Women and Child Development.

News that Bangladesh Prime Minister Sheikh Hasina is going to Pakistan has upset the BJP central leadership. The party thinks that China is behind the move. Beijing is trying to get close to Bangladesh and loses no opportunity to undercut India. But while Pakistan has confirmed the visit, Dhaka is yet to do so. India is trying its best to stop the trip.