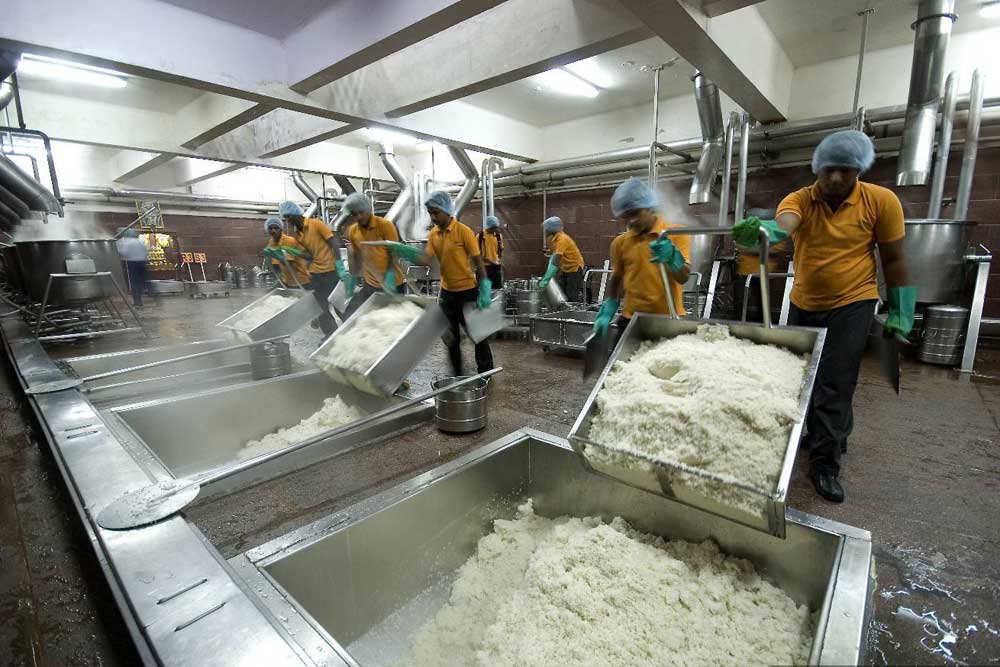 
NORMALLY IN ANY bout between vegetarians and non- vegetarians, your columnist will always be found in the corner of the meat eater. This, even though he agrees vegetables are far more nutritious and, if you were to be stranded on an island with an either meat or plant option until help arrives, it would be wiser to choose the latter. However, vegetarianism as an imposed political belief is as distasteful as forcing Hindi down the throat of South Indians even if they already know and speak it.

But when social media saw a debate this week over whether schoolchildren should be served non-vegetarian food in their midday meal, it was a little unclear who was in the right. This was because the way in which the issue was presented. A Hindu article had pointed out students in Karnataka were refusing to eat or, eating with reluctance, their midday meal because the organisation that had the contract, Akshaya Patra Foundation, a non-profit NGO initiated by the Indian Society for Krishna Consciousness, did not put onion or garlic in it which they believed would do unwholesome things to the mind. What was curious is that from the absence of these two vegetables, the online duel had switched orbit into vegetarian versus non-vegetarian. Asking Akshaya Patra to add eggs and meat seemed like activists using the controversy to push an additional point through.

Possibly in the light of the changed dimension of the issue, many came forward in support of the NGO. Like NITI Aayog CEO Amitabh Kant who tweeted, ‘I have visited several Akshay Patra kitchens. They are neat, clean, tidy & are providing nutritious hot food to school children. They are doing phenomenal work. I rate them as one of the most outstanding institution who do their work in a professional, simple, quiet manner.’ Or former Army Chief VP Malik who had this to tweet, ‘Why can’t those criticising Akshaya Patra start similar organization for providing ‘wholesome’ food to school children at their locations?’ In the Hinduarticle itself Karnataka’s principal secretary of education Umashankar SR was quoted saying, “Who is going to serve such a huge number of children if we cancel this contract?… The administration cannot function on the basis of philosophical arguments. I’ve told these activists directly—they have their heads in the clouds. I live on earth.”

Pragmatism, and cursory knowledge of Indian conditions, tells you he is right. Even if it is reprehensible that an organisation’s absurd ideas on human biology reflect in the food they give children, the absence of such food is worse. Efficiency and quality are good reasons in government works to compromise on taste, especially when students may get additives from home to make up for what is missing. But this question of what should be served to schoolchildren is going to return and what the government should do is give options. Have two or more caterers providing vegetarian, non-vegetarian or whatever passes for tamasic and non-tamasic meals. Fair competition has a unique ability to both simplify and clarify complicated questions of supply and demand.

A Biography of Nepotism