An Ashram with a View 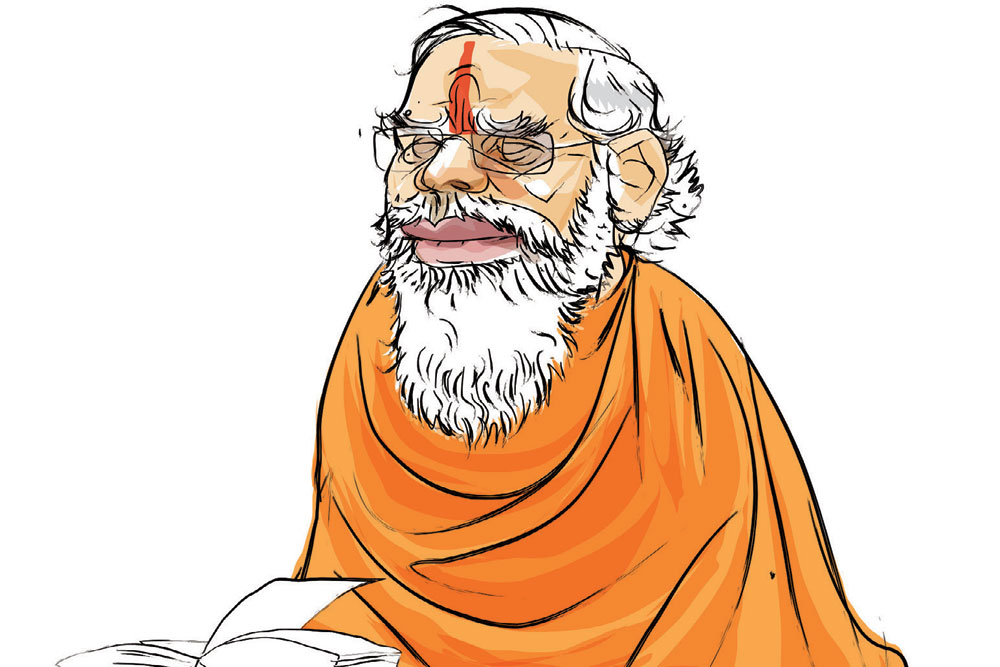 
There has been a lot of chatter ever since Prime Minister Narendra Modi began sporting a long grey beard. According to the whispers moving through the circles of the India International Centre and the Delhi Gymkhana Club, Modi would at some point like to renounce all power and move to an ashram in the Himalayas. He has been known to have a spiritual bent of mind, someone who, it is said, reads the Bhagavad Gita every day. But the Bharatiya Janata Party (BJP) and the Rashtriya Swayamsevak Sangh (RSS) will have none of it. They understand that Modi remains essential. Even for the 2024 elections, no one can replace him. But the gossip continues. It is said that Modi is quietly getting a small ashram built at Uttarkashi in Uttarakhand.

There is a little more than meets the eye in the anti-Hindi movement Kanimozhi has been trying to build up in Tamil Nadu. After the AYUSH ministry sent some circulars on Covid-19 in Hindi, Kanimozhi started a campaign against the use of Hindi in several districts. Many believe her brothers Stalin and Alagiri are
competing to be the party’s face for the state elections next year. Kanimozhi hopes to use this movement to emerge as something of a consensus candidate. Stalin isn’t quite pleased, but he can’t publicly criticise the campaign. Many Dravida Munnetra Kazhagam (DMK) insiders even wonder if a movement based on language politics is still relevant in the state considering how exposed the average Tamilian is to Hindi thanks to social media.

The reason behind Navjot Singh Sidhu’s departure from the BJP in 2016 was not unhappiness with the party but because he did not get along with the Shiromani Akali Dal (SAD) leadership. Although he joined the Congress in 2017, he is known not to get along with Punjab Chief Minister Amarinder Singh either. Sidhu has, however, continued to keep in touch with Narendra Modi. With the breakup of the BJP’s alliance with the SAD, everyone is keenly watching whether the former cricketer with the sharp tongue might once again jump ship and return to the BJP.

Rumours about his health have continued to pursue India’s Home Minister since he returned from hospital. Although Amit Shah has fully recovered and is back home at 7 Krishna Menon Marg, the rumours have not let up. Recently, it was being said that he had left for the US for treatment when he was actually attending an event on the Northeast via videoconferencing. A few days later, a WhatsApp group of home ministry correspondents began to light up with questions as to whether he had been readmitted to AIIMS—untrue again. Shah has apparently told his officers not to worry.

Odisha Chief Minister Naveen Patnaik has found himself in a peculiar position, that of resolving a marital discord. MP and Ollywood actor Anubhav Mohanty reportedly has a bitter marriage with actress Varsha Priyadarshini. He has approached the court seeking to dissolve his six-year-old marriage, but Varsha has filed another complaint of domestic assault and extra-marital affairs. The acrimony between the couple has grabbed headlines and often spills over on to social media. Patnaik is believed to have told Mohanty to resolve the rift as soon as possible.

Reshuffle on the Cards?

BJP President JP Nadda may have signed off on the recent list of the party’s national office bearers, but it is believed the names were finalised by Home Minister Amit Shah. There are big exclusions, such as Ram Madhav, Anil Jain, Vinay Sahasrabuddhe, P Muralidhar Rao, Uma Bharti, among others, but Shah’s close associate Bhupender Yadav has made it as general secretary. There is now speculation that a Cabinet reshuffle is on the cards. This could take place before the upcoming Bihar elections and Madhya Pradesh by-elections. Jyotiraditya Scindia has been waiting for this moment. Could Modi bring Ram Madhav, not a Rajya Sabha member yet, into the Cabinet too? The RSS, however, is believed to be not so keen on the idea.

Even when rumours of a BJP-Shiv Sena patch-up were making their way through Delhi, after former Chief Minister Devendra Fadnavis met the Sena’s Sanjay Raut, in West Bengal, something else was unfolding. Sena’s West Bengal head Ashok Sarkar has gone on the offensive against Governor Jagdeep Dhankhar. He issued a statement saying the Governor is behaving unconstitutionally and that he can’t speak against an elected state government. Bengal’s Sainiks have even started a campaign against Dhankhar. The grapevine is now abuzz with talk of Uddhav Thackeray being in touch with West Bengal Chief Minister Mamata Banerjee.

There is an interesting side story to the recent rejig of BJP office-bearers. Karnataka’s RSS man and the BJP’s National General Secretary BL Santhosh is believed to have played a key role in the entry of the new inductees, especially two significant individuals from Bengaluru, CT Ravi and Tejasvi Surya. The former is the minister for Kannada and Culture and a member of the Vokkaliga caste. The latter is the 28-year-old first-time MP from Bengaluru South and national head of the BJP’s youth wing. Neither is known to get along with Chief Minister BS Yediyurappa. This is curious because there is a state cabinet reshuffle on the cards.